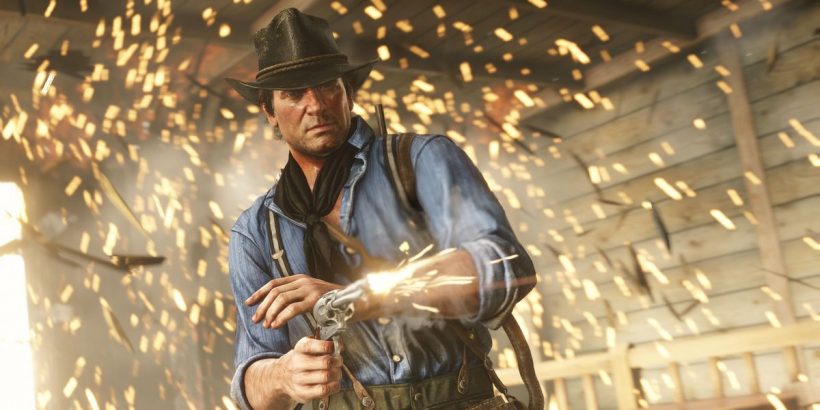 One of the most appealing parts of Red Dead Online is dressing your character up. Everyone wants to make sure that their cowboy is the rootingest tootingest ruffian in the West. Rockstar regularly rolls out season passes to tempt players with sweet outfits, snazzy belt buckles, and other new customization options. One of these recent additions has stirred up a little controversy, and inspired outlaws to take to thrift shopping in local stores.

There’s no cowboy more admirable than Arthur Morgan, the protagonist of Red Dead Redemption 2. A few of his buddies show up in the Red Dead Online world, like Sean and Trelawny, but none of the main characters make an appearance.

Arthur’s starting outfit is probably his most iconic one: a blue shirt, overalls, and sturdy boots. For some reason, our Collector friend and fortune teller Madame Nazar has found it, and is selling it to Red Dead Online players for 52 gold bars (55 gold bars currently go for $19.99). The outfit is called “The Haraway,” and it was originally a reward in the second Outlaw Pass, which ran all the way back at the end of 2019. This means a big chunk of players have been waiting and hoping for this outfit, as well as some garb from the rest of Dutch’s gang.

So it’s no surprise that players, some of whom are also dissatisfied with Red Dead Online’s sedate update pace, are upset about an older outfit getting such a high price tag. So, they’ve crafted their own version out of the clothes available for Red Dead’s in-game dollars. It’s not particularly difficult, especially since Arthur isn’t the sharpest dresser in the West.

It raises an interesting problem that Red Dead Online has yet to solve. What do meaningful player cosmetics look like, especially as the years march on and the pressure continually mounts to top the last big-ticket item. In GTA Online, that’s an easier task — just give players another flying rocket motorcycle or submarine or, I don’t know, a tank that can also turn into a gun. Red Dead Online hasn’t found its equivalent, although the developer continues to release interesting story missions and updates from time to time.