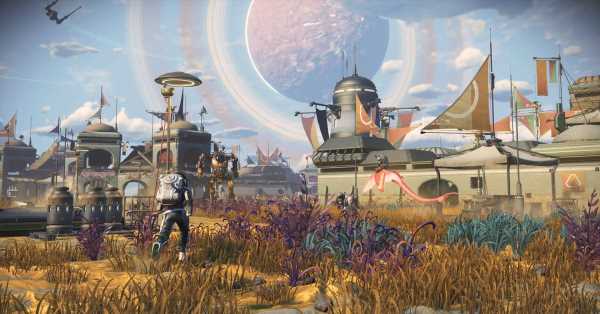 Developer Hello Games gives No Man’s Sky players another free update with Frontiers, which introduces planetary settlements to the massive procedurally generated space exploration game. Hello Games likens the new settlements to the spaceport city of Mos Eisley from Star Wars, where intergalactic travelers can gather and grow their community.

No Man’s Sky’s new settlements, available Wednesday in patch 3.6, are tiny towns with NPC inhabitants, some of whom have their own problems. Players can help these settlements grow and even oversee them; Overseers can construct new buildings, solve citizens’ problems, make decisions, resolve disagreements, and provide security against threats.

Plus, you can hang out with aliens in a Star Wars-style cantina.

Alongside settlement building and town management come improvements to base building. Hello Games is introducing a “clean, minimal, contextual HUD to place, scale, rotate and recolour base parts.” Players will be able to pick up and move base parts, duplicate parts, and “build impossible new structures in free place mode.”

A new trailer for No Man’s Sky Frontiers offers a peek at other improvements coming in Wednesday’s update (like enhanced visual effects and multicolored nebulae), but you can read the full patch notes below for greater detail.