After spending some time with No Man’s Sky VR (on Vive), there are three things that I admire about this game. First, and most impressive, is the sheer thrill of space travel, writes Colin Campbell.

I don’t mean the floaty, intergalactic kind of virtual star-tourism. I mean the gritty feeling of being on an alien planet, hopping into a one-person spaceship, and blasting off. In the VR version of this space-exploration game, I enjoy the whooshy sensation of high speed, high altitude acceleration.

I also love the neat perspective of a receding planetary surface behind me, and that glorious oooomph of breaking through the membrane of atmospheric gunk, into the clarity of space. Before me, I see new planets to discover.

This is VR at its most compelling, putting me in fantastical places and giving me viewpoints that I can never expect to attain in real life.

Second, is one particular ground-based tool. No Man’s Sky is about jumping from one planet to another, exploring surfaces on foot, and gathering resources. I use various gadgets to unlock minerals and other stuff. But the device I like best of all is a bore. I mean, it’s used for boring holes in the ground.

This is available in the basic non-VR game, but somehow blasting holes and tunnels in the ground feels more exciting in VR. Although I only played a short demo, I feel like I’ll spend a lot of time with the final game, just tunnelling, creating underground spaces.

My final point is more technical. No Man’s Sky is a complicated game that’s been through years of iterations and tweaks. As a virtual reality user interface problem, it’s clearly an order above most VR games, with its panoply of tools and its range of activities.

It took me a while to figure out the controls, but once I understood where the designers at Hello Games were going, I began to appreciate the work they’d done. I won’t say the controls are intuitive, exactly, but in the context of VR, they seem to work.

No Man’s Sky is a game that demands long hours of play, so comfort is important. I’m curious to see how much time I’m going to want to devote to this, when it comes out this summer, as part of the game’s Beyond update. 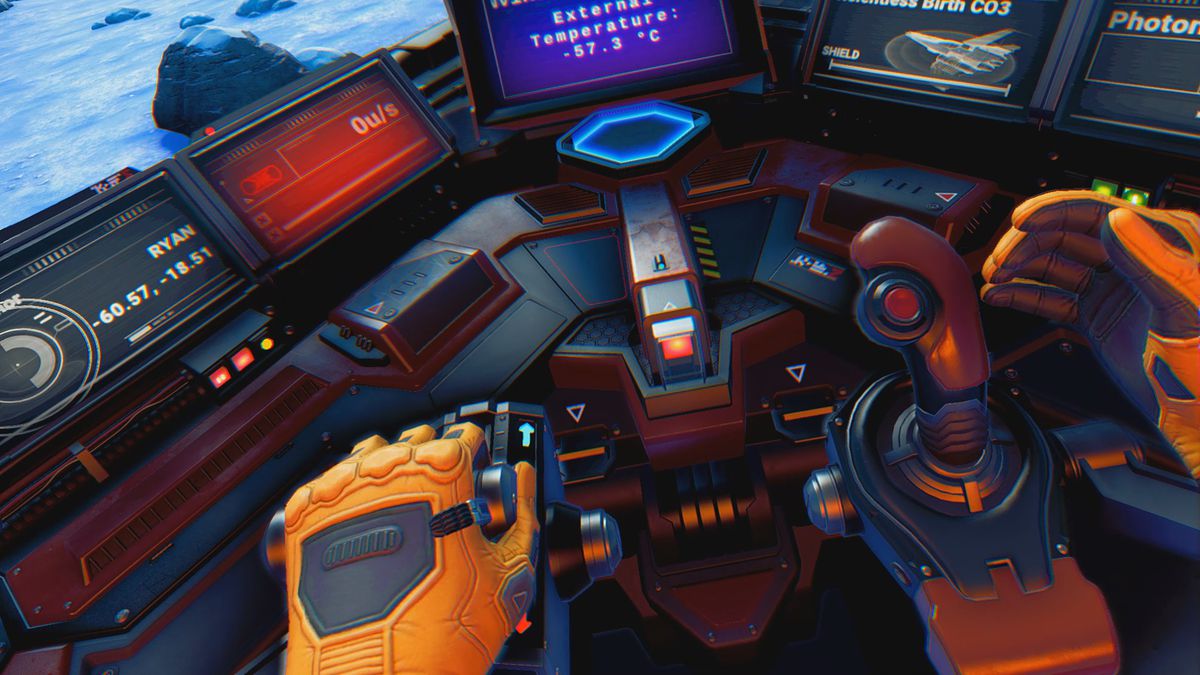 Now, over to Mike McWhertor, who’s been playing the PSVR version ….

Experiencing No Man’s Sky in VR on a PlayStation 4 was a very different kind of trip, writes Mike McWhertor.

I played, sitting down, with a pair of PlayStation Move motion controllers. I teleported my spaceman from place to place, reaching back to pull a gun from my shoulder holster, and aiming, shooting, and punching at precious minerals to gather resources for my trek. It was all a bit weird, fiddling with a holographic pop-up display on the digital gloves that mimicked my hands in No Man’s Sky’s virtual world. But it worked; Hello Games made this lightspeed jump to VR gracefully.

I had developer Sean Murray in my ear the whole time. He condensed what he said was an hours-long ramp up of tutorials meant to teach players No Man’s Sky VR in just 20 minutes. He showed me how to teleport — the go-to movement scheme for first-person VR — around an alien world, where I could instantly move into a dark cave or on top of my personal settlement, giving me two very different perspectives on this world. He showed me how to interact with objects like healing stations and characters: by reaching out with my left hand Move controller, “gripping” by pressing the rear trigger button, and pulling on an invisible cord. It felt good. Most of No Man’s Sky VR feels good.

The closest I came to not feeling good while skipping around a planet and launching my personal spacecraft toward the stars was during my ship’s initial take off. I gripped the flight control stick with my right hand, pushed forward on the throttle with my left, and rocketed off the planet’s surface. For a brief moment, my stomach sank. Murray instructed me to look right and left, and I saw the planet pull away. I was soon in space, and everything seemed briefly dangerous. But No Man’s Sky is generous in letting me fly into a spaceport and dock without dying, and virtually gripping my ship’s controls seemed to help ground me.

Hello Games is offering alternate control schemes that don’t require Move controllers. Players will be able to freely move around space with a DualShock 4, if they want to. And players should use No Man’s Sky’s VR mode as an excuse to revisit the game. Experiencing it in virtual reality was refreshing, edging us closer to the grand promise of No Man’s Sky that Hello Games continues to deliver on in free updates.