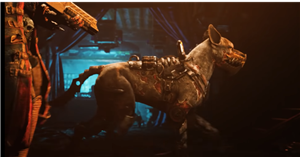 Necromunda: Hired Gun takes place in the Warhammer 40K universe, but it’s far removed from the central high stakes wars of the setting. Instead, you hangout in the criminal hub city of a Necromunda hive city as a bounty hunter, looking for contracts. You also have a dog, so that’s nice.

Hired Gun is a fast and frantic first person shooter. The protagonist gets around with a grappling hook and wall sliding powers. Over time, players grow more powerful due to weapon enhancements and mods. A new trailer shows off the dog, which is always appreciated, but it also gives a much closer look at what the RPG elements in Necromunda look like.

First of all, there’s cosmetic upgrades — a player hangs a charm off their gun and changes the color of their cyber mastiff’s prosthetics. There are also companion skill trees so players can prioritize their power. Then, things get more modular when it comes to the weapons themselves. A player can swap out elements of their gun, upgrading bits and bobs, until their starting weapon, like a shotgun, is superpowered and ready to cause some chaos.

Players head out on missions, so finding the right gear and upgrades for a scenario is crucial for the big bounty hunter pay days you want. After a mission, the bounty hunter heads back to a central safe hub where they can upgrade their gear and pick up new missions.

Over time, the player will need to choose between the warring factions of Necromunda. Luckily, you can cut your way through any problem with a power launcher, and another assortment of powerful sci-fi weaponry. Necromunda: Hired Gun is available on June 30 in stores, and July 1 on digital storefronts, for Xbox One, Xbox Series X, PlayStation 4, PlayStation 5 and Windows.