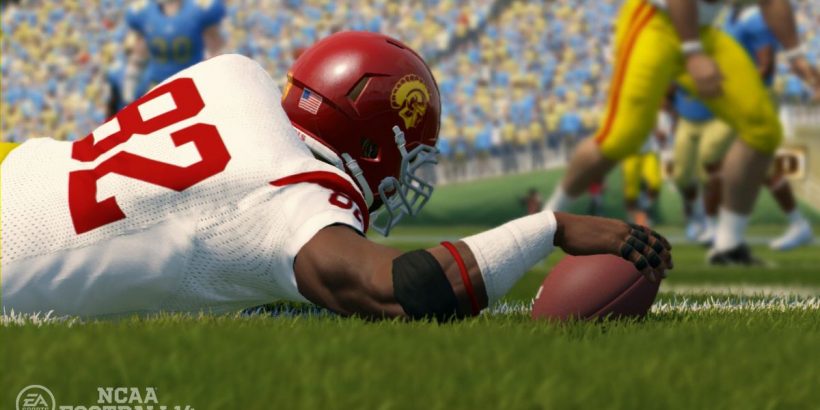 For college football fans wondering what the NCAA’s new policy on athlete endorsements means for a video game series, the answer is — well, nothing specific yet. But in a statement Thursday, EA Sports said that it’s aware the NCAA has rolled back restrictions that got the much-loved NCAA Football franchise in so much legal trouble, and that signs point to the series’ resumption sometime soon.

The full statement from EA on Thursday morning:

We are watching the recent developments regarding student-athlete name, image and likeness very closely. It’s still very early stages at this point, and we plan to explore the possibility of including players in EA SPORTS College Football. For now, our development team is focused on working with our partners at CLC to ensure the game authentically showcases the great sport of college football and the more than 100 institutions signed on to be featured in our game.

EA Sports is referring to the interim policy, taking effect on July 1, that permits college athletes to make money from endorsements and sponsorships while remaining eligible. Previously, the total ban on any college athlete making money from the use of their name, image, and likeness is why EA developers, over the 20-year history of the original NCAA Football series, based the roster on real-world players but removed their names prior to shipping the finished version. Behind the scenes, EA had lobbied the NCAA for an exception allowing them to pay players for their appearance in video games, but was rebuffed.

A trio of lawsuits, brought by current and former college football and basketball players, ended up forcing Electronic Arts, the NCAA, and its licensing partner into a $40 million class-action settlement, which also saw the cancellation of the NCAA Football series in 2013.

Earlier this year, EA Sports announced it was working on a new game called EA Sports College Football, and was prepared to go forward without using real players. Still, the label noted that it and the Collegiate Licensing Committee were watching as the NCAA grappled with the NIL issue — an issue pushed by the fact that state legislatures in California, Georgia, and other big-time college football states had passed or were considering laws that forbade the NCAA or any college authority from sanctioning athletes who profited from the use of their names, images, or likenesses. A unanimous ruling from the U.S. Supreme Court on June 21, repudiating the NCAA’s long-standing prohibition of all payment to student athletes, was the tipping point.

The NCAA’s interim policy regarding NIL would seem to clear the way for a video game using real college players. Of course, there would need to be some structure for compensating them. This is probably why, for now, EA says it will “explore the possibility of including players in EA Sports College Football.” In the professional sports it adapts for video games, EA buys a group license from a players’ association, entitling them to the use of everyone within it. No such organization exists yet for college football players.

Still, the first roadblock to the existence of the kind of college football video game that fans remember and love has been removed. Players can now be compensated for the use of their names in such a work, and Electronic Arts, whose fiscal year 2021 revenue was $5.6 billion, and whose 2013 legal settlement amounted to roughly $400 per player, has the cash to compensate them.