It demands you take it seriously, from the very first hunt; there is no time to get your sea legs back if you’ve stepped away. The game will eat hours of your time with little to no progress if you don’t treat every monster like it might be the hardest one you’ve ever faced.

But, if you’re willing to meet Iceborne on its terms, you’ll have some of the most satisfying in-game victories of the year.

Monster Hunter World: Iceborne is a $40 continuation of Monster Hunter: World. Iceborne won’t let you in if you haven’t already spent 30-50 hours beating World’s story. Once you’re in Iceborne, you’ll want to set aside another 20-30 hours of monster hunting time to see it all.

Iceborne offers around 20 new monsters and variants for seasoned hunters to battle. Most are returning beasts from previous Monster Hunter games, but some are completely new to the franchise.

The Hoarfrost Reach, a frozen tundra with hidden hot springs, is the new locale. It’s huge, and hunters can bounce between the arenas within it very quickly, which can help make fights feel a bit more varied. Each environment has different tools to play with: you may encounter sloping landscapes, hanging icicles, a half-frozen lake, or vents that launch you into the air.

It’s a massive expansion, but its primary offering isn’t content, but difficulty. I learned this the hard way. 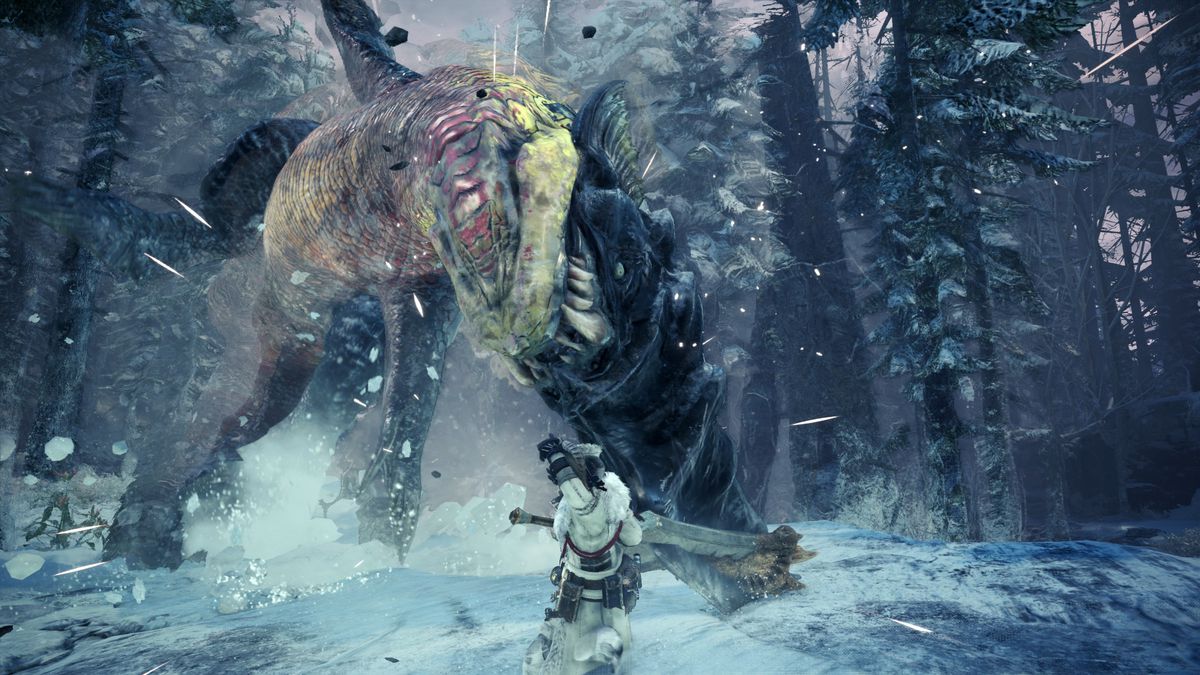 A Beotodus dives into the snow, taking a Hunter down with it.
Capcom

My first hunt in Monster Hunter World: Iceborne takes me into the Hoarfrost Reach. Like most Monster Hunter: World missions, I set out on an expedition only for an enormous beast to interrupt me.

Beotodus leaps out of the snow, and suddenly my mission parameters change. The exploration can wait, first I needed to hunt this monster. Beotodus is a new monster in Iceborne, but falls into the very samey Piscene Wyvern family of Lavasioth and Jyuratodus from Monster Hunter World.

I stand in the snow, barely paying attention to the new beast in front of me. I’m wielding a great sword, a weapon I’ve never been good with but always wanted to learn. I figure the start of a new expansion is as good a time as any. I take a couple big swings, get a couple of good chops in … and Beotodus knocks me flat on my ass in record time.

Maybe the great sword isn’t the weapon for this fight? How about other weapons I know I like, that I haven’t used in ages? The Longsword? I go down just as fast. The Charge Blade? My Palico carts me back to camp, injured. How about the Sword and Shield? I get in a groove, but my time is up. Beotodus escapes the area, and 50 minutes have passed.

My handler then gives me a new mission to specifically hunt Beotodus. I get ready to take the battle more seriously; I haven’t played Monster Hunter: World in a few months, but surely I can hunt this damn snow-shark after nearly 200 hours and dozens of elder dragons already under my belt.

But I’m too slow, fumbling through too many sword and shield combos. 50 minutes later, I fail out again just as the beast is limping away. I return to give it one more go after nearly throwing my controller across the room. I’ve spent two hours on this single monster, wasting my time on a type of hunt I don’t even enjoy.

I decide to do it right. I switch back to my hammer — the one weapon type I’ve used to hunt every monster in Monster Hunter: World — my old faithful. I rearrange my armor, my bonuses, and my perks to maximize my chances of success. I buy a special meal from the Meowscular chef. I buy back into all the Monster Hunter Bullshit; giving myself dozens of seemingly menial boosts to help guarantee my success.

With my trusty hammer in hand, I take down Beotodus in 35 minutes. After nearly three hours of bashing my head against the first beast in the expansion, I have an epiphany: Monster Hunter didn’t waste my time; I did.

Not for the faint of heart 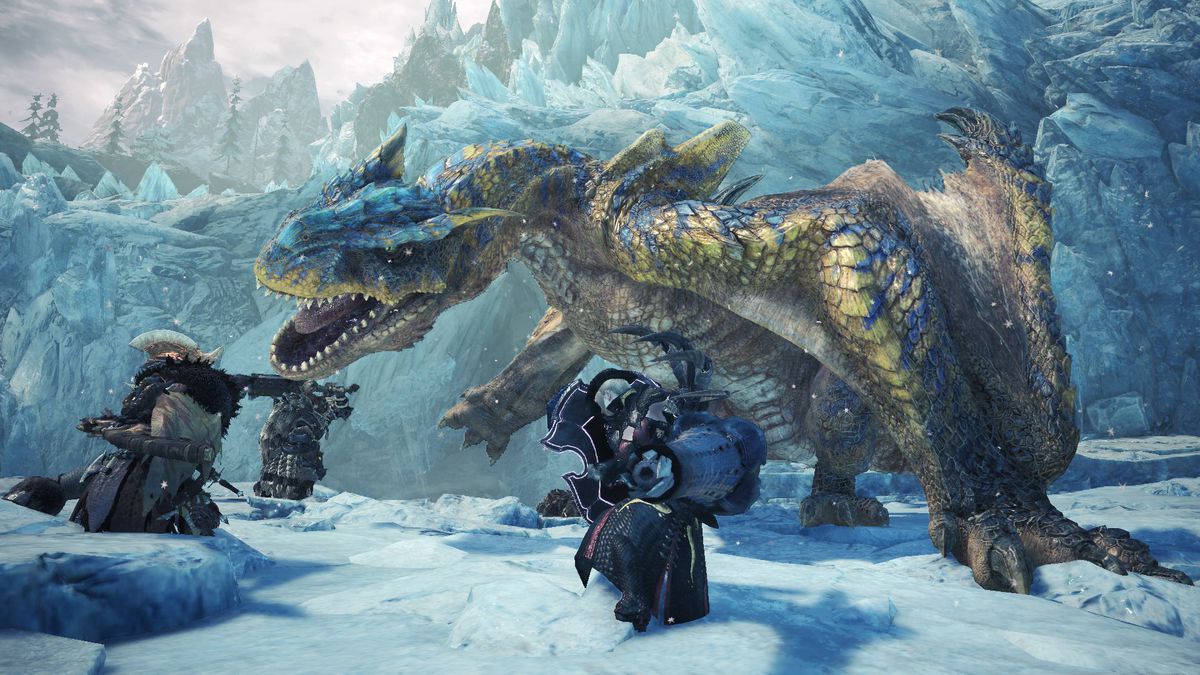 Tigrex battles a group of Hunters in the Hoarfrost Reach.
Capcom

Capcom has advertised Monster Hunter World: Iceborne as the Master Rank expansion since it was first announced. It’s the difficulty level designed for players who’ve spent the past year obsessing over Monster Hunter, similar to G Rank from other games in the series. Someone, like me, who beat the main story and kept playing for another 150 hours to master the skills required to succeed, should feel right at home. So what went wrong?

But I didn’t come in with my usual level of strategy. My head wasn’t in the right place, and I paid the price with my time. When I focused, and treated the boss with the respect it requires, I took it down with no problems. After Beotodus, I didn’t fail a hunt for another 10 hours of gameplay, and that’s when things became even more difficult.

The most challenging hunts yet 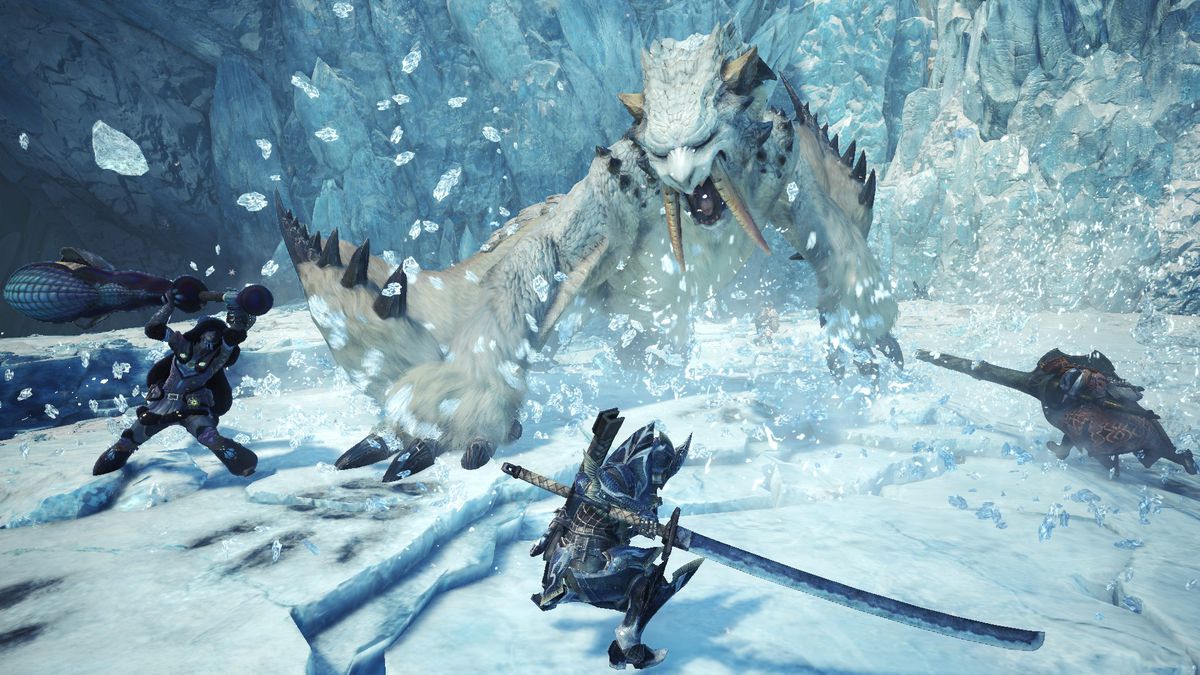 Barioth slings ice at a group of Hunters.
Capcom

After I passed Beotodus, the bane of my Monster Hunting existence, I obsessed over Iceborne. Every new monster was a thrill because it felt dangerous. If I wanted to go on a new hunt, I needed to carve an hour out of my day. The difficulty forced me to continue engaging with all the little systems Monster Hunter offers. If I forget one thing, it all crumbles, and my hunts get that much harder.

In my fight with Barioth — a wyvern with saber-tooth-tiger-like tusks — I ran out of Hot Drink. Without it, my max stamina started to disappear in the frozen tundra of Hoarfrost Reach. I chose to push on, not wanting to waste time collecting peppers to make more. It was a stupid mistake that nearly cost me the hunt. But when I was firing on all cylinders, I dodged every beast’s swings and shaved 10 minutes off my average hunt time.

Glavenus is one of my favorite new fights in Monster Hunter World: Iceborne. It’s a two-legged beast with powerful jaws and a sword for a tail. The beast is tough, but something clicked for me while fighting in. When I plunged my carvers knife in to collect its pieces, I felt like I’d accomplished something great without the struggle of failure. The fight wasn’t easy, I could simply feel my improvement.

Iceborne wants you to take it slow, to cherish the fights, and to feel the danger with every swing of a monster’s tail.

When I lost, I almost stayed knocked on my ass, pouting that the game is too frustrating — more punishing than the base game ever was. But instead, I took Iceborne’s hand, got back up, and it showed me one of the most rewarding video game experiences I’ve had this year.

Monster Hunter World: Iceborne will be released Sept. 6 on PlayStation 4 and Xbox One. The game was played on PS4 using a final “retail” download code provided by Capcom. You can find additional information about Polygon’s ethics policy here.