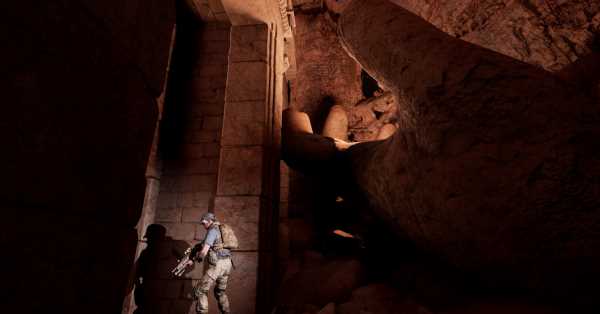 In House of Ashes, the upcoming third game of the Dark Pictures Anthology, players get to work their way through another short but intense multiperspective horror narrative. The game’s protagonist is Rachel King, a Marine played by High School Musical’s Ashley Tisdale. House of Ashes is about King on a mission in Iraq in 2003.

Polygon recently spoke with the anthology’s executive producer Dan McDonald and saw some narrative and gameplay footage from the upcoming installment. Rachel’s situation quickly gets complex; her ex-husband shows up while she’s in a new relationship, her team is searching for WMDs that never existed, and they get ambushed. The fight awakens something supernatural that pulls both the American and Iraqi fighters down into an underground ruin from Sumerian myth.

“From a theme and location point of view, we knew we wanted it to be military. We knew we wanted to link this specific kind of threat to a desert location,” said McDonald. Game director Will Doyle’s research led the team at Supermassive Games to set the game in Iraq in 2003, due to a cluster of story potential in real-world legend and myth. “We’ve talked to lots of people from an Arabic point of view, to make sure the script we’ve written is good,” McDonald said. “We’ve had script doctors check it from a military point of view to make sure it’s good.”

However, McDonald continued, the game’s main focus is supernatural horror. “The Iraq War, as a setting for us, is not what the story is about. It’s where they start, but quite quickly [the main cast] is in a different location; they’re trapped underground and there’s something otherworldly going on.”

According to McDonald, the team has attempted to implement fan feedback about the first two titles in an effort to improve House of Ashes. “We go through a process whenever we finish each game, to collate [all feedback and criticism] and look at it. The difficulty for us is, in this franchise, each game is almost finished before the next one comes out. So we need to listen to that feedback and work out how we can force it into the next game.”

Many players of Little Hope, for instance, critiqued its linear narrative, which had very few interesting branches. It was a step down from the first Dark Pictures game, Man of Medan, but one that the team has learned from. “We had some challenges in the Little Hope story. At one point during development, [the characters] were always together,” says McDonald. House of Ashes, as a result, splits the characters up and keeps them in the dark more often. There are also some nice technical changes to the formula. The camera is less locked into specific angles, characters move faster, and there are difficulty settings for each player to make things as tense as they can handle.

In researching fan feedback, Supermassive’s designers also realized they’d been a little too clever with hiding the clues and breadcrumbs that hinted at the greater Dark Pictures world. McDonald admitted that there are still clues that fans haven’t found aboard the Ourang Medan. “I think we made them too obscure — you know, numbers and stuff,” he said. “It’s not something you could really work out without someone pointing it out to you, which … we’re not going to do.”

House of Ashes is set to be released later in 2021, on PlayStation 4, PlayStation 5, Windows PC, Xbox One, and Xbox Series X.