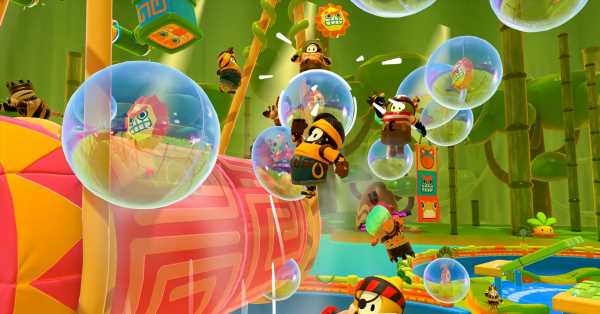 Fall Guys: Ultimate Knockout’s fifth season is almost here, and it will take players to a colorful new location: the jungle.

Fall Guys developer Mediatonic revealed season 5 of its bumbling battle royale game in a livestream on Monday, announcing that the update will go live Tuesday, July 20.

The new jungle-themed content coming to Fall Guys will feature obstacles like giant swinging logs, a lost temple, and mechanical rhinos. There will also be some gameplay changes, including a new way to team up with your friends. Mediatonic will “be experimenting with new ways to play together, including limited-time Duos and Trios Shows throughout Season 5,” the studio said in a news release.

Previously, Fall Guys has featured stages that would break players up into random teams for specific courses and a “Squads mode” where players grouped up in teams of four.

The naturalistic theme is a large departure from the game’s fourth season. For season 4, the beans bumbled through a neon world with ’80s vibes. Now, fans will swap out a discotheque for the jungle. New challenges include plenty of nature-themed activities from lily pad hopping to treetop traversing.