Like its last post on Elective Mode, the Diablo 4 development team revealed potential changes to the way the series handles items. A new blog post from lead systems designer David Kim touches on item affixes, stats, and the removal of the super powerful Ancient Legendaries.

Blizzard will add new affixes to items in Diablo 4. These affixes upgrade skills you already have or increase your damage resistance to a particular element. However, you’ll need to hit certain thresholds of three new stats to activate these affixes: Ancestral, Angelic, and Demonic Power. 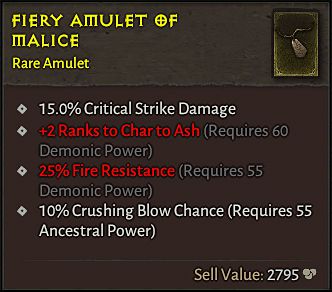 For example, Blizzard showed off an amulet called the Fiery Amulet of Malice. It has a 15% critical strike chance and three affixes. There’s a 10% chance to land a Crushing Blow, only active when the wearer has 55 or more Ancestral Power. The other affixes aren’t active in the example tooltip, because the wearer doesn’t have the requisite 55 or 60 Demonic Power.

The goal of this major change is to give players more agency in how they build their characters. A new item isn’t just a stat stick designed to increase your power. Instead, each new item presents you with choice. If you upgrade for stats, you may lose some Demonic Power, and therefore an affix that really makes your build sing.

This plays into another major change for the franchise. Attack and defense stats are now only on related items. If you want to increase your attack, you’ll need to change out your weapons. If you’re looking to bolster your defense, you need to find better armor.

This removes some of the frustration from Diablo 3 of finding a great new sword that makes your hero far too easy to kill. But Blizzard clearly states in the post that only picking items based on stats won’t be the optimal way to play. However, it’s still a viable choice for players who don’t want to fuss with all the stats and affixes.

The studio also declares that items are only a piece of the puzzle for Diablo heroes. If you want to truly increase your power, you’ll need to upgrade your skill ranks, character level, talent trees, the end game progression system, and the items you wear. Power comes from everywhere in Diablo 4, a key difference from Diablo 3.

Finally, the studio revealed that it’s removing Ancient Legendaries from the game. Ancients used to be very rare, super powerful versions of Legendary items. Instead, there’s a new, yet unnamed consumable item to customize late-game builds. This new item will drop from destroyed enemies with a random Legendary power attached. Players can then attach the Legendary power to any non-Legendary item.

The goal here is to create more unique builds for players. According to Blizzard, the best Rare items in the game are still useful in the end-game. It seems that players can make items even more powerful than basic Legendaries with this new system, but with more choice than the previous Ancient system allowed.

In the post, Blizzard clearly indicates that all of these changes are very early, and might not even make it into the finished game. The studio is still looking for feedback on these changes, and will update players on further in-development features soon.

GM to invest $2.2 billion to make electric trucks and SUVs at Detroit factory