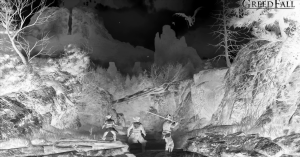 GreedFall was a 2019 RPG release that flew under the radar for many people, but became enough of a cult classic to sell two million copies. The game found success due to its classic western RPG staples like dialogue trees, romanceable companions, and a complex, long-running narrative. GreedFall put the player in the role of De Sardet, a customizable protagonist who could be either male or female and who was on a quest to a new land called Teer Fradee. On Wednesday, publisher Nacon announced that a sequel is on the way for 2024 called GreedFall 2: The Dying World.

GreedFall 2 is set to focus on story and player choice, similar to the first installment, and has the player take the role of a native inhabitant of Teer Fradee. While in the first game, we played as a colonizer, this time we’ll play as an indigenous protagonist who has been brought to the continent of Gacane, which is ravaged by war, plague, and political conflict. The player must regain their freedom and stop the man at the head of this colonialism effort through violence, diplomacy, stealth, or some combination of those tactics.

Developer Spiders is returning to helm the project. “In this new chapter, players will explore the old continent with its bigger and more diverse environments. They will meet new companions and new factions, and I hope they will have unforgettable adventures,” said studio founder and director Jehanne Rousseau in Wednesday’s announcement.

It’s still a while yet before we’ll get to see more of a concrete look at GreedFall 2, but it’ll be interesting to see how the success of the first game influences the second iteration, which had both compelling elements and a myriad of small technical errors. This time, we may be getting a more polished and experienced take on the formula.