Watch Dogs Legion has reportedly been leaked, and is allegedly set in a “near-future, dystopian version of London.”

Reported by The Nerd Mag, a listing for the game was seemingly leaked by Amazon UK.

The product description on the page reads “Watch_Dogs Legion is set in a near-future, dystopian version of London. It’s a post-Brexit world in which society, politics and technology have changed and altered London’s fortunes. London is one of the most iconic cities in the world and has had a massive influence on all of Western Culture for centuries… London makes total sense for WD, as the city has one of the highest surveillce [sic] levels in the world making this the perfect playground.” 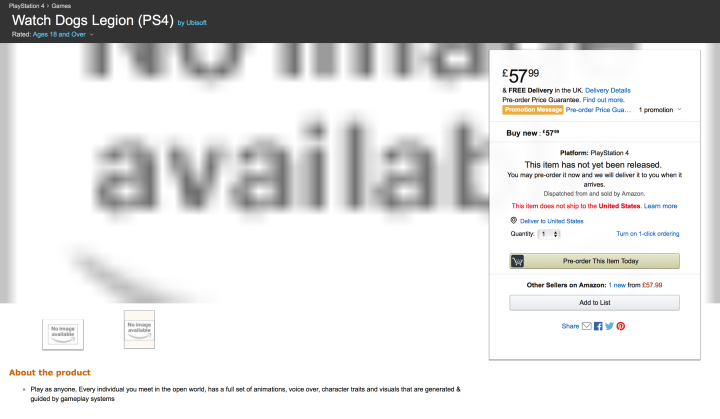 The “About the product” description gives more information on gameplay, saying players can assume the role of any NPC, noting “Every individual you meet in the open world, has a full set of animations, voice over, character traits and visuals that are generated and guided by gameplay systems.”

Kotaku claims the leak is accurate, saying players will “… see different things at different points in the game depending which NPC you’re playing as.” While no release information was given on the page, it is listed as a PS4 game, and is likely to also be released on Xbox One and PC. IGN has reached out to Ubisoft for comment.

Last year, prior to E3 2018, Walmart Canada similarly leaked a bevy of games, including Gears 4, Rage 2 and more. While still unconfirmed, it seems likely Ubisoft will officially reveal Watch Dogs Legion next week, giving us more information on the upcoming title.