The Viotek GFT27DB (See it at Amazon) is a 27-inch monitor that features a 1440p resolution, 144Hz refresh rate and a 1ms response time. It uses a TN panel to achieve its fast response time for buttery smooth gameplay, and it offers FreeSync technology to prevent tearing from a mismatch between your monitor’s refresh rate and your GPU’s output. While it is not among the few monitors stamped with Nvidia’s seal of approval for G-Sync compatibility, I can confirm that it does indeed play nice with G-Sync when manually enabled.

TN panels are a popular choice with gamers for their speed, but the chief downside of a TN panel is poor color reproduction. However, the Viotek GFT27DB uses a TN panel with a wide color gamut to combat this traditional TN drawback. TN displays are generally less expensive than VA or IPS panels too, and the Viotek GFT27DB at $329.99 is one of the least expensive 27-inch, 1440p displays you’ll find. I put the display through its paces to see how it performed with games and if it delivered on its promise of improved color accuracy. 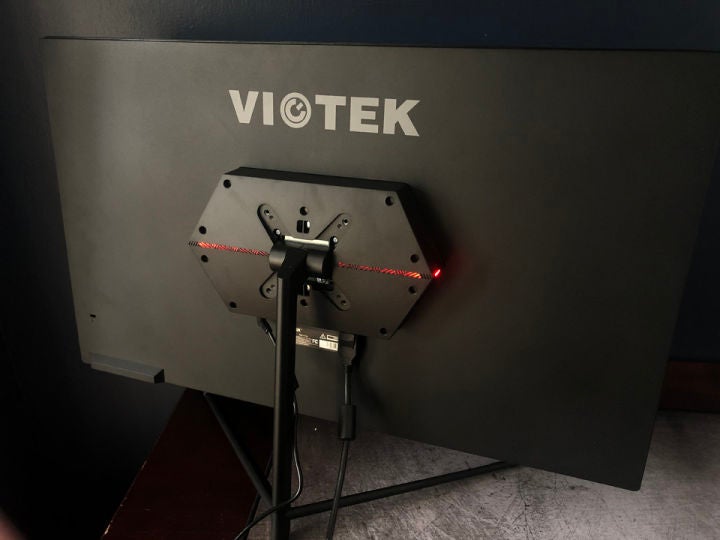 The display is compact and doesn’t require much real estate. The display is thin, measuring only 0.7 inches thick, and the screen bezels are thin, too, at only 0.3 inches wide on the sides and 0.7 inches wide along the bottom. And the three-footed metal base doesn’t take up much room on your desk. 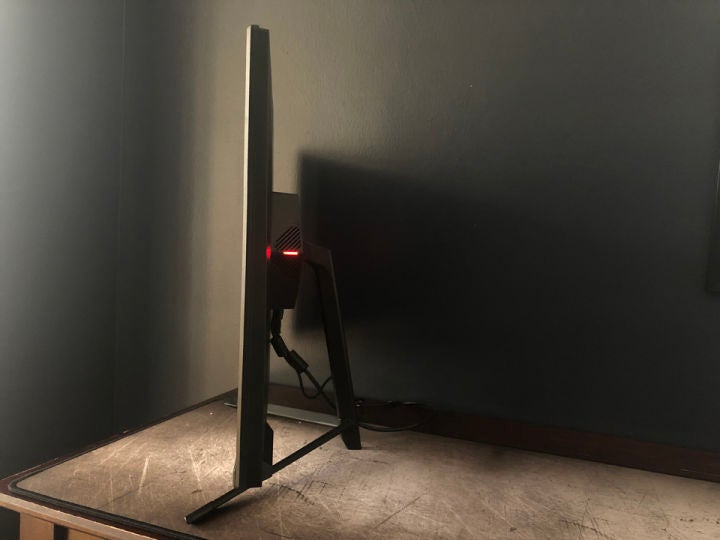 On the bottom edge of the display are five buttons, one to power on the display and four to control the OSD. Using the buttons to navigate the OSD is highly unintuitive; I would much rather have a small joystick on the back for moving around the OSD than need to remember which button selects an option, which button moves me back a level, and which buttons move me up and down through the menus.

Though difficult to navigate, the OSD is fully featured. In addition to the standard brightness and contrast settings, it lets you adjust individual red, green and blue levels as well as hue and saturation levels.

There’s also a low blue light setting, but I found it to be overkill and not as effective as Windows’ built-in Night light setting. The OSD also offers six picture-mode presets: Standard, Text, Movie, Game, FPS and RTS. I found most to be too extreme; you are better off tweaking the image manually to your liking. 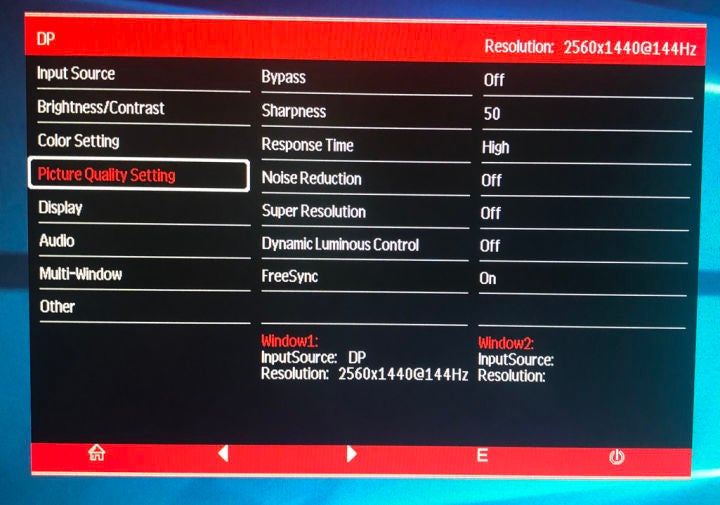 Port selection is decent. All of the ports are located on the back of the display. You get one DisplayPort 1.2 port, three HDMI ports (two HDMI 1.4 and one HDMI 2.0), and a headphone jack. Noticeably absent are USB ports. And the headphone jack is a pain to access; it faces down on the back panel with the rest of the ports. It would be much more convenient if the headphone jack was located on the side of the display. The display has stereo speakers, but they are terrible, sounding tinny and weak. 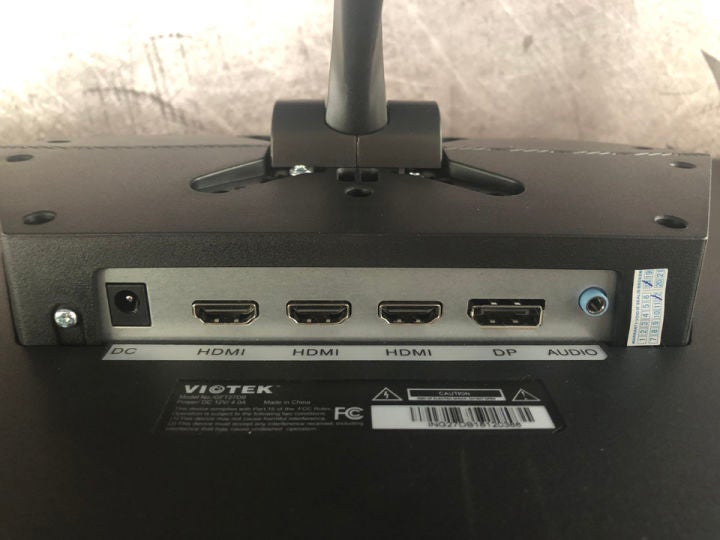 I used Lagom LCD monitor test pages to measure performance including gamma, black and white levels, color gradient, and response time. Gamma was a tad low at 2.0 on the gamma test (2.2 is preferable) but within range of acceptable. On the black level test, 20 grays squares should be visible against the black background and I was able to see all 20, a rare feat for any display but particularly for a TN panel, which generally have a poorer contrast ratio compared with VA or IPS panels.

On the white saturation test, I was able to see 10 of the 12 light-gray checkerboard patterns against a white background, which is about average for this test. On the gradient test, I saw no banding as the gradient pattern transitioned smoothly from black to white and vice versa. On the response time test, I witnessed minimal flashing with the display set to 144Hz refresh rate and 1ms response time.

Next, I fired up CS:GO and Overwatch and was not surprised to discover that this fast TN panel handled both games with ease. I enabled FreeSync and then manually enabled G-Sync for my Nvidia-based testbed. Both games exhibited smooth movement with no ghosting, tearing or stuttering.

Overwatch is a good test for a gaming display because of its fast, frenetic action, but it’s also a good test for color reproduction because of how colorful the different maps and characters are. A TN panel can appear dull and washed out, but that is not the case with the Viotek GFT27DB. Overwatch looked bright, vibrant, and detailed. Outside of games, the display showed rich colors and deep blacks when viewing videos and photos. The excellent color accuracy of this display makes it an outstanding general-purpose monitor in addition to its intended purpose as a fast TN panel for gamers.

Getting this level of color accuracy in a TN panel is remarkable and makes this display suitable for gamers who might also like to dabble in content creation. With its rich colors and very un-TN-like color accuracy, you might mistake it for a VA or IPS panel. Yet its fast 1ms response time makes it an unmistakably fast TN panel. 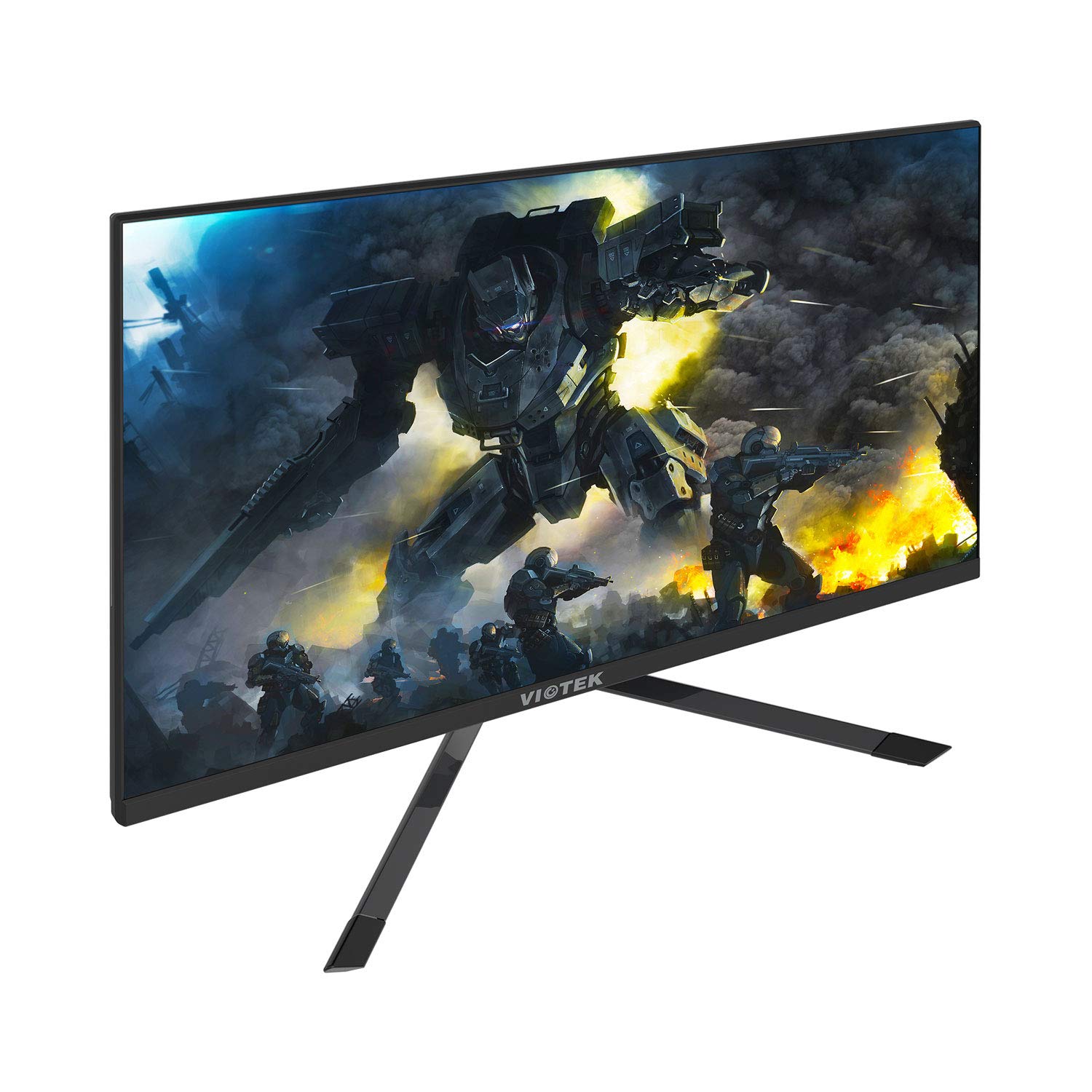 Since a 27-inch display at 2560×1440 is the sweet spot for gaming right now, the Viotek GFT27DB resides in the sweet spot of that sweet spot. The design is basic and the display is wobbly, but it combines speed and accurate color reproduction at a great price.