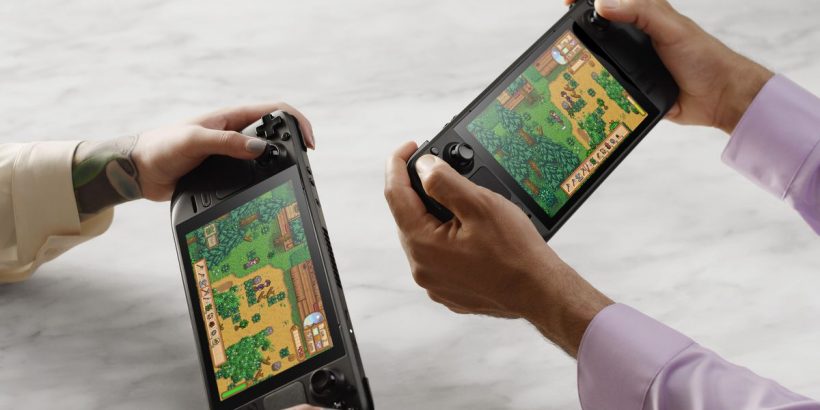 The Steam Deck is a new handheld device from Valve for playing PC games on the go, the company announced Thursday. The Nintendo Switch-like device is set for release in December starting at $399.

Previously rumored as the “SteamPal,” the Steam Deck is a portable PC that’s slightly larger than the Nintendo Switch. It features a 7-inch touchscreen, two thumbsticks, a D-pad, and a four-button layout. There are also two trackpads — one on either side of the machine, under the thumbsticks — to allow for increased precision. The Steam Deck has eight triggers on its back: four on the device’s shoulders and four more where the ring and pinky fingers rest.

The Steam Deck will run games from players’ existing Steam libraries. Players will simply log into their account, and their friends and catalog should follow them onto the handheld. The Steam Deck is capable of running PC games on its own hardware, without the power of the cloud. Videos released by Valve show people using the Steam Deck to natively play games such as Baldur’s Gate 3, Crusader Kings 3, Disco Elysium, Hades, and Star Wars Jedi: Fallen Order. Players can also purchase a dock that allows the Steam Deck to run on a TV.

Inside, the Steam Deck boasts an accelerated processing unit (APU) built by AMD. Its CPU is based on the company’s Zen 2 microarchitecture and tops out at 3.5 GHz. The GPU contains eight RDNA 2 compute units running at up to 1.6 GHz, delivering peak performance of 1.6 teraflops. The system packs 16 GB of RAM and a microSD card slot, allowing users to expand upon the built-in storage. The Steam Deck’s 7-inch screen is an LCD with a 16:10 aspect ratio and a 60 Hz refresh rate at a 720p resolution of 1280×800. The Steam Deck also features a dual-band 802.11ac Wi-Fi radio — it’s compatible with 2.4 GHz and 5 GHz networks — and Bluetooth 5.0 for controllers, accessories, and (unlike the Switch) audio.

At launch, the Steam Deck will be available in three models with different storage options. Valve says there are no performance differences between the three versions — aside from the speed of the flash memory, which will provide varying read and write speeds.

The $399 base model offers 64 GB of storage in the eMMC format. The next model up costs $529, and packs faster storage courtesy of a 256 GB PCIe 3.0 NVMe SSD; it also comes with an “exclusive Steam Community profile bundle.” The top-tier Steam Deck, at $649, includes a 512 GB NVMe SSD that Valve refers to as “high-speed,” although it is still a PCIe 3.0 drive. In addition, this model’s screen features “premium anti-glare etched glass.” The unit comes with an exclusive carrying case and exclusive virtual keyboard theme, on top of the cheaper models’ bonuses.

Steam users will be able to reserve any of the three Steam Deck models (for a fee) starting at 1 p.m. EDT on Friday, July 16 — as long as they made a purchase on the Steam Store at some point before June 2021. If not, they’ll have to wait until 48 hours later.

The 40-watt-hour battery inside the Steam Deck offers two to eight hours of gameplay, according to Valve — a wide range that likely depends on how taxing the software is. For audio, the Steam Deck features dual microphones, front-facing speakers, and a headphone jack. The entire machine weighs 1.47 pounds, and measures 11.73 inches long by 4.6 inches high by 1.93 inches deep. (For comparison’s sake, the base model of the Nintendo Switch with both Joy-Cons attached weighs just 0.88 pounds, and measures 9.4 inches long, 4 inches high, and 0.55 inches deep.)

The Steam Deck’s official dock allows users to connect the handheld to an external display like a TV or computer monitor. It has three USB ports: one is USB 3.1, and the other two are USB 2.0. It also offers two video outputs — DisplayPort 1.4 and HDMI 2.0 — and an Ethernet jack. Courtesy of USB-C DisplayPort (aka DP Alt Mode), the dock will support video output in 4K resolution at 120 Hz or 8K at 60 Hz, although considering the power of the Steam Deck’s components, it’s exceedingly unlikely that it could natively run games at those resolutions.

Valve will sell the dock separately; there’s no word yet on a price or release date. The company did specify in an interview with IGN that the Steam Deck will be compatible with “any USB-C dock that you can buy off the shelf.”

The Steam Deck also functions as a normal computer, allowing players to “install and use PC software,” according to Valve. For instance, users will able to browse the web and watch streams as well as play games. On the software side, the Steam Deck supports Steam features such as chat, notifications, cloud saves for games, remote play (allowing users to stream games from their home PC to the handheld), and the Steam Store.

It’s worth noting that the Steam Deck doesn’t run Windows, which is by far the most common operating system for Steam users. Instead, it runs the Linux-based SteamOS, version 3.0, which Valve says is “built with Steam Deck in mind and optimized for a handheld gaming experience.” SteamOS 3.0 includes Proton, a “compatibility layer” that allows Windows games to run on Linux “without any porting work needed from developers.”

However, the Steam Deck is not a closed device, so Valve won’t stop users from doing what they want with it, such as installing Windows and the Epic Games Store. And now that Xbox Cloud Gaming is available in a web browser, the Steam Deck could presumably be used as a portable Xbox Game Pass machine.