Multiplayer survival game Scavengers was announced more than a year ago. Described as the spiritual successor to Halo 5: Guardians’ Warzone mode, the player-versus-player-versus-environment game blends multiple FPS genres together to create something new.

I got the chance to play an early version of the game at this year’s E3 in Los Angeles. In motion, the game type — which the developers at Midwinter Entertainment dub “co-opetition” — actually solves a huge problem with the survival multiplayer genre.

When you’re playing a game like PlayerUnknown’s Battlegrounds or Fortnite, there can be a tendency to hunker down and keep a low profile. That’s especially true when playing solo, but applies to groups as well. Making it into the ranks of the final few dozen players left alive guarantees that you’ll have at least a few good gunfights before the match is over. Going too hard, too early, tends to paint a target on your back, so tactical players want to move quickly and quietly to the final circle, and then stay put.

That tendency to stay hidden creates a pacing problem. All the action in a battle royale game tends to be concentrated towards the end of a match. Not every player or group can survive long enough to get there, so not everyone has a whole bunch of fun every time they drop in.

Boss Key Productions’ Radical Heights was, in my opinion, the most successful game to address that intrinsic pacing problem. Rather than a single shrinking circle, Radical Heights used a grid system to create multiple concentrations of players all over the map. Instead of one massive battle, it created several smaller battles in different parts of the map. Sadly, Boss Key was wound down before it could really get its feet under the game.

Scavengers approaches the design problem from a different direction. In the fiction of the game, the destruction of our moon turns Earth into a frozen wasteland. The last remnants of civilization live in orbit aboard a single space station, with a malevolent artificial intelligence named Mother to watch over them.

Every once in a while, Mother will launch teams of humans onto the surface of the Earth to scavenge for supplies. Whoever brings back the most supplies wins a reward. During our demo, players formed up into teams of four. The best strategy was to have one each of the four character classes available, which includes support-focused healers, melee fighters, stealthy long-range snipers, and close-range shotgunners. The final product will have many more classes.

After landing on the planet, players must gather weapons and supplies from the environment. Anything they can’t immediately use can be turned into scrap. Playing as the healer class, I was able to quickly turn my scrap into an assault rifle, which allowed me to offer mid-range fire support.

From there, players must attack smaller outposts filled with human bandits or mobs of mutated wildlife. Doing so earns additional weapons, scrap, food, and hides that can be used to upgrade your gear. Early on, the game’s tension comes from the constant race to upgrade your party, MOBA-style, before the other teams on the map can outmatch you. Sharing resources is key, and is as easy as dragging and dropping items to other players from inside the inventory menu.

Over time, combat escalates, with players assaulting larger, more permanent structures built into the map. Midwinter tells me that the goal is to have players learn the environments over time, while also throwing random encounters in their way to mix things up. 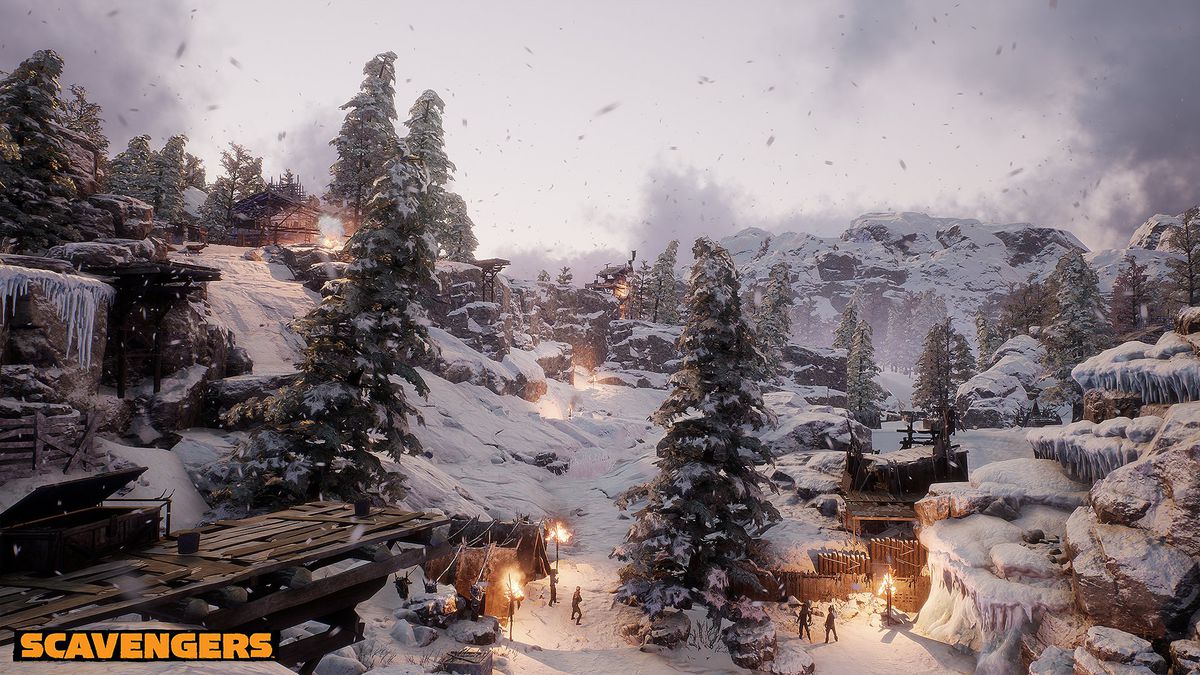 One of those random elements is the game’s weather system. Huge frozen tornadoes scour the landscape, becoming more violent as a match goes on. Only by huddling near a fire can players stay warm enough to avoid losing their health. Savvy teams will pile on warming buffs, and use those storms as cover to move undetected past other, more heavily-armed groups.

The result is a game where it always feels like the action is on the move, a game where maneuver is much more important than defense. In Scavengers, you always have an objective to reach, an enemy to shoot, and a reason to communicate and work together with other players.

In each match, a final battle takes place around a proper spaceship, which Mother sends down to retrieve the resources that players have collected. That’s when the world of Scavengers throws everything it has against you with wave after wave of enemies running in from all over.

There’s a final wrinkle, though.

It’s up to players to decide if they want to work together with the other teams that make it to the spaceship, or if they want to gun them down as well, steal their resources, and earn even more affection from Mother.

Fans who are interested can submit an application to join the playtest version of Scavengers right now. Midwinter tells me that the free-to-play game will add more players over time. Final launch details and timing is still being worked on.