I’ve been playing Overwatch regularly since its launch three years ago. Zenyatta is my main — I like playing him in an aggressive support style, balancing support positioning with precision aiming. When I booted up Overwatch on the Nintendo Switch yesterday, I immediately queued up for support, chose Zenyatta, and quickly got into a game.

That’s when everything went bad.

I spawned into a game without a character model. A few of my teammates were there, but the rest of my six-person squad were also missing their character models. There was a red-orange blob in their place. Sure, that seems fine. I guess.

I could still move and play, even without a character model, although I couldn’t see or hear anything I was doing. When my team clashed with the opposing side in the middle of the map, most of their team, too, showed up as balls of light.

And that was just the beginning. Unfortunately, the Nintendo Switch just couldn’t handle the game I love so much. 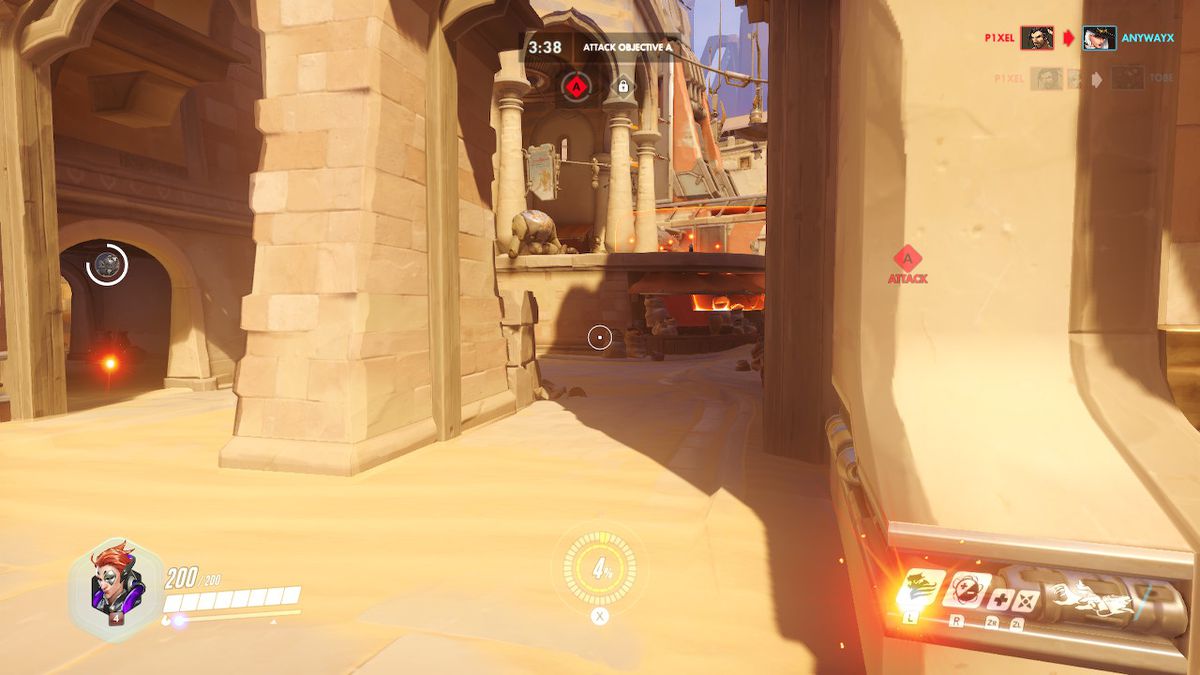 See all those red dots? Those are other players
Blizzard Entertainment via Polygon

It was about 30 seconds into the match before my character model and the others appeared. This happened throughout my hours-long Overwatch session, and you can see a time everyone was an orb in the image above. Sometimes only a few teammates were orbs, while at other times we were all orbs.

Initially, I played Overwatch on the Switch while docked, using a Pro Controller — but I also played the game using Joy-Cons and in handheld mode. The Pro Controller is easily the best option for controls; I found it a bit snappier than the Joy Cons, which produced noticeable button lag, for some reason.

The lag was bad enough that I missed a lot of my shots as Zenyatta, and also struggled to place my healing and damage orbs. I switched over to Moira, who requires less precision. I was able to do OK with Moira, despite the lag.

Motion controls felt unwieldy using the Joy-Cons, and I struggled to play with any precision in that way. That said, it’s an entirely new way to control a video game for me — I’m used to playing with standards gamepads or keyboard-and-mouse controls, and missed the whole Wii experience — so I don’t feel comfortable saying the controls don’t work. It might be a fun option for someone who has more practice with playing first- or third-person shooters this way.

Weirdly enough, the game performed best in handheld mode. Overwatch on Switch runs at 30 frames per second both docked and undocked, but I found it struggled to run smoothly when playing docked, especially in the game’s large team fights. You know, the times when you need that performance the most.

It’s unfortunate for me that I enjoyed my time best in handheld, because it caused motion sickness–induced nausea, something I typically only experience with bumpy third-person games. This is, of course, entirely a me problem and not a fault with Overwatch itself, but feels worth noting for folks that experience similar issues. Overwatch is a game with a lot of visual feedback — ultimates popping and colors everywhere — and it can become overwhelming on a small screen, which is, in my unscientific opinion, what caused the nausea. The ongoing issues with character models and fuzzy textures, complete with frame rate drops, didn’t help at all, either.

I understand the appeal of Overwatch on Nintendo Switch. It opens up the game to a new set of players. The Switch makes the game portable, sort of; you still need a good internet connection to play. But much of what makes Overwatch such a great game is lost on the Switch.

If you can, you’re better off playing the game elsewhere. If you can’t play elsewhere, maybe skip this one completely, unless Blizzard releases a performance update that fixes the many issues with this initial release.