Finding out what’s in the next room of a dungeon crawler is always a strong reason to keep going. Who knows what’s behind that door?

Each step farther into the depths can mean a new puzzle, an unexpected fight with a monster, or even treasure. Creature in the Well, a new indie game coming to Switch, Windows PC and Xbox One on Sept. 6, adds a kinetic twist to the genre. Instead of hacking and slashing my way through various monsters, each new room discovered in the game is an electrified, pinball-inspired puzzle. I use my weapons to bounce balls of energy around small chambers in an experience that feels more like Breakout than The Legend of Zelda.

I play as Bot-C, an ancient robot on a quest to stop a massive sandstorm from destroying a small town. To do so, I have to venture into a long dormant weather machine to power it back up. As I explore the derelict halls of the compound, I’m taunted by a massive, boney creature that’s taken up residence inside its dark depths. As I learn more about myself and the nature of the machine, the creature curses me and tries to scare me into leaving. Every so often, it even drags me down into its dark labyrinth and I have to fend off its attacks.

While this sounds like a typical hack and slash story, just about everything else is part of a genre mashup I’ve never experienced before. Outside of the titular creature, there are no other enemies I have to contend with while passing through the rooms of the weather machine. Instead, each room is a small, kinetic puzzle that I must solve to move forward.

And those areas are all set up like pinball machines. The goal is to whack balls of energy around strategically placed contraptions located in each room. Whenever each bit of machinery is hit, it soaks up energy from the ball, which then sends the ball ricocheting away in the opposite direction. Hitting each contraption enough times fully powers it up, and removes it from play while giving my character some energy in the process. Puzzles are cleared once I power up each machine. The energy I gather from each puzzle is used to open up doors that allow me to plunge deeper into the complex.

Some of the rooms are simple, and I only need to hit each contraption to clear it. A well-placed swing can knock one ball around a room that careens into each bit of machinery in a way that feels satisfying. Other sections require exact timing or quick reflexes to dodge attacks from other autonomous machines. The environment is always my enemy, not monsters. Well, there’s the one monster, but you know what I mean.

The most fun and challenging areas are the puzzle rooms that require precise aim to hit all the targets in the room in a certain order, or in a limited amount of time. These challenging areas are the most engaging, and it takes a while for me to learn where I need to stand and how I need to attack the ball to get a precise angle of attack to surpass each challenge. The effort is worth it just to score that perfectly aimed strike that knocks everything into place.

The rhythm of play

However, not every room is mandatory to clear, which can be a relief if you don’t feel like twisting your brain on one of the harder puzzles. If I leave a room for later, it’ll be marked on my map as incomplete. If I ever run low on energy, I can easily travel back to those puzzles to try again from the game’s main hub.

The design of each of the game’s areas comes full circle when the creature drags me down into the machine for “boss fights.” Each of the game’s eight areas ends with one of these encounters, taking all the various design ideas from that section and upping the ante with the inclusion of the creature.

I still have to hit a series of obstacles the same way I would any other room. The difference is that many of these machines pose some kinds of danger to me, such as lighting my ball on fire and hitting it back to me right away. This requires me to volley it back like a dangerous tennis match, until the contraption is defeated. Other mechanical hazards might set the ground ablaze or cause an explosion if I accidentally hit the wrong machine. And this is all happening while the creature sends balls of energy at me that I must destroy with attacks of my own. These tussles can get intense, as I’m often trying to dodge attacks while also trying to solve a puzzle. 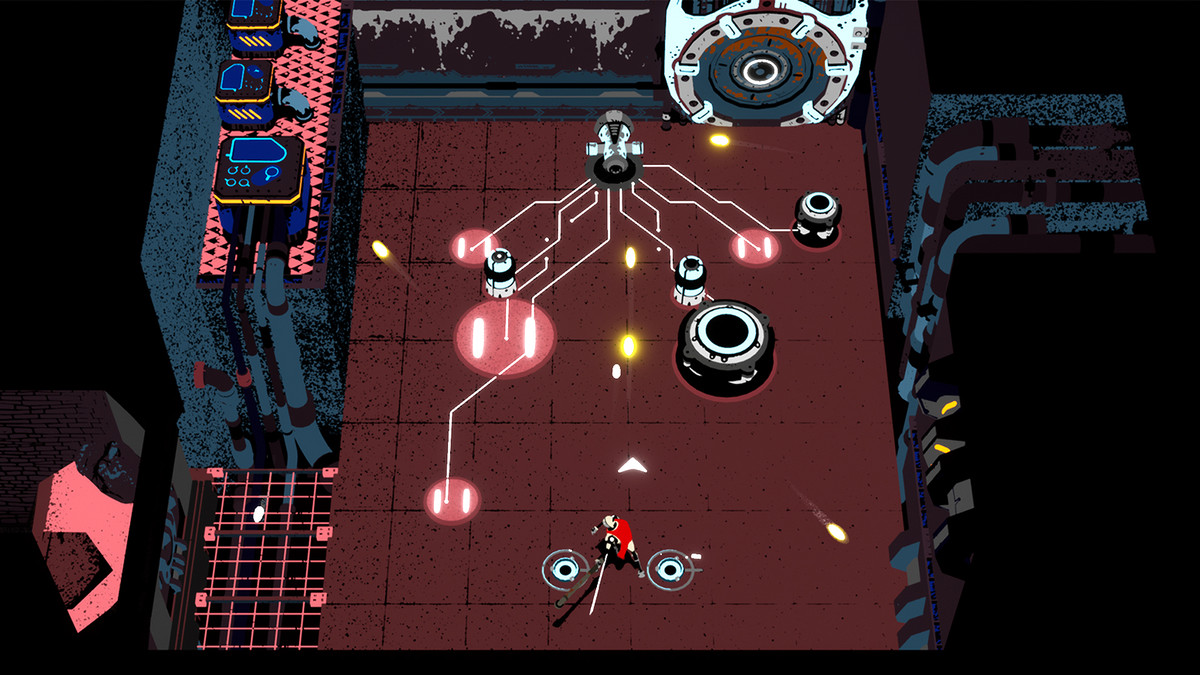 Creature in the Well plays like no other hack and slash I’ve ever encountered. It has the familiar trappings, like discovering hidden rooms, uncovering new outfits, and even locating dazzling new weapons. But I don’t use my shiny new axe to defeat more difficult foes, instead I use it better solve complicated, kinetic puzzles. That’s because new weapons don’t raise my stats, they offer unique perks like slowing down time to let me better aim by shots. It’s a clever way to breathe new life into a genre that can sometimes feel pretty tired.

The greatest challenge posed in Creature in the Well isn’t the single nemesis that stalks me throughout the game, it’s the puzzles surrounding it. I’m not required to fight harder as I get further into the game, but think smarter. While Creature in the Well looks like a game that would test my might, instead it tests my wits.

It’s dark, a little bit funny, and it delivers puzzles that are more satisfying to solve than defeating standard dungeon crawling monsters.

Creature in the Well will be released Sept. 6 for Switch, Xbox One and Windows PC. The game was reviewed using a final “retail” Steam code provided by Flight School. You can find additional information about Polygon’s ethics policy here.