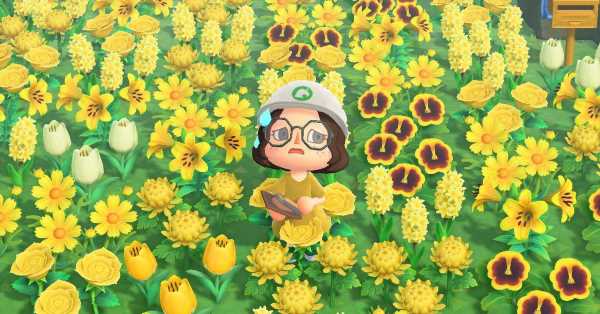 The Animal Crossing: New Horizons 2.0 update has re-introduced a handful of popular features and characters from previous titles, like New Leaf. Brewster’s cafe is back, Kapp’n trips are on, and ordinances are once again a feature. These ordinances allow a player to further customize their island, for a tidy sum of 20,000 Bells — allowing a player to change the price of goods, or when villagers awaken or go to bed, among other things. But one ordinance has had some, erm, unintended consequences.

The “Beautiful Island” ordinance does a handful of things, most of which are quite useful for the discerning New Horizons player. It prevents cockroaches from infesting your home (a problem for anyone who was away for a while). Players will also no longer fish up any trash, weeds will grow less often, and — here’s the kicker — villagers will water flowers more often. Flowers already grow extremely quickly, and the Beautiful Island ordinance basically makes them grow … even faster.

As a result, the “Beautiful Island” ordinance has had the opposite effect of “beautification,” for some players — instead spamming them with oceans of unassailable flowers.

Flowers have always been a core, if a bit contentious, design item in Animal Crossing: New Horizons. There are eight different breeds of flowers, in a handful of colors, some of which only appear through careful hybridization. As each island has one endemic species of flower, getting just the right varietal, mix, and placement takes some effort. All of this can really pay off, as when arranged artfully, flowers can make an island gorgeous.

But flowers are also a pain to manage or, heaven forbid, eradicate. To move or remove flowers, each must be dug up manually via shovel; and, of course, as these shovels are breakable items, pruning a huge area means going through several. On top of that, flowers don’t stack in the inventory — even if they’re the same type and color — nor do they sell for any kind of meaningful profit. And if you’re going quickly, you might accidentally pick a flower instead of digging it up, thereby forfeiting two inventory spots: one for the blooms, one for the plant.

Choosing this ordinance could be especially devastating to anyone who had just finished containing a large flower spread during pre-update island prep. Perhaps a generous player will step in to help eradicate these flowers? In 2020, a player who styled themselves as a weed puller, WeedCo Weed Removal Services, offered their free weed-clearing services. (Alternatively, if you’ve got heavy pockets, Nookazon has had plenty of new offers for “dig up flowers,” for a fee.)

Redditors pointed out that the ordinance does nearly the opposite of what they’d prefer, with regards to weeds and flowers. Though weeds can be annoying, and lower the star-rating of an island, they can look beautiful when incorporated into designs, and are far easier to pick up. Redditor Even-Vermicelli-8101 put it succinctly: “The way flowers multiply like rabbits normally in this game I’m not surprised. I’m glad I decided not to even think about enacting that ordinance.”