The Advanced Rules Miscellany (ARM) Kickstarter was scheduled to run for only two weeks, and is the fourth one of what EN World has dubbed a “quickstarter.” The ARM is both a softcover book and a PDF, and EN World stated the digital product “will be delivered as soon as the Kickstarter campaign ends.” This quickstarter is a very cool concept, as it gets a new product to the backers swiftly so they can begin using it right away.

The ARM sourcebook is a slim 27 pages and contains new rules for “archery contests, random battlefield events, rules for herbalism, exciting new chase rules, and new hirelings to help you on your adventures.” The five modules will each cover a specific rule set, divided up into the categories of Archery Contests, Battlefield Events, Give Chase, Hired Hands, and Nature’s Remedy.

Archery Contests will give DMs rules for creating and running archery tournaments. Battlefield Events suggests some randomicity for combat encounters, such as pit traps, natural wild magic surges, innocent bystanders wandering onto the battlefield, and more. The Give Chase module details new chase rules, and includes three new chase complication tables, as well as a new chase mapping method. Hired Hands adds nine (nein!) new hirelings (“apothecary, cook, interpreter, minstrel, porter, scholar, squire, teamster, and torchbearer”), along with new “traits, quirks, and motives” for each NPC. And Nature’s Remedy presents the new Master Herbalist feat, supported by a selection of new herbs and rules on how they are to be prepared.

The ARM Kickstarter only has four pledge tiers, ranging from £7 (about $10) up to £80 (about $106). The top £80 “I’m New Here” tier will earn you the ARM softcover and PDF product, plus the three previous EN World quickstarter products (65 Enchanted Trinkets, Over The Next Hill, and We Ain’t Afraid of No Ghosts). 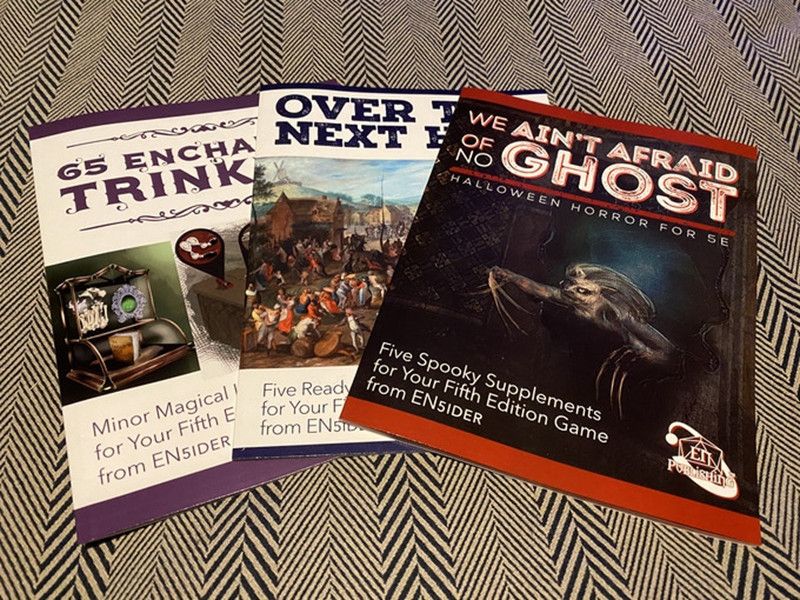 With only five days left in the quickstarter, head over now to submit your pledge for EN World’s next great fifth edition supplement.