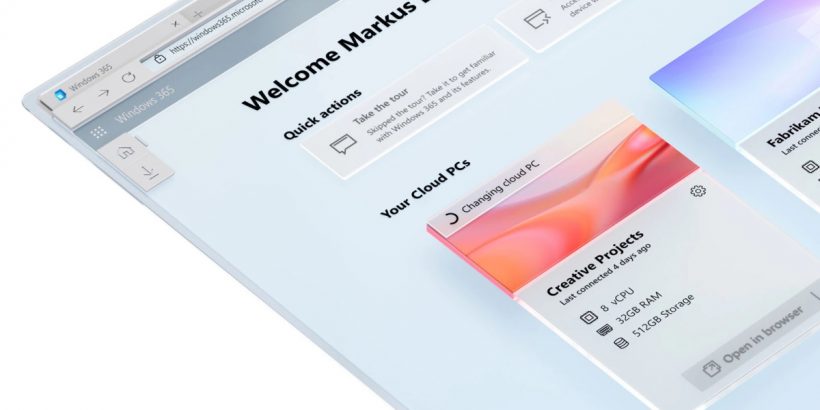 Recently, Microsoft announced that it would make a free trial of Windows 365 available to users, primarily business and enterprise users. But demand for the free trial was so high that the company was forced last week to close it off to any more users, at least temporarily. I expect Microsoft to reopen the trial in the near future as it makes more cloud resources available to address that demand. Businesses are clearly eager to experiment with this new mode of operation. What does this mean for the future of Windows served in the cloud, and for the idea of a cloud OS more broadly?

Most companies, especially in the remote-work and diverse-machine environment we are currently in and will likely remain in for the foreseeable future, are looking for a way to simplify deployment, management, and control of corporate resources. This is critical to mitigate the effects of some employees using their own personal machines with potential security implications, as well as the broad device diversity some organizations face. Thin-client and browser-based access are attractive in that they move the security and management functions off individual machines and into the cloud where IT can exert centralized control. But many web-served apps available today don’t offer the fully isolated and disassociated environment necessary to maintain full control and achieve maximum security.

The intent of a cloud-based OS like Windows 365 is to make it possible for any device that runs a full-featured browser to run the OS and programs completely from a cloud-based service. Such flexibility means that non-Windows devices like Android and/or iOS smartphones and tablets and MacOS machines could run Windows apps in a native Windows environment and not on an emulator. Further, this cloud OS functionality is isolated from the cross-impact of any other apps on the device, providing a firewall for security and data leakage needs. From a business perspective this is highly desirable as many enterprises look to simplify their complex computing needs particularly as remote workers have connected with so many different devices.

For any cloud OS to be of value, enterprises will need to be able to add and manage many different apps. No doubt this will be possible in Windows 365 as an extension of Azure management functions (and with appropriate third-party licenses), but unlike with apps loaded on a PC, the end user will no longer control that aspect. Rather, it will be IT that determines which apps are available, and the user will no longer have the ability to load their own personal apps to the cloud OS outside of IT control. This is a game changer in how personal computers are run, and it may be a road block for some organizations that allow end user autonomy in apps. But it also means that organizations no longer need to worry about what apps are running on an individual’s machine when they access corporate assets only from the cloud based OS. Users may still have their own loaded apps if their device allows it, but they will be effectively isolated from the corporate side of things.

There are also a number of advantages for IT. A cloud OS offers centralized control of the user environment. And while I expect individualizations to occur (likely along with a link to Azure Directory services), the burden on IT and especially help desk personnel will be reduced, considering the high costs involved in managing discrete devices, and especially multiple devices per user. This has the potential to dramatically lower Total Cost of Ownership, even though the need to “rent” the OS for each user may not be inexpensive.

While a cloud OS may be attractive to some organizations and users, there will be others that require additional app support that will still require access to a machine with an onboard OS and apps (or at least browser-based access to a different cloud). Many legacy enterprise apps may not run in such an environment and are very unlikely to be migrated.  Those users may not be good candidates for a Windows 365 deployment. As a result, I don’t see a cloud OS like Windows 365 becoming the universal (or even dominant) OS anytime soon.

The bottom line is, enterprises that are struggling with managing multiple device types (e.g., PC and Macs, Android and iOS, Chromebooks) that need a single access point (and a single license) to apps might find Windows 365 an attractive option over buying multiple licenses and/or managing multiple user device types at substantial costs. Managing a cloud-based OS is far easier than managing installed OS and app combinations. But for most companies, the current limitations of Windows 365, and a need to run many internal mature and legacy apps, will make Windows 365 a future rather than a current option. I don’t expect Windows 365 to be a majority of Windows installations anytime soon (if ever), but it represents a good option for many companies evaluating moving to thinner and lighter machines (e.g., Chromebooks) or looking to eliminate the need for multiple devices per user, especially for casual users (e.g., can a smartphone be good enough for some users with Windows 365 access?).

Jack Gold is the founder and principal analyst at J.Gold Associates, based in Northborough, Mass. He covers the many aspects of business and consumer computing and emerging technologies.