When Miles and Phin were younger, they hid a whole bunch of time capsules all over New York. There are 16 of them in total, with each one containing an item that holds some sentimental value to the pair. Collecting them all will give players a much better understanding of their friendship as well as rewarding them with plenty of XP and Action Points. 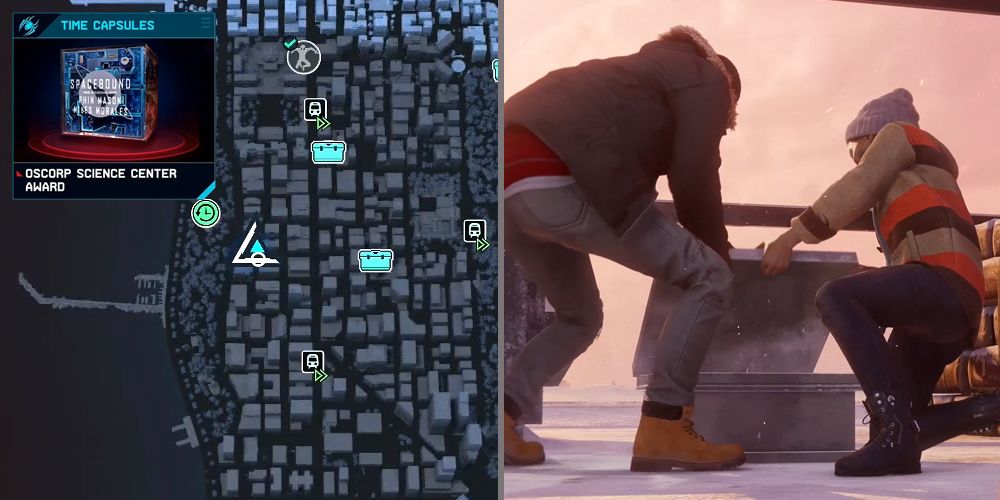 Before collecting any of the other time capsules, you’ll first need to complete the main story mission, “Reconnecting”. Just like the other story missions tied to collectibles, this one’s more of a tutorial. With that in mind, enjoy the flashback cutscene, collect your time capsule and then get ready. From here, the hunt begins. 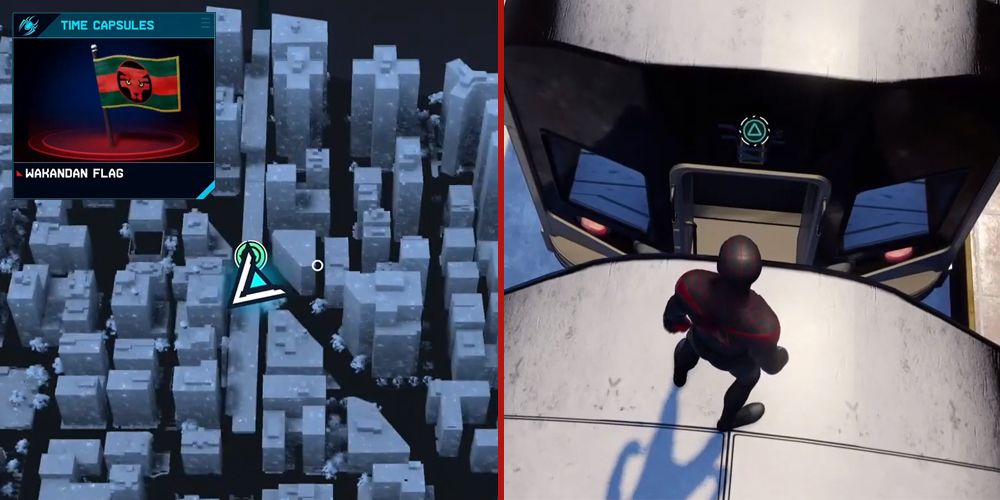 Finding the second time capsule is nowhere near as simple as the first as it’s hidden on a moving train. To get your hands (or web) on it, you’ll need to make your way over to the station in Harlem and then wait for the train to arrive. Climb onto the roof and you’ll find the capsule stuck above the connecting doors between the second and third carriages. 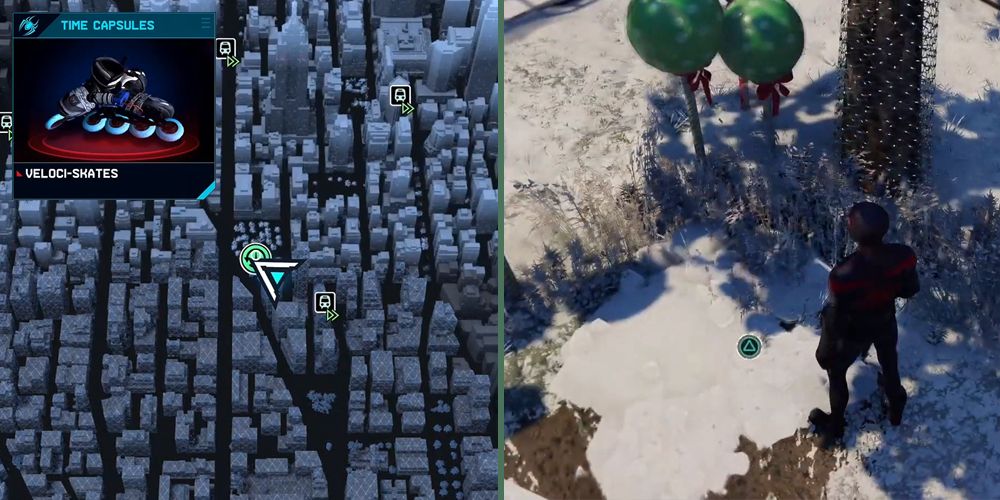 The Veloci-Skates can be found in one of the three time capsules hidden in Midtown, but you’ll have to do a bit of work before you’re able to dig them up. The spot where they’re buried is directly underneath one of the carriages of the decorative Christmas train. To move it, hold L1 and R1 together to pull it with your web. Just be careful not to stand too close when doing so though as it will be propelled towards you with some force. 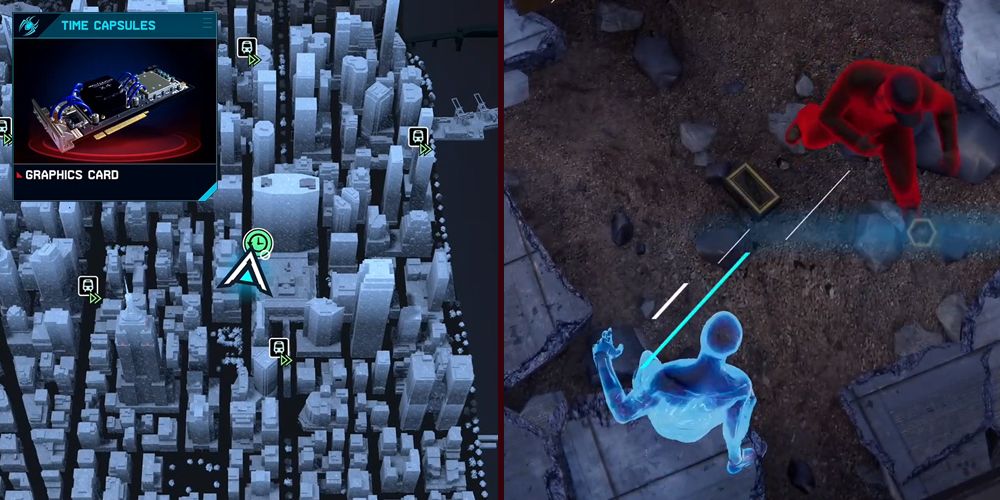 Midtown’s second time capsule can be found at the ColeXCo building where there’s some construction work going on. You’re not allowed in this area, so rather than trying to sneak in unseen, it’s easier to just activate your camouflage before entering. The capsule is behind the digger right next to one of the workers. 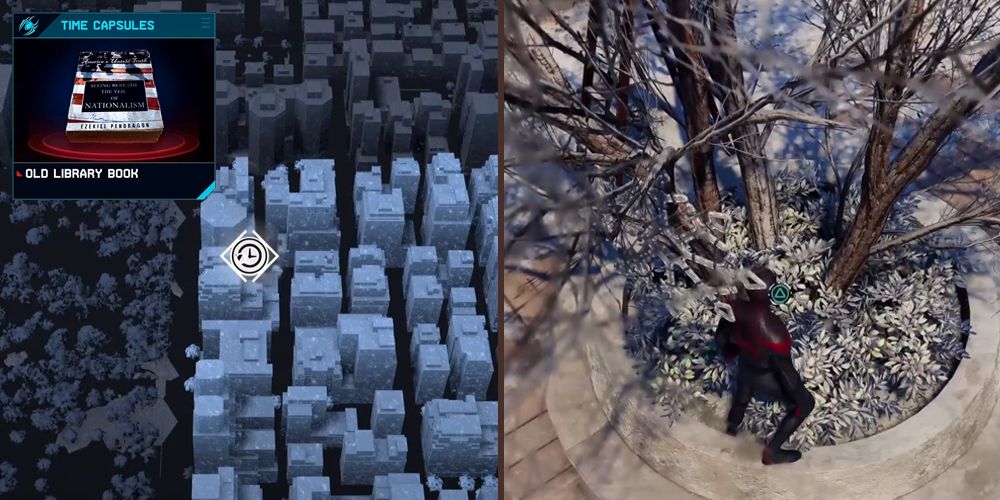 The capsule containing the Old Library Book is in a rooftop garden in the the north-western part of the the Upper East Side. It’s hidden inside a tree planter, but should be fairly easy to find thanks to the large icon. If you’re having trouble finding it, look for the old couple playing chess nearby. 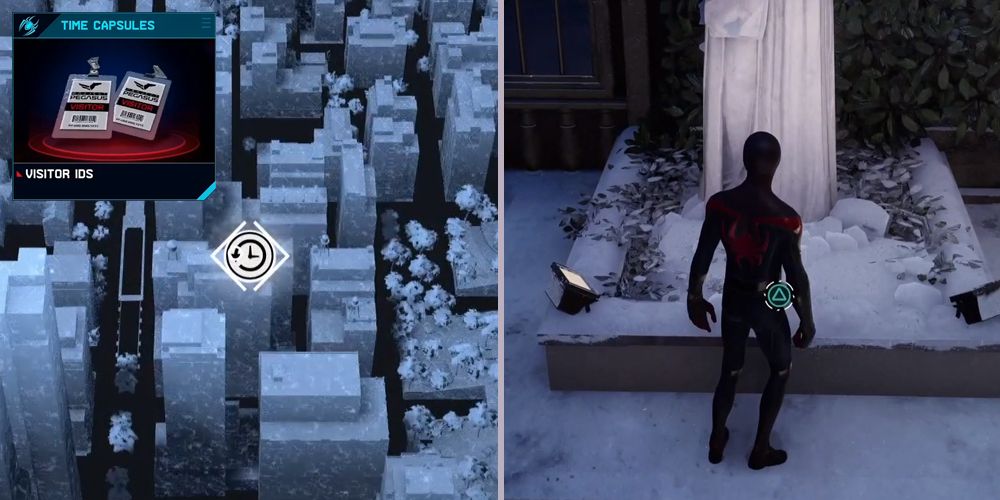 Not too far from the park area there’s a small courtyard with a statue inside. You wont be able to see the capsule immediately because of the buildup of snow, but underneath it at the foot of the statue is a time capsule containing a pair of Oscorp visitor IDs. 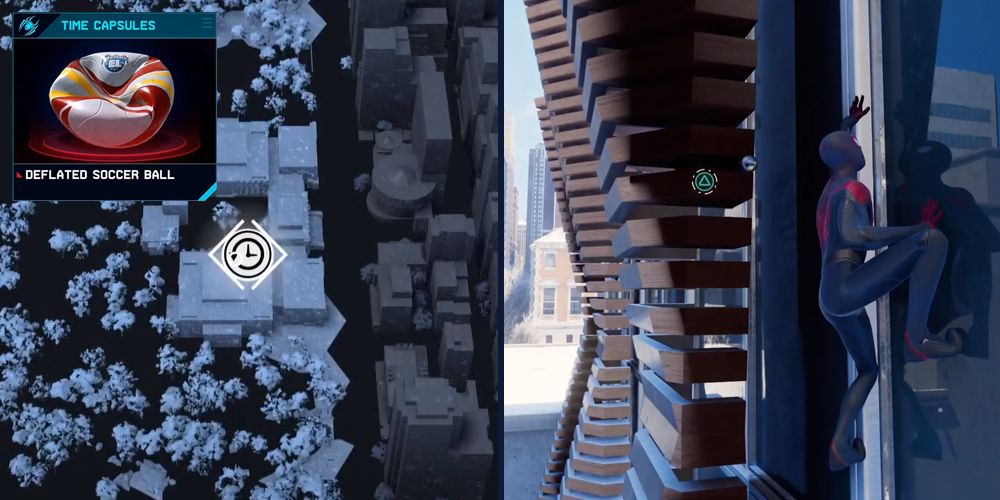 To find the Central Park capsule, head over to the southern part of the contemporary art museum and scale the side of the building to the right of the third of the four wooden decorative pieces. You’ll find the time capsule between two of the rungs about half way up. 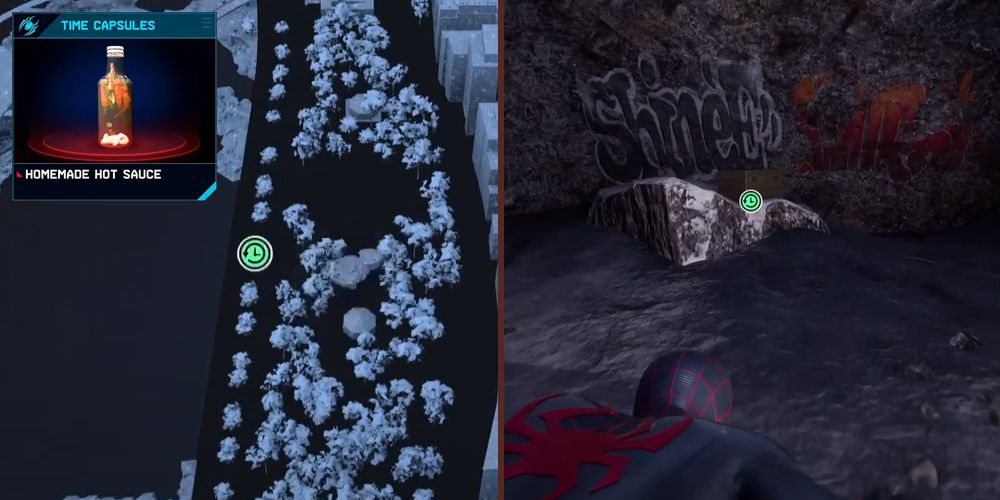 There’s only one time capsule on the Upper West Side, but it’s fairly well hidden. To find it, you’ll need to make your way over to the marker and look for a small opening at the bottom of the large rock. Crawl through it and you’ll find a small cave in which the capsule is clearly visible. 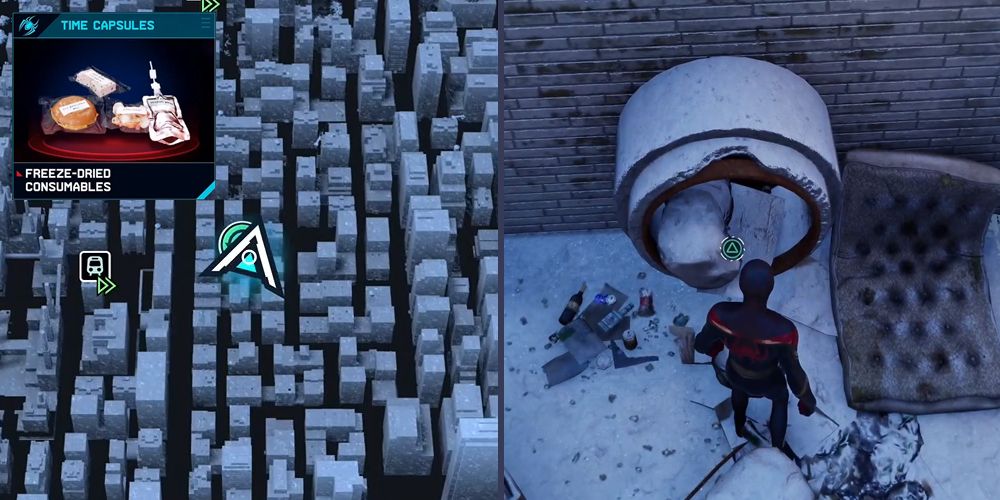 Phin and Miles stashed a time capsule containing some freeze-dried consumables in an old pipe, but it’s since been filled with trash. In order to get to it, you’ll need to hold L1 and R1 to pull the metal grating away and release some of the debris. After doing so, you’ll be able to collect the capsule from inside the pipe. 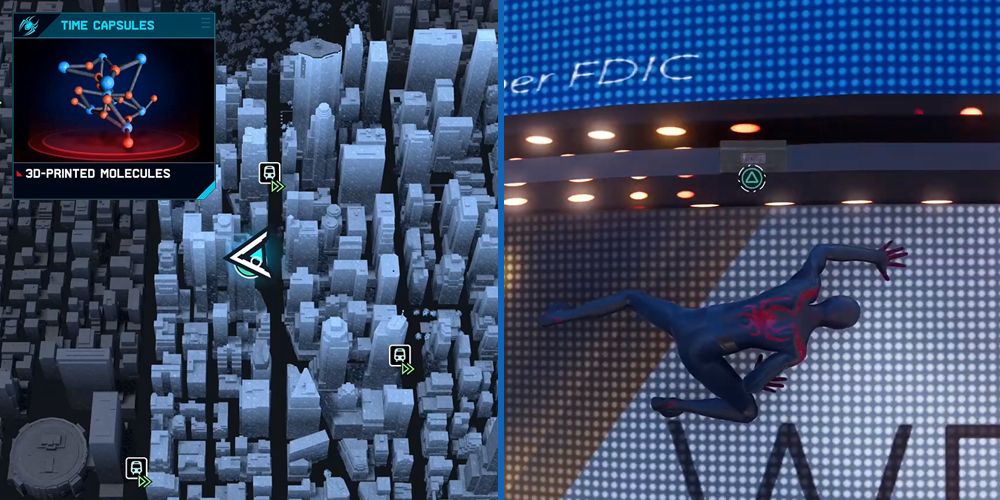 Midtown’s third and final time capsule is in Times Square between two of the illuminated billboards. You’ll need to climb up there and then find the point where the horizontal line where the two billboards meet. The capsule is in the gap. 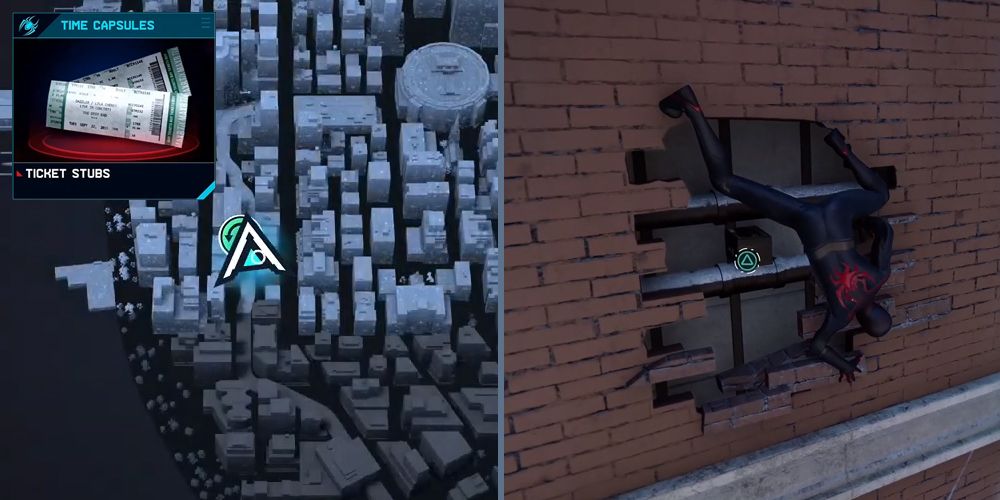 You’ll find Hell’s Kitchen’s second time capsule in a hole in the wall beneath the train tracks. As with a few of the other time capsules, you’ll first need to hold L1 and R1 to pull away some of the bricks. Once you’ve done so, the capsule should be clearly visible between the two water pipes. 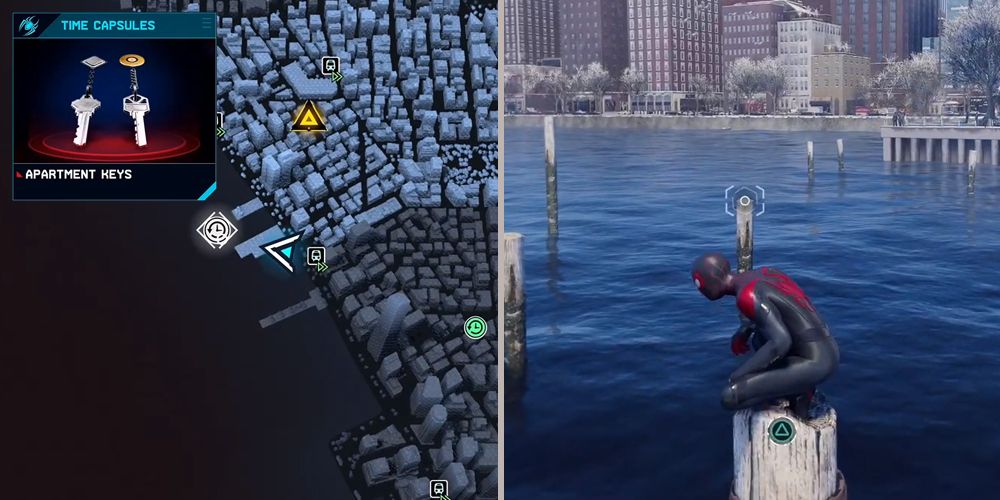 There’s only one time capsule stashed in Greenwich and you can find it out on the Hudson River. Thankfully, you won’t have to do any diving and can instead stay dry by hopping from pole to pole. The capsule is attached to the one that’s furthest away from the pier. 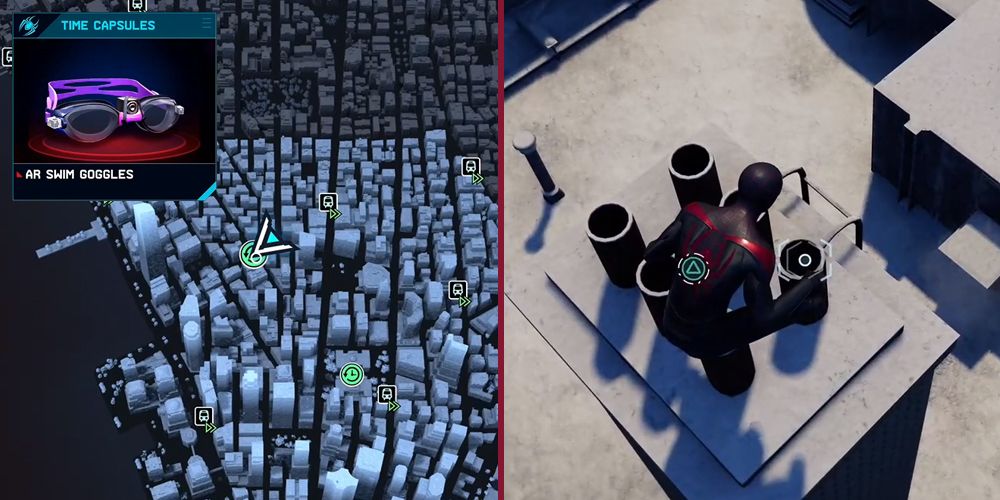 There are two time capsules hidden away in the Financial District, the first of which can be found atop one of the area’s many tall buildings. Make your way onto the roof and then investigate the chimney to pull out the capsule. 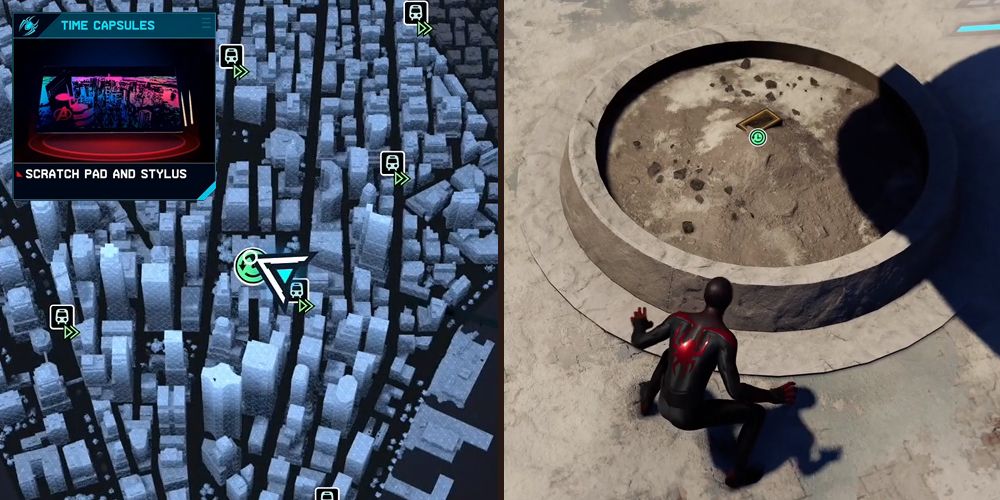 The Financial District’s second capsule is going to require quite a bit more work. It’s buried beneath the circular fountain, which just so happens to be attached to a crane. Although it’s possible to hold L1 and R1 to raise the fountain, it will fall back down immediately after. To get around this, you’ll need to lift it and then quickly shoot some web at the crane’s gears to lock them in place. It might take a few tries, but once you’ve managed it the time capsule is all yours. 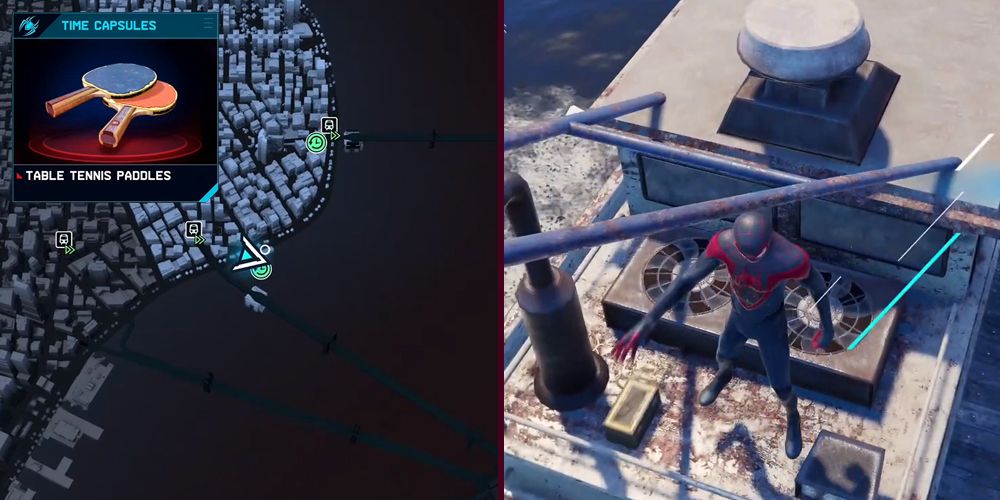 Miles and Phin probably thought they were really clever when they decided to hide their capsules on moving vehicles, but were it not for Miles’ run in with a certain radioactive spider, retrieving them really wouldn’t have been easy. This one’s hidden away on a boat sailing not too far from the shore. It’s possible to swim out to it, although it’s probably faster and easier to just wait for it to come a little closer and zip on over to it. Regardless of how you get on board, you’ll find the capsule near the fans toward the back of the boat. If this is your first time on the boat, you’ll also get the aptly named “I’m on a Boat” trophy here. 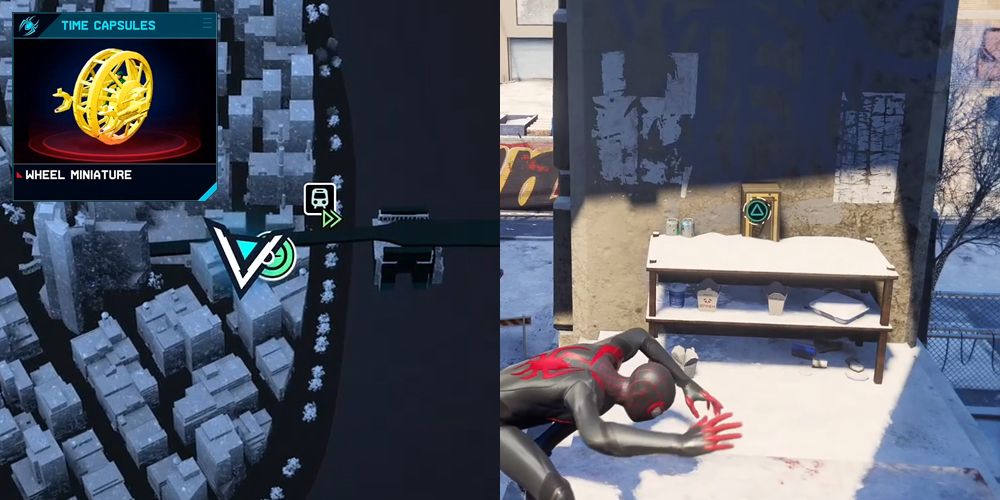 Chinatown’s second time capsule can be found on one of the supports of the Williamsburg Bridge over on the east side. After climbing or zipping your way up there, you’ll will find the time capsule that contains the Wheel Miniature. If you’ve been collecting the capsules in order, you should also unlock the “Urban Explorers” trophy at this point.

NEXT: Spider-Man: Miles Morales: How To Unlock The Cat Suit