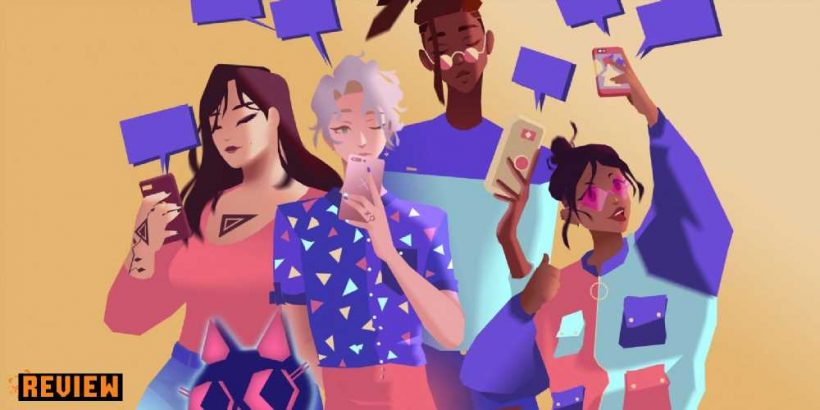 We Are OFK perfectly captures the frustration of so many young people. The desire to find yourself, fall in love, and leave a mark on the world that makes a real difference. Things are so dire nowadays that we often surrender ourselves to apathy, but the new generation often seeks to overthrow that perspective as it keeps moving forward with positivity. We’ve seen new music, films, art, and so much more created in the wake of a changing planet, and this charming narrative adventure is a shining example on how much more there is left to give.

You will inhabit the lives of multiple characters with rampant trials and tribulations, watching as trivial conversations evolve into heartfelt confessions at the touch of a button, relishing in the vulnerability these people are willing to show and how bearing their entire selves makes them so much stronger. Granted, you might cringe at the zoomer dialogue and sappy musical compositions, but that’s the entire point. Emotions are supposed to be a discordant mess of love, hate, and confusion that is so often responsible for the best art we’ve ever seen.

We Are OFK is a difficult game to describe. Certain corners of the internet might not call it a video game at all. Aside from interactive music videos at the climax of each chapter, your input is restricted to answering text messages and choosing from timed dialogue responses to drive the narrative forward. You are a curious observer, watching the lives of four individual characters unfold as you politely nudge them in the best direction. Choices will often be spur of the moment, deciding whether to ignore a fanciful Grindr date or dedicate yourself to a musical endeavour warped by anxiety, or to simply be honest to friends who are far too wrapped up in themselves to notice the bigger picture.

Music videos are the game at its most interactive. The music, lyrics, and visuals all serve a storytelling purpose, often concerning a single band member or collective obstacle our cast of characters must overcome. All of them are bangers, indulgent in their lyrical compassion and experimental in the genres they explore. You control a character and complete Wario Ware-esque minigames set to the music, whether it be walking through a crowd filled with doppelgängers to instil them with colour, or rushing around to sort your life out in a city that feels determined to leave you behind. It sounds silly, but the execution is immaculate.

The narrative unfolds across five individual chapters, which are set to be released over the next several weeks for the public. For this review I had access to the full experience and was able to binge it like a melodramatic Netflix original. I adored it, immediately vibing with the gorgeous aesthetic and colourful personality that was never afraid to get real when it mattered most. It’s honest, horny, hilarious, hopeful, and heartfelt. While the core idea of trying to establish a creative foundation in Los Angeles is compelling enough in itself, it’s the quartet of characters who underpin this journey that really bring it to life.

Itsumi Sato is a pianist who has moved across the country to live out her musical dreams, but a failed relationship has her clinging to a past she can’t quite escape. Luca La Fae is a writer in the gaming industry who has fallen out of love with a career driven forward by corporate greed, but finds new love in music despite the fear that comes from jumping into it for the first time. Jey Zhang is an older producer, hardened by the industry as she searches for an act that will bring her passion back, and perhaps act as a distraction from unfair familial expectations. Lastly is Carter Flores, a VFX wizard who has made themselves a popular name in the scene, and will do anything to help their friends despite an initially cold exterior. The cast rules, and I fell in love instantly.

The final destination for all these characters is making their collective start in the world of music. To launch a debut EP and perform for an audience who understands the ingredients that make up their melancholic melodies. Much like reality, the route is far from linear, often defined by unexpected obstacles and personal demons that seek to pull these people apart before they’ve even come together. As human beings we are inherently flawed, often selfishly think only of ourselves if it means coming out on top. Yet we also have the capacity to learn, and to forgive. Small life lessons like this are everywhere in We Are OFK, often seen as the bedrock of character arcs or thematic layers that come to form a single, beautiful whole.

I want to avoid any deliberate spoilers, so for this review I’ll stick to a thread of Luca’s character from the second episode. The first episode ends as he’s fired from his game development job after requesting more creative control over a writing assignment. Beaten down and burned out, he wanted a way out, just this cold ejection still hits hard. Luca is left without a job, without income, and without any real purpose beyond flirting with older men online and dabbling in music he isn’t convinced is good enough for the big time.

In short, he becomes a bit of an indifferent asshole. Itsumi encourages him to look for a new job or chase his passions, and Jey begs him to work alongside her on a track that has the potential to be massive. Instead of pursuing these ambitions, Luca disregards their advice entirely. Chasing validation and finding temporary happiness is more important to him right now, and it takes seeing his music played to a club full of people to see that he is more than enough, and should keep moving forward instead of leaning on fading solutions.

Each episode is filled with meaningful arcs like this as the struggles of each character intertwine and lend themselves to the overarching narrative. We Are OFK isn’t afraid to make it clear that friends can be assholes sometimes, and at times we’re the asshole and might not even realise it, but having the bravery to admit your flaws and work together on becoming better people is so important and a hard thing to come to terms with. Unlike so many other games that seek to capture the accuracy of youthful conversation and how it is to grow up in the world that exists right now, We Are OFK comes closest to doing that perspective justice and making it feel like we’re right there alongside them.

Text conversations are filled with slang, memes, and stickers, while real life interactions make constant cultural references in a lexicon that helps to make everyone feel like they belong in the real world. These are characters, members of a virtual band that the development team hope will one day stand alongside K/DA and Gorillaz, but they also feel like real people, and that is the game’s biggest accomplishment. We Are OFK is also unapologetically queer. The cast is a mixture of different sexualities and genders, and being LGBTQ+ is treated as a facet of normality without ever discounting the agency that gives our characters in the society they exist within. Itsumi and Jey have downright filthy conversations over text and Luca expresses his bisexuality in a way that made me feel so seen and welcome. It’s front and centre, the fabric in which the wider story is woven.

The approach to sex and intimacy taken in We Are OFK is something more games should strive for. It’s messy, wonderful, and so real in how the act of giving yourself to someone is explored. Queer stories are often sanitised or afraid to indulge in messiness in fear of letting us down or labelling the community as unusual to heternormative onlookers, but the truth is that I love that part of who I am, and to see a game embrace that without compromise has been a long time coming. Of course, the gleeful spice is accompanied by plentiful angst in later episodes.

We Are OFK as a whole is one of my favourite games of the year, and strikingly unique in its creative vision, but there are a few niggles worth addressing. Animation is often quite poor, with characters moving awkwardly across environments that can take away from the drama of certain scenes. Vocal performances and pacing can also feel irregular at times, although it’s nothing that similar games like Life is Strange haven’t fallen victim to in the past. It just serves to hinder immersion from time to time, making it abundantly clear this interactive drama is working within certain confines I wish it was able to break free from. Yet it’s endearing enough that complaints like this are more than easy enough to forgive.

Even as the credits roll, We Are OFK is still an unusual game to describe. It’s an introduction to a band made up of fictional characters that aims to penetrate the real world and make a true cultural impact. We have no idea if this will be a success, but the story being told throughout its five episodes rings so true and feels so real that I can’t help but cheer them on. Itsumi, Luca, Jey, and Carter already feel like trusted old friends, people I’ve been through the shit with and can stand alongside as they hope to realise their dreams. In a medium where narrative adventures have grown rather predictable, this one shines.