The Lua's Prey update for Warframe gave a massive overhaul to Grendel, a Warframe known for devouring foes whole and turning them into toxic projectiles. What was once a niche Warframe has become much easier to understand, build around, and use in endgame content.

With the right build, Grendel is a juggernaut that can annihilate entire rooms by regurgitating foes and spreading Viral procs. A good Grendel is virtually unkillable and deals amazing damage in Steel Path, making this a Warframe you don't want to miss. This guide will cover how to get your hands on Grendel, what each ability does, and cover some useful builds that make Grendel fantastic for most content.

How To Craft Grendel 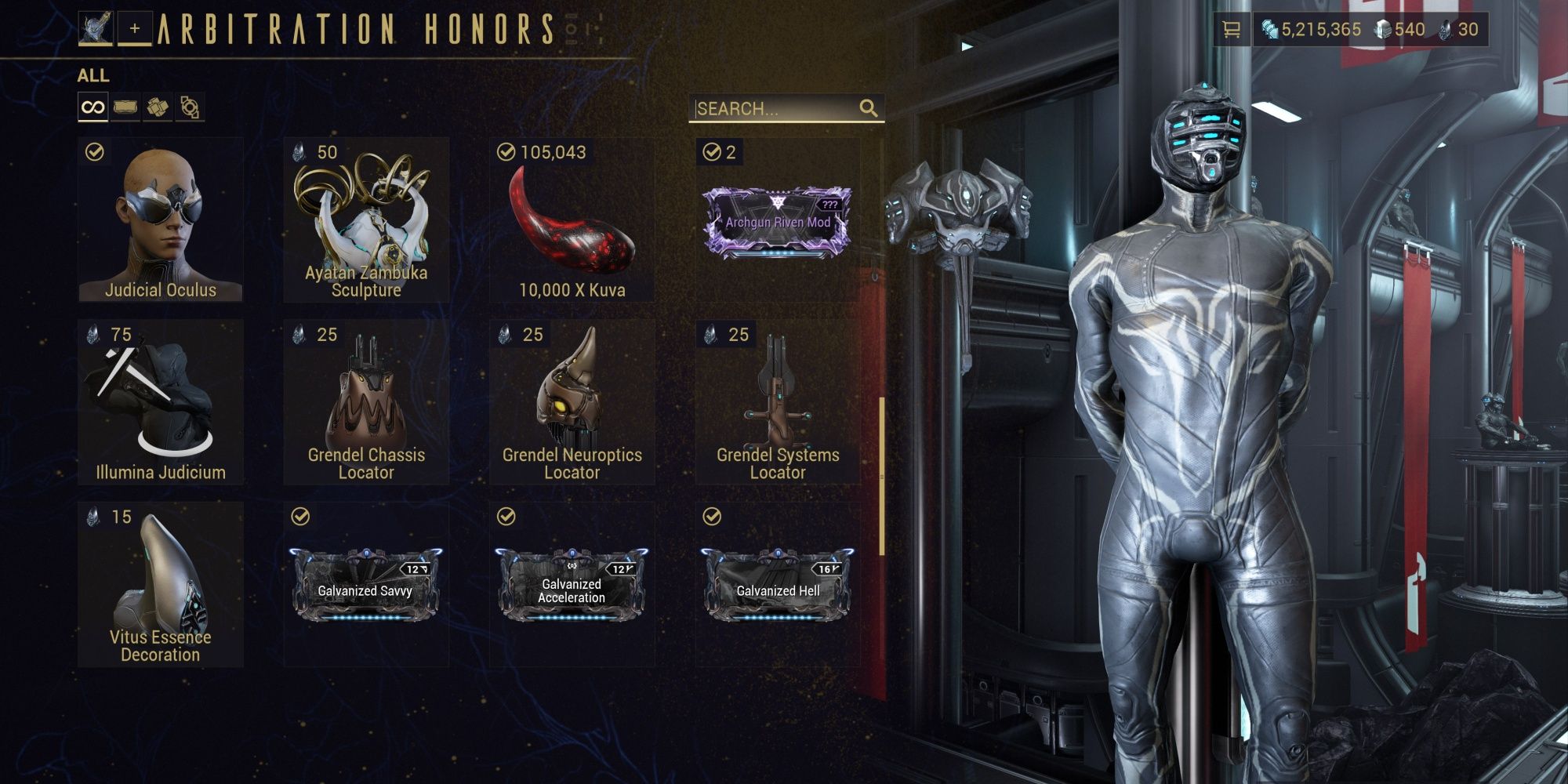 Grendel's parts can be obtained by completing endurance missions sold by the Arbiters of Hexis' Arbitration vendor. Each component (excluding his blueprint) is tied to a specific endurance mission on Europa, accessible only when you purchase these Arbitration coordinates. Only the host needs the Grendel coordinates if you're doing this with a group. Each coordinate costs 25 Vitus Essence. Failing a run does not consume your coordinate.

These missions disable your mods, substantially increasing the difficulty of these missions. We'll give specific tips for completing these missions in the next section of the guide. You'll need to complete the following missions:

The good news is that Grendel's parts are guaranteed to drop. Once you finish the mission, you'll get the part you're looking for. Grendel's main blueprint may be purchased from the market for 35,000 Credits. 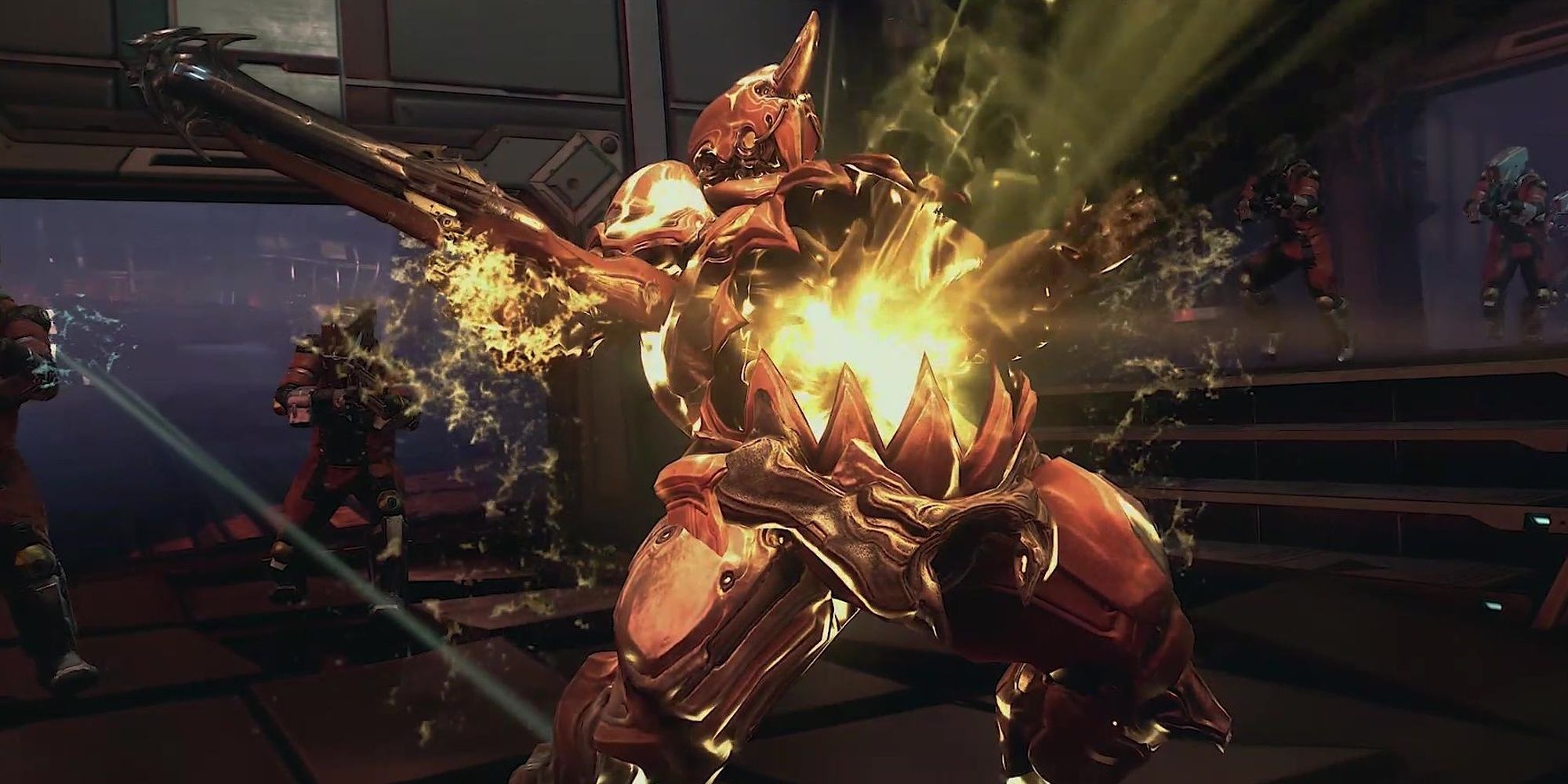 Before we give specific loadout recommendations, we need to cover loadout restrictions because you aren't just limited to no mods:

In essence, you will need hard-hitting weapons and Warframes with good base abilities. We recommend you bring Octavia, a sniper rifle, and the Broken Scepter. Octavia's Mallet ability reflects a large portion of incoming damage, cleaving through tougher foes with little issue. Sniper rifles have a combo system that drastically ramps up their damage output, making them excellent for killing Eximus targets with Overguard. The Broken Scepter will desecrate corpses to spawn Health and Energy Orbs, keeping your Energy meter topped off.

Some other Warframes worth considering are Hildryn with an Elemental Ward subsume (use Cold) and Revenant. Hildryn can reflect incoming damage and has a massive shield reserve, while Revenant can deal serious damage by chaining Enthrall and Reave. 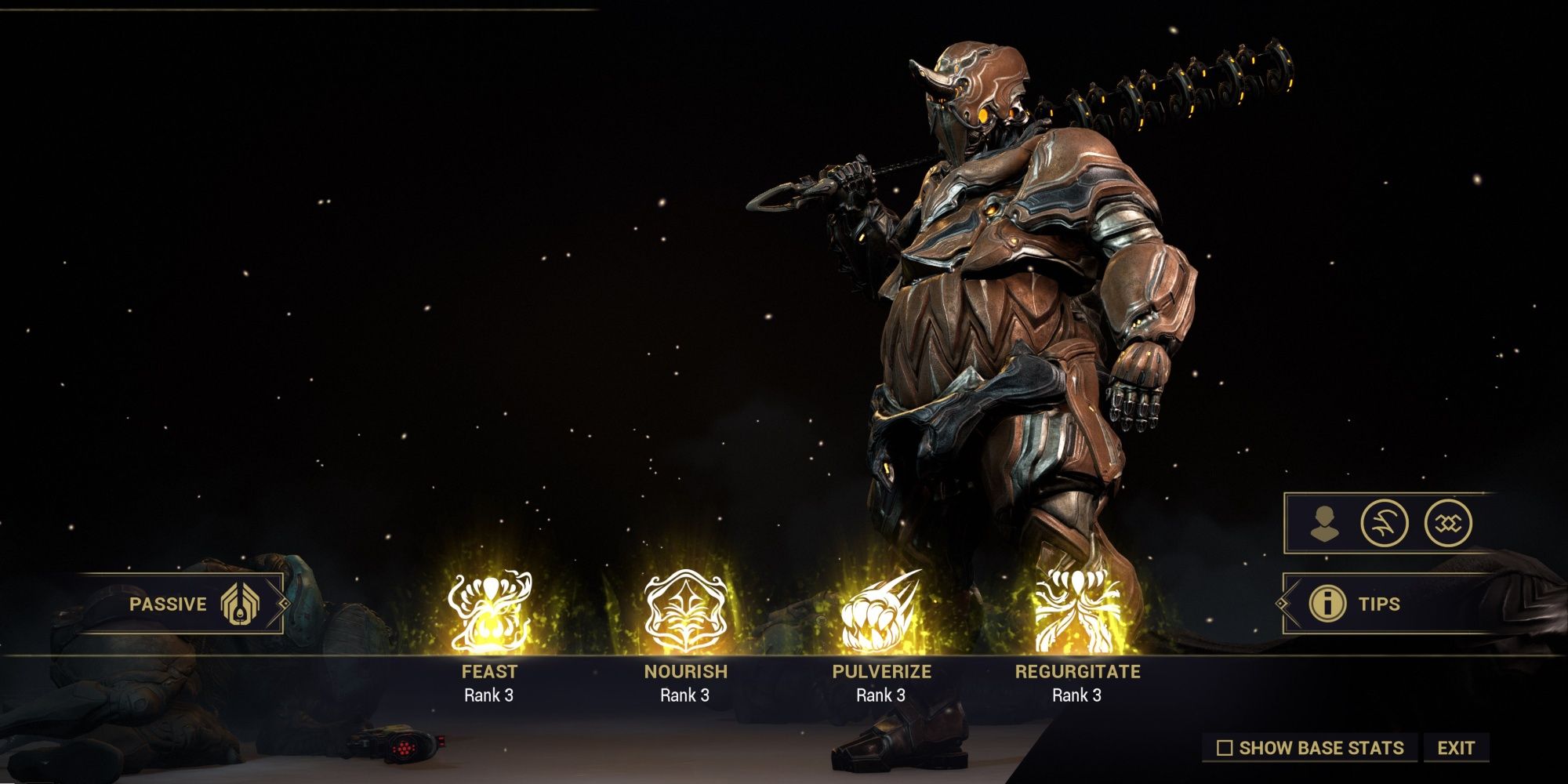 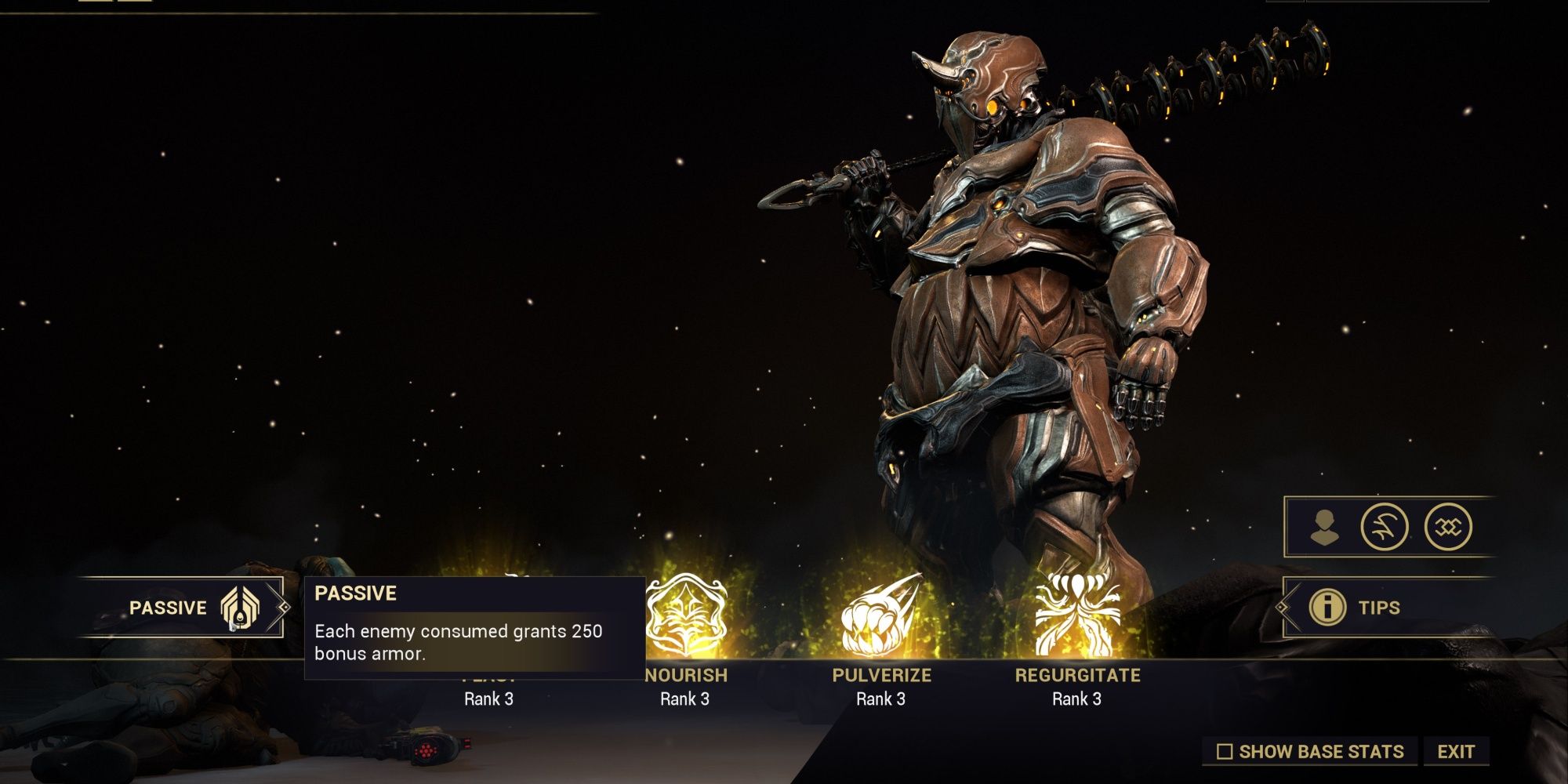 Grendel's passive ties into his first ability, Feast. You may consume up to five enemies at a time, granting a maximum armor bonus of 1,250. This armor is a flat bonus that is unaffected by mods, added to your armor total after mods and other effects are accounted for. So long as you can keep five enemies in your gut, you'll gain a massive boost to your survivability. 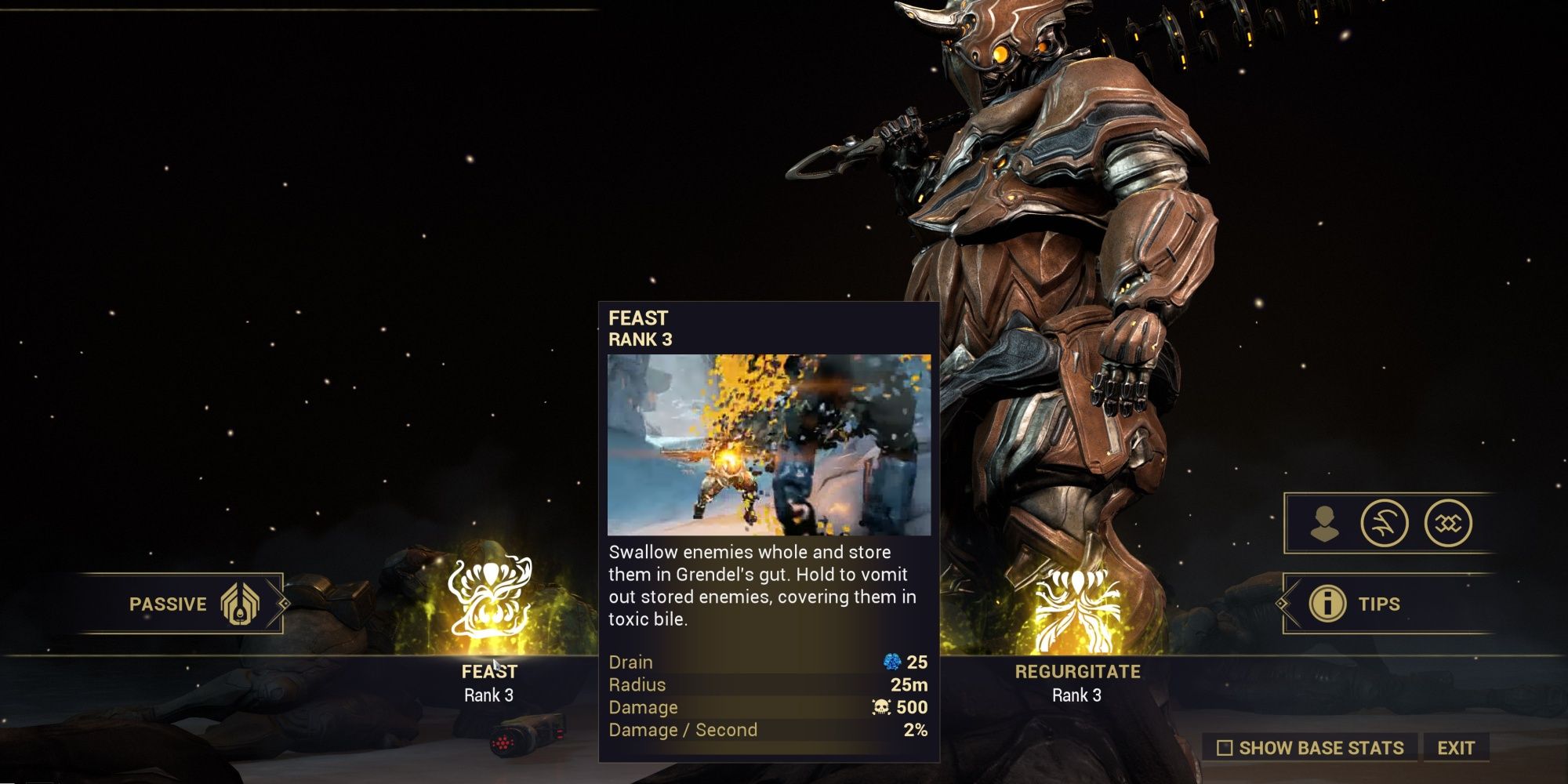 Feast: Swallow enemies whole and store them in Grendel's gut. Hold to vomit out stored enemies, covering them in toxic bile.

Grendel opens his stomach and begins devouring his foes, sucking them directly into his gut. This ability gives you just over a second to consume any target near your cursor. These enemies are then stored in Grendel's gut, denoted by a UI icon on the bottom-right of your screen. Enemies stored in your gut take 2% of their maximum HP as damage per second and grants 250 armor to Grendel. You must keep enemies in Grendel's gut to access your second and fourth abilities.

If at any time you want to remove the enemies from your gut, you may hold the cast input to spit them out, covering them in Toxic bile that deals 500 damage per second. We don't recommend ever disposing of enemies this way, as your ultimate ability does the same thing but deals significantly more damage. If you haven't played Grendel since he got reworked in Lua's Prey, you never want to discharge enemies from your gut; Regurgitate has now taken that role.

Feast scales best with Ability Range, making it easier to eat targets from a distance. Strength only affects the Toxin damage dealt when spitting out foes, something you shouldn't be doing anyway. Get comfortable using this ability, as eating enemies is required to gain access to Nourish and Regurgitate. Always keep enemies in your gut. 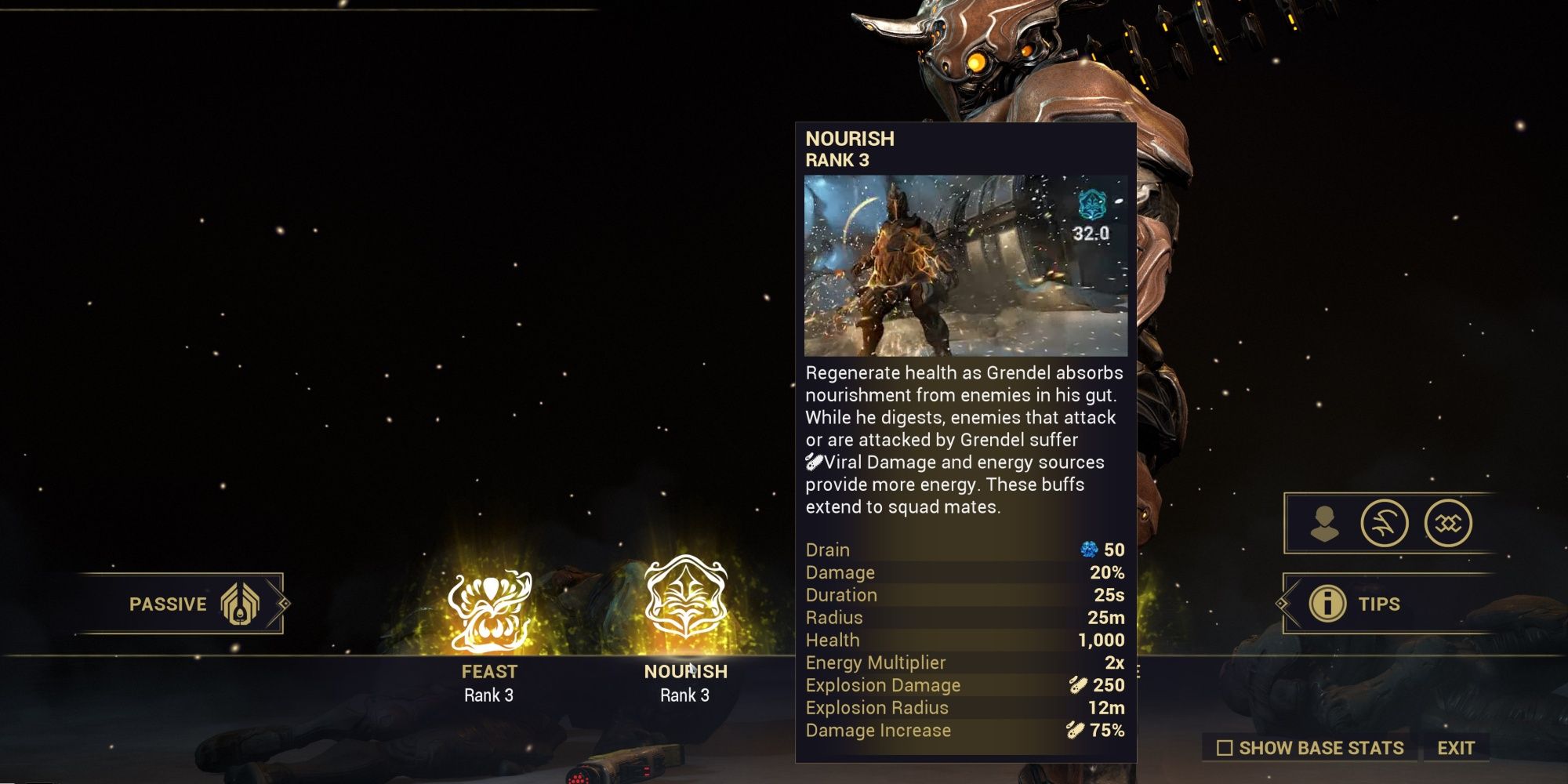 Nourish: Regenerate health as Grendel absorbs nourishment from enemies in his gut. While he digests, enemies that attack or are attacked by Grendel suffer Viral damage, and energy sources provide more energy. These buffs extend to squad mates.

Note: This ability can be subsumed with the Helminth system.

Nourish has a large ability description and a ton of moving parts, so here's how it works: