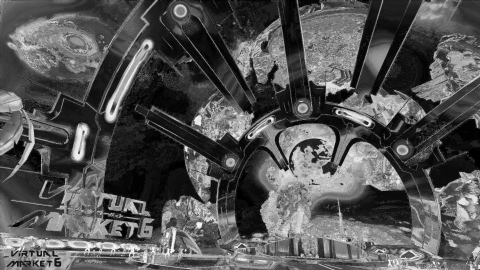 The Virtual Market 6 event kicks off in VRChat this weekend, featuring installations from HP, DecaGear, Disney and more.

Virtual Market, or Vket, is a series of in-VR events run by Japanese group VR Hikky. The events typically last around two weeks and consist of a handful of VRChat worlds on PC (they won’t run in native Quest app) that companies buy space in to advertise and sell their products. Users can explore themed booths, play minigames, pick up 3D renders of products and then head to websites to purchase them in real life or buy models and avatars for use inside the social platform.

More than just a shopping experience, though, VKet offers a lot of fan fun akin to visiting a real life festival or convention. Previous events have featured Aldi test-drive experiences, virtual Disney stores and even recreated a virtual version of Japan’s 7-Eleven stores. I got a tour of the VKet 6 areas ahead of launch tomorrow and was really impressed at the scale of complexity of its worlds and the partners taking part.

VKet 6 features a handful of themed worlds to walk through, from the bustling streets of Tokyo, brightly lit with billboards for recent Disney movies and confetti raining from above, to a Europe-themed village complete with London buses and a virtual Oktoberfest. Each world is incredibly well made with virtual characters forming vibrant crowds and interactive elements allow you to change your costume and more.

And there are huge partners involved. This time around I visited a Disney space themed after a Beauty & The Beast scene, marveled at life-size models from Evangelion, inspected 3D renders of the HP Reverb headset next to the company’s fishing minigame and met the disturbingly adorable critters featured in the popular Pui Pui Molcar animation. Going beyond pop culture brands, there’s even a full recreation of Tokyo’s Akihabara station — an essential stop for gaming and anime fans — made in partnership with Japanese Rail and realized down to the tiny details.

While VR Hikky told me that it has a lot of western visitors with its VKet events, it seems especially fitting that the company is pulling off such a great event for Japanese users at a time in which Tokyo is in another state of emergency over the COVID-19 pandemic.

Overall VRKet 6 is one of the most impressive things I’ve seen in VRChat over the years, and I’m looking forward to heading back in this weekend with friends to show off what VR Hikky and its partners have achieved. The event is free and runs from August 14 up to August 28. Will you be heading to Virtual Market 6? Let us know in the comments!