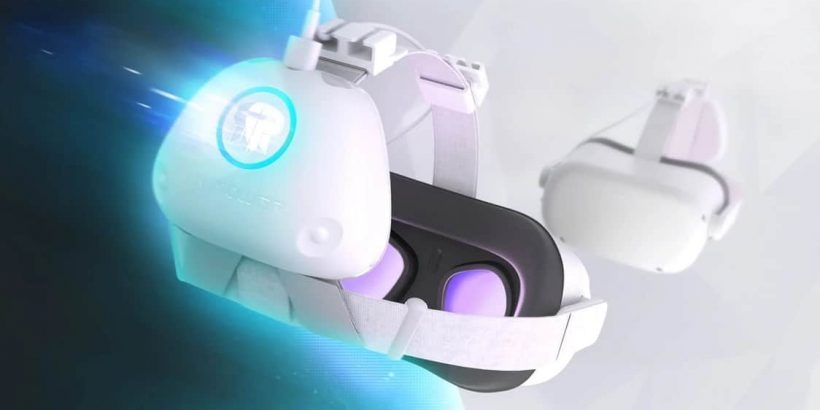 VR Power 2 is a great Oculus Quest 2 battery extender, but should you choose it over the Elite Battery Strap? Find out in our VR Power 2 review!

At 2pm one lazy afternoon, I hooked the new battery pack up to my Quest 2 and planned to then play from full charge through to flat. This, I suspected, would take maybe 4 to 5 hours total. Boy was I wrong.

The VR Power 2 itself finally died after a straight 6 hours and 10 minutes of A Township Tale. I then still had the entire standard Quest 2 battery life left. Needless to say, I had to cancel my plans for the day.

So in a nutshell, yes, the second iteration of Rebuff Reality’s battery extender for Facebook’s standalone headset works well. VR Power 2 features a 10,000MAh battery that straps to the back of either the Quest 2’s standard strap or the Elite Strap. Rebuff says it won’t work with the Elite Battery Strap but the fit is actually exactly the same as the Elite Strap so, if you want some sort of hulking monster of never-ending VR, be my guest. As with the first iteration, the added weight also helps balance out the headset a little bit for a more comfortable fit and installation is clean and simple, with velcro that slides over the top of the back straps.

But the market’s also changed significantly since Rebuff released the first VR Power for the original Quest, and it now faces direct competition from Facebook itself with the aforementioned straps. The simple question is this: should you opt for VR Power 2 or the Elite Battery Strap?

This is mainly a question of economics, both in terms of battery life and pricing. In the former category it’s safe to say Rebuff firmly has the Elite Battery Strap beat; in my review last year I noted the strap offered about 3 extra hours of playtime, totaling off to about 5 hours overall. With VR Power 2, you’re getting roughly double the battery charge from the strap and then adding in two more hours of Quest battery life for a roughly 8-hour life.

Granted it’s rare you’ll want to spend that long inside of VR, but for those marathon sessions of Township or Onward, this’ll more than do the trick.

Price is a little more complicated, as it ties directly into the comfort factor too.

A straight-up purchase of a VR Power 2 costs $69.99. That can attach to the standard Quest 2 strap, so there’s no extra purchase necessary. On the surface, then, it beats out the $129.99 Elite Battery Strap with ease, even considering that includes a $49 carry case.

But, here’s the thing, I didn’t find using the VR Power 2 with the standard strap to significantly improve the comfort of the Quest 2 overall. I still ended up having all the same reservations I had in my original Quest 2 review, and could only play for about an hour or so before the weight on my face became too much. An extra 6 hours of battery life doesn’t really mean much if you can’t even wear the thing for a fraction of that time but, if you’ve never had a problem with the standard strap, that option will likely work nicely for you.

That completely changed when pairing the kit with the Elite Strap, though. With the VR Power 2 sitting just atop the plastic backing (see the image above for reference), I got much better weight distribution (in fact if anything it was now just a little too heavy on the back of my head but I got used to it). I had to move the strap itself after an hour to find a better position where it wouldn’t dig into my head but, once I did, I played the next 5 hours without a hitch.

Personally, I get the most comfortable Quest 2 experience with the FrankenQuest mod which uses the HTC Vive Deluxe Audio Strap. I think both of Facebook’s Elite Straps are good, but not quite as snug as that mod. But with the extra weight of the VR Power 2, wearing the Elite Strap was the most comfortable I’ve been on Quest 2 outside of using my FrankenQuest, and the first time I’ve genuinely considered making a permanent swap.

But the Elite Strap costs $49, so, paired with the VR Power 2, you’re essentially at the same price as the Elite Battery Strap for a few more hours of battery but without the Carry Case. The Elite Battery Strap has the benefit of being a much more elegant, all-in-one solution that won’t require you to strap anything to the back of the headset, making it the better choice for more casual VR users. But if you’re really prone to jumping into Population: One and playing until Quest 2’s battery falls flat, the VR Power 2 will give you the extra juice for more game time.

It’s also worth noting that Facebook’s Elite Straps have a reputation for snapping and, although my kit from October 2020 is still going on strong, who knows if the added weight of the VR Power 2 could accelerate that process for some.

As with the first iteration, the VR Power 2 is a rock-solid Quest battery pack that extends the headset’s runtime well beyond what most will need and throws in some incidental comfort benefits to boot. Personally, I still find Quest 2’s standard strap too awkward to wear for more than an hour or so even with the battery pack attached, but VR Power 2 finds a natural home on the Elite Strap. That said, the $129 combo for VR Power 2 and Elite Strap is neck-and-neck with Facebook’s own Elite Battery Strap and Carry Case. If you’re a hardcore VR gamer that’s regularly looking to spend upwards of six or so hours inside Quest 2, then definitely grab the VR Power 2. But if you’re more prone to shorter sessions, the Elite Battery Strap’s elegance and added case win out. The choice is yours.

You can grab VR Power 2 direct from Rebuff Reality. What did you make of our VR Power 2 review? Let us know in the comments below!