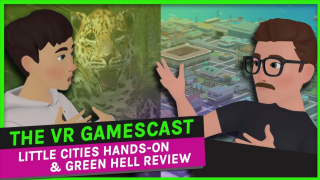 It’s time for another weekly dose of VR gaming news and reviews. In other words, yes, the VR Gamescast is back!

Jamie and Harry return to talk about the week’s headlines and releases. On the docket this week is a roundup of new VR mods, including fan-made support for Resident Evil 8 and Half-Life 2, as well as a promising new campaign for Half-Life: Alyx. How are mods able to do the work we want so many other big developers to do?

We’re also looking at new announcements for Walkabout Mini Golf and Flight Simulator. The former is getting a Myst crossover, whereas the latter recently confirmed that 10% of its players exclusively use VR. That’s a heck of a lot!

Finally, it’s impressions time. Both Jamie and Harry have tried Little Cities and they have some thoughts to share before the main release in two weeks’ time. Then Jamie gives his impressions on the Quest release of Green Hell VR. Is this the definitive way to try the survival game? Find out in the video above or make sure to read our full review right here.

The VR Gamescast goes live every Thursday. Make sure to join us for all the latest goings on in the world of VR gaming!