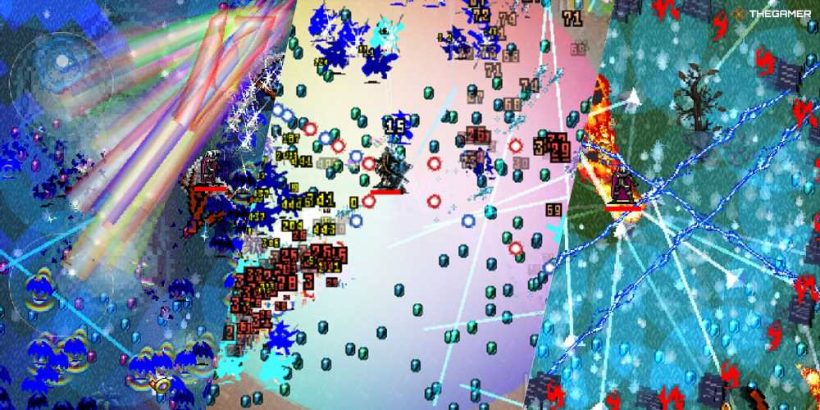 Being a roguelike, shoot 'em up game, Vampire Survivors allows you to take advantage of its weapons and items, letting you combine the various evolutions and unions into a build that suits your style.

Whether it's all about dealing damage, area of attacks, farming all the gold, or simply to survive, there are a lot of builds that are able to cater to each of your needs. To help you get started somewhere, have a look at some of the best builds in the game that's possible for any player to put together.

The Importance Of A Build 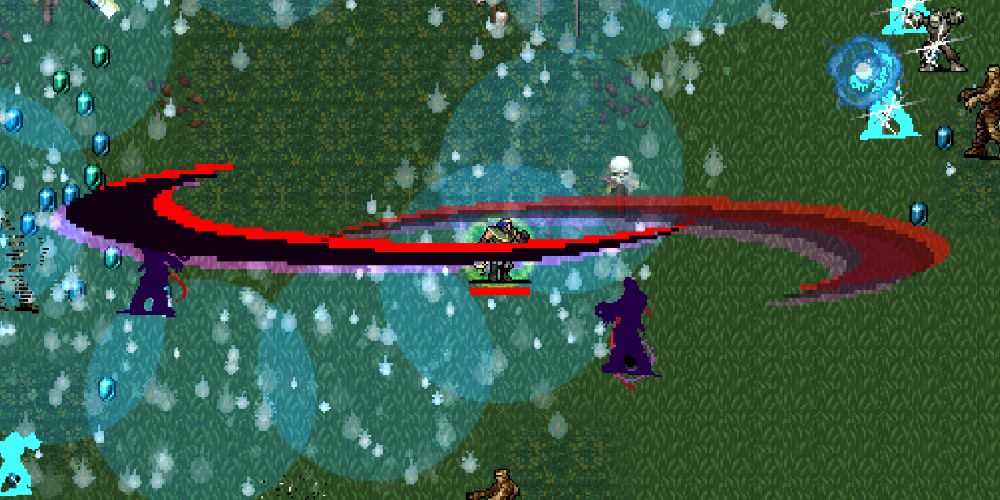 Evolutions and Unions are good for indicating which items you'll need to pick up for a particular build. To evolve or unite weapons and items, you have to level up the base weapon or item to their fullest, and then unlock the evolved or unified form by opening a chest.

Once you have the weapon and its counterpart, level up the weapon before opening a chest. Opening a chest before then will only generate another item or grant a random item in your inventory one level. It's a strategic way of boosting your chances of evolving and unifying a particular weapon.

For a build to work, you have to think about what kind of items and weapons you need in the early game and what you'll end up with in the late game. The character, Antonio, for example, has Whip as his starting weapon, and you need Hollow Heart to evolve it into Bloody Tear.

Keep in mind that some stages have certain items that you can pick up. In this case, the first stage, Mad Forest, has Hollow Heart which you'll be able to find by heading north from your spawn point. Knowing this, you can evolve Whip into Bloody Tear much sooner. For builds that require more than two evolutions or unions, it's best to have at least one that's quick to unlock so that the stage limit isn't reached before the build is done. 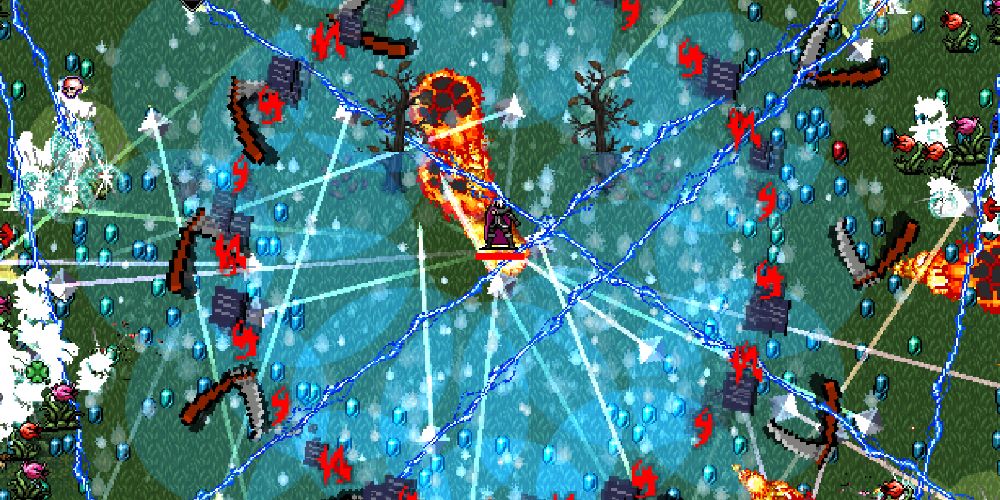 The weapons and items you'll be using are Lightning Ring, Santa Water, and King Bible. These are area of effect weapons, which automatically target enemies around you without the need for you to aim at anything.

The evolved forms of these weapons are Thunder Loop, La Borra, and Unholy Vespers. You should evolve these items first to make use of their full potential later in the game. To do that, you need to pick up Duplicator, Attractorb, and Spellbinder to evolve each of their respective weapons.

Combining your evolutions with passive items is advantageous, as passive items can boost your base stats. For this build in particular, you should try to pick up items like Spinach, Empty Tome, and Candelabrador. Besides the items you already needed for the evolutions, these are for added measure and great for scaling with some of your stats.

Many of the characters in Vampire Survivors have passive bonuses. Antonio, for example, gains ten percent more Might for every ten levels, up to 50 percent. To add more Might on top of that, you can pick up the passive item, Spinach, and level it up for an added boost.

You'll have three inventory slots left after you've successfully picked up the primary weapons for this build, which now leaves you with a few other weapons choices. Keep in mind that, even though you have the evolutions, it doesn't stop passive items like Candelabrador, Spellbinder or Duplicator from boosting other weapons too.

Runetracer, Axe, Knife, and Fire Wand are optional weapons that'll benefit from the passive items you've already got. Duplicator adds a maximum of two additional projectiles, Candelabrador adds a maximum of 50 percent to the area of your weapons, and Spellbinder can increase the duration of weapon effects by 50 percent at maximum.

Some weapons ignore certain passive effects. Knife, Axe, and Fire Wand ignore Duration effects, which renders Spellbinder useless on them. On the other hand, a few weapons can scale with all effects and bonuses, like King Bible.

For the best results, you should unlock Imelda, Porta, and Clerici. These characters are important since their starting weapons contribute to the build, especially Porta and Clerici. Porta's starting item is Lightning Ring and Clerici has Santa Water.

Both of them have an area bonus effect — Porta has a permanent 30 percent bonus, while Clerici has a temporary area bonus of 400 percent, although this is totally gone by the time you reach level five. While they don't have an area bonus, Imelda gains ten percent additional experience every five levels, up to 50 percent. 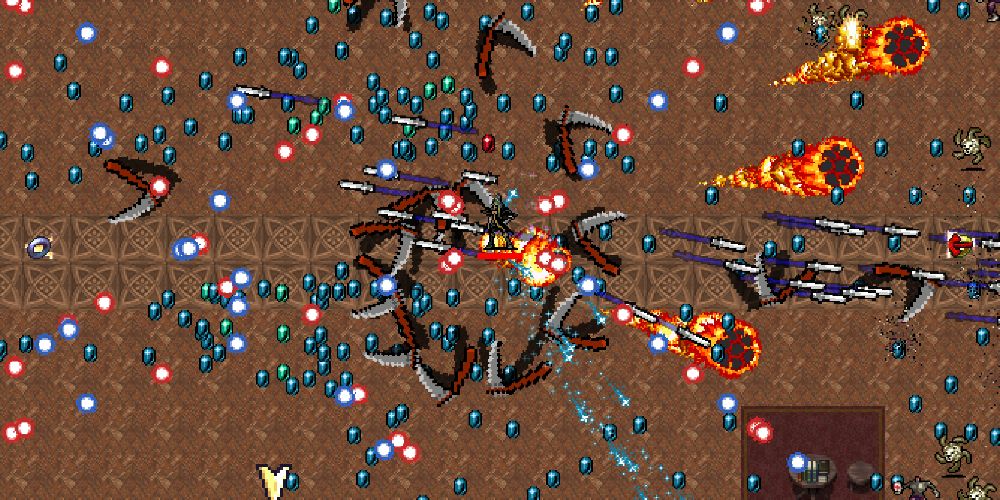 For this build to work properly, you'll need to unlock Arcanas first. If you haven't unlocked it yet, you can do so by going to the Gallo Tower stage and immediately start moving up the map. The item you're looking for is called the Randomazzo.

Thousand Edge is the evolution of Knife, and behaves in the same way — it shoots in the direction you're moving. Whereas Holy Wand shoots at the nearest enemy, Hellfire aims randomly, and Death Spiral is an area of attack that shoots outward from your character.

Other items, except for those needed for evolutions, include Duplicator and Tirigisú. You can unlock Tirigisú by surviving for 20 minutes as Krochi. Tirigisú can revive your character once with 50 percent of their total health. You can level it up, but even then you'll only have two revives at most.

When you play as Pugnala for this build, you can use Tirigisú to evolve and unify the guns, and Phiera Der Tuphello and Eight The Sparrow to create Phieraggi.

This build doesn't need any additional weapons since most, if not all, of your arsenal will comprise out of the evolutions and unions you'll unlock. You'll most likely have two inventory spaces left, which you could use for other weapons like Clock Lancet and Laurel, or Phiera Der Tuphello and Eight The Sparrow.

Characters that are going to make this build successful are Imelda, Pugnala, Arca, Gennaro, and Red Death. Each of them have a starting item that contributes to the build, like Pugnala's Phiera Der Tuphello and Eight The Sparrow. Red Death also has a strong starting weapon, Death Spiral, which doesn't need to be leveled at all. 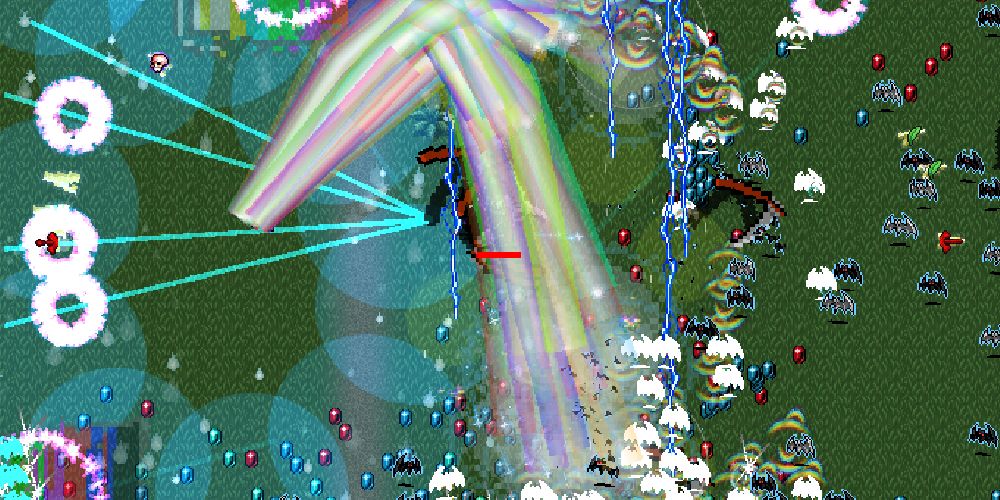 This is another build that places a lot of attention to area of effect, with Vandelier as its core component. The build also makes use of Candelabrador's area effect augmentation to boost the rest of your kit. For this particular build you must have Cavallo unlocked in order to pick up Cherry Bomb.

To get this build up and running, you'll need weapons like Peachone, Ebony Wings, Santa Water, Runetracer, and Cherry Bomb. Peachone and Ebony Wings have to be at max level to unlock Vandelier — it's the only union in this build. The other weapons are evolutions and need items like Attractorb and Armor, respectively. Cherry Bomb is the only weapon that neither has an evolution nor a union.

An important passive item you should pick up is Candelabrador. This item augments the area of attacks by ten percent and up to 50 percent at full level. It also evolves Axe into Death Spiral, which is an option you can use if you haven't collected some of the other items, yet.

The core weapons you need to evolve are going to be weak at the start of the run, so it's advisable to pick up another weapon that'll help fend off some of the enemies while you're putting the build together. Lightning Ring, Axe, King Bible, and Fire Wand are good choices for additional damage output at the start of your run.

Your first choice for this run should be Porta, because she has a permanently increased area effect and a temporary cooldown bonus. As a secondary option, you can run with Cavallo. He has Cherry Bomb as his starting weapon and gains more projectiles every 20 levels, but only up to a maximum of three extra projectiles.