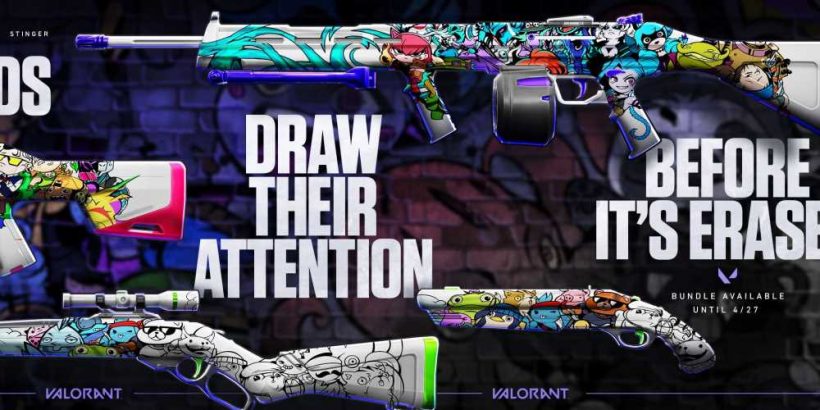 Valorant has just unveiled a brand new skin pack called the Doodle Buds, which are a collection of cartoon-themed cosmetics that react to your gameplay. Each time you get a kill, the black and white outlines begin to fill with colour, filling up the canvas that is your gun.

The bundle is up for grabs until April 27, so you have two weeks to pick it up if you want some colouring in pages to go with your high-octane gunfights. There are also some themed sprays and player cards to match, meaning you can deck your entire profile out with some cartoonish Valorant characters.

You can get these reactive skins for the Phantom, Ares, Stinger, Shorty, and Marshal. As you can probably guess, most are themed around Valorant characters, but the Ares skin dives deeper into Riot's catalogue with League of Legends Champions plastered across the weapon. You can see Annie, Yorick, Jinx, and more.

To get the playercards and sprays, you have to buy the entire bundle – they can't be grabbed separately. But in doing so, you'll get every gun in the pack at a discount, so if you fancy decking out your entire arsenal with some cartoonish Riot characters, it's a win-win.

As for colouring in the entire gun, it'll take an ace because of how many kills it requires. An ace, if you don't know, is when you single-handedly take out the entire enemy team. Now you'll have a visual indicator with these reactive skins to show off your skill. Or the enemy's lack of skill.

In other Riot news, executive producer Greg Street claimed that there is no guarantee the highly-anticipated League of Legends MMO will ever ship. But Riot remains "optimistic" that it will eventually see the light of day. Maybe. Until then, you can get some League characters in a cartoon-y style on your guns in Valorant. Silver linings, eh?