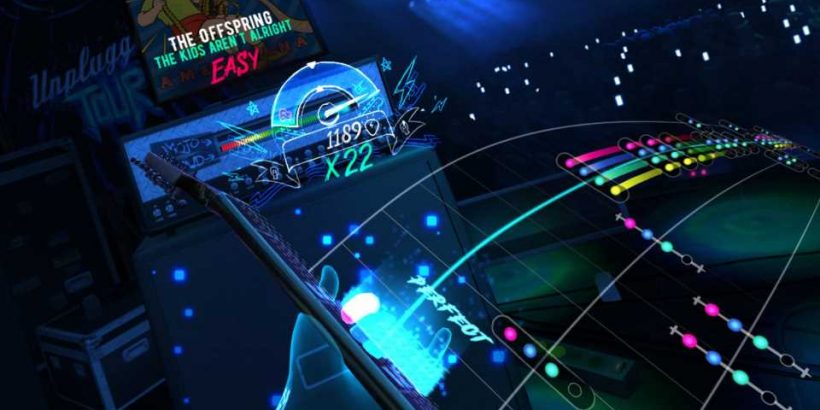 The music title, developed by Anotherway and published by Vertigo Games, hits the standalone headset on October 21. While anyone with an Oculus Quest can play the game, there is a PC VR version coming later this year that is limited to the finger tracking on the Valve Index Controllers and VR headsets with hand-tracking capabilities, so don’t expect to play it on an Oculus Rift or a base HTC Vive.

That’s because Unplugged offers a Guitar Hero-like experience without the need for plastic peripherals. Colored notes stream towards your virtual guitar and you’ll have to match them with the corresponding fingers in the correct position then strum to the beat. You’ll need to master your technique across the game’s career mode, which is mentored by Satchel from eccentric glam rock band, Steel Panther.

Earlier this week we confirmed that Weezer’s Say It Ain’t So and Ozzy Osbourne’s Flying High Again were coming to the game, joining the previously announced The Kids Aren’t Alright by The Offspring. Today, Anotherway and Vertigo also confirmed another six songs for the game. They are:

There are still other tracks to be revealed, so make sure to check back next week as we confirm the entire tracklist.

We got our first chance to play Unplugged earlier this week. Though you might doubt that VR hand-tracking is capable of keeping up with an air guitar game we came away pleasantly surprised at how well it worked. The game isn’t a straight-up imitator to Guitar Hero, instead picking more rhythmic tunes that aren’t hugely technical to play along to, and there’s a smart use of bonus features and minigames to mix the experience up.

Unplugged has also been our Upload Access game of the month. We’ve been speaking to producer Marcus Henderson about the project and have more to come. Check out our full line-up below!