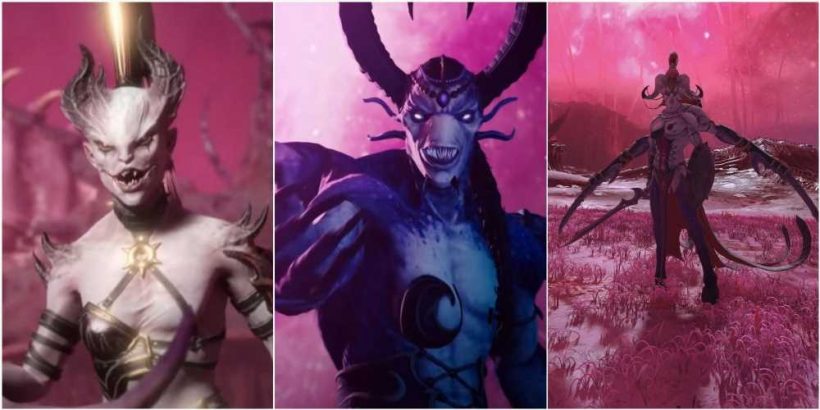 Are you looking for the best and most cost-effective units for your Total War Warhammer 3 Slaanesh campaign? Then look no further than this list. After thoroughly analyzing all 17 Slaanesh units in both campaign and custom battles, and on various difficulties, they were compiled into this tier list.

From the S-Tier (superb) to the C-Tier (not recommended), you can use this as a guide when building the perfect army to defeat (or seduce) your enemies. That is if you have not already used shrewd diplomacy to force them to submit to you. 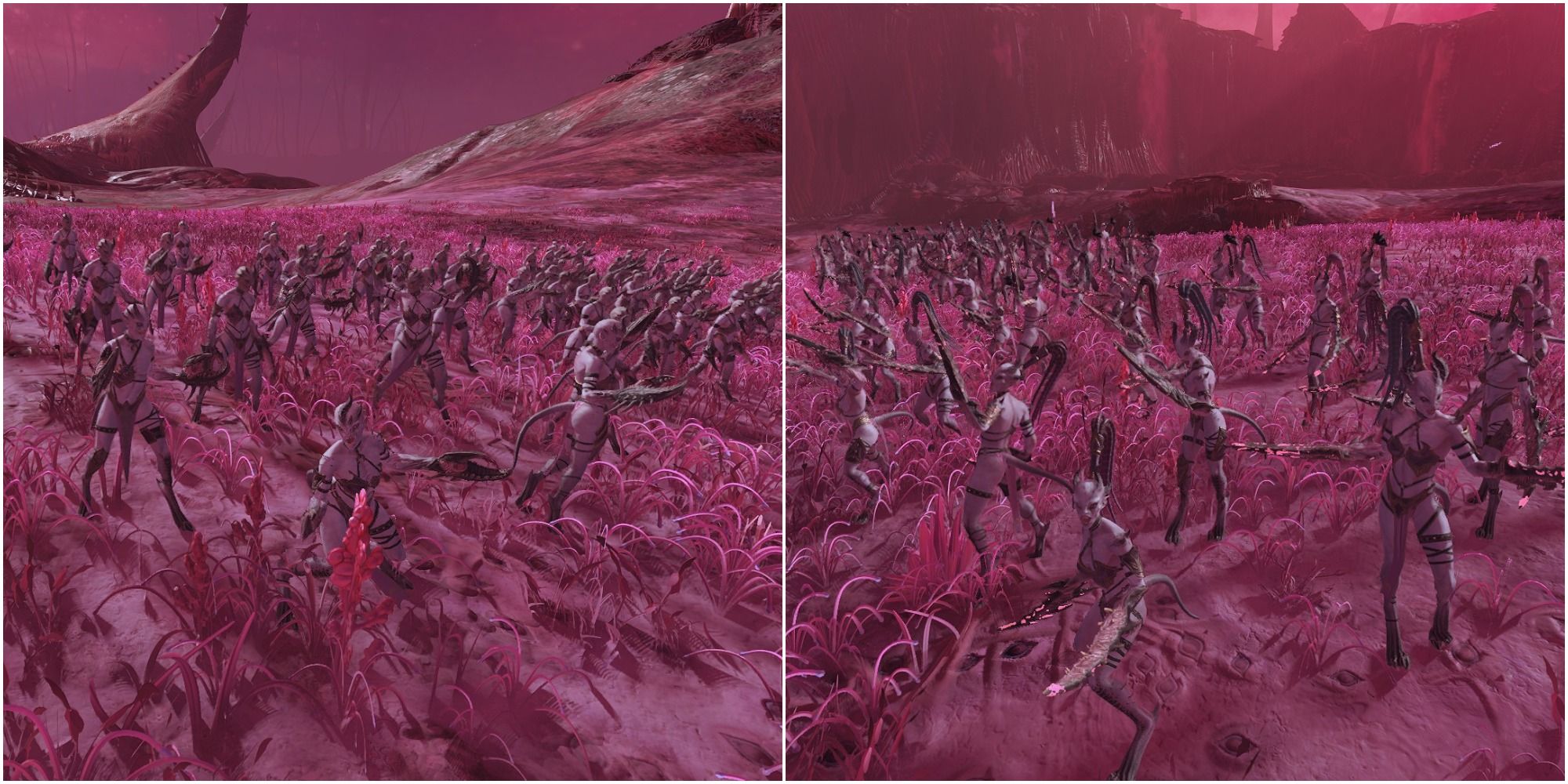 This elite infantry unit of Slaanesh will have no problems dealing with most enemy infantry. Their speed is very high, as they are almost as fast as most heavy cavalry. The Exalted Daemonettes also gain a large boost to their stats if you are attacking the enemy's flank (or rear), and when the enemy's morale is wavering. All in all, you will want to have several Exalted Daemonettes in your (late game) army or even an entire stack of them.

Everything that is stated above concerning Exalted Daemonettes, also applies to the regular Daemonettes. The only difference is that Daemonettes are a bit weaker, but then again they are also cheaper. Daemonettes lack the Soulscent ability but do also come with the Devastating Flanker ability. Due to their cost-effectiveness, and since Daemonettes will be useful throughout the early and mid-stage of the campaign, they deserve a spot in the S-Tier. 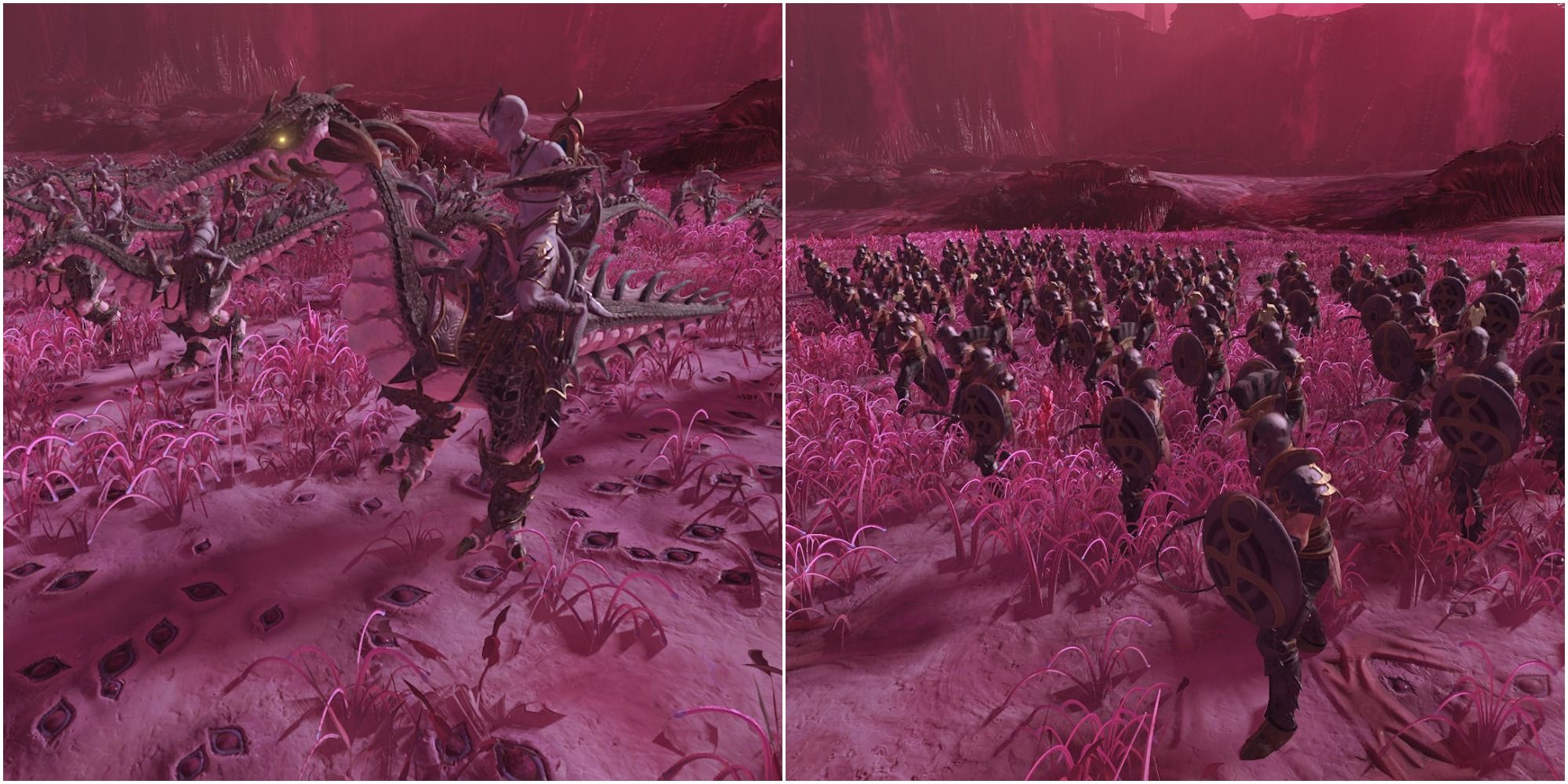 These Marauders are a cheap unit and are useful for your early-game frontline. Their armor is low, so you will want to be wary of enemy missile units, but then again you should have plenty of fast units in your army to deal with those.

As soon as you can afford them, you should replace your Marauders with the Hellscourges version, which uses shields and whips. They have more than double the melee defense than regular Marauders, making them more resilient and an even better frontline unit.

The Seekers of Slaanesh are a good cavalry unit with incredible speed. They are not great against enemy (shock) cavalry, but they are exceptional at evading them and running down routing enemies, taking out enemy artillery, and harassing enemy missile units.

The Heartseekers is a Shock Cavalry unit and can be considered an upgrade from the Seekers. Their attacks are magical, deal poison damage, and have high armor-piercing. Your Heartseekers will likely be among the top performers in your army in terms of getting the most kills.

The Hellstriders of Slaanesh is a cheap cavalry unit with the same incredible speed as the (Heart)Seekers. For their cost, you will be surprised by how effective they can be against enemy cavalry, thanks to their bonus versus large units. Of course, you should not attack War Bear Riders with them, but against most low- and mid-tier cavalry, they will be quite effective.

These Fiends are a good monstrous infantry unit to bolster your army's frontline. With their magical attacks with high armor-piercing damage and Devastating Flanker ability, they work well in conjunction with Marauders. 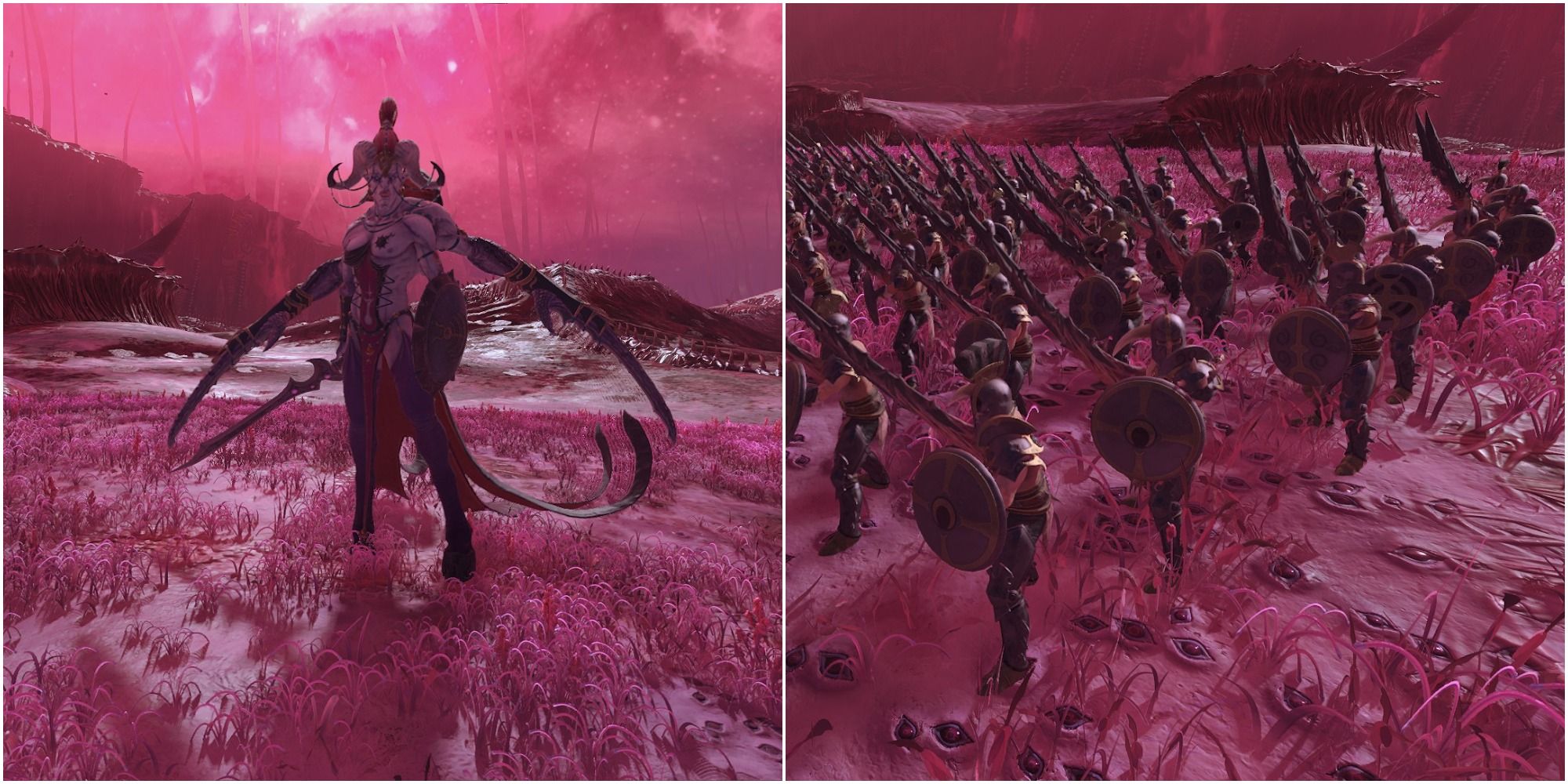 The Chaos Furies can be useful for Slaanesh in the early game, but when you can field (Heart)Seekers, there is not much reason to keep the Chaos Furies in your army. Then again, this is the only flying unit in the roster of Slaanesh, so if you want the flexibility of that in siege battles, Chaos Furies can remain somewhat useful. Just do not expect them to win a fight against any other flying units.

These Marauders with spears are not very cost-effective. Your Hellstriders of Slaanesh are an all-around better option to defend against enemy cavalry or large units. One or two of these Marauders can certainly help defend your flanks, but it is better to just seek supremacy with your cavalry force.

The Spawn of Slaanesh are unbreakable monstrous infantry. If you find yourself needing a more resilient frontline (although the playstyle of Slaanesh is more built around lots of fast-moving flanking attacks), you can add a couple of Spawn to support your frontline

The Hellstriders with Hellscourges are not an upgrade from regular Hellstriders, but instead fulfill a completely different role. They are melee cavalry with low armor-piercing damage. They are good for taking out enemy units with low armor, such as infantry or missile units, but in most cases, you will be better off going straight for Seekers of Slaanesh instead.

The Keeper of Secrets is a large monster that is very effective at killing enemy monsters. It also has high speed, so you can maneuver it easily to where it is most needed. The main drawback of the Keeper of Secrets is that it has almost no armor and no missile resistance, making it very vulnerable to enemy missiles. 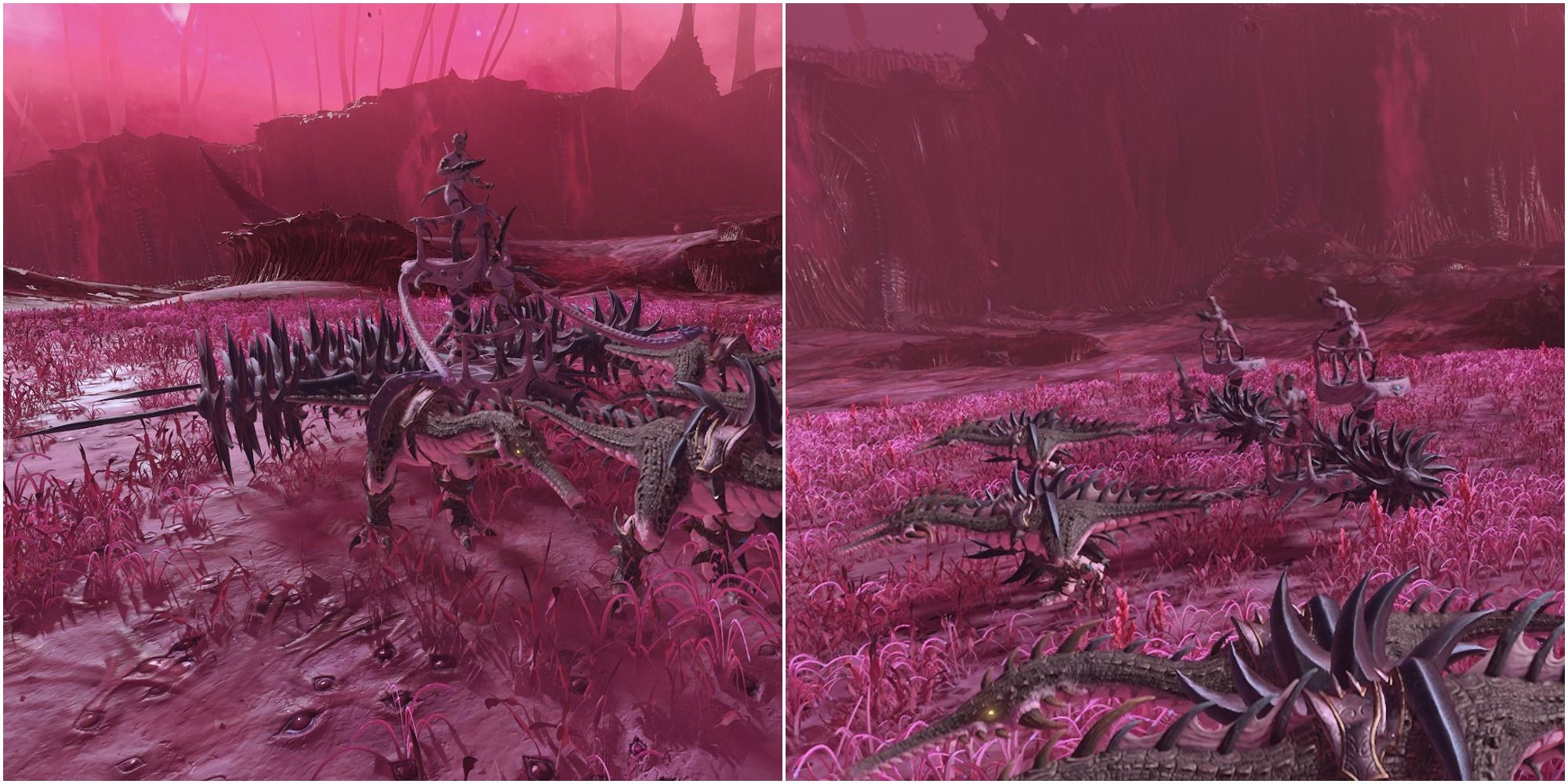 The Seeker Chariots are currently very underwhelming, in particular, due to their disappointing charge. Their charge is not very impactful, and they can lose even against warhounds and most cavalry units.

Just like the Seeker Chariots, with the Hellflayers you would expect a chariot with a devastating charge, but that is not the case in practice. Perhaps the chariots will be boosted in a future patch. Against infantry, the Hellflayers will be useful, but for their cost, they cannot currently be recommended, and you are better off using Heartseekers instead.

The Exalted Seeker Chariot is just as bad, if not worse, than the Seeker Chariot. It consists of just one entity that, for a high cost, again has a disappointing charge and is very vulnerable to missiles. Avoid this unit like Nurgle's plague.