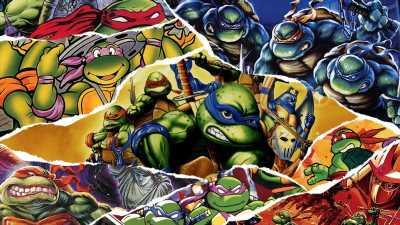 Do you have that food from your childhood that you just love, even though you know it’s not, objectively, that great? There’s something about the memory of that taste that is amazing, even if you know the sophistication of your palette has evolved a lot in the intervening years. That’s a bit how I feel about the early Teenage Mutant Ninja Turtles games. I can recall with crystal clarity being gathered around a TMNT arcade cabinet with my friends, pumping in tokens to try and beat Shredder before the birthday party ended. Or spending a weekend banging my head against the wall of the first NES game and its absurd sewer challenges. The Cowabunga Collection exists to service the nostalgic recollection of these types of experiences, and it does so with aplomb. Are these truly great games worth remembering? That’s up for debate.

Digital Eclipse and Konami have worked together to craft an especially impressive collection of early Turtles video gaming fun. 13 titles are available to peruse and enjoy, running the gamut between arcade, NES, SNES, Genesis, and Game Boy releases. At their core, these games are restored in a form very close to their original incarnations, and it’s a lot of fun to spend time in the ones you know to remember individual sequences and smile. If the phrase “tonight I dine on Turtle soup” rings some bells in your distant memory, it’s likely you may feel the same.

Even for TMNT enthusiasts, I’d be surprised if there weren’t a few surprises in the mix of included games. Familiar classics like the arcade version of Turtles in Time are certainly here, but there’s a good bet you might not have played everything else the collection has to offer. Peruse the list below, but I was happily surprised by the speed and level designs for Hyperstone Heist, which was a Genesis game I had not played when it first released. And the Metroid-inspired Radical Rescue, originally on Game Boy, was a particular highlight, offering a more robust adventure than I had expected.

Nonetheless, it must be said that many of these games (even the most fondly remembered ones) mostly fail to pass muster as truly stellar games in today’s marketplace. These were licensed games that were a product of their time, and many featured overly contrived levels, poorly structured boss encounters, or overly simplistic structures. It can be hard to separate the joy of nostalgia from the reality of what a game really is. However, having recently played the excellent Shredder’s Revenge, it’s easy to see the way that beat ‘em ups have progressed in the intervening decades. Likewise, it’s hard to imagine investing extensive time in a fighting game like TMNT: Tournament Fighters when we’re in the midst of such a renaissance in the fighting genre in recent years.

But to take these 80s and 90s games to task for being what they are misses the point. This is not a dramatic remake of these classic games, but rather a wonderful way to rediscover and archive what made them memorable. And in this regard, it’s hard to find fault. In each game, you can save and load at your leisure, letting you hop into any section you like until you get it right. Each game has a list of enhancements that let you tweak the experience, like setting alternate starting levels so you can see that last boss you never reached as a kid, or the ability to remove slowdown effects that were part of the original code when too many enemies were on screen at once. There’s an awesome “watch” feature that lets you observe an expert playthrough of any of the games to completion, and then jump in any time you want in the course of the playthrough. There’s even the option to change your region and see and play the Japanese versions of the games.

In addition, the Cowabunga Collection has an amazing and exhaustive collection of extra bonus materials to peruse. By entering the “Turtle’s Lair” portion of the game, you can examine early Konami design documents, listen to music tracks, check out comic book covers, and even investigate never-before-seen concept art. As a digital archive to these popular games, it’s a truly impressive resource.

While there’s certainly a lot to discover for new Turtles fans, it feels like the Cowabunga Collection is squarely targeted at older enthusiasts who want to relive the glory days, or perhaps have a more approachable way to enjoy the game with kids or other newcomers. In that regard, the game is a big win, and one could hardly ask for more. Even if these aren’t games I might recommend to today’s game players, they’re certainly an important page in the history of licensed video games,  presented here with almost every option you might wish to find.