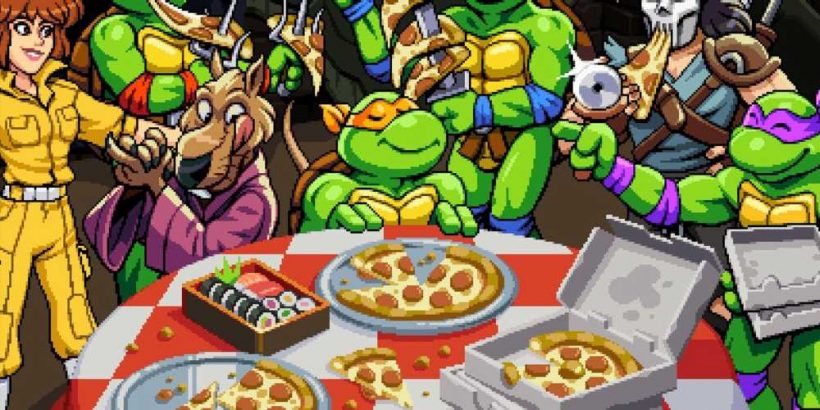 While playing Teenage Mutant Ninja Turtles: Shredder's Revenge, I'm reminded that the titular reptiles and the guys I lived with after college aren’t so different. All of us are united, healed even, by the power of a greasy slice.

During my last year of college, three of my high school friends — who were all working in the same area where we went to school — started renting the top floor of a duplex together in the nearest city. It wasn't much room for three adult men, and one had to sleep in a makeshift room where one of the walls was just a blanket draped between two real walls. Even so, when I graduated and got a job at the local Best Buy, I moved in, too.

The apartment was small, but it was big enough to facilitate my post-college excitement. I was an RA in college and the evangelical university I went to had a policy against drinking. If I was going to be expected to turn people in for breaking the rule, I felt that I needed to follow it myself, so I didn't drink alcohol at all while I worked for the school. (Now, years later, I would just not follow the stupid rule AND not turn anyone in for not following the stupid rule, but you live and learn.)

The result was that, when I graduated from college, I was in roughly the same place as a lot of people when they turn 21. The first few post-college weekends, my friends and I made trips to the local liquor store (which remains significantly better stocked than anything near where I live now) and, lacking any understanding of the finer differences between an IPA and a lager, or a porter and a stout, I bought a lot of beers on the basis of which label had the best vibes. 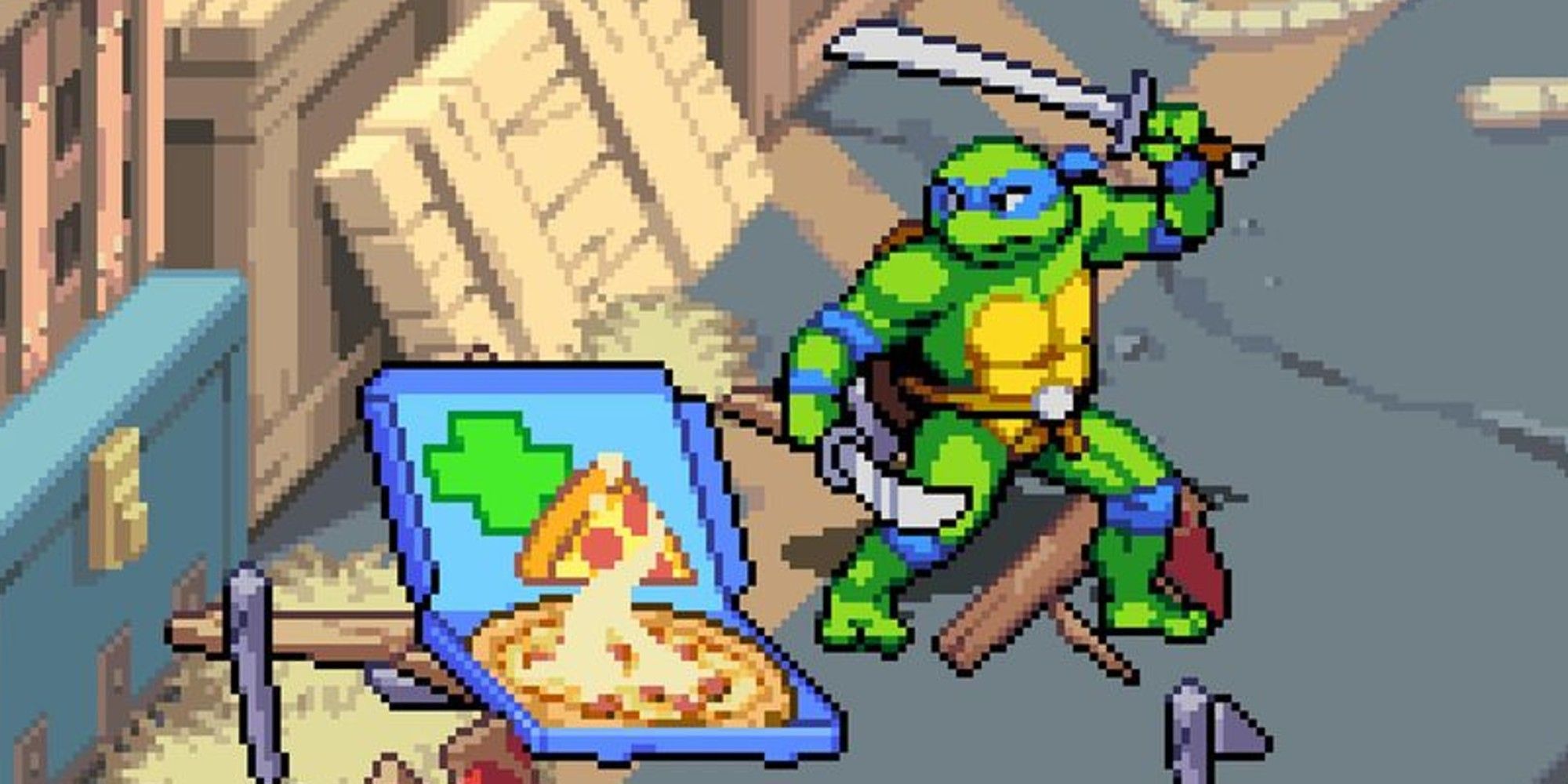 It was summer when I moved in and, in all my memories of that time, I'm either mildly or very sweaty. There was a Taco Bell a few doors down and a Hungry Howie's a little further down the street, so we were frequently eating junk food, drinking hard ciders, and watching TV. When we moved down the street to another rental owned by our landlord — this one a full house — that trend continued. We all got our own bedrooms, plus a full dining room. But, we still ate most of our meals on the couch, gathered around It's Always Sunny In Philadelphia or Rick and Morty on the TV.

So, instead of using it for eating meals — which the couch and, occasionally, a TV dinner tray, had covered — the dining room became the home for a fun group project that also gamified our junk food intake: The Pizza Wall.

Whenever we got pizza from a new place, we cut the lid off and mounted it to the wall. The collage included our favorite chains, like Jets, whose Detroit-style pizza gave our wall the rare rectangular box. It also included local joints — one from a glitzy bar and grill that served hearty deep dish and played music videos on chandeliers constructed from flatscreen TVs of decreasing sizes. On at least one occasion, a gas station with a surprisingly good pie got elevated to the wall. The project inspired us to expand our horizons beyond the chain location down the street, beyond joints we already knew we liked. If we were going to eat junk food, at least we could become experts on the wide range of junk food our region had to offer. 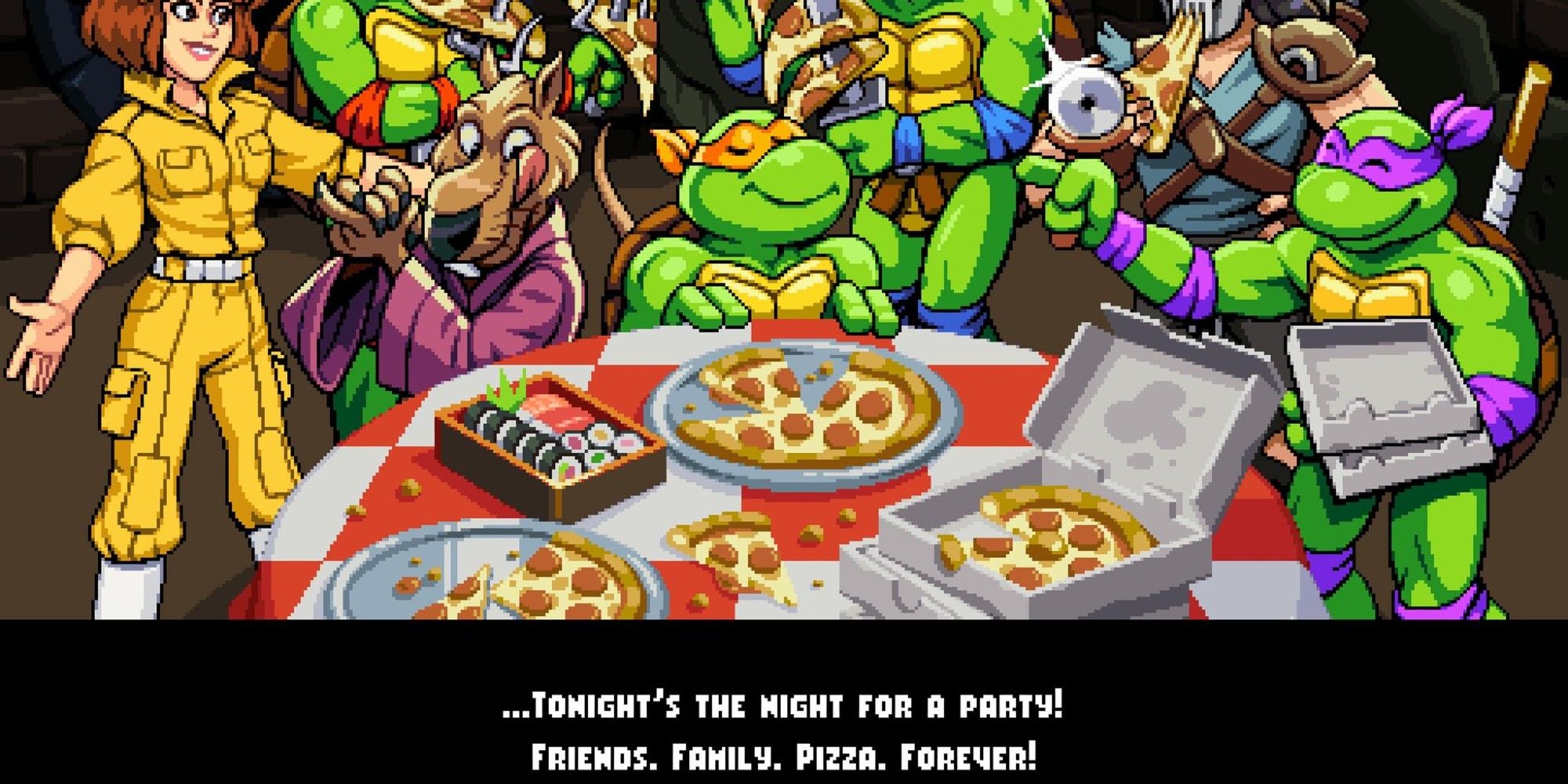 In the summer of 2017, one of my friends was getting married and preparing to move out of the house. On the last weekend that we all would be in the house together, we traveled to some of the remaining locations we had been meaning to hit. The most important stop was a tiny restaurant just across the state line that offered a massive 468 sq. inch pizza that the menu says "feeds between 6-10 people." We took that as a challenge and scarfed it down. The Pizza Wall finally had its capstone.

So, when I finished Teenage Mutant Ninja Turtles: Shredder's Revenge and got a congratulations screen where the gang was celebrating their victory by eating pizza, (the very snack that granted them health during missions) it made perfect sense to me. The wonderful combination of bread, tomato sauce, and cheese was, for me and the boys, both the victory and the means by which we achieved it.

When I got married in the summer of 2018, it was my turn to move out. But, the Pizza Wall remained. Now, four years later, my wife and I eat pizza every Friday night. Though we make our own, it's still a journey — not to find the best pie that a restaurant can offer, but the best recipe we can make for ourselves. This tradition isn't about pizza, really, and neither was the Pizza Wall. And, not to be blasphemous, but I don't think it's really about pizza for the Turtles either. Pizza is a symbol of community — a beautiful, whole pie that is made up of individual slices. When we share a slice, what we're really doing is sharing our lives together. And if that doesn't deserve a hearty "Cowabunga!", I don't know what does.