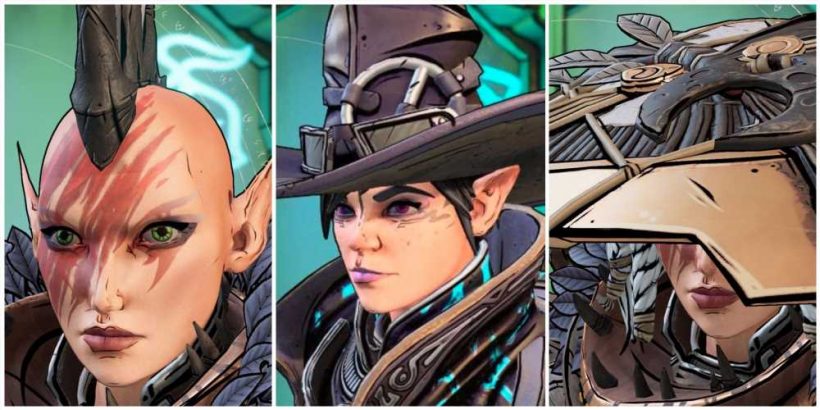 From the makers of Borderlands and the popular DLC Tiny Tina's Assault On Dragon Keep comes a full-fledged game that builds on the fantastic world of its predecessor. As with its parent games, Tiny Tina's Wonderlands is a first-person shooter with quirky cosmetics to spice up your hero.

All the available armor is designed in a way to be fashion and function, but the thirteen headgear pieces serve no purpose other than to look really, really cool. The following hats are cosmetic only and don't require purchase, but instead might need some boss grinding and a lot of luck. 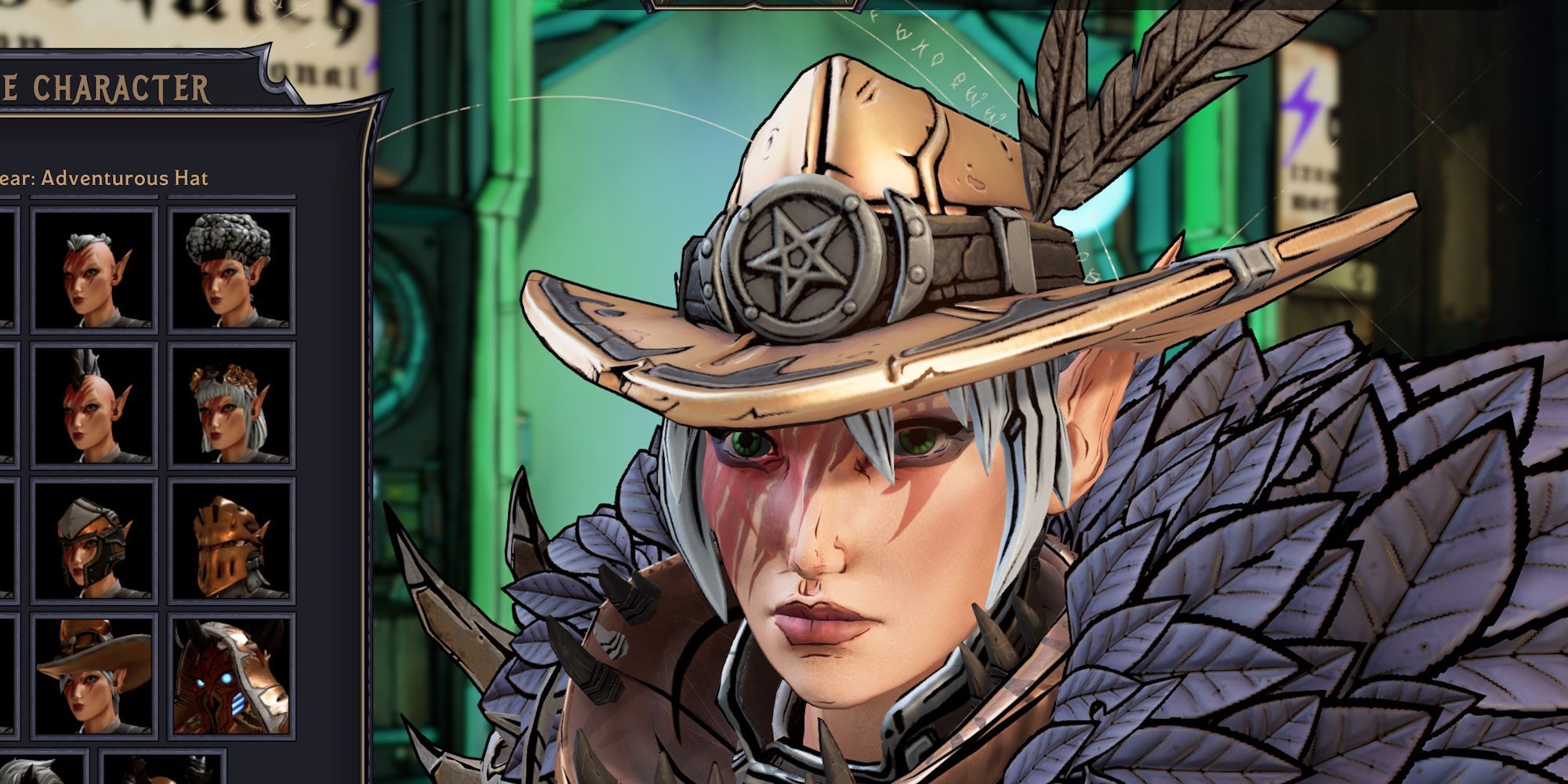 As with most of the names in Tiny Tina's Wonderlands, the Adventurous Hat is a kind of parody of a more common item in adventure games, the Adventurer's Hat. Homophones like this pop up throughout, such as the Bard-Barian (Barbarian) who accompanies you through the Weepwild Dankness.

This is where you'll find the initial boss, Banshee, who has the highest drop rate of the rootin' tootin' cowboy hat. Expect to grind her battle around 25 times if you want to sport the Adventurous Hat, sheriff. 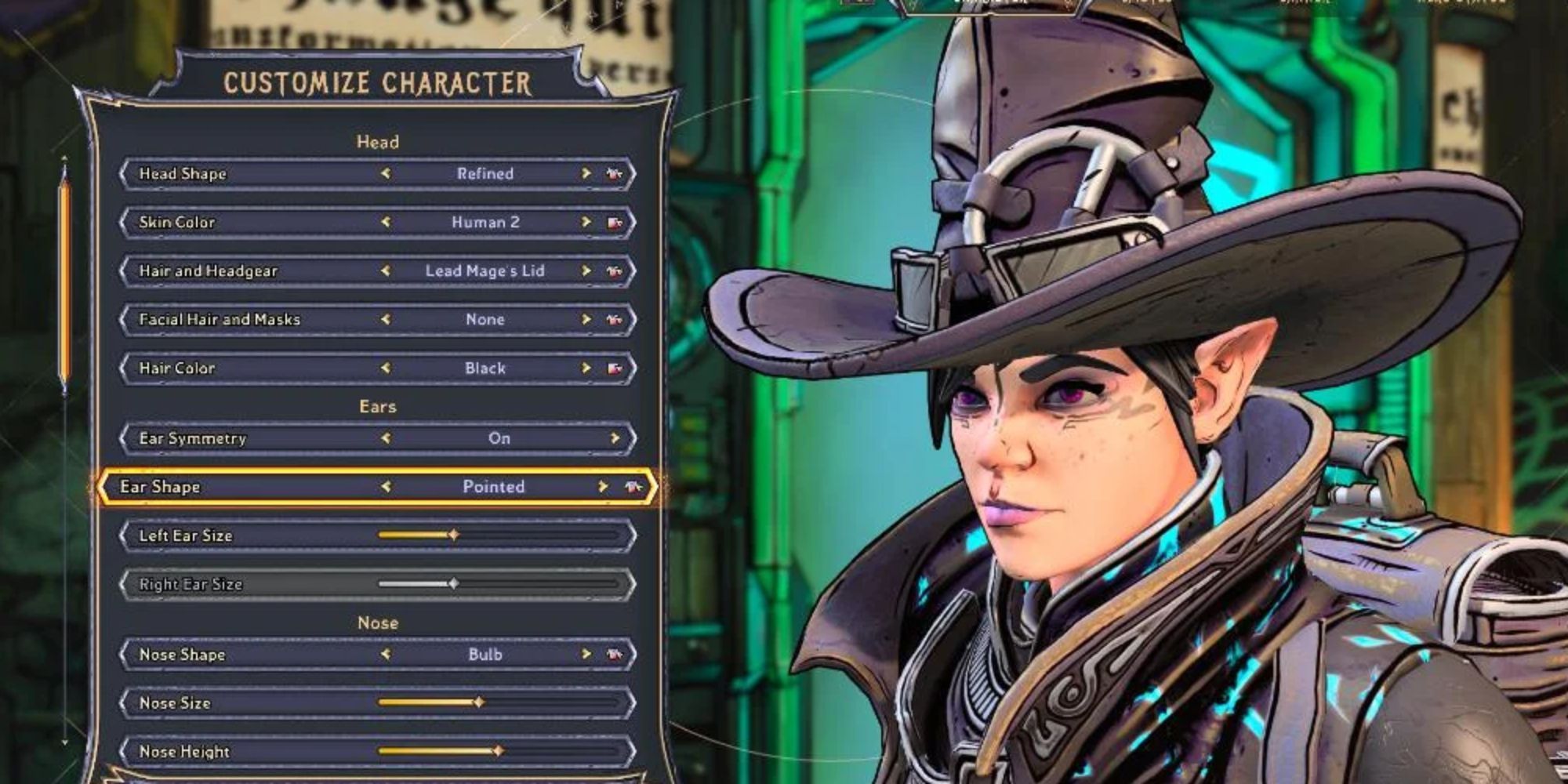 There are a lot of steps to follow in order to even get a chance at this punk wizard hat. The side quest Walk The Stalk is unlocked during Ballad of Bones, and is activated by talking to Magic Bean in Tangledrift.

To complete this quest you will need to defeat Parasite, which has three gruesome stages. As with all the loot in Tiny Tina's Wonderlands, the drop chance is low and the bosses' difficulty scales with the player level. 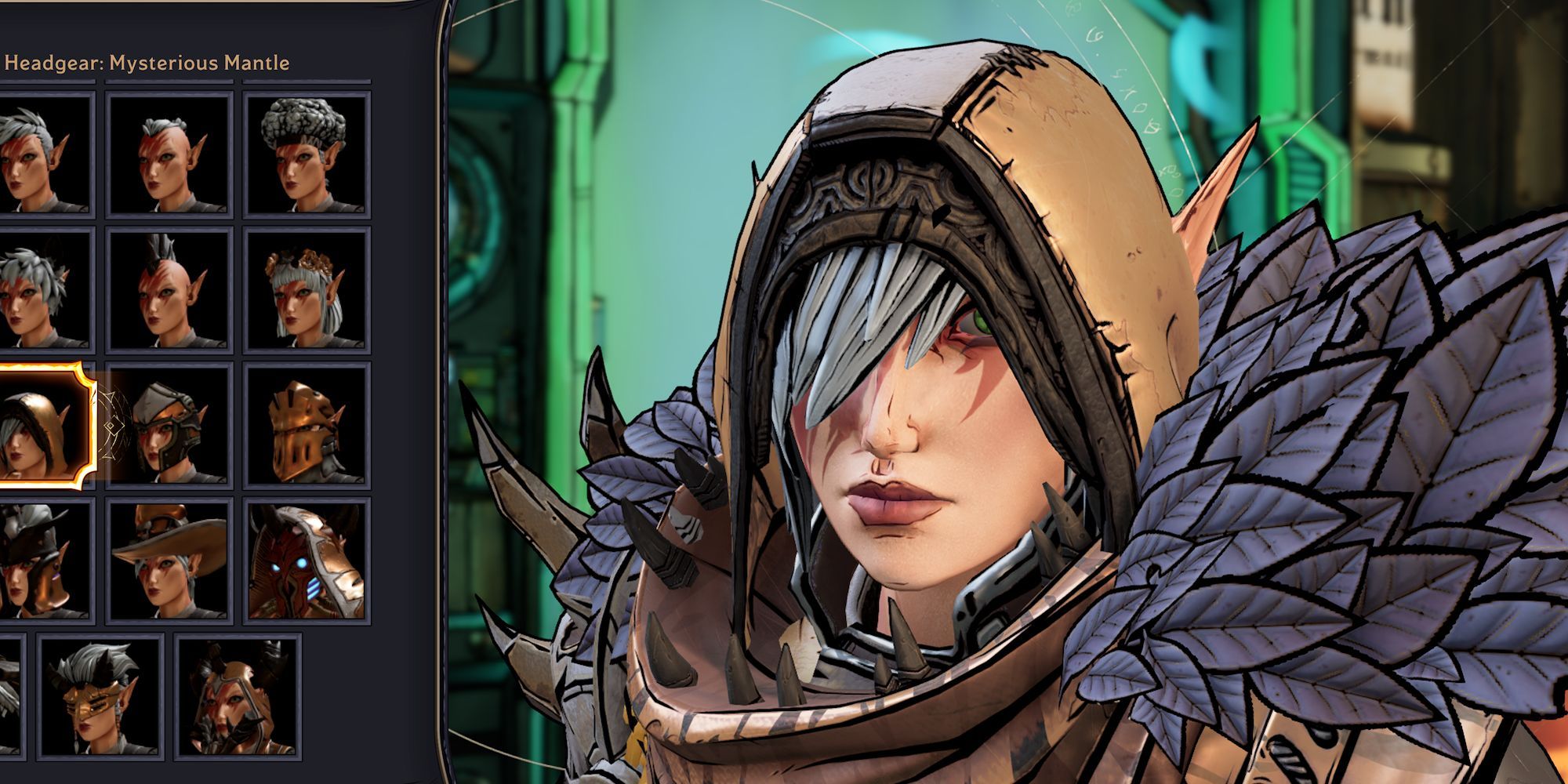 The tutorial boss Ribula sits at the end of the Valley of Snoring and is where players face their first real battle. For a practice boss, his loot is pretty good as he drops the Mysterious Mantle, a double hooded piece with three customizable sections. If you don't get it the first time you can always head back to the start and try a few more times.

Collecting Lucky Dice and completing Aaron G's Shrine increases your chances of picking up any of these cool cosmetics. 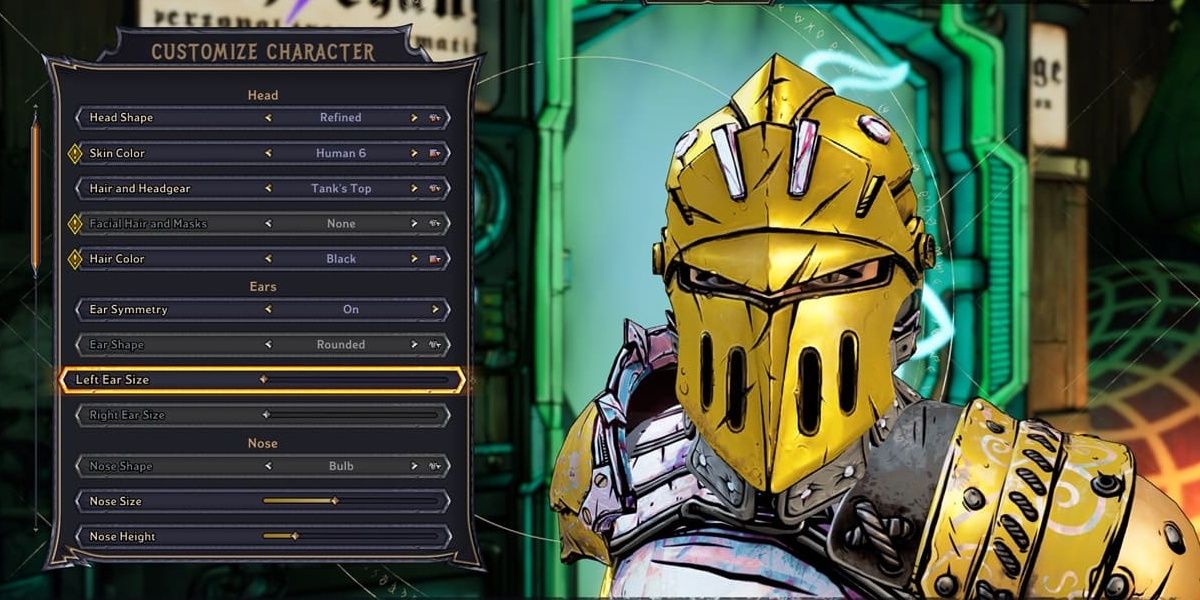 No, not a tank top. Tank's Top, a scowling helmet design that'll make your Fatemaker look like an old noble knight. As with most rare cosmetic items, this hat can drop from anything that has loot, though most of the other pieces have designated enemies that are much more likely to leave something cool behind. That's not the case with Tank's Top as there isn't anywhere in particular to grind for it.

Increase your luck skill, try boosting your chaos level, and trash some overworld encampments – this is one of the most difficult headpieces to obtain, but definitely worth the trouble. 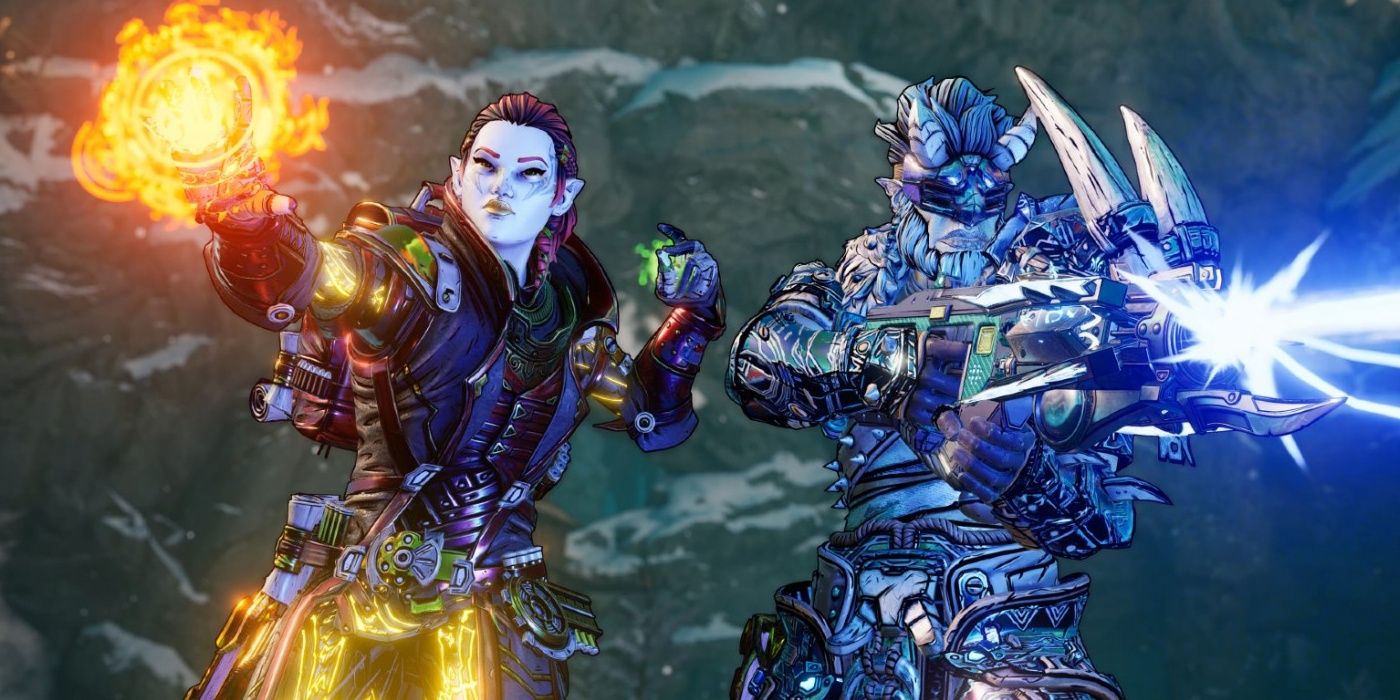 In order to don this grouchy, horned facade another side mission will need to be completed in the final stages of the game. At the end of the Ditcher, the player will face Salissa, a boss vulnerable to fire and lightning damage. Bear that in mind when it comes to your weapon selection.

To customize this outfit and any other, you can visit Brighthoof or the Chaos Chamber and go to the Facial Features option. Here, you can try on headpieces you've come across as well as change their color schemes or armor theme. 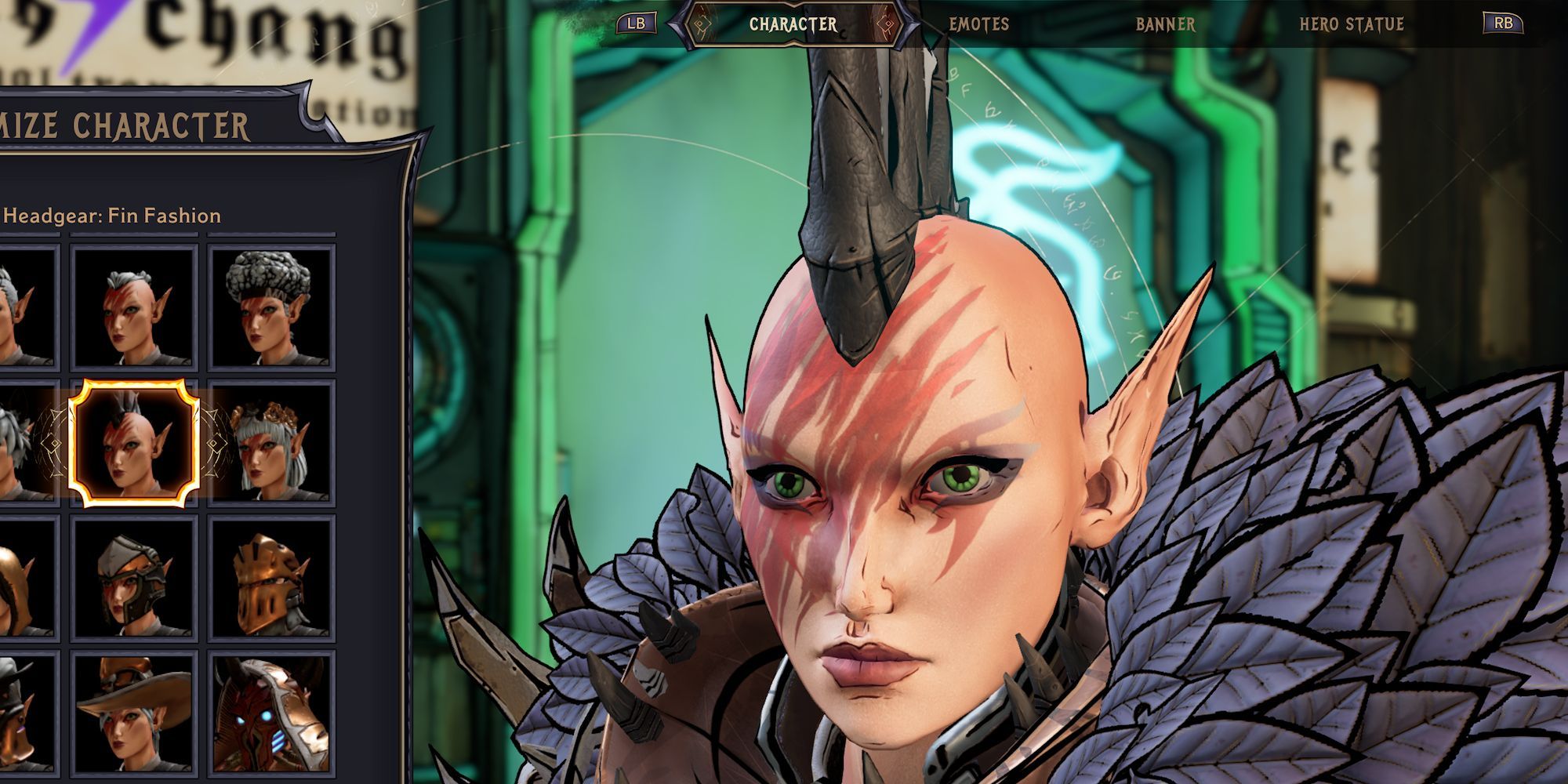 Who doesn't want to look like a prehistoric fish? It's certainly very intimidating, which is necessary if you plan to defeat a Dragon Lord. Unsurprisingly, the Fin Fashion mohawk is usually dropped by the Lord beyond the Drowned Abyss, Dry'l. He is accessible after completing the Mortal Coil questline, but prepare yourself for a worthy foe. This guy isn't giving up his cool 'do easily.

Dry'l has three phases with three attacks in each, and three health bars to get through, too. Most attacks are AOE in a small arena, and you're not guaranteed to get the Fin Fashion Hair on the first go as usual. 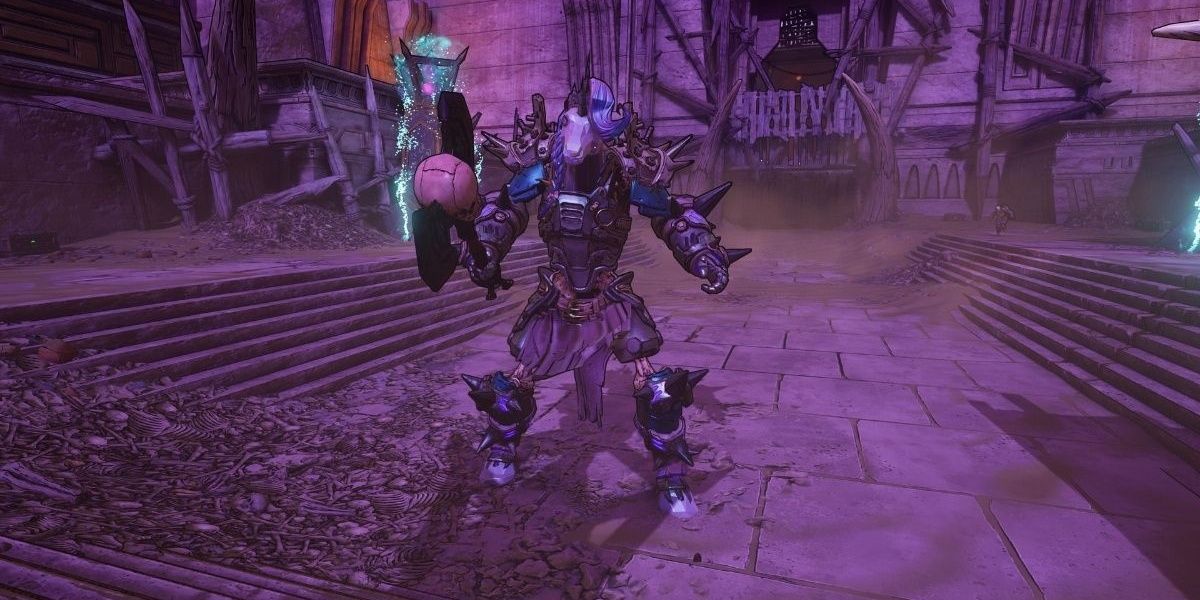 Dress up your vicious, ruthless fighter in a sweet flower crown to match the oxymoronic themes Tiny Tina's Wonderlands bring to life. The Knight Mare (another homophonic play on nightmare) resides in Ossu-Gol Necropolis, and hides behind a grind of smaller enemies.

This late-game boss is the keeper of the coveted Flower Wreath headpiece, so if you want your Fatemaker to be a pretty elven princess, it's time to get battle-ready. 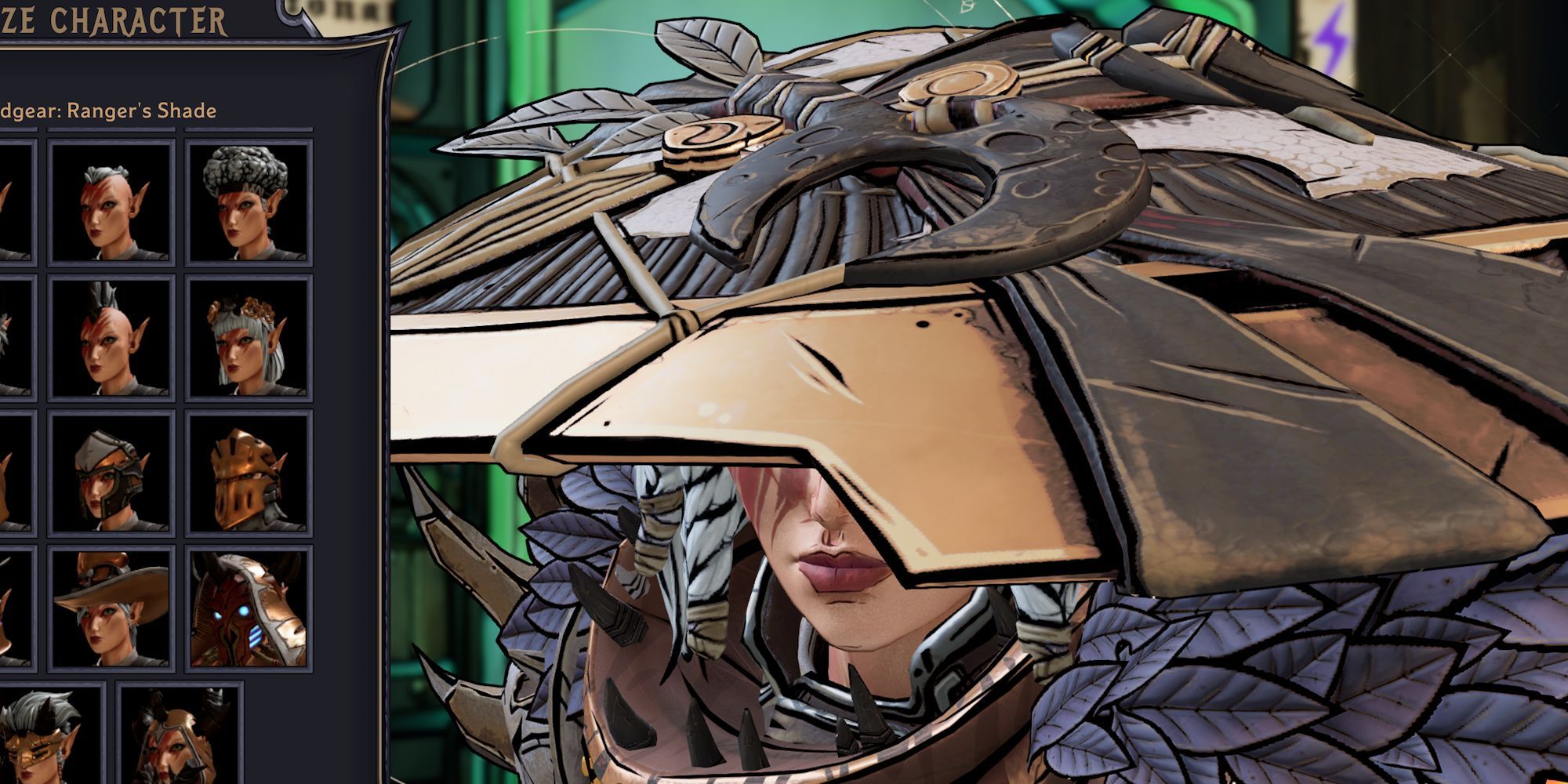 Crouched on a mountainside, sun in your eyes, eyes locked onto your target. What you need is this nifty Ranger's Shade. It won't actually provide any shade, but all your undead friends will think you're cool. Particularly Wastard's ghost, who sends you on a mission to defeat his body which is being puppeted by the Dragon Lord.

Upon completing the Son of a Witch mission there's a chance for Wastard's corpse to drop this sweet, sweet booty. 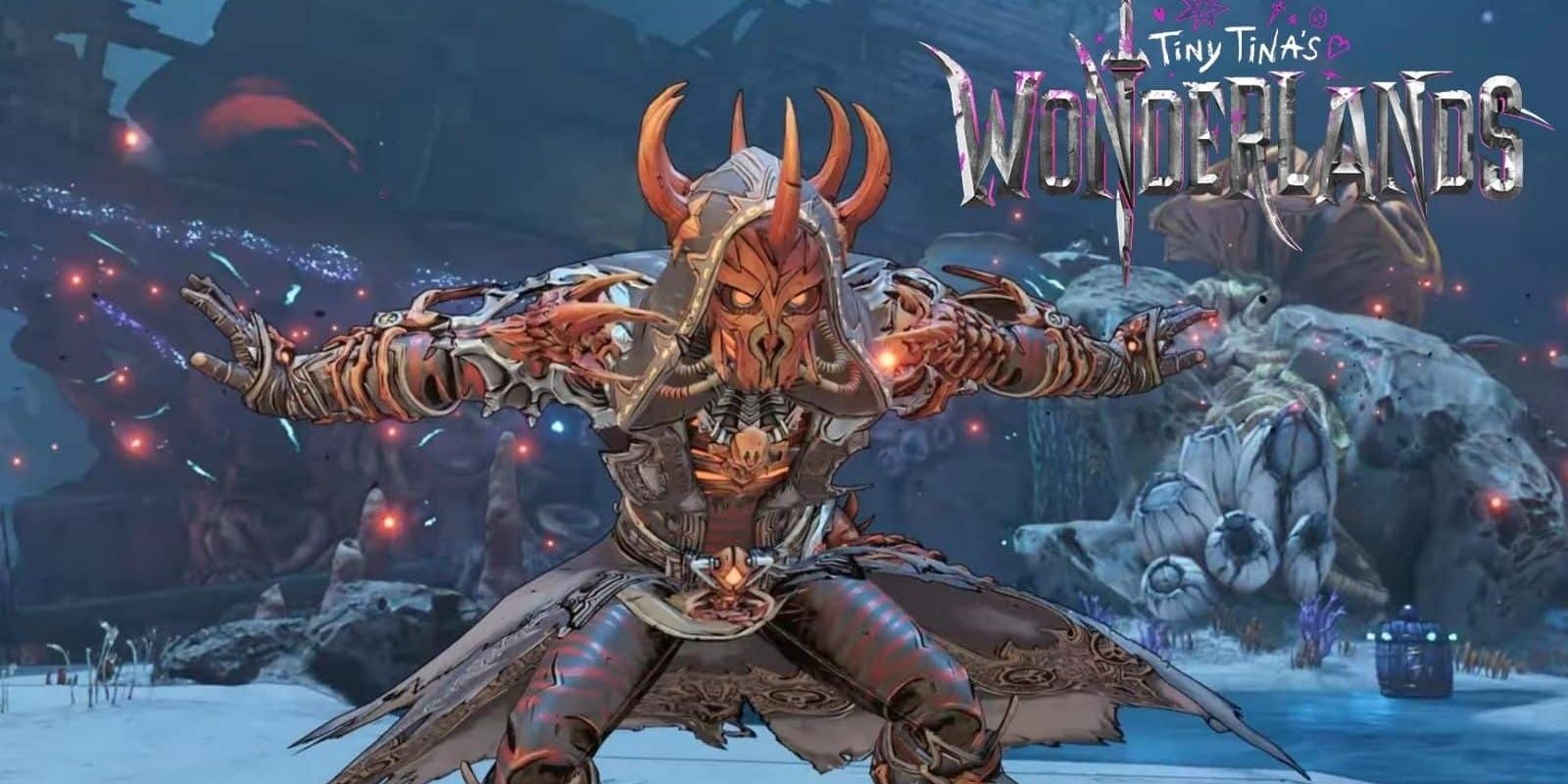 Another fancy hat to find during the Ballad of Bones is the Skull Cap. Typically, this style of hat is a small, unadorned fabric wrapped around the head. However, this is Tiny Tina's Wonderlands, so you know nothing is typical here. This headgear has glowing eye sockets, a customizable skeletal face, and fierce horns jutting from within a simple cowl.

One of the most intimidating-looking cosmetic items in the game, it's worth reuniting Bones Three-Wood with his crew thus gaining access to LeChance for the chance of picking it up. 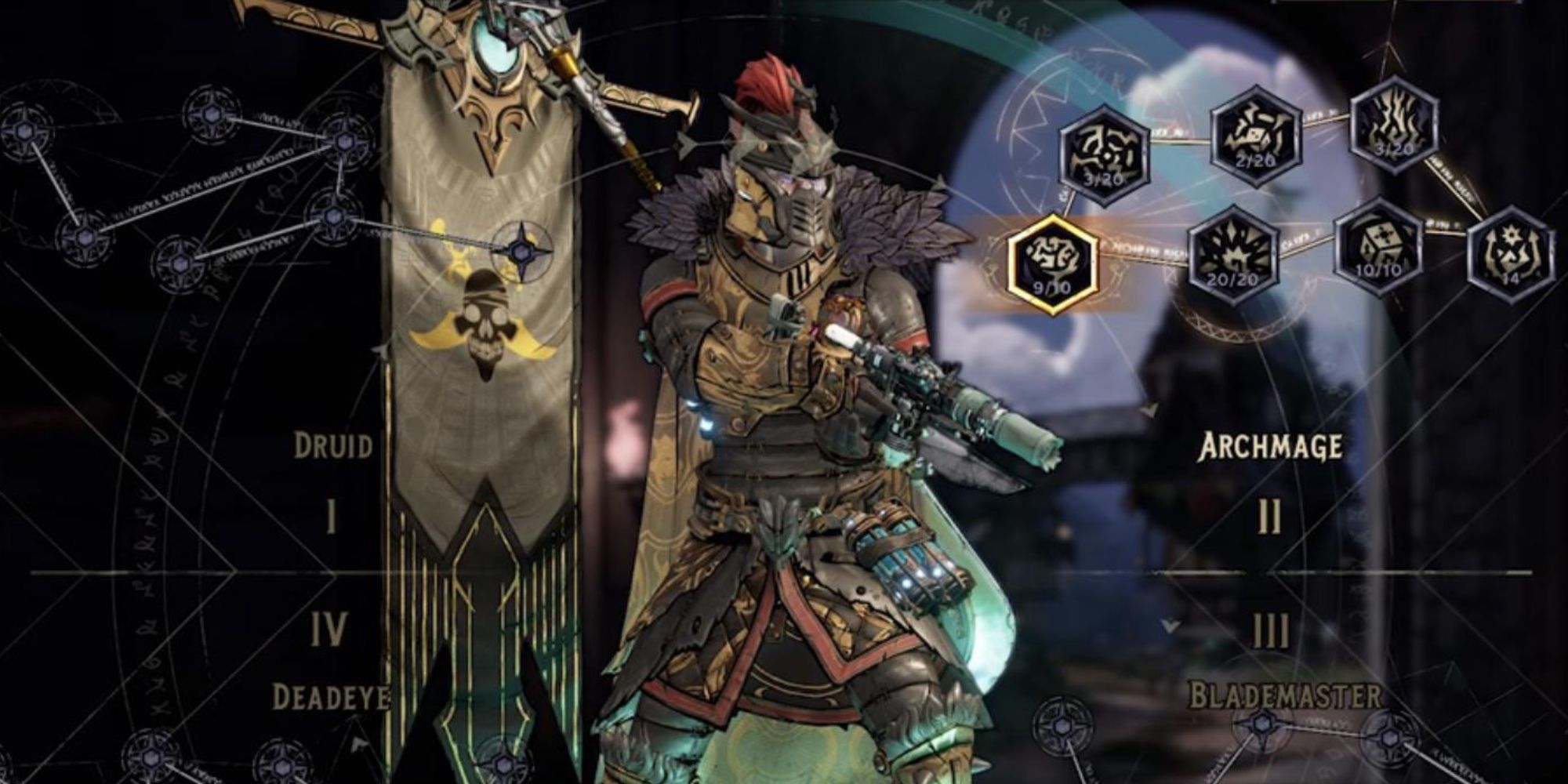 Finally, the best hat which is available really early in the game, the Draconic Dome. The winged brow is reminiscent of the Barbaric Brows hat, but this has its own tiny dragon statue poised at the front as well as a fancy tail which is customizable in Brighthoof and the Chaos Chamber.

To get a chance at this gear, you will have to defeat Zomboss, a pretty simple zombie boss (did you guess?) that can be attempted as many times as needed for this one, rare drop.