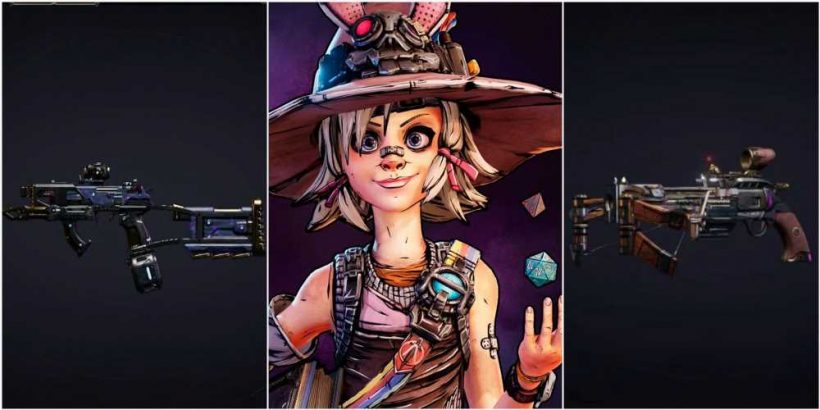 Legendary weapons in Tiny Tina's Wonderlands are difficult to come by, often only drop from specific bosses, and/or are hard to find in the wild. Legendary weapons typically have such a scarce drop rate that it can require hours of farming on top of the hours of collectible hunting for Luck Dice to crank up that Loot Luck.

So, nothing quite matches the excitement of the first time you see a gold beam shoot up from a loot drop. Not all Legendary weapons are created equal, though. While their base stats and effects typically remain the same, not every weapon you loot will carry the same "oomph." Let's look at the best Legendary pistols you can find in Tiny Tina's Wonderlands. 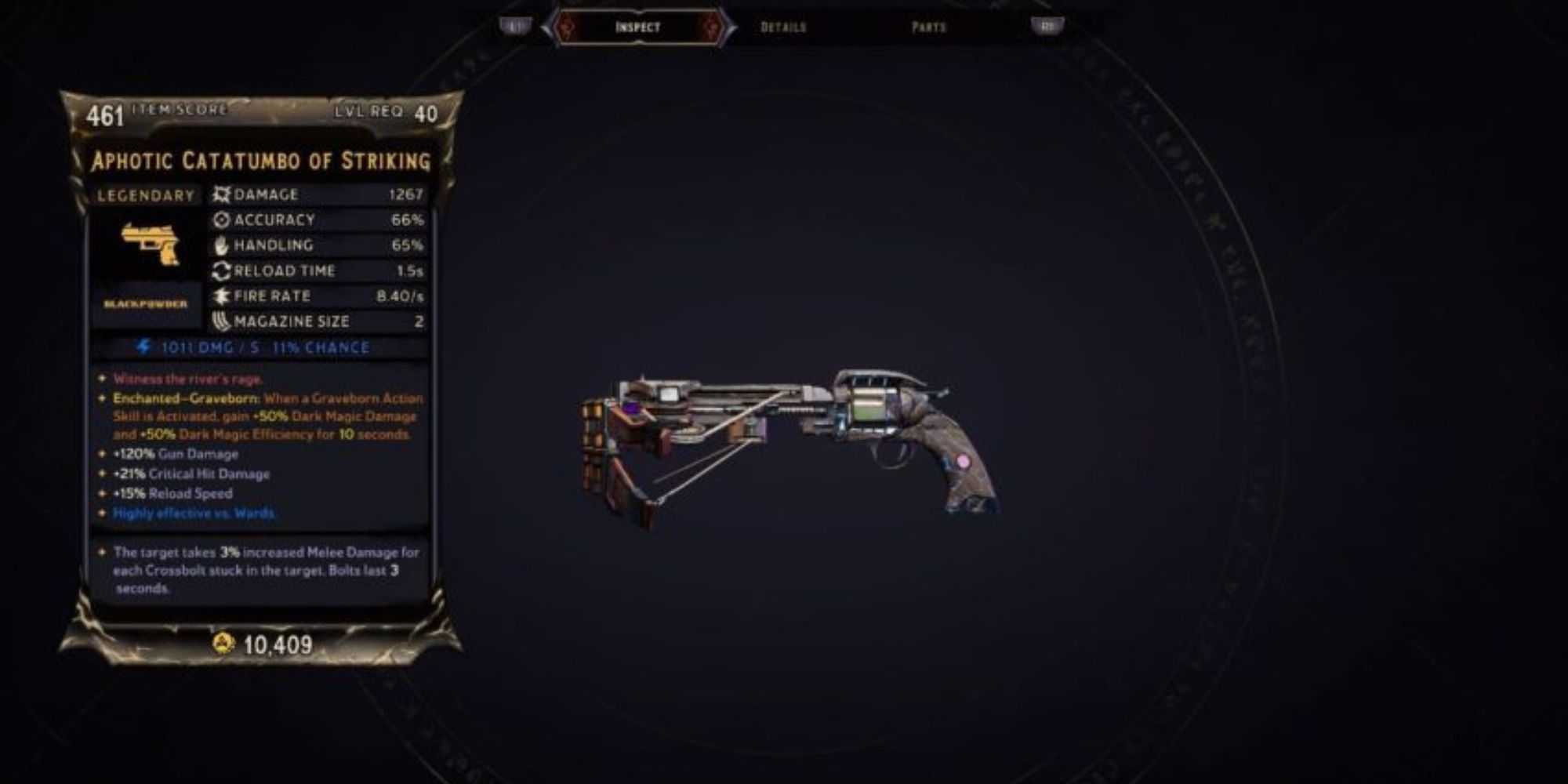 This Legendary pistol has the potential to really pack a punch. Not only does it deal lightning damage, but it allows you to do extra Melee Damage against enemies if they have a Crossbolt already stuck in them. Not to mention, the stats on this pistol come with extra Gun Damage, Critical Hit Damage, and Reload Speed. If you can pick one up with high percentages in each stat, you are truly ready to go Rambo. Catatumbo is a random world drop Legendary, which means it can drop from any good old mob. 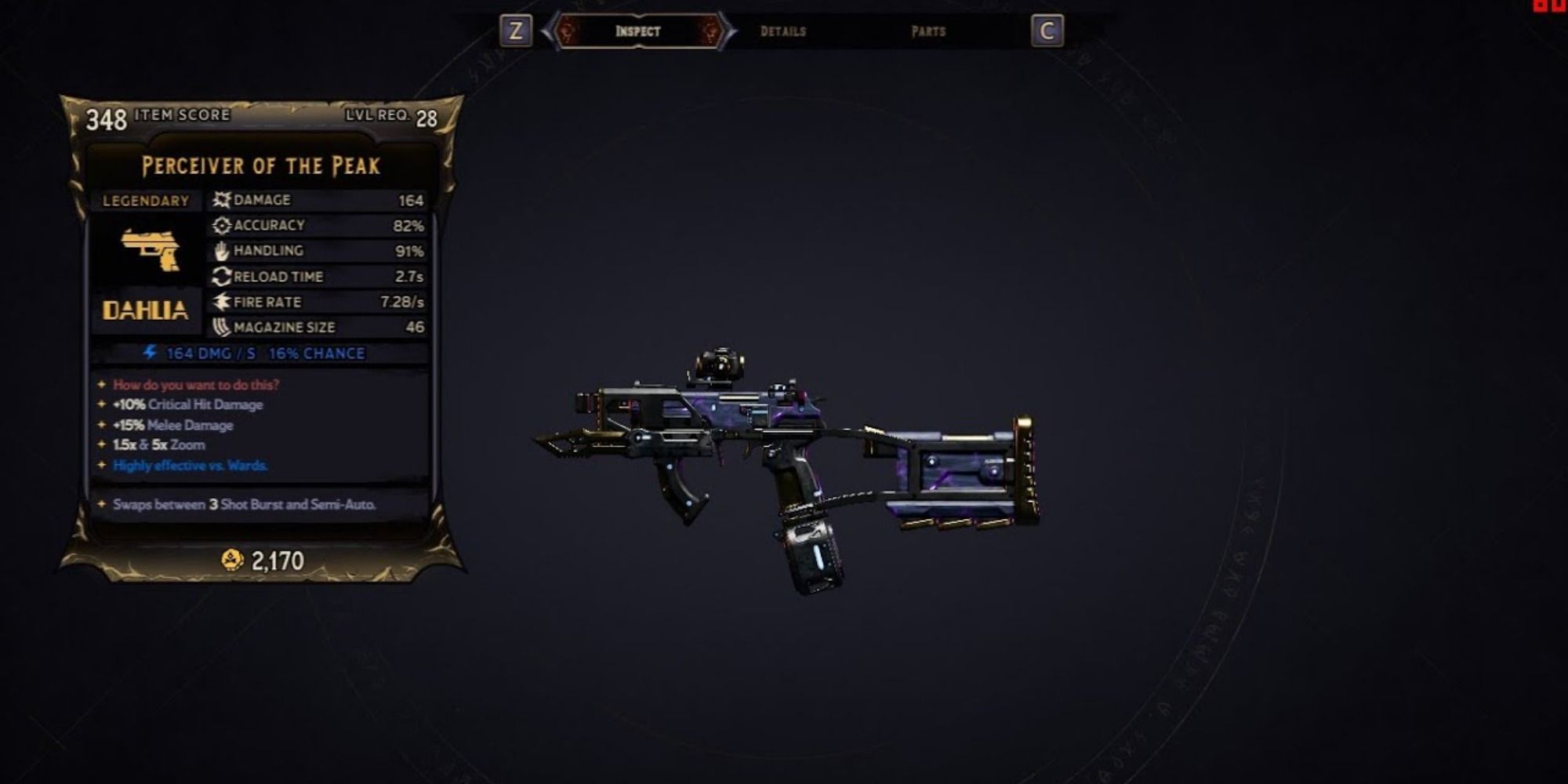 The Perceiver deals extra Critical Hit Damage as well as extra Melee Damage, so on top of the lightning damage it has that can really help crack a tough enemy's ward, with the right stats it can be a real kicker.

This pistol can also toggle between burst damage and semi-automatic fire, so you get the best of both worlds. It drops from the mini-boss Oculus, found at the Ancient Obelisk in Sunfang Oasis. 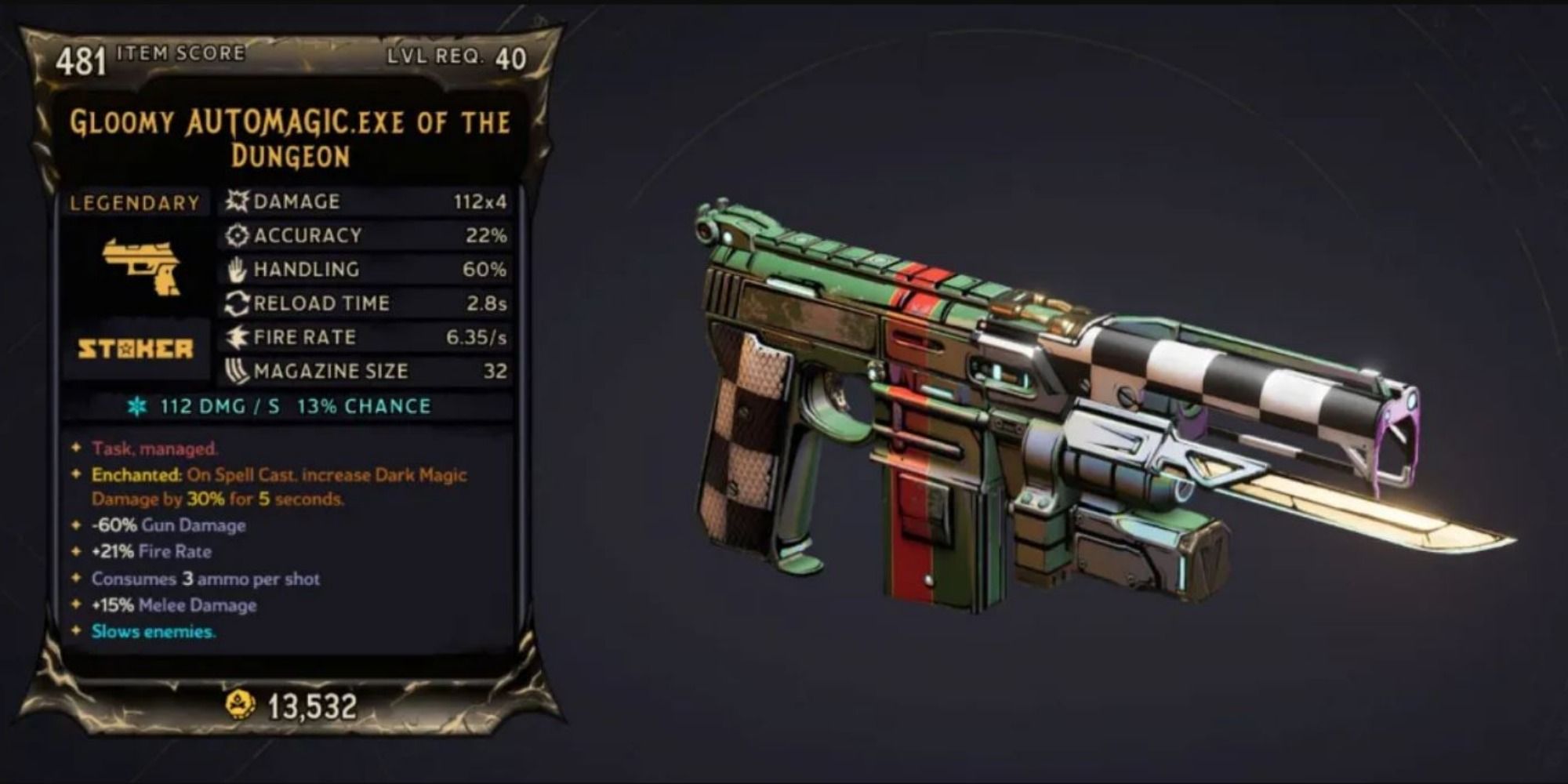 While this pistol has the potential to take a ding when it comes to Gun Damage, it typically comes with a faster Fire Rate. When coupled with the fact that this is an Ice Damage weapon that slows enemies as they are being shot, it really makes up for the lack of punch. This Legendary Pistol has a chance of dropping after winning the Banshee boss fight in Weepwild Dankness. 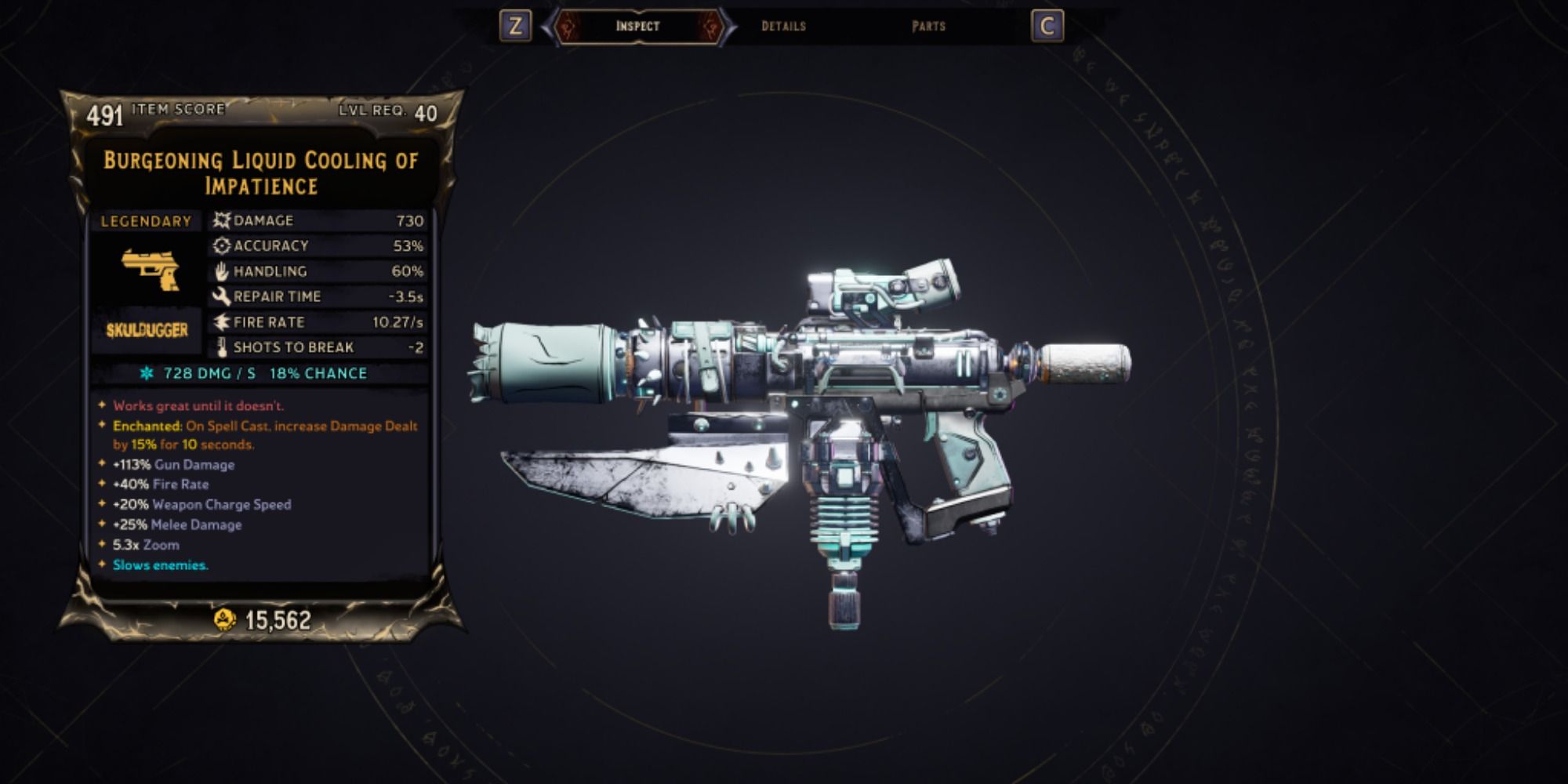 In its essence, the Liquid Cooling Legendary pistol is just a better version of the Automagic.exe. It gives you all that Ice Damage without sacrificing Gun Damage and still has extra Fire Rate, Weapon Charge Speed, and Melee Damage to boot. You can farm the mini-boss Lissia at the Ancient Obelisk in Crackmast Cove to try and loot this Legendary pistol. 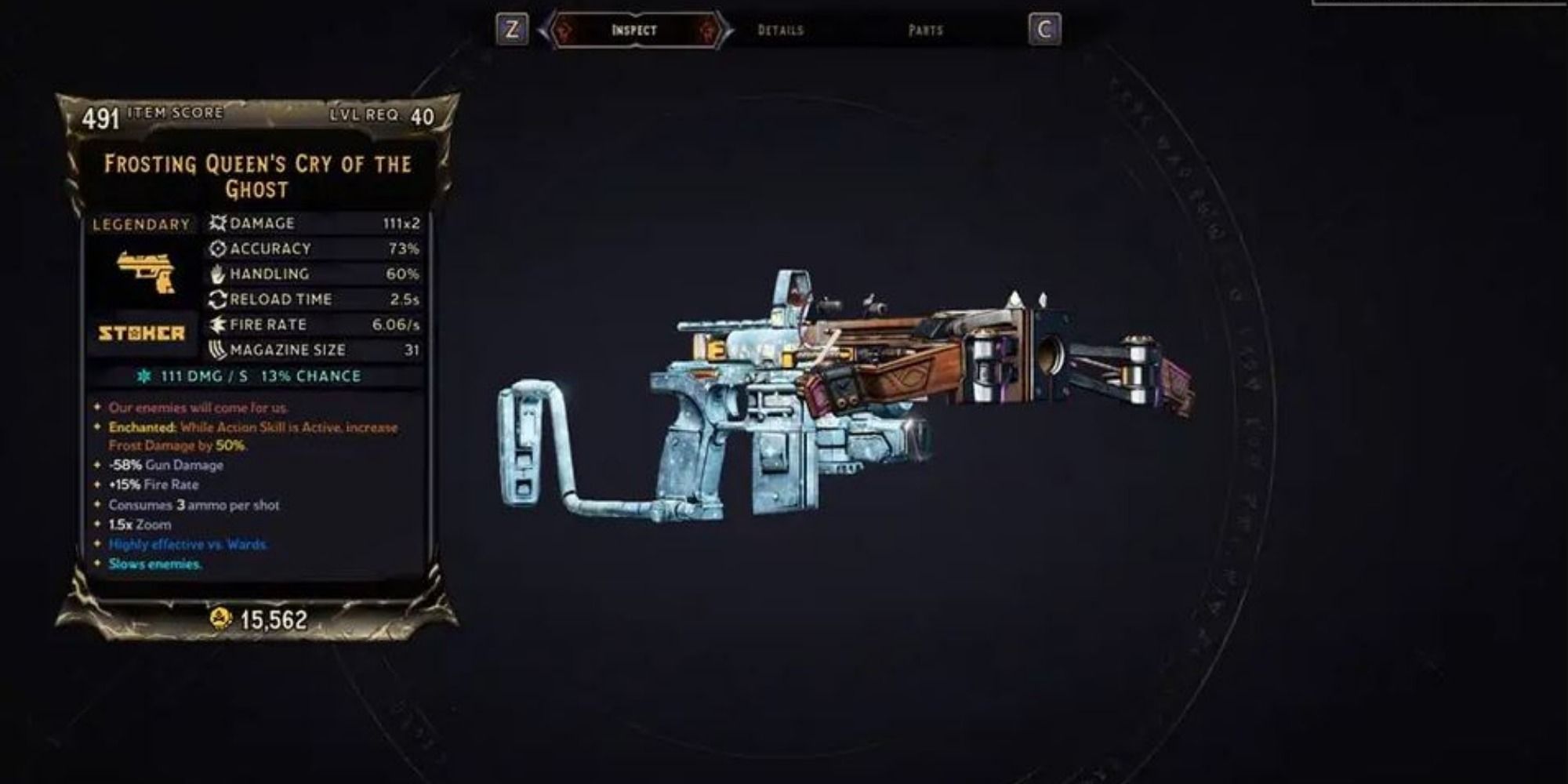 The Queen's Cry pistol is perhaps the best of all the Legendary pistols with Ice Damage. It might take a ding in Gun Damage like the Automagic.exe, but it has an improved Fire Rate and also is highly effective in cracking through enemy wards.

This makes for a weapon that slows your enemies down considerably even has you are tearing down their shields. This Legendary weapon, fittingly enough, can be dropped in the boss fight against The Maker, a secret fight against Tiny Tina herself unlocked in the Chaos Chamber. 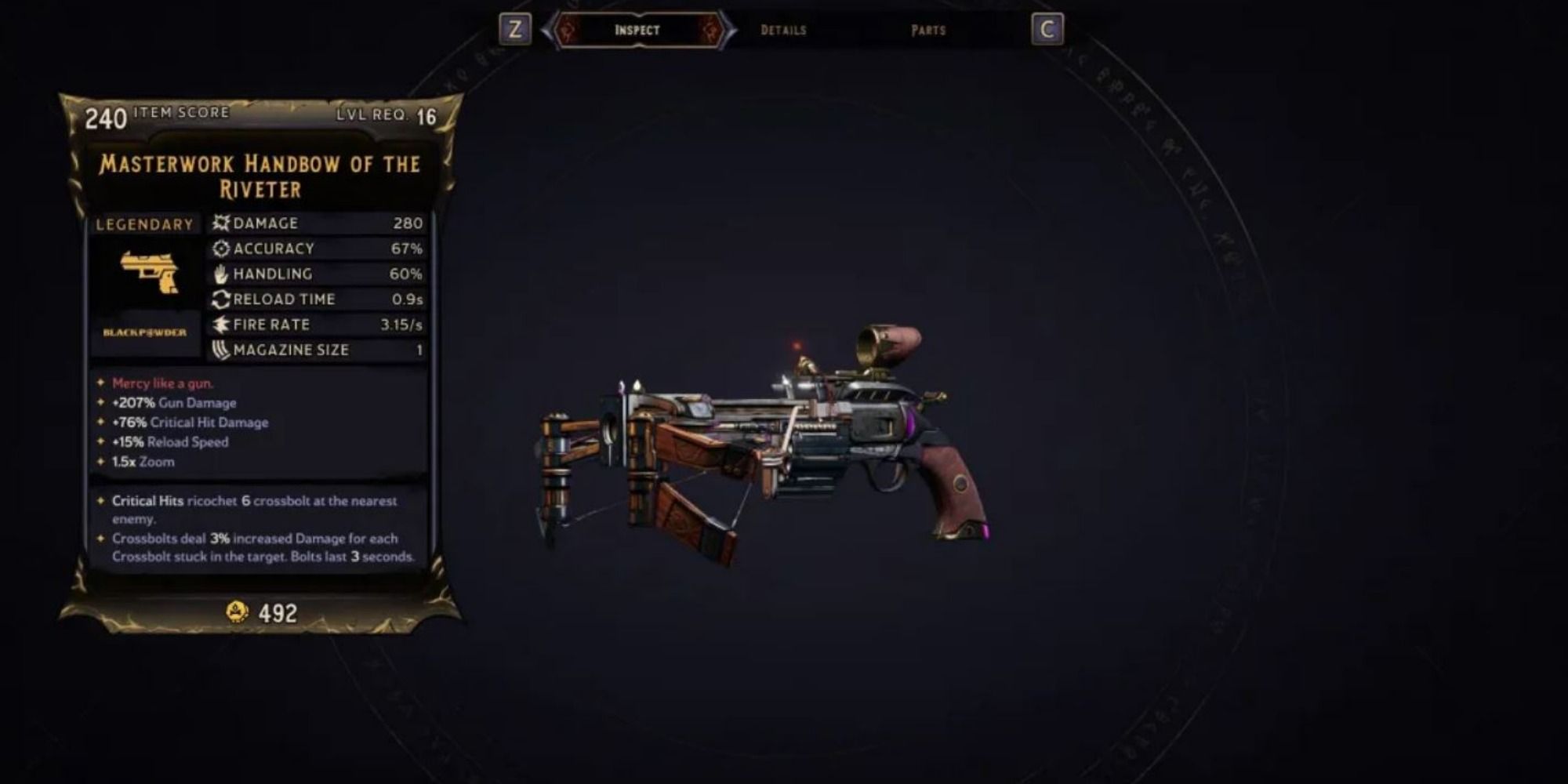 This pistol kind of slaps. It is literally a critical hit machine. It amplifies both your gun damage and your critical hit damage, so on top of the ricochet buff and passive damage increase to enemies that get "stuck," the Masterwork Handbow is quite the killing machine. It has a chance of being dropped from the Captain Swallow mini-boss in the Dungeon Door in the Nocean that contains a Shrine of Grindanna piece. 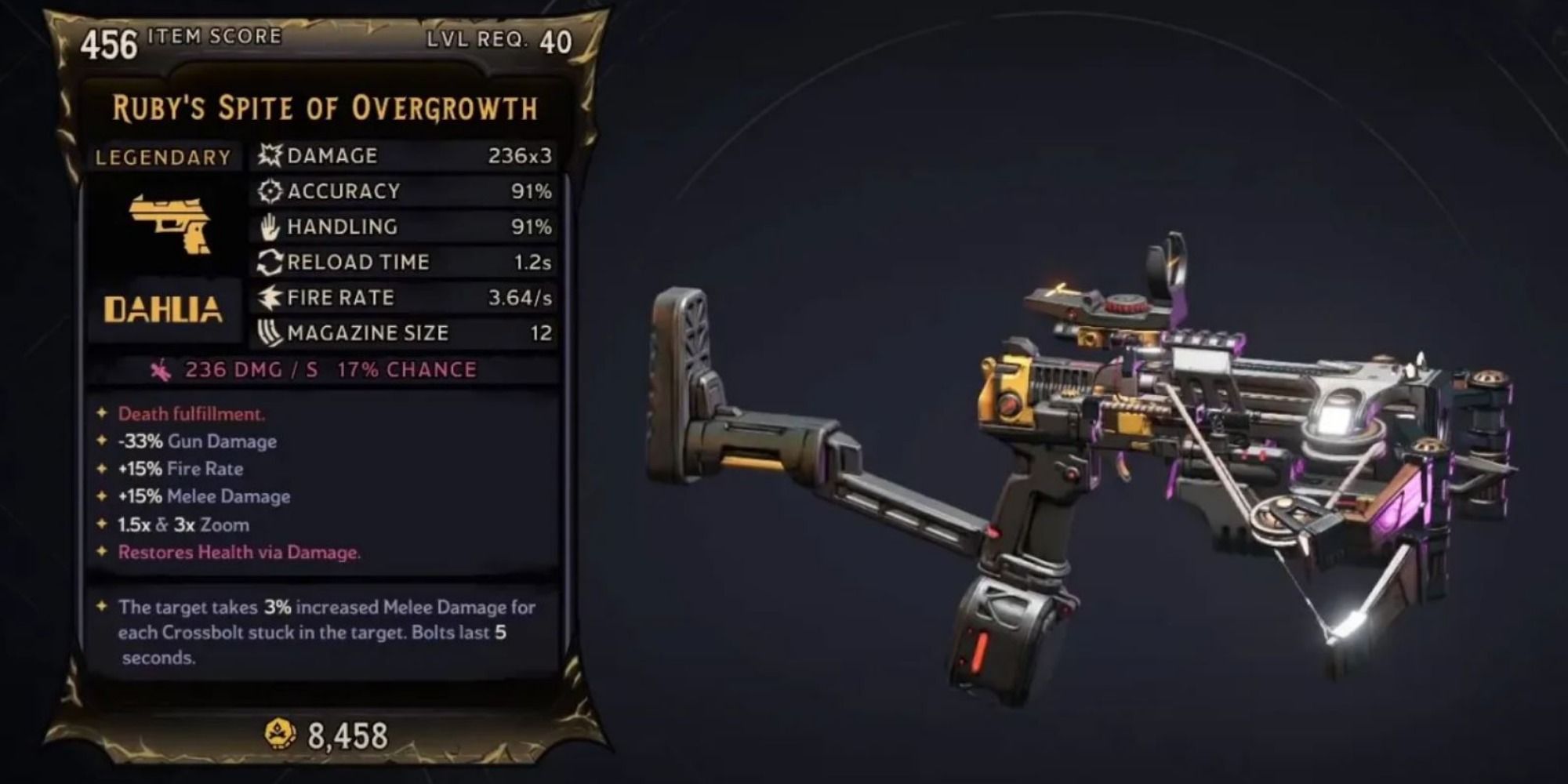 Any weapon with the buff that restores your health via damage dealt is a steal, but the Ruby's Spite Legendary pistol is top tier. It has an increased Fire Rate and Melee Damage, but the real kicker is the buff that increases your Melee Damage on any enemy stuck with a Crossbolt. Time to get bonking.

There is a higher chance of looting this Legendary after battling the Monstrous Shroom mini-boss that spawns at the Ancient Obelisk in Weepwild Dankness. 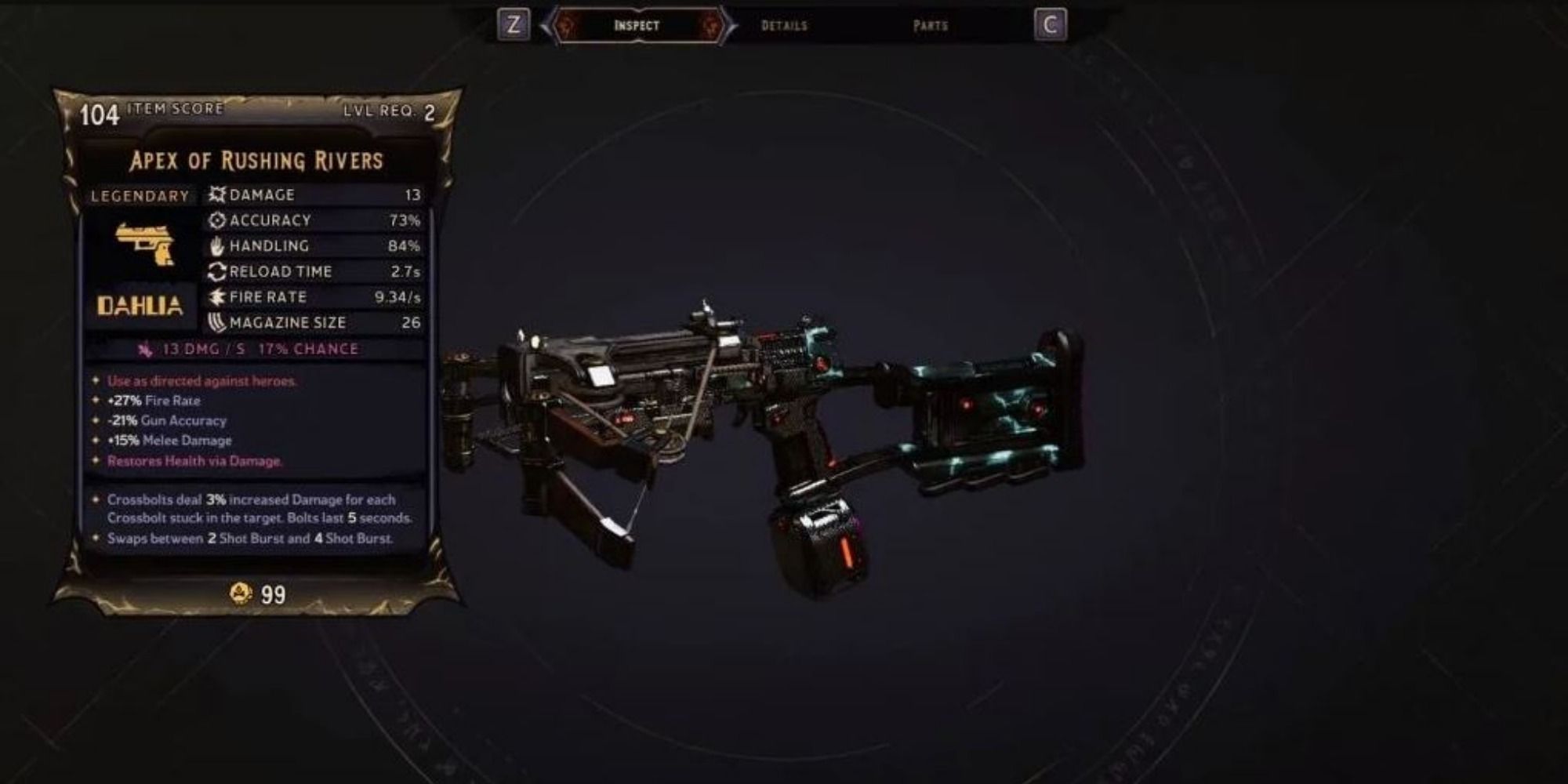 The Apex might be less accurate than other Legendary pistols, but who needs accuracy when you have a higher Fire Rate? On top of the fact that the Apex restores some of your Health for every hit of damage, it also ups the damage you lay into foes for every Crossbolt that sticks to them. You have a greater chance of this pistol dropping during the Dragon Lord boss fight at the very end of the campaign in the Fearamid. 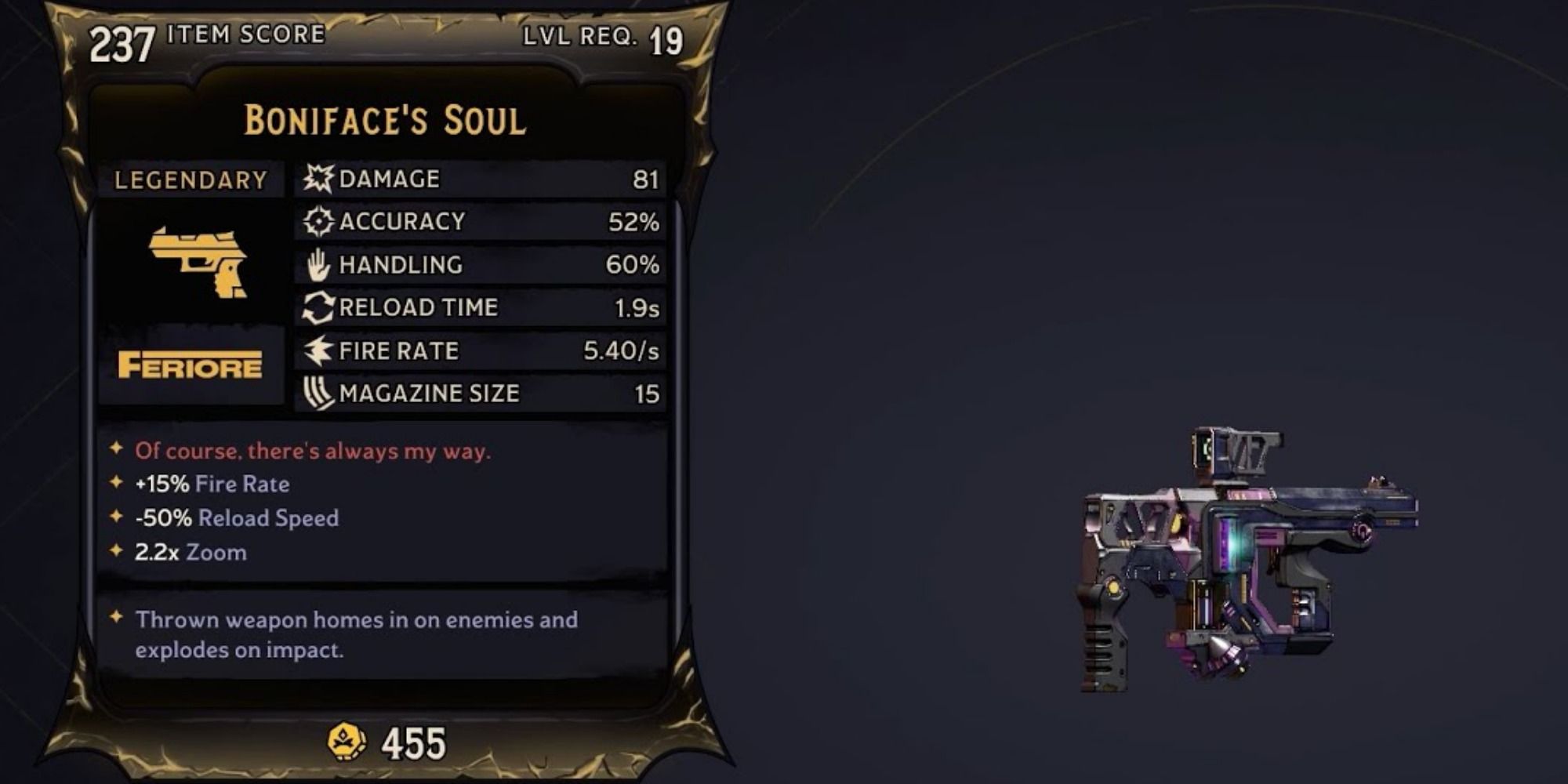 We love a gun that turns into not a gun. Boniface's Soul is one of the few Legendary pistols that, when reloaded, will be "thrown" at your opponent. Essentially, it becomes a homing missile, exploding when it finds an enemy. That being said, it also takes longer to reload, but we think the trade-off is more than worth it. This beaut will drop from the Mushroom Healer in Weepwild Dankness, found around the Snot's Pot area. 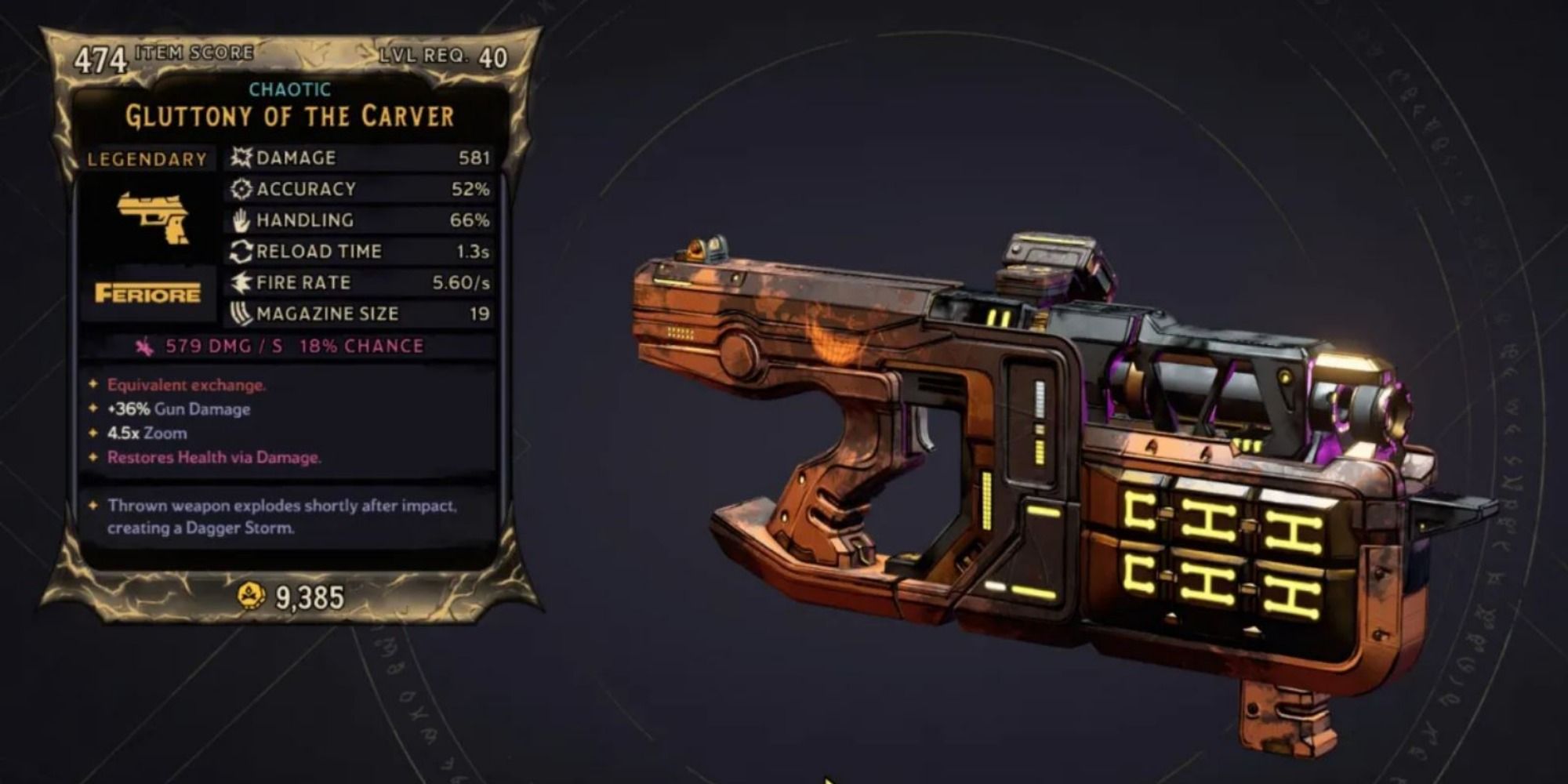 The only thing better than a gun is a gun that shoots knives. With a combo of restoring health and a thrown weapon reload that literally summons a Dagger Storm, Gluttony is a top-tier Legendary pistol. Plus an increase in your Gun Damage? Game over, man. For a better chance of looting Gluttony, you can farm Droll the Troll at the Ancient Obelisk in Queen's Gate.