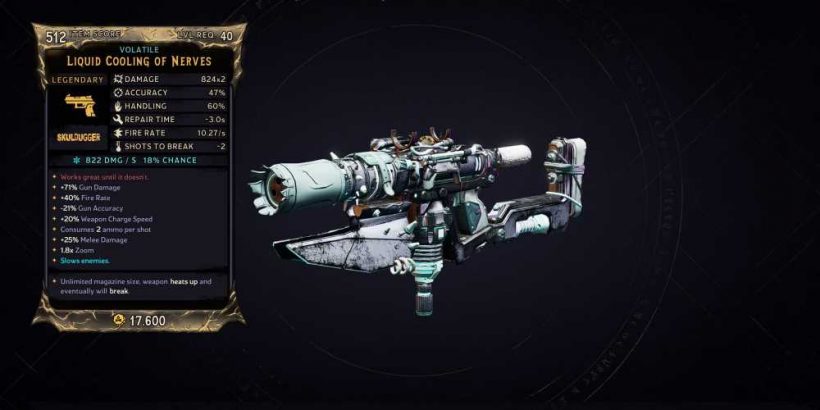 Borderlands fans have found the best gun in Tiny Tina’s Wonderlands. It’s called the Liquid Cooling, although you’ll likely find it with various prefixes and suffixes thanks to the Borderlands gun naming system that Tiny Tina’s Wonderlands alters to be slightly more fantastical. The gun is considered the best in the game for its ability to dish out immense amounts of frost damage without ever having to reload, provided you use it with the right build.

Liquid Cooling is a Skulldugger pistol, which is the Wonderlands version of the Children of the Vault-style guns from Borderlands 3. This means that Liquid Cooling would normally heat up with continuous fire until it finally overheats, requiring the player to wait before it can be fired again.

However, Liquid Cooling's ability prevents shots from heating up the gun provided they're critical hits. Careful aim and a crit-based build mean that the Liquid Cooling never overheats, which means you'll never have to reload. You can just keep spewing bullets until you run out of ammo.

Combined with the ability to freeze targets to prevent them from being a threat, Liquid Cooling is far and away the best gun in Tiny Tina's Wonderlands. It's so good that one player spent an entire day farming for the perfect roll and nobody in the Reddit comments said anything about that level of dedication (with thanks to GamesRadar for the spot).

There are a few ways to get a Liquid Cooling. According to Squad State, it's a world drop, so you could just randomly come across one during your travels, but the surest way to get a Liquid Cooling is from the Obelisk in Crackmast Cove. That Obelisk is guarded by Lissia who doesn't spawn until you fend off a few waves of skeletons, so it's not the fastest farm by a long shot. Another suggested farm is the Pistol Rabbit at the end of the Chaos Chambers.

However, you get your Liquid Cooling, best get it fast. Something that's this broken is likely to get nerfed by Gearbox in the next patch.