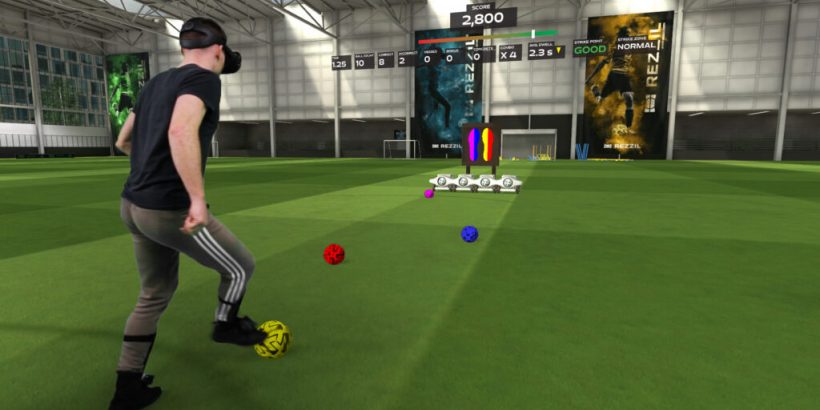 Due out later this summer for Oculus Quest is the football-inspired fitness title Rezzil Player 22, from British virtual reality (VR) specialist Rezzil. Today, the studio has announced the completion of a new £2 million GBP funding round which saw some big names from the footballing world take part.

The round saw high profile investors including Thierry Henry, Gary Neville, Vincent Kompany, Michail Antonio, Tyrone Mings and Anthony Watson take part, all because they see VR as an evolution in training. The company started out with Rezzil Elite – previously know as Rezzil Player 21 – designed as a training and analysis tool for professional football clubs. You can find a free version of this called Rezzil Index on Steam for Valve Index and HTC Vive, with Vive Trackers required to track your feet.

Rezzil Player 22 for Oculus Quest will be even more consumer-focused, providing a range of activities all designed and tested by UEFA pro licensed coaches to get those energy levels up. As the headset can’t track your feet the core modes focus on improving heading skills so you can accurately nut one into the back of the net. Other modes also feature basketball and tennis-inspired drills.

“As a father, I can see the appeal of Rezzil for children and it’s exciting as a parent because the combination of e-sport and traditional sport means they’re being healthy and active when they’re playing as opposed to a sedentary game,” says Thierry Henry in a statement. “I’ve been involved in football for many years but I honestly believe Rezzil is one of the most promising technologies to enter the sport. In sport we’re always looking for an edge over the competition and Rezzil provides just that. There are so many applications, from training and rehabilitation, it was an easy decision for me to get involved.”

As a training aid, it can be used anywhere, which allows players of all levels, who may not otherwise have access to a pitch or others to work with, to train in their own time, at their own pace. There is so much potential for Rezzil, both within elite sport and as a consumer product and it aligned perfectly with my vision of having investments that I’m passionate about,” Neville adds.

As Rezzil continues to expand its VR training solutions and when it reveals the launch date for Rezzil Player 22, VRFocus will keep you updated.