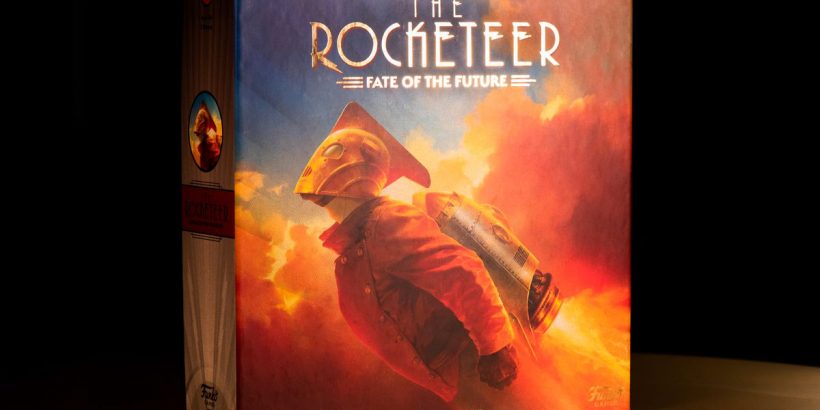 Funko Games has been on a tear lately, chewing up pop culture licenses and spitting out excellent budget-priced and mid-tier family board games. Now it’s partnered with Disney to reinvigorate the 1991 film The Rocketeer. Announced on Tuesday, The Rocketeer: Fate of the Future is designed for two players only. It goes up for sale Sept. 16 for $24.99.

Released in 1991, The Rocketeer initially flopped at the box office. Decades worth of VHS and DVD reprints later, it’s now considered a cult classic. It’s even available to stream on Disney Plus. That makes Fate of the Future just the thing for parents introducing the franchise to their kids for the first time.

The goal is to keep the plans for the hero’s rocket-powered backpack away from the other player, and to gather up victory points along the way. Once the included plastic Luxembourg Zeppelin has traveled by map to Los Angeles, it’s game over.

Funko Games’ interpretation of the film uses six characters, all rendered as plastic miniatures, with three on each side of the table. There are worker-placement elements to the game, which means that different actions will be available to you depending on where you place those characters. Players will also have access to multifunction cards, which can be used either to fuel generic actions like move and fight (“tussle” in game terms) or for special abilities. It all adds up to what sounds like a fast and furious little 45-minute game.

The Rocketeer: Fate of the Future goes on sale at this year’s Gen Con tabletop gaming convention in Indianapolis, Indiana. So far, many publishers have pulled out of the convention citing concerns about the ongoing resurgence of the COVID-19 pandemic. Others are having difficulty getting stock shipped from overseas due to an international shortage of shipping containers. That could leave Funko Games sitting pretty on a stack of gilded copies. The game will also be available at retail stores soon after the convention.