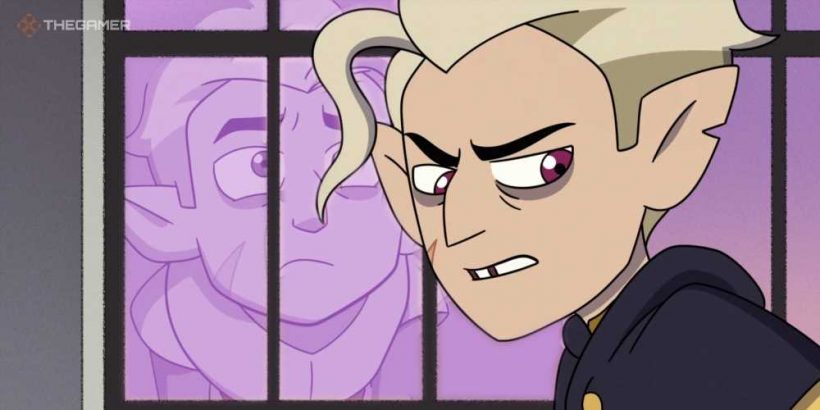 Hunter is so precious. The Owl House’s Golden Guard began as a primary antagonist who soon evolved into a bad boy gone sad with an undeniably warm heart beneath his edgy exterior. He still wants to play the villain, trying in vain to act threatening to Luz and friends while furthering the agenda of Emperor Belos. But deep down he’s a cringy sweetheart, one who has now begun chipping away at his inevitable redemption arc.

Who doesn’t love a good redemption arc? Watching characters like Zuko, Catra, Lilith, and so many others in the stories we love begin as villains before slowly coming to terms with their own destiny and changing sides is a slice of poetic brilliance that never gets old.

We love villains, but what we love even more is seeing their prejudices deconstructed as they embark on character arcs where the plight they’ve been complicit in is shown for what it really is – a wrong that can’t be repaired unless they're willing to upend their entire worldview. Catra was so burned by betrayal that she refused to see the love for Adora that was there all along, while Zuko was entirely obsessed with receiving his father’s approval that doing the right thing never entered his mind. He had a singular goal, and would burn down entire villages to see it through. These characters aren’t evil by nature, they were groomed by an environment that rewarded murder, corruption, and turning your back on those in need. It seemed like the easier path, or a clouded one, so they all took it. 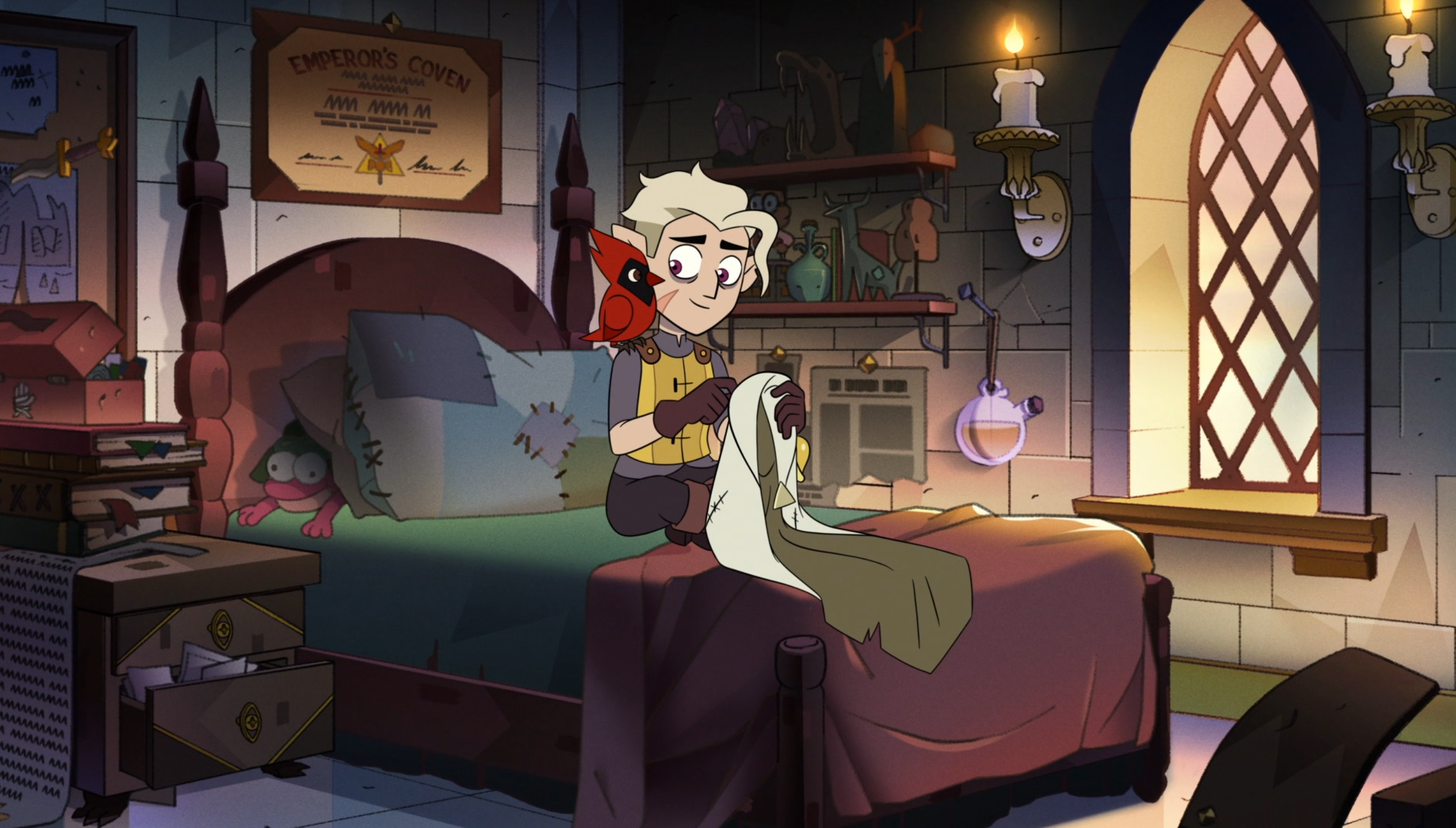 Hunter is similar, but younger and still caught up in a corrupt system that he is irreparably attached to. Walking away will take courage he doesn’t yet have. But he’s gaining that independence, a willingness to see the error of his ways and how the legacy he is trying so desperately to become a part of isn’t worth the sacrifices it will entail. Last week’s episode – Any Sport in a Storm – focused on Hunter trying to recruit Hexside students to the Emperor’s Coven, while failing to notice that he’s also just a teenager who really needs to make friends. He turns up to the school fair hoping to wrangle up some competent students without realising that he doesn’t know how to look, act, or feel around people his own age. It’s adorable, and of course the troubled edgelord turns into a bumbling mess the moment someone shows him an ounce of kindness. Our sad boy just wants to be loved.

All his life he has known only fascism and tyranny, believing a society that stamps down on unruly magic and seeks to rehabilitate those who exist outside bigoted norms by either imprisoning them or forcing them to adhere to ideals that themselves are woefully outdated. Hearing him talk about how workers under the Emperor’s Coven only have one day off a year and that being locked in a prison cell is par for the course is darkly comedic, even more so when Hunter elicits a chuckle at how absurd this entire system is once someone who isn’t brainwashed is willing to point such things out. 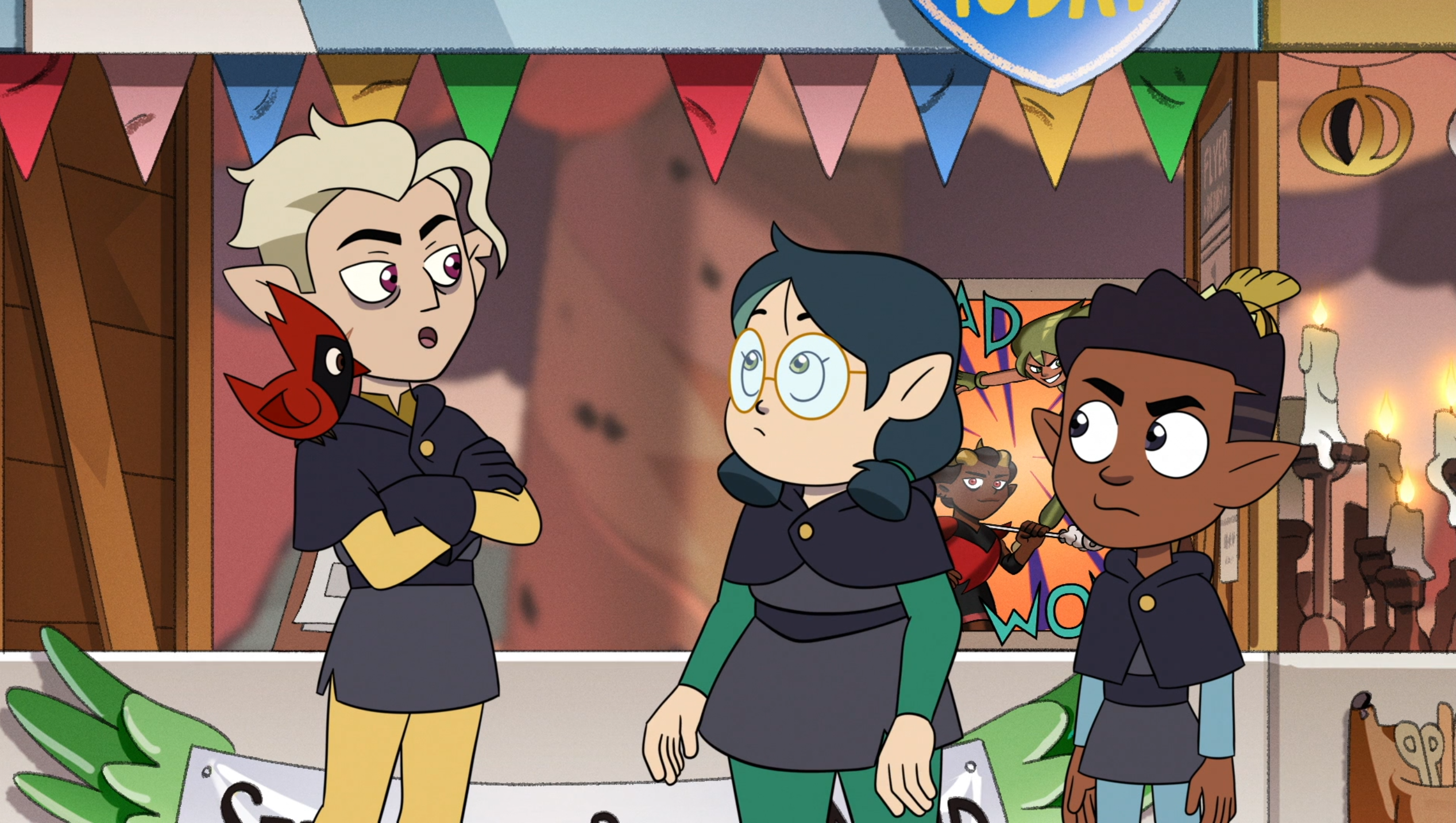 From the start it’s been clear that Hunter isn’t evil, he’s just an unfortunate byproduct of the society he exists within, and has never been given the ideological knowledge to break free of his own vices. So when Luz comes along and seems happy with her magical freedom, and not lonely due to her own existence, he can’t help but feel miserable with himself. The emergence of his Palisman – adorably nicknamed Flapjack – also teaches him that magic is a force of good and friendship, not one of evil and isolation. The best redemption arcs are told over time, where characters are forced to face the consequences of their past while being forgiven by those they wronged most. Healing takes time, and the best stories know that.

Hunter hasn’t reached this point quite yet, but you can see the seeds being planted. Any Sport in a Storm saw him drafted onto Willow’s derby team alongside a bunch of other unruly teenagers who might otherwise be treated as outcasts. Misery loves company, and it doesn’t take him long to learn the rules and establish a camaraderie with his newfound friends. Seeing him smile proudly in a selfie alongside his peers as the episode draws to a close feels so well deserved, even if Hunter’s intentions still feel clouded by moral duplicity as he takes his teammates prisoner and believes, deep down, that he’s doing the right thing. 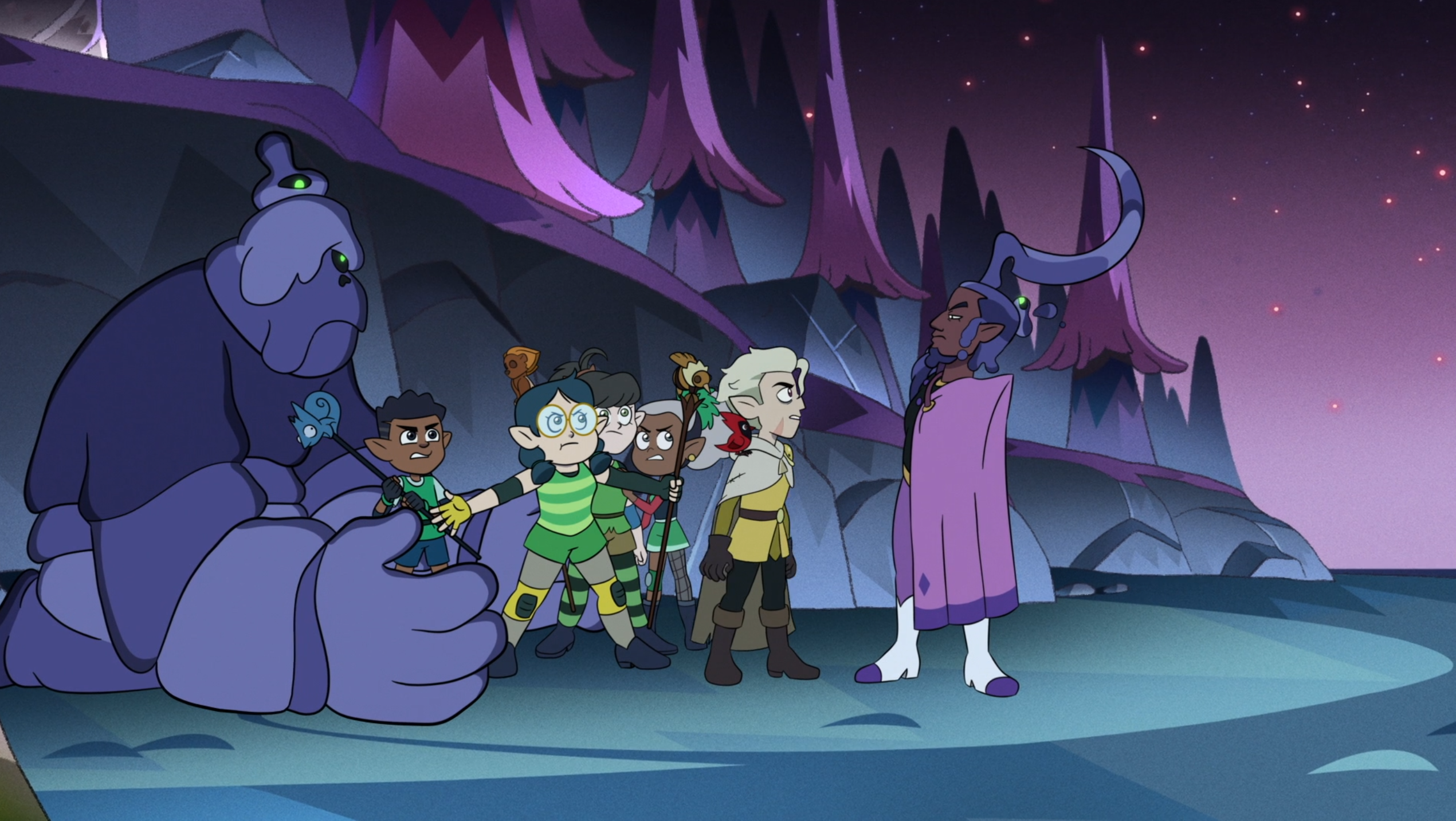 They aren’t happy, feeling betrayed and used by their presumed friend as they’re drafted off into a life of tyrannical oppression. The Owl House isn’t that macabre though, and Hunter soon realises the error of his ways and mounts a rescue mission. This is a monumental moment of growth for his character and an admission of guilt. He knows that he doesn’t deserve forgiveness for his actions, but he’s mature enough to know he was wrong and that making it right is so important. Unfortunately his attachment to the Emperor’s Coven is reinforced as he’s deemed worthy by his superiors at the episode’s end, clouding his moral standing further as he’s stuck between dedicating himself to a wrongful cause or leaving it behind altogether. He isn’t ready for the latter, and I think there remains a defining moment waiting to play out that will change his outlook forever.

I hope Willow is the catalyst in that change. I’ve had friends in the fandom obsessing over ‘Huntlow’ for months though, shipping the two characters together and hoping they’d have more time with one another in the coming season. We’ve gotten our wish, and now all we need to do is hope they can build upon this relationship in the weeks to come. Hunter has the potential to be the bearer of a tremendous redemption arc if it’s treated with enough care and attention, and I feel we’re well on our way to seeing it play out. Now please exchange cute texts with Willow the entire fandom can lose their minds over.