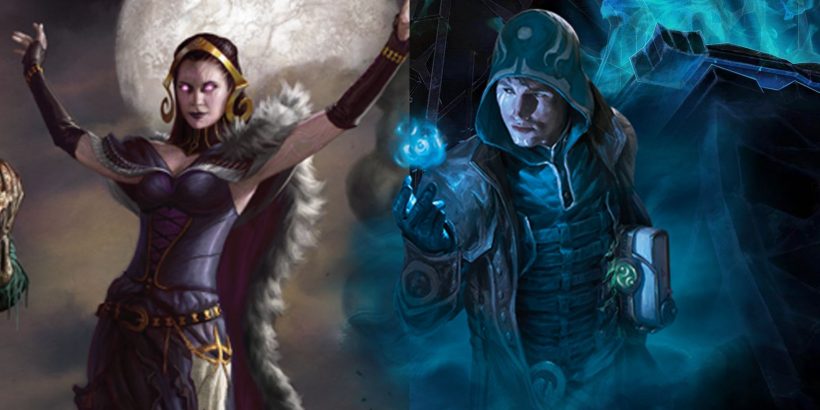 Magic: The Gathering has managed to continue to grow in popularity, despite the trading card game being around for nearly 30 years. There are 13 card types, though, in most formats, a player only has to concern themselves with seven. Each card has its own special ability that players use to defeat their opponents, creature cards for attacking, land cards for generating mana, etc.

Sorceries are spell cards that deliver short-term effects that affect either creatures or players directly. They can be played during the main phase, and only when the Stack is empty. And though Red and Blue generally favor them, sorceries can be found for all the colors. It's good to understand what the most powerful sorcery cards In Magic: The Gathering are.

Updated March 1, 2022, by Jerrad Wyche: Magic: The Gathering is one of the most decorated and classic trading card games in existence. With the launch of MTG: Arena, the card game has brought in a whole new audience of players learning how deck-building and mechanics work cohesively to build unbeatable creations. The latest set expansion for Magic: The Gathering is called Kamigawa: Neon Dynasty and released in February 2022. Each new set brings the potential for new cards that become some of the best of all-time and withstand the test of time. 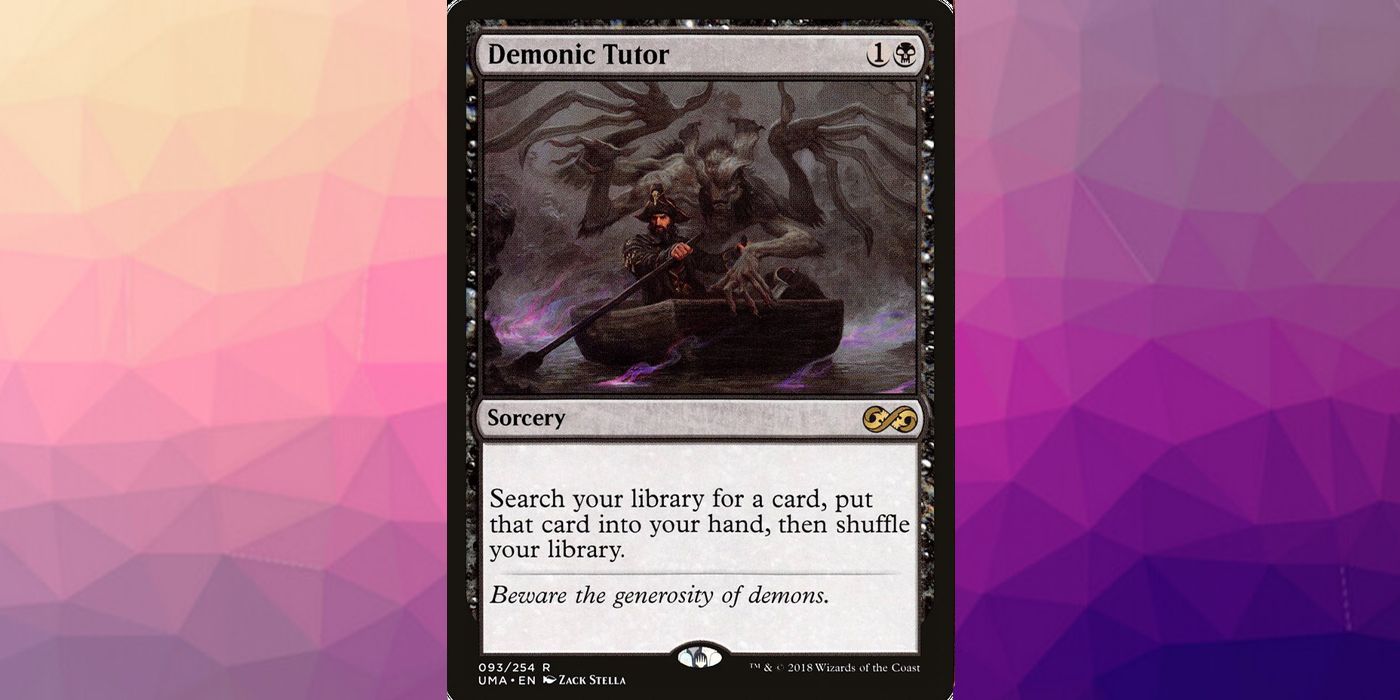 Demonic Tutor, since its release in Alpha, has felt like a cheat code in Magic: The Gathering. For just one colorless and one black mana you get to search your entire library for a single card and place said card in your hand.

It's one thing to have Demonic Tutor in your deck, but learning what cards you should search for depending on the situation is what takes the card from great to invaluable.

Digging, or searching for specific cards to solve immediate problems or matchups, is invaluable in the game of Magic: The Gathering, regardless of what format you're playing. Demonic Tutor is so overpowered that it's either banned or limited in most formats, except for Commander, a format in which it is considered a staple for any deck that includes black. 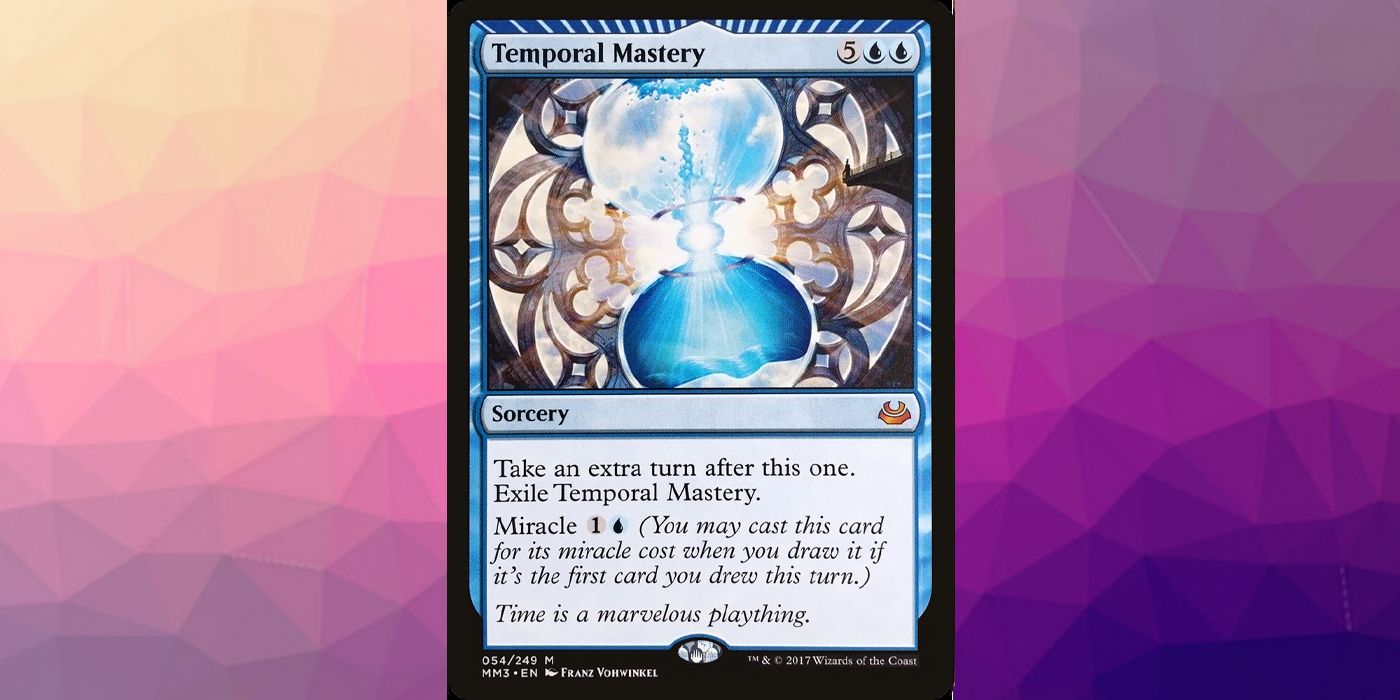 Temporal Mastery is a sorcery card that allows you to do the rare event in which you can take an additional turn following the turn in which it is cast. For seven total converted mana it seems reasonable, but what makes this card so powerful is its inclusion of the Miracle mechanic.

Compared to other extra-turn sorceries like Time-Warp and Alrund's Epiphany, Temporal Mastery's miracle cost can provide you with an early game advantage at a converted mana cost of just two mana.

Introduced in the Avacyn Restored expansion for Magic: The Gathering, Miracle allows you to cast a card for a reduced converted mana cost if it's the first card you draw during your turn. Taking two turns in a row can dictate an entire match and makes Temporal Mastery one of those few cards that provides a desperate player with a Hail Mary opportunity. 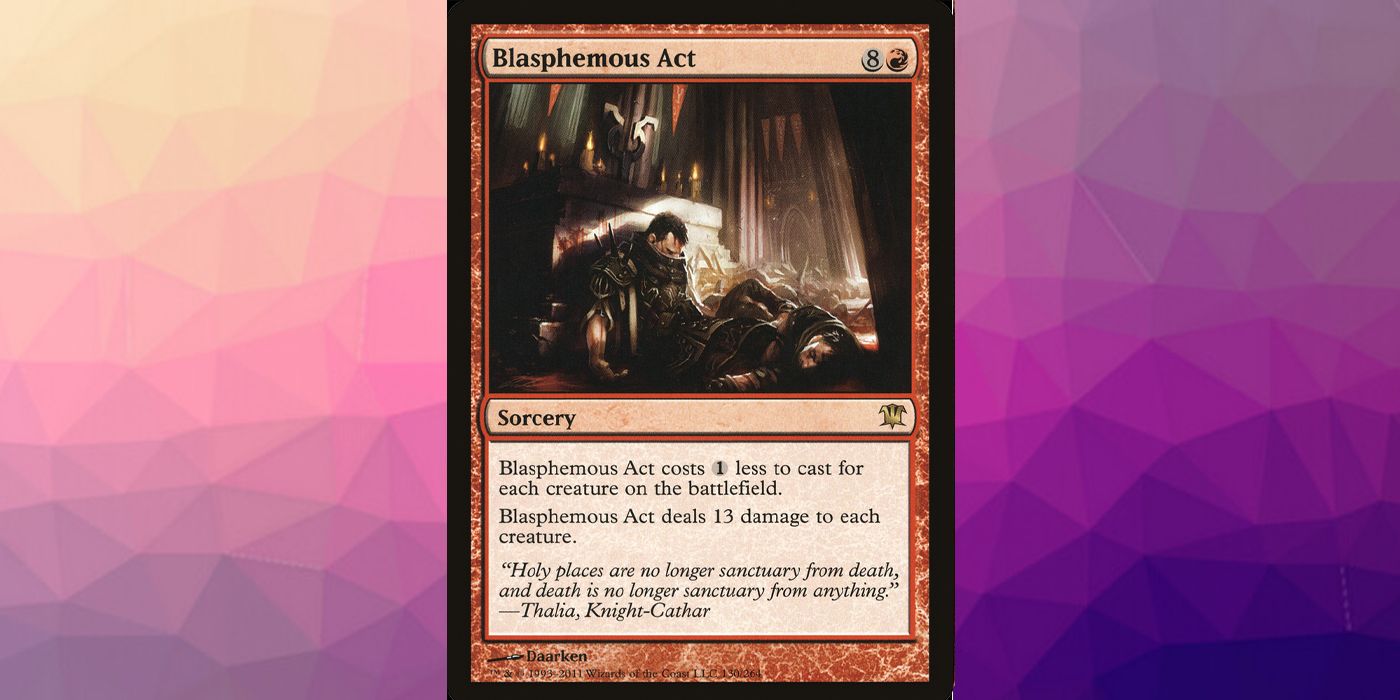 On the surface Blasphemous Act looks like a sorcery card that should be used as a last resort when the board feels overwhelming filled with creatures. In a game of Commander, this is a far too common occurrence.

In addition to its use as an effective board wipe, the combo cards it pairs with make it invaluable. A popular choice in that regard is a red creature card called Brash Taunter, an indestructible Goblin that when dealt damage, does that much damage to target opponent. It's clear to envision the various other cards that can work in tandem with Blasphemous Act to cause chaos in almost every match of Commander. 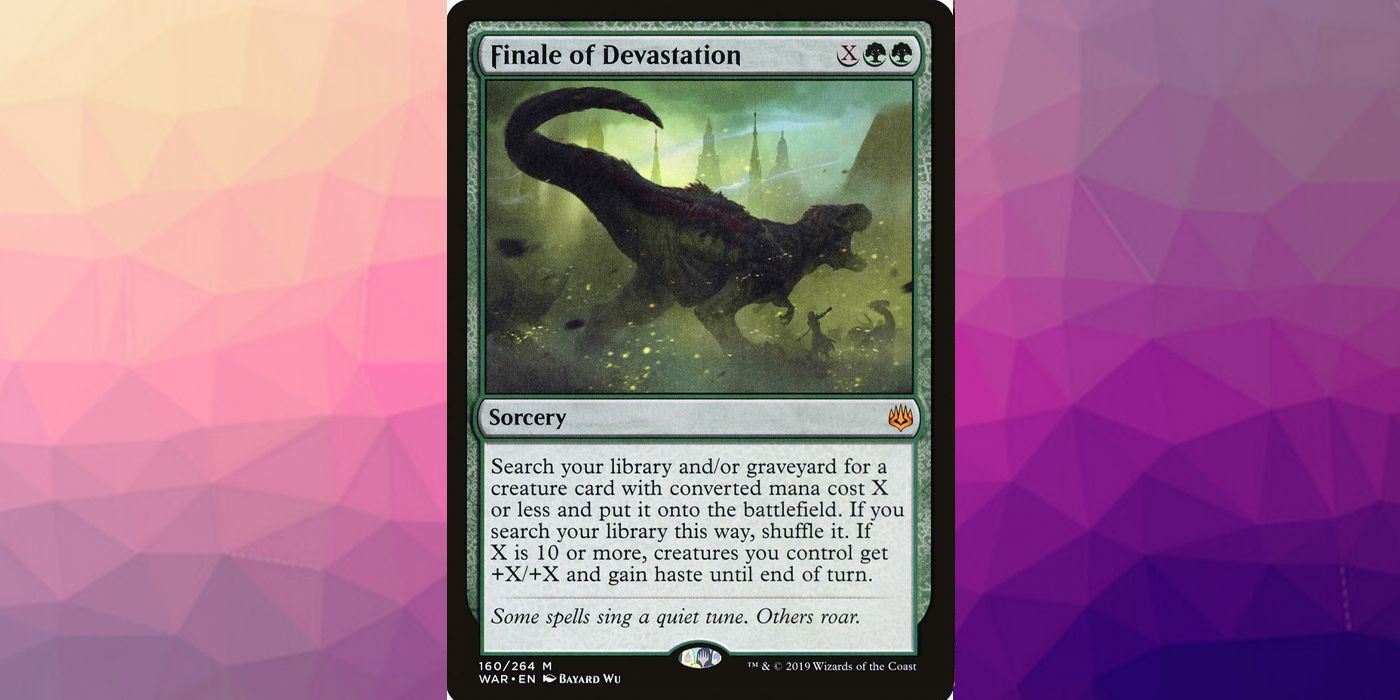 Sorcery cards often lack the immediate and decisive effect on a game of Magic: The Gathering that an instant or creature card with flash does. What they can do, however, is provide late-game board-changing bombs you'd never see coming.

Finale of Devastation is a green card cost that provides versatility to you as the caster. In the late game stages of a match in Commander or another game format, it allows you to summon a creature of your choosing, provided you know the cost of said card. The artwork by Bayard Wu brings to life the literal devastation this card can bring to the battlefield when your opponents least expect it. 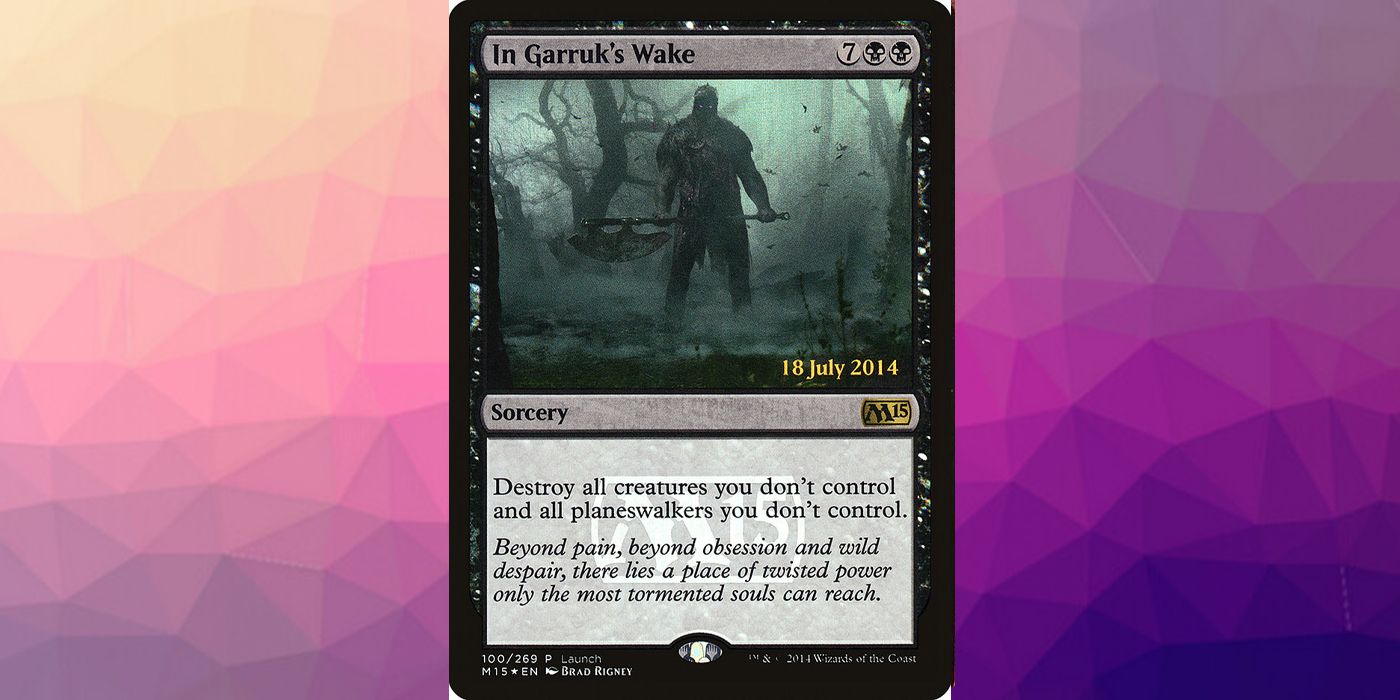 In Garruk's Wake is a black sorcery card that allows a player to destroy all creatures and planeswalkers that aren't in their control. It's a pretty handy card to clear the field and do some serious damage to an opponent in one go.

It's super effective in multiplayer matches as well and while it won't take out indestructible creatures – you need cards with effects that take them out of play – its ability to take out planeswalkers makes the nine mana cost worth it and makes it a great card to have in any black deck. 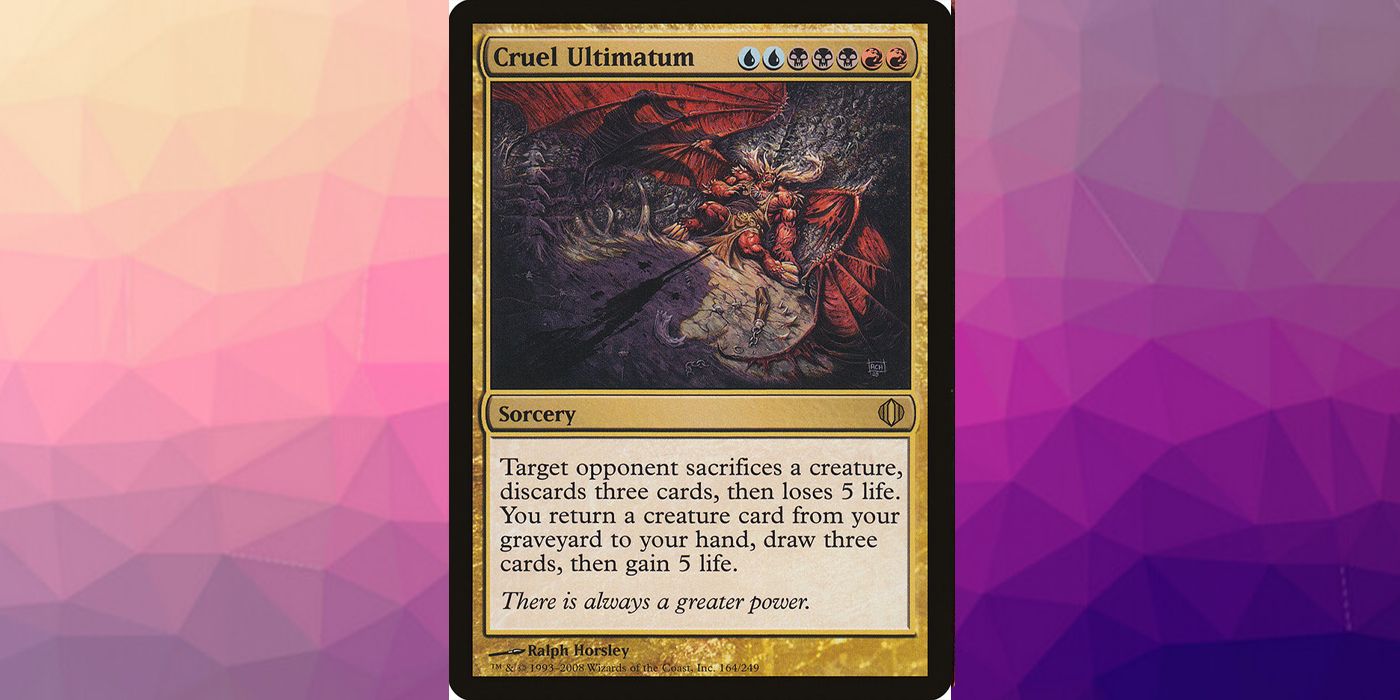 What's even better than knocking down your opponent a peg? Knocking them down three. Cruel Ultimatum allows a player to hit their opponents in three different ways. When it is played the targeted opponent has to sacrifice a creature, discard three cards and lose five lives, all in one go.

What makes it even worse for them, but better for the player, is that they can get a creature from their graveyard, draw three cards and gain five life. It's a win-win, or lose-lose situation, depending on a player's perspective. 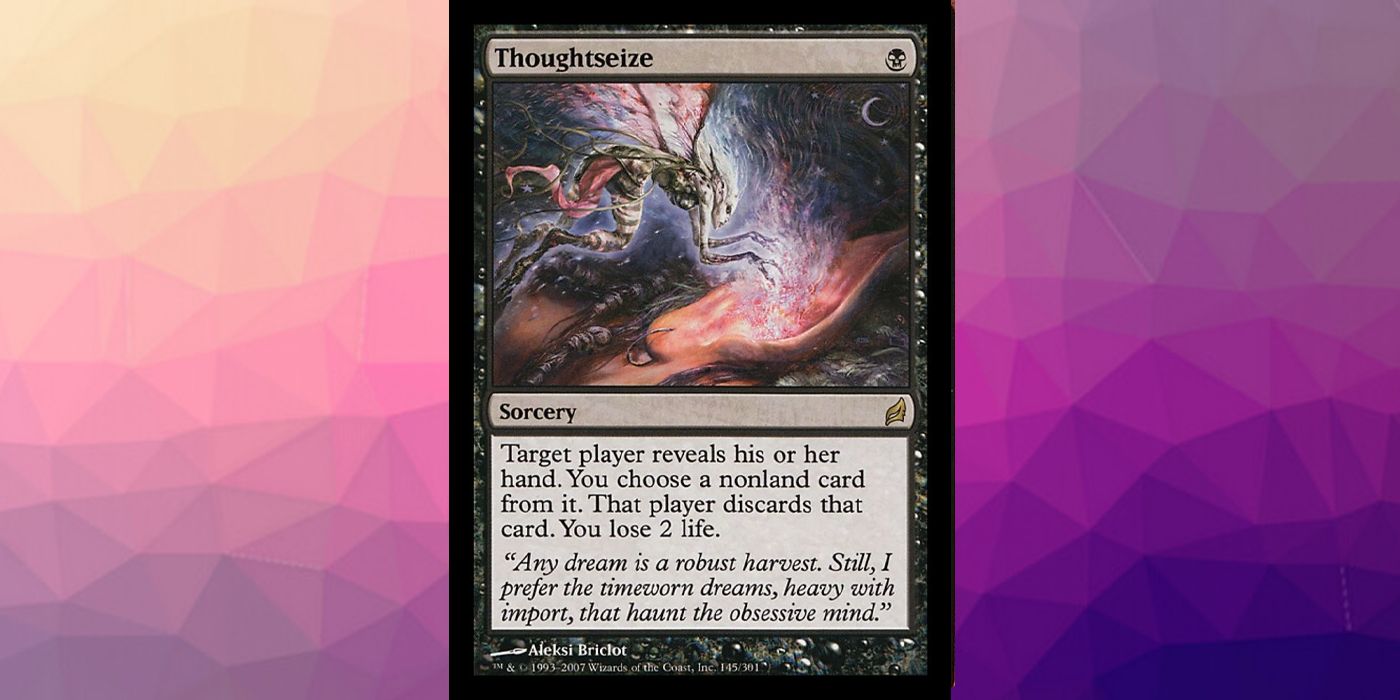 It's difficult to develop a strategy when you don't know what your opponent has at their disposal. Some sorcery cards can you give a heads-up on what's coming, like Thoughtseize. This sorcery card allows a player to target another and has them show their hand.

Next, the one who summoned the card can choose a non-land card from their opponent's hand and make them discard it. Whoever plays it has to give up two life points but it is a good way to get into an opponent's head, and possibly derail their plans before they start.

7 Curse Of The Cabal 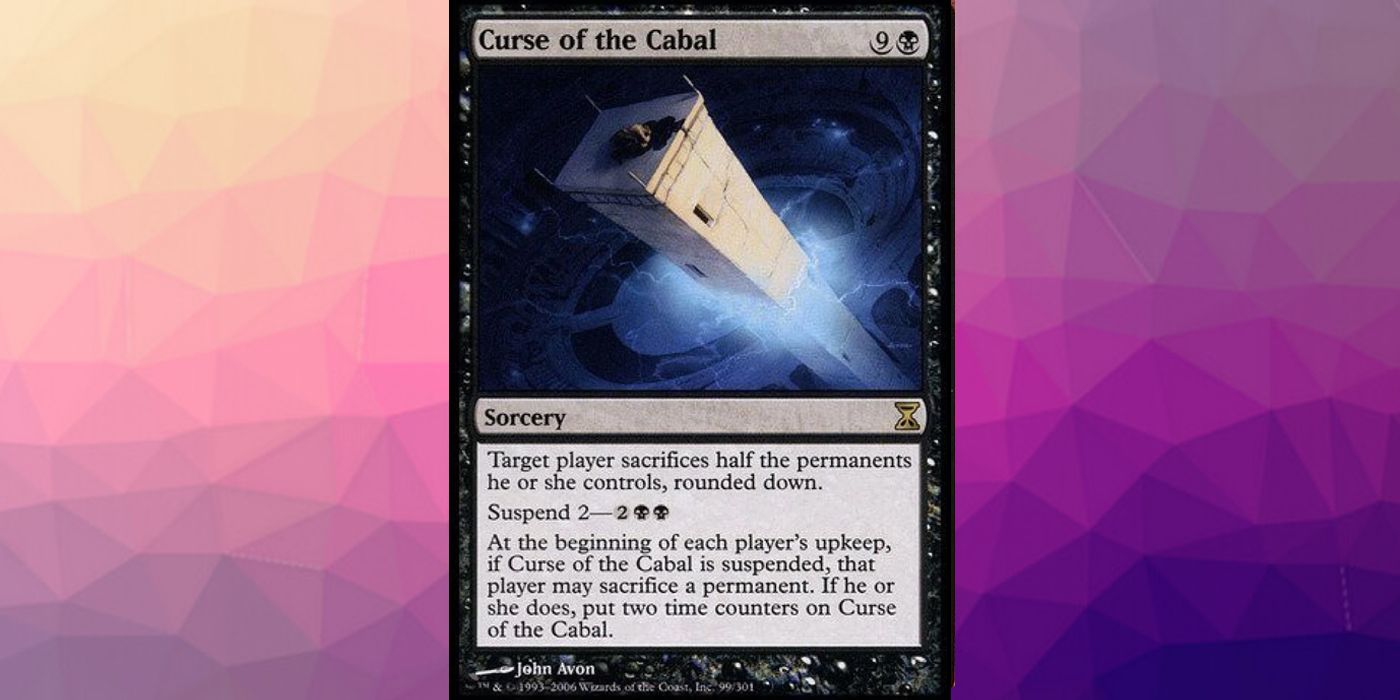 Curse of the Cabal offers two options for players to choose from, it all depends on just how much quicker they want their opponent to suffer, or how much mana is at their disposal.

Curse of the Cabal forces an opponent to sacrifice half of the permanents that they control. Though they get to pick, it certainly won't be an easy choice. Curse of the Cabal also gives a player the option to suspend the effect, meaning it happens later on gradually if they can't afford the ten mana cost off the bat. 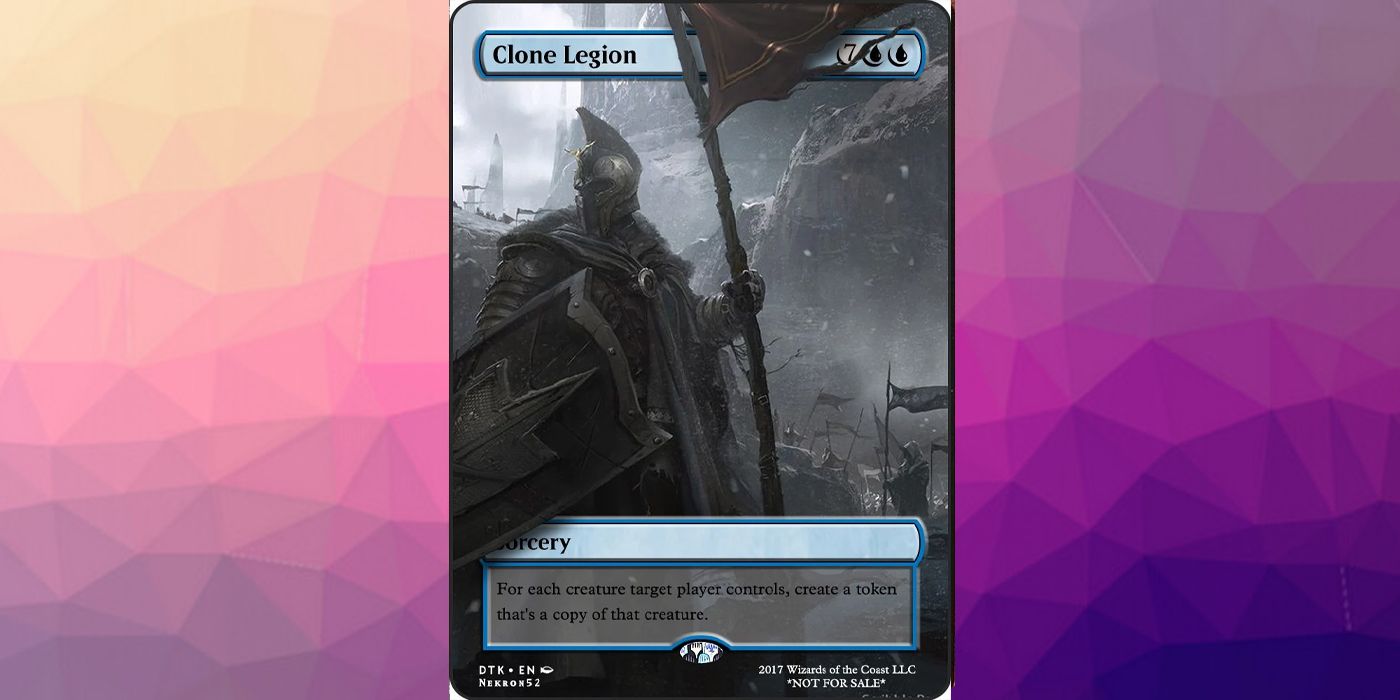 Need a way to beef up your defenses, offenses or even just flex on an opponent? Then the Clone Legion card might be the best sorcery for you. This one allows a player a token for every creature that is controlled by their opponent or by themselves.

In one turn a player can create their own army of creatures to use at their disposal. Of course, they have to keep in mind the limit on legendary cards and that most creatures can't attack or tap until their next turn, but it's still a pretty powerful card. 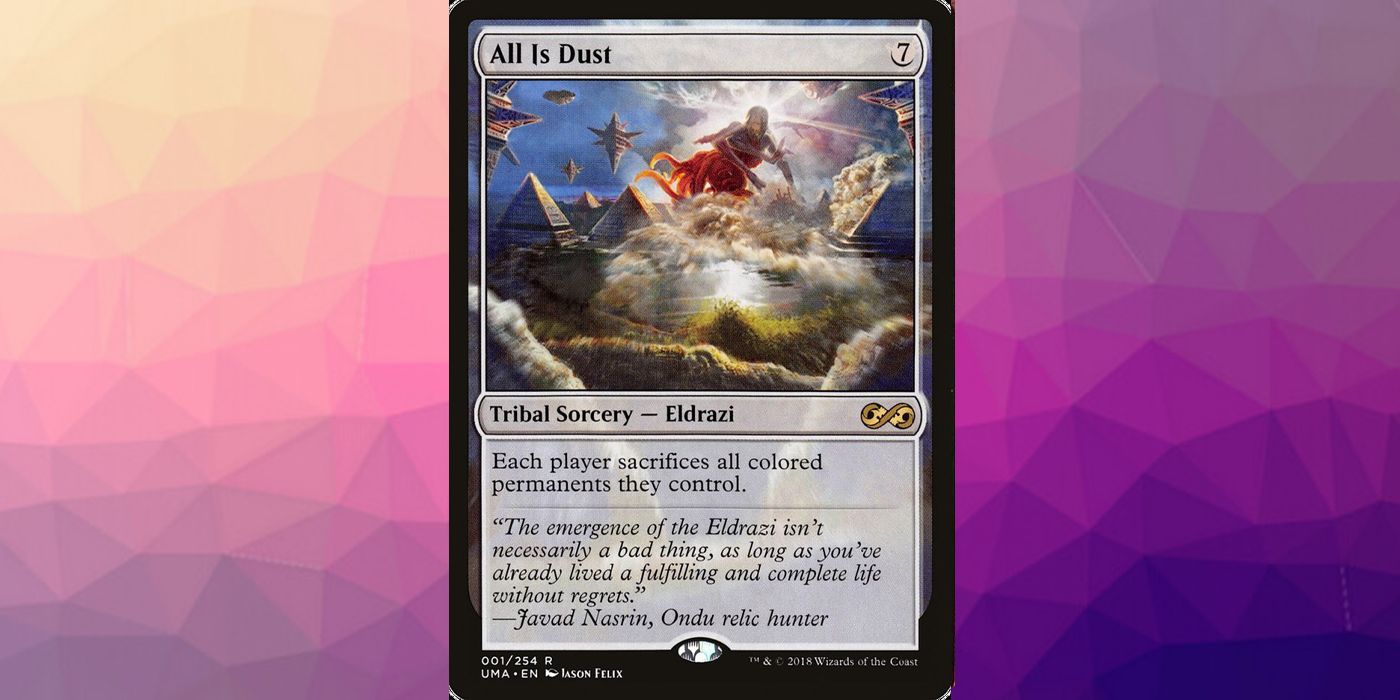 Rise of the Eldrazi brought the terrifying but powerful creatures to the game and a number of other cards related to them. All is Dust is one of them.

A tribal sorcery that works amazingly well for players with colorless decks, when All is Dust is played every player must sacrifice every permanent that they control. That also includes the player who wields the card, since a colorless deck would include creatures like the Eldrazi and artifact creatures they won't have to worry about this sorcery's devastating effect. 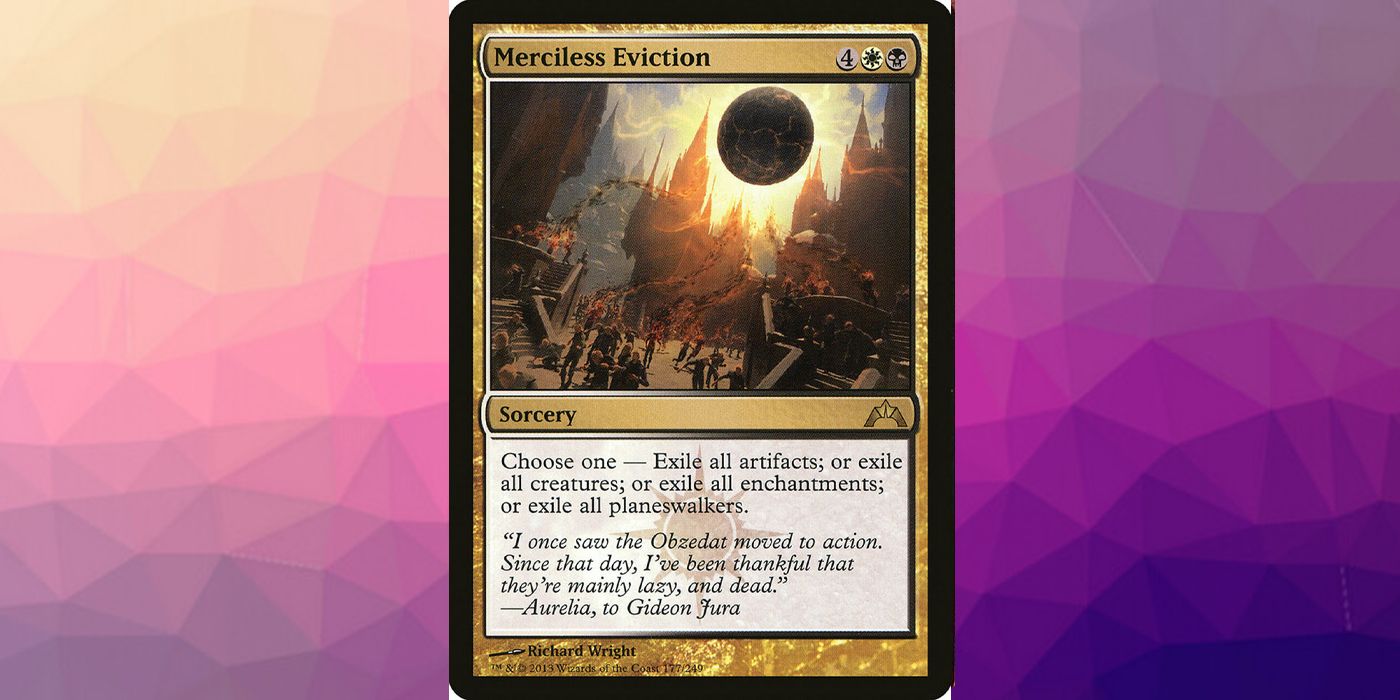 Most people like having multiple options right? It would get old to have to eat the same thing every day or even play the same game over again. Merciless Eviction is a sorcery card that gives a player multiple options on how they want to utterly devastate their opponent.

A player can choose to either exile: all planeswalkers, all creatures, or all artifacts. And once a card is exiled, there are few instances in which it can be brought back. It's especially good for getting rid of creatures who are indestructible. 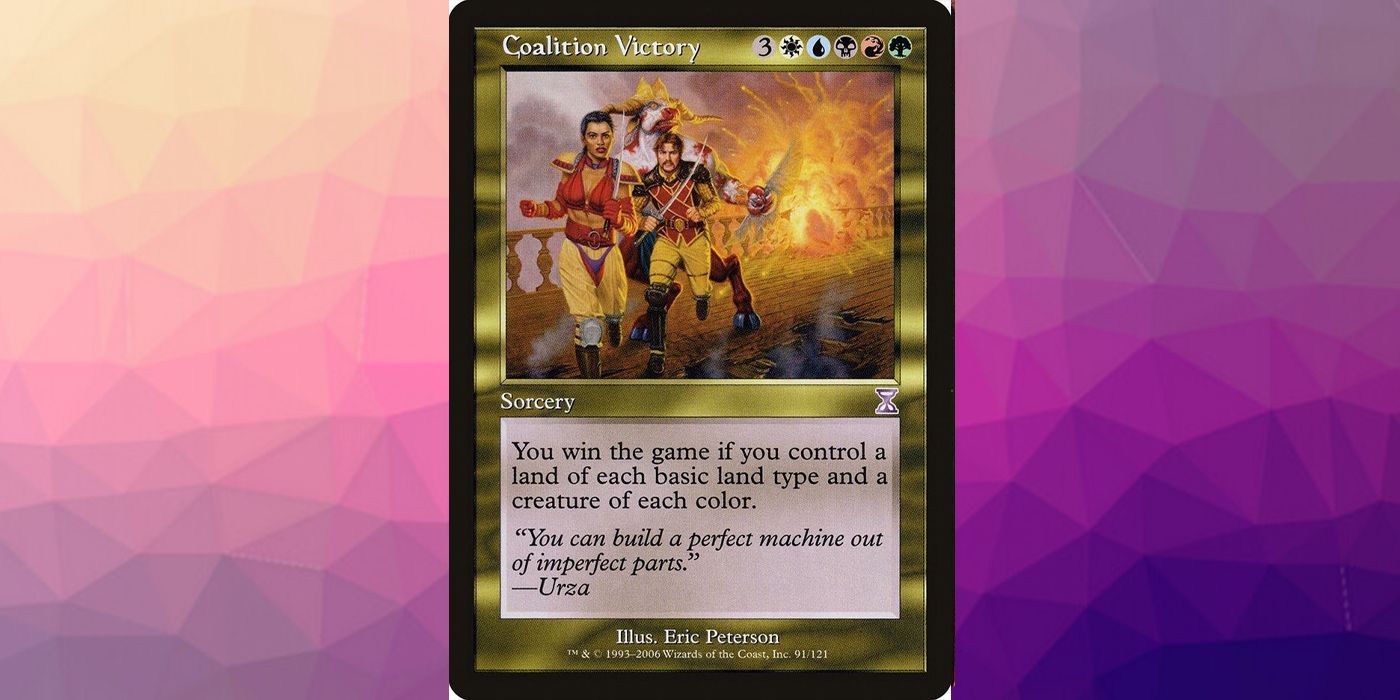 In Magic: The Gathering, there are a number of ways a player can win the game. They can deplete all of their opponent's life points, they can decimate their deck, leaving them no cards to play, they can even deal them enough poison damage to win the game.

Before you rush to buy this sorcery card, know that Coalition Victory is officially banned in the Commander format.

Coalition Victory is a sorcery card that grants a player victory automatically if they control creatures and lands for each of the colors. It costs eight mana and is banned in certain formats but it's an amazing card to have for players with multi-colored decks. 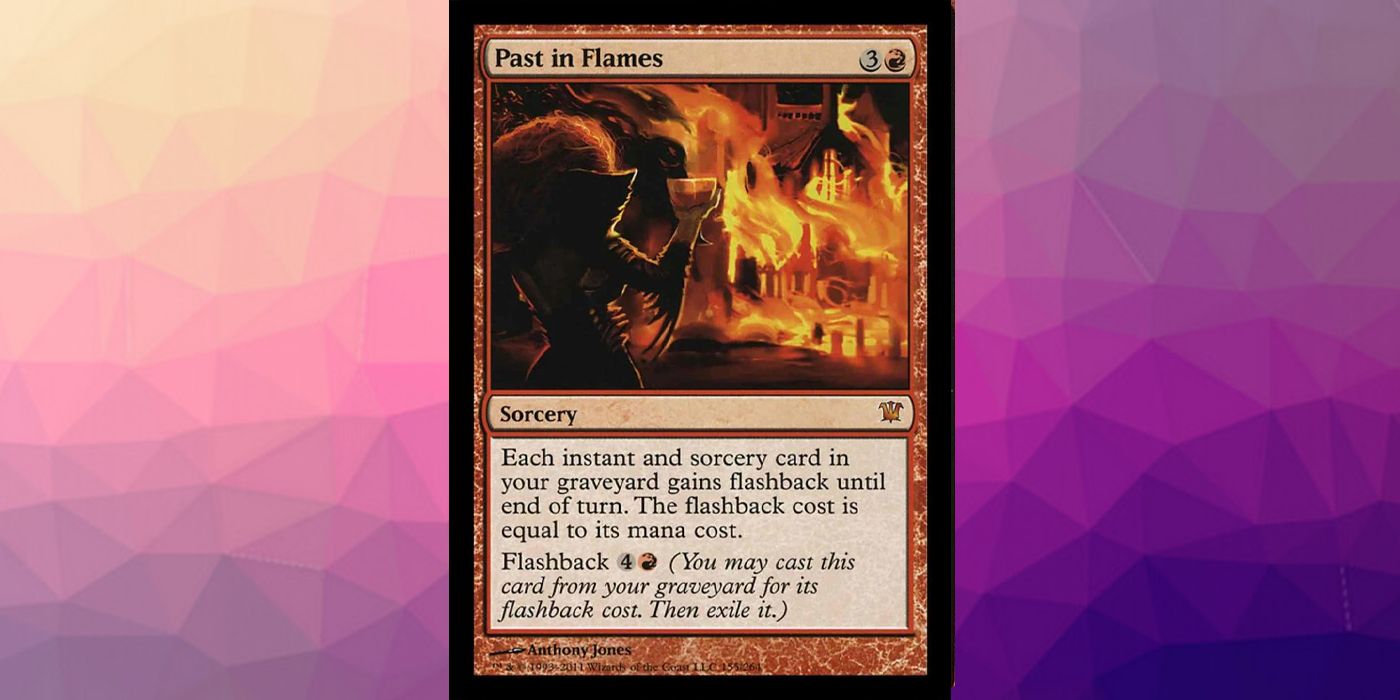 After playing or losing an instant or sorcery card, wouldn't it be great if you could just… get a second chance with it? Well, Past in Flames will give a player that second chance.

With it, every instant and sorcery card in their graveyard gains the Flashback ability until the end of the turn. Flashback means that the card can be played directly from the graveyard. The flashback cost is equal to the mana cost, but it's worth it to be able to use any instant or sorcery card again. 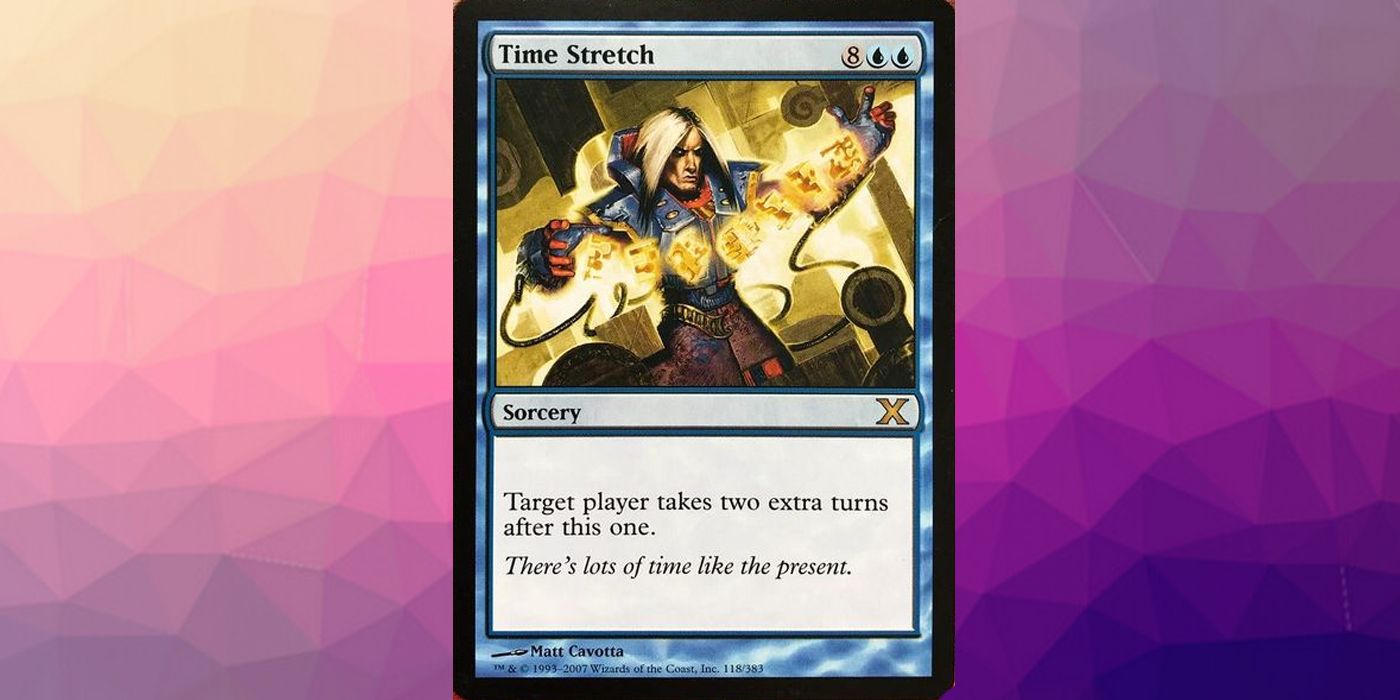 Ever wanted more time to set up an amazing strategy that would totally wreck your opponent? Now you can, sort of. Time Stretch costs ten mana to play but the price is well worth the ability it offers.

With Time Stretch the targeted player is allowed to take two extra turns right after they play Time Stretch. That's two whole turns for a player to gain more cards, play more cards, attack their opponents, raise their defenses, and more. And all their opponent can do is sit there and watch.