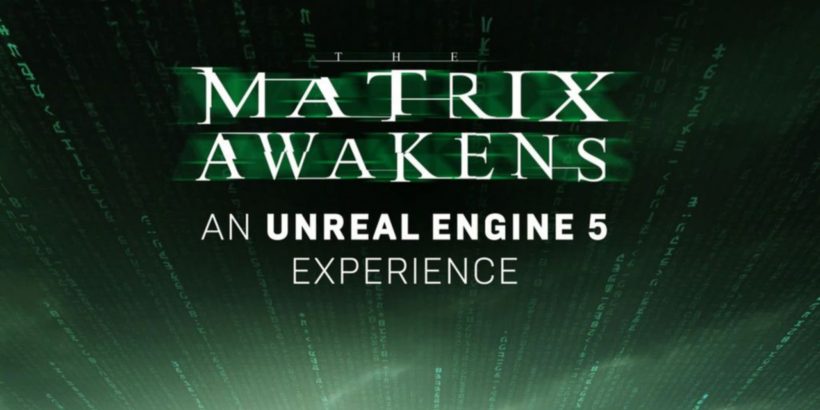 A poster for The Matrix Awakens has appeared on PSN, seemingly teasing some kind of "Unreal Engine 5 experience" for PS5. With The Matrix Resurrections premiering in less than three weeks and The Game Awards around the corner, it's looking like we'll learn more about the mysterious project pretty soon.

The leak made its way onto Reddit recently, with the poster showing a modern city overlaid by a recognizable Matrix-green hue, with lines of digital code all around. The only two things it reveals are the "Awakens" subtitle and the mention of Unreal Engine 5. According to the source, the data was discovered on the PlayStation Network's backend and is exclusive to PS5. There is not much else known about the project currently.

Considering The Matrix: Resurrections release this month, it's possible that Matrix Awakens isn't a new game set in the iconic universe, but that it could be some kind of tie-in interactive collaboration to promote the movie. It also seems likely that this Matrix Awakens project, whatever it really is, might premiere during The Game Awards on December 9.

The Matrix Awakens wouldn't be the first time that the series has stepped into gaming. Several games based on the series have been made, including Enter The Matrix in 2003, Path of Neo in 2005, and The Matrix Online.

The series' fourth chapter, The Matrix Resurrections, is coming to cinemas and HBO Max on December 22. Keanu Reeves and Carrie-Anne Moss reprise their roles as Neo and Trinity, while Yahya Abdul-Mateen II will portray a new version of Morpheus.