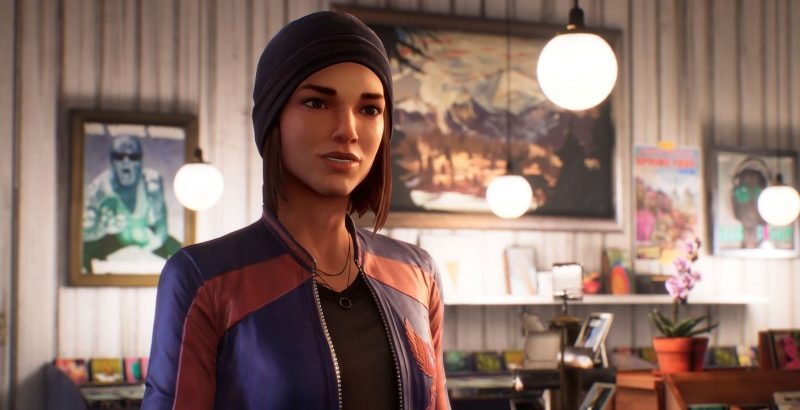 I can’t help but be drawn to Steph Gingrich. Like many fans, I loved her when she first appeared in Life is Strange: Before the Storm as a passionate dungeon master and gifted artist. Chloe Price might have said it best in her journal when she wrote that she couldn’t tell if Steph was the coolest or nerdiest person in Blackwell. That’s part of Steph’s charm and appeal; she completely indulges in her interests without caring what other people think.

When Deck Nine brought Steph back for True Colors, she reached a new level of awesome, still completely throwing herself into roleplaying, but also pursuing her passion for music by working in the record shop and DJing for Haven Springs’ local radio station. The new Wavelengths DLC serves as a True Colors prequel to bridge the gap between Steph moving to Haven Springs after the events of the original Life is Strange and Alex Chen’s arrival in the small Colorado town. Deck Nine once again excels with witty and relatable writing, while finding intriguing ways to involve the players in Steph’s story that do justice to her personality and interests.

Wavelengths has you living out days in Steph’s life over the course of four seasons, seeing her settle into her new life and grow as a person as she confronts her past and future. The DLC takes place a year before Alex shows up in Haven Springs and puts you right in the DJ booth as Steph begins her job as a host for the local radio station. You perform the basic functions of the gig, such as picking the music, reading advertisements, and answering phone calls for song requests and advice. You also have some downtime to get Steph’s dating profile activated and swipe for matches to resurrect her love life.

Having to perform Steph’s job day-in and day-out has its advantages and disadvantages. Running a DJ booth is exciting at first; I was constantly queuing different records to spin, and I enjoyed that dialogue options let me add flavor to how Steph read the on-air ads, but the tedium of the job soon sets in. I stopped queuing up a unique playlist, and the gig started to feel like I was just going through the motions of completing an annoying checklist of tasks from my employer. Part of this is no doubt the point. It showcases Steph getting into a comfortable rhythm with the job, going from a fumbling rookie to a calm and collected pro, and it makes sense for the future decisions she makes. However, the lack of variety in her day-to-day life didn’t keep me engaged, and I longed for a few more surprises along the way.

That being said, controlling Steph’s dating profile was a nice reprieve from some of her DJ tasks, and I thought it was a clever way to implement player choice into the experience. Sometimes reading text convos can feel like a slog, but Deck Nine makes these interactions engaging and memorable, thanks to some humor and all-too-real dating app fiascos. For instance, at one point, I realized I was talking to a bot. A few other times, I didn’t hit it off with someone and discovered I had been ghosted. These exchanges represent the awkwardness of dating apps, while also showcasing the unexpected connections people can make through them. I won’t spoil where some of my relationships went, but I found it refreshing how the writers explored common dating issues like miscommunication, while also representing more personal struggles such as identity and mental health.

Those looking for more callbacks and connections to previous Life is Strange entries will find a great deal more here than they did in True Colors. I do recommend being familiar with Before the Storm and the original Life is Strange before playing this DLC. Steph has a connection to Arcadia Bay with Chloe and Rachel Amber, which isn’t ignored in Wavelengths. A great deal of the experience touches on Steph coming to terms with what happened in her hometown, and it’s done in a way that feels very true to a young person facing their first big tragedy and realizing the fragility of life.

What’s most admirable about Wavelengths is how it stays true to the character of Steph and finds cool ways to represent hobbies, personality, and identity into the experience. For instance, you decide how to craft a song she’s writing, from the instruments to the tone of the break. The story also discusses her life as a queer woman, such as having her reflect on her memories of Pride through the years and how she feels isolated in a small town that lacks a diverse community. I enjoyed hearing her perspective and learning how she’s grown to become the more confident person she is in True Colors.

Wavelengths does a lot well to make an already great character even more intriguing. It touches on Steph’s past and where she’s headed, giving me a new appreciation for the role she plays in Alex’s journey. I felt it was a great encore to True Colors, capturing a similar cleverness and depth. This DLC is worth the return trip to Haven Springs, especially to see things from Steph’s perspective. There’s a reason so many people have latched onto her as a character, and Wavelengths only further proves why she’s so captivating.