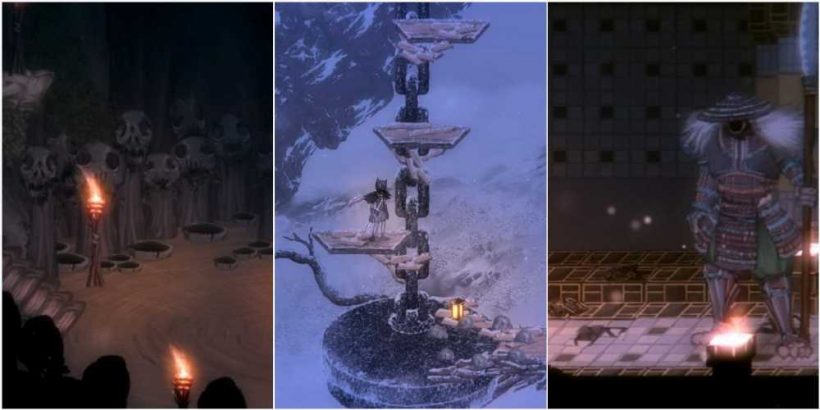 The world of Salt and Sacrifice is chock full of cool: weapons of every conceivable design, incredible boss battles, and a beautiful hand-drawn aesthetic that separates it from the other Dark Souls-inspired titles.

Aesthetically, though, one of the areas where Salt and Sacrifice truly shines is in its environmental design. From cramped, moss-infested caves, to abandoned monuments to dead gods, the game has you exploring one mysterious area after another, each hinting at the land’s dark backstory. And while Ska Studios designed every environment with an artist’s touch, there are some areas with tiny details that make them go from good to just plain awesome. 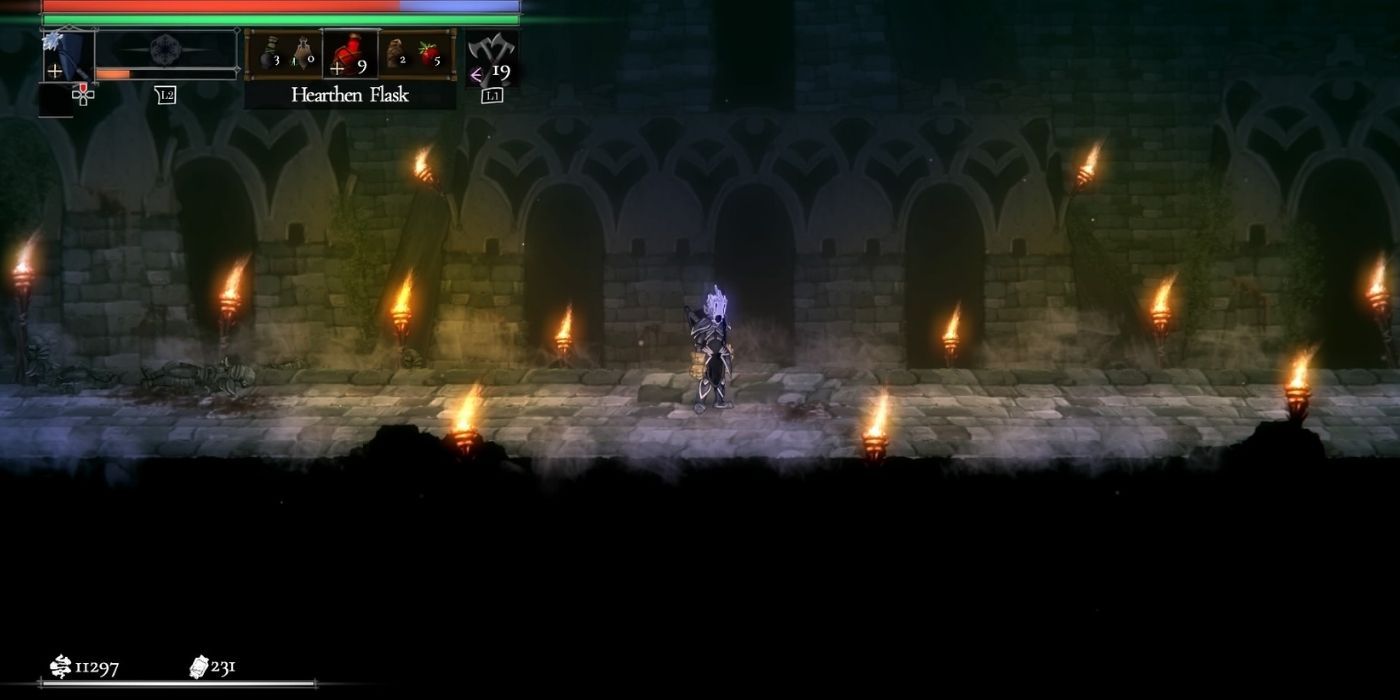 The moment you walk into Ashpeak castle on the far-left side of Ashborne Village, you know you’re in for a rough time. Replete with some of the most difficult minions in the game, the castle is filled with a host of unnamed mages, who are harder challenges than the named ones.

Part of the reason you’ll feel so threatened, though, is the castle’s architecture, which exudes menace. Just look at this room. The torches and offset pillars make it look like it’s the castle that’s your enemy, not the things inside of it. 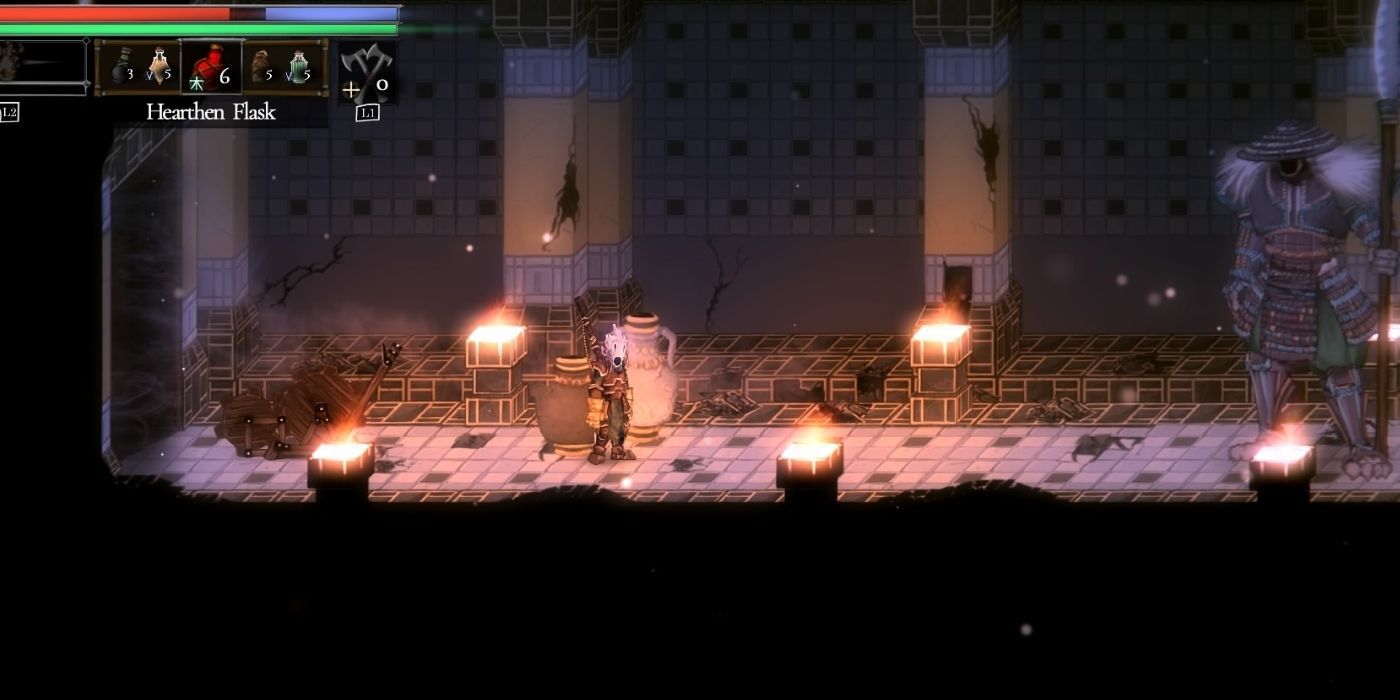 The Blasphemer’s vault, at the bottom of Dreadstone Peak, has some very, very nice tiling work. The green and gold glow that seems to seep out of the walls gives you the impression that at some point it held an ancient technology, or was the product of a long-dead race.

Unfortunately, you won’t have time to sit around and admire their work. The entire area is littered with gigantic undead samurai, each with more health than some of the early bosses. Then again, these house tours always seem to end badly, no matter what you do. 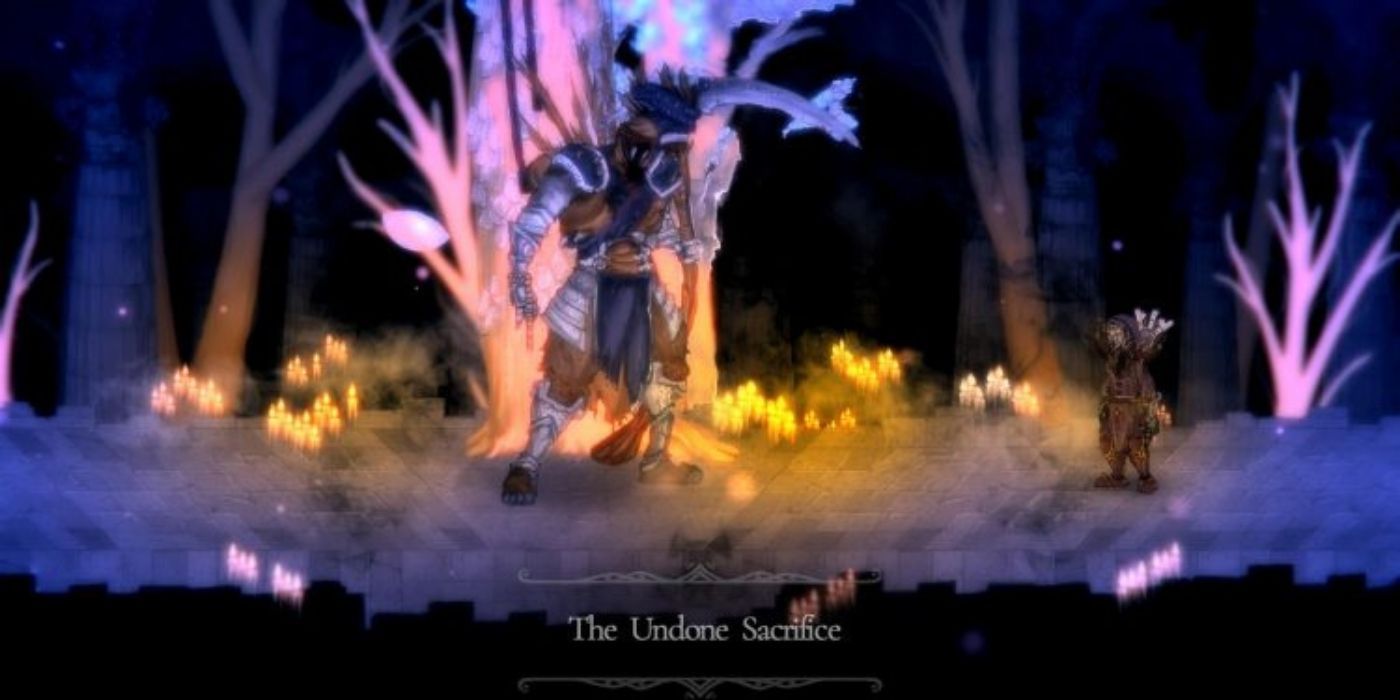 Unless you plan on going to the secret Hallowed Hill area, the Undone Sacrifice’s arena is the last you’ll face before the end of the story, and it is a stunner. The trees around him course with red and blue power, which serves for great ambient lighting for a final showdown, crackling with energy as the two of you exchange blows.

It’s good that the arena looks nice, too, because you’ll be coming back here a lot. As the final boss of a punishingly difficult Soulslike, you’ll find yourself facing off against him more times than Hideo Kojima can mention nanomachines in any one Metal Gear game.

6 The Hanging Cages Of The Desolate Planes 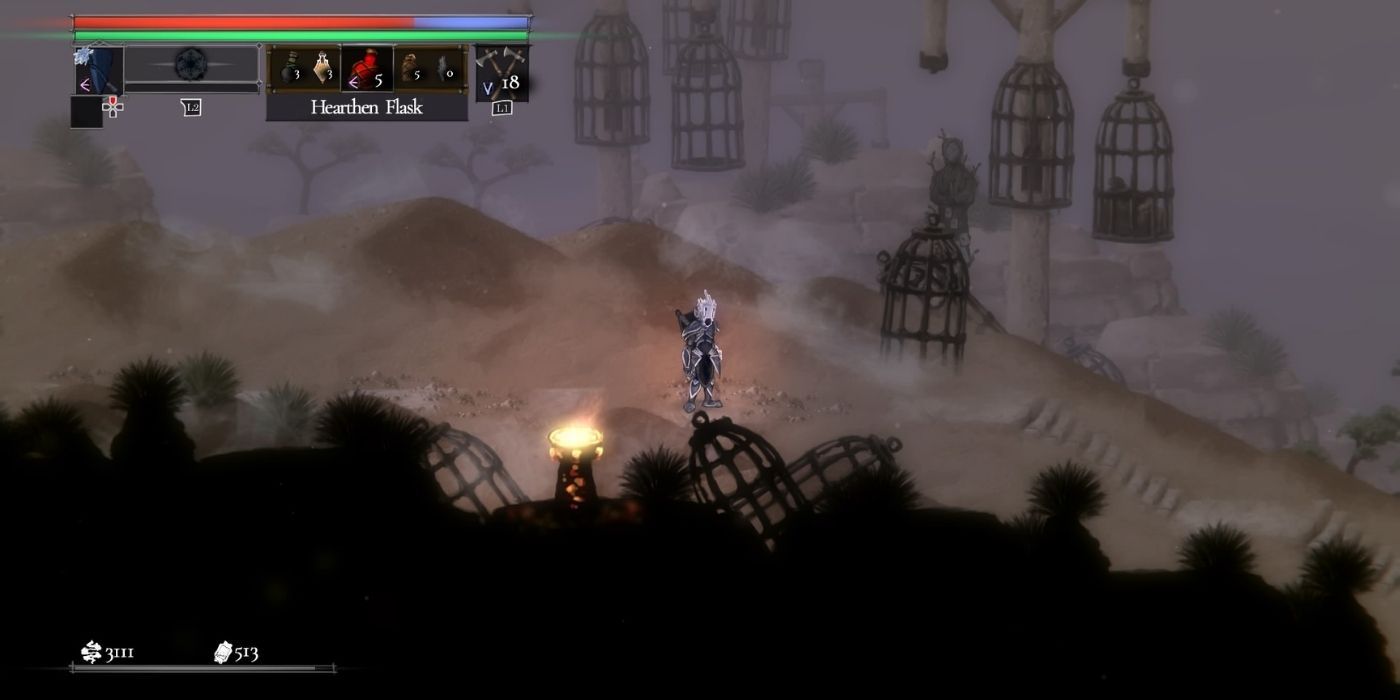 Oh, come on, the desert can’t be that bad. You’ve fought twenty-foot-tall mages that throw fire at you for the crime of blinking before coming to Bol Gerahn, what could scare you about a couple of hills full of sand? Except. Maybe these human-sized cages. Dozens of them. Lying around on that hill.

As with most aspects of lore, Salt and Sacrifice doesn’t tell you why there this one area in Bol Gerahn is replete with rusting cages, but you can’t deny it sets the scene. One of the coolest things Salt and Sacrifice does is hint at past events without actually telling you about them, and this small area exemplifies this trend. 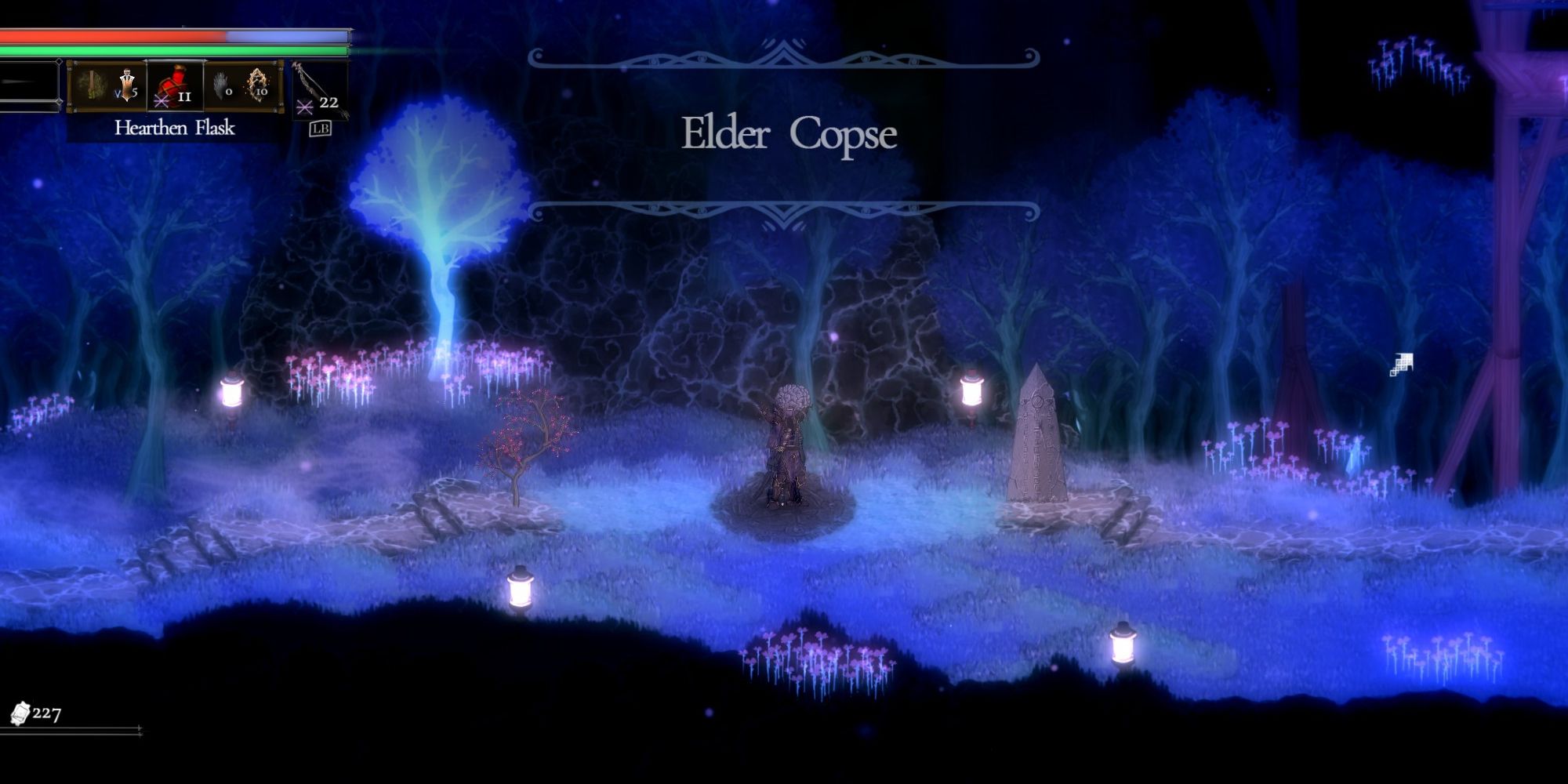 For the final area of the game’s main quest, the area where you start out in Elder Copse is just kind of nice. Sure, it’s dark out, but you’re used to fighting your way through literal poison swamps, so the glowing trees and verdant grasses are a nice touch. If the sun was out, it looks like you might even hear birdsong.

Don’t let the Fern Gully vibes fool you. The first thing you’ll find after that bunch of mushrooms are Skittering Maws which, if the name isn’t suggestive enough, seem to be two hands grafted together with a mouth shoved on one of the palms. And those are the least scary guys.

4 The Three Pillars of Bol Gerahn 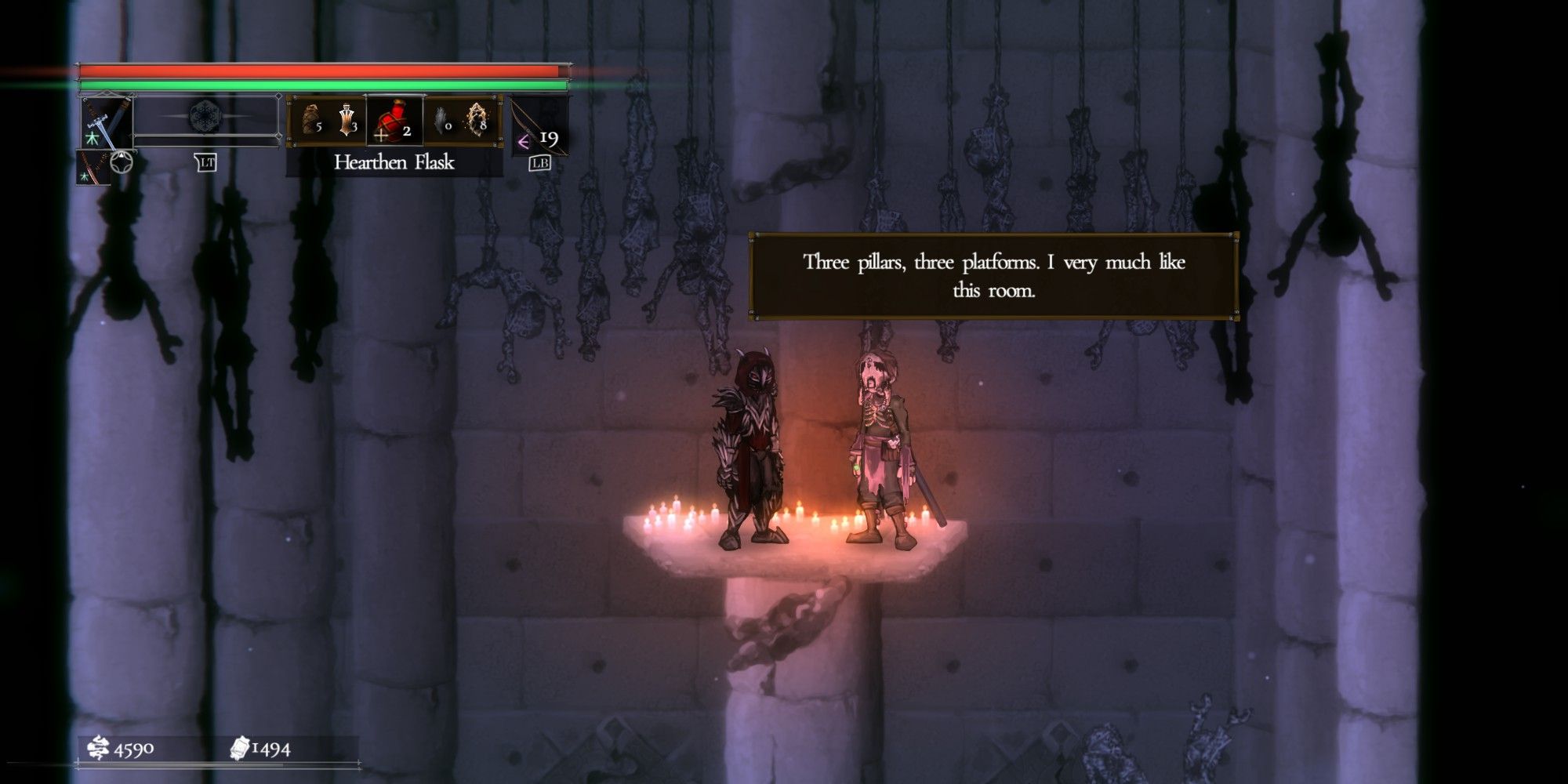 Your new friend Blighttaker Zix will tell you about how important the number three is to his Shroud Alliance sect, but it’s kinda difficult to pay attention with all of those corpses hanging around. More than being awe-inspiring and creeping your pants off, though, the room of the Three Pillars in the upper part of Bol Gerahn’s Temple illustrates the principle of the Shroud alliance perfectly: for each mage killed, a member of the alliance must kill three other players in PvP as a way to bring balance to the world.

You might complain to Zix that the illustration is a bit extra when he could have just told you what was going on, but he’s fairly smart in appealing to visual learners like that. Plus, if you do, you might find yourself hanging by your feet when the next inquisitor comes by.

3 The Top Of The Tree In Foulmurk Marsh 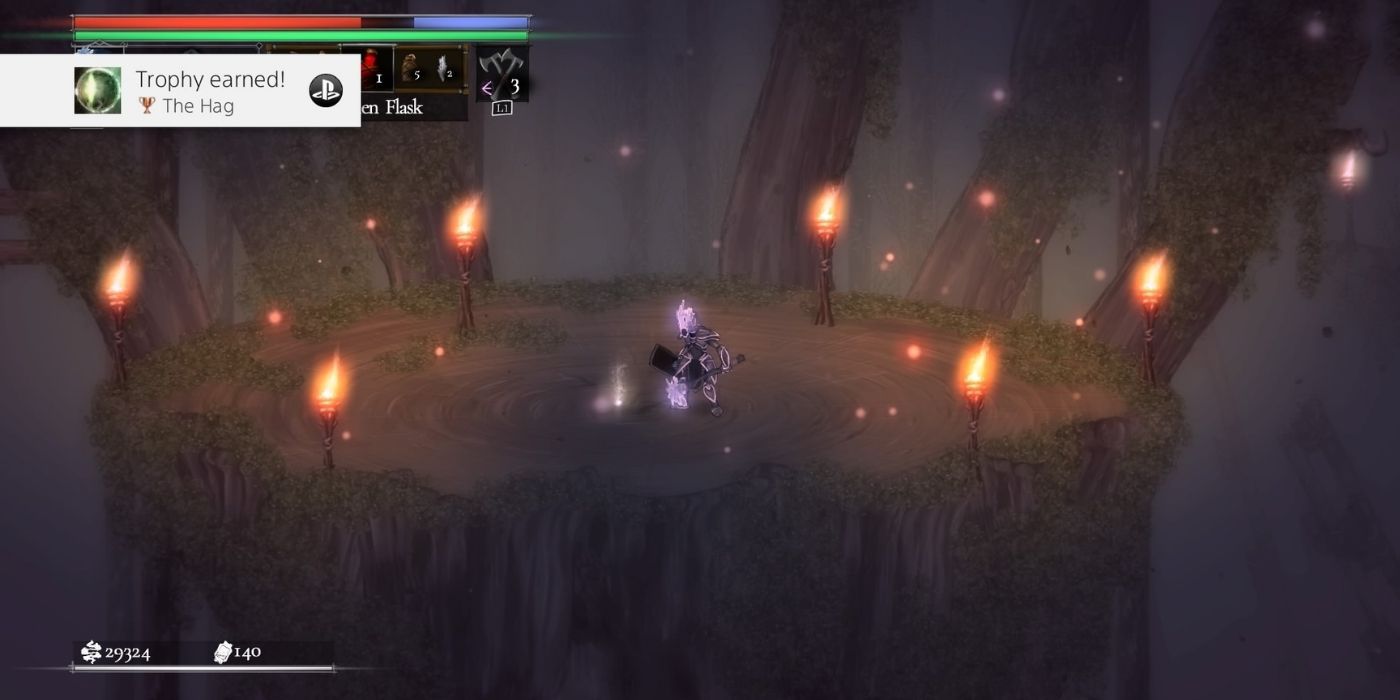 Encompassing both the majestic and tragic elements of Salt and Sacrifice’s world, the great tree is one of its few welcome sights, and the view from above is a reward for getting this far into the game’s third zone. At least, it’s a welcome sight after you defeat Marega Gredanya, a huge crone who summons human-sized dolls to ambush you while she pummels you with explosions.

Once you are able to cut her down to size, though, the tree hints at Corvus’ Mire’s mysterious past and marks you as the conquering hero of all you survey.

2 Inside The Great Tree 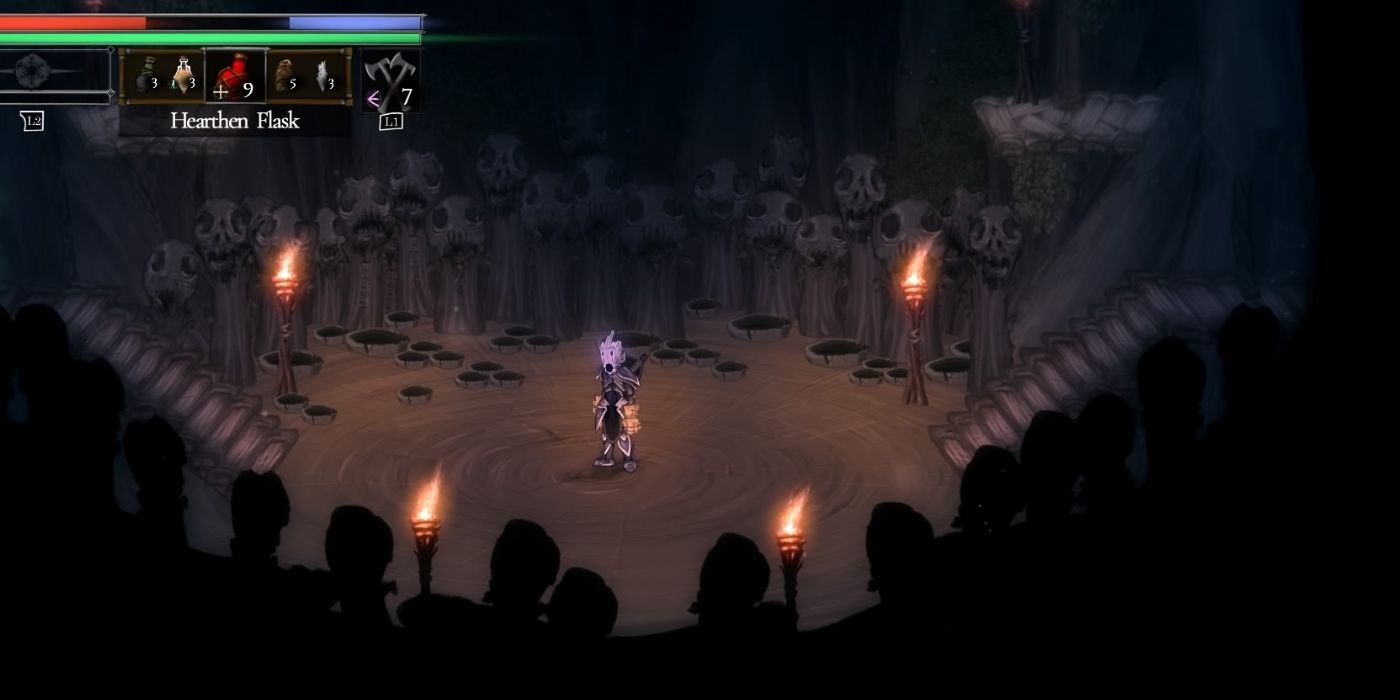 The inside of the Great Tree is another matter entirely, and the audience of what appear to be tormented souls carved in wood is a rebuff to the whole conquering hero thing. While whoever carved them did an amazing job, that doesn’t make it feel any less likely that they’ll come to life and rip you to shreds.

The good news is that they won’t. The bad news? Well, these badass carvings are a kind of foreshadowing of the boss to come called The Sapblood Heart, which is somehow equal parts wooden heart, glowing spirit, and terrifying animated creature mixed together into a killing-you cocktail. 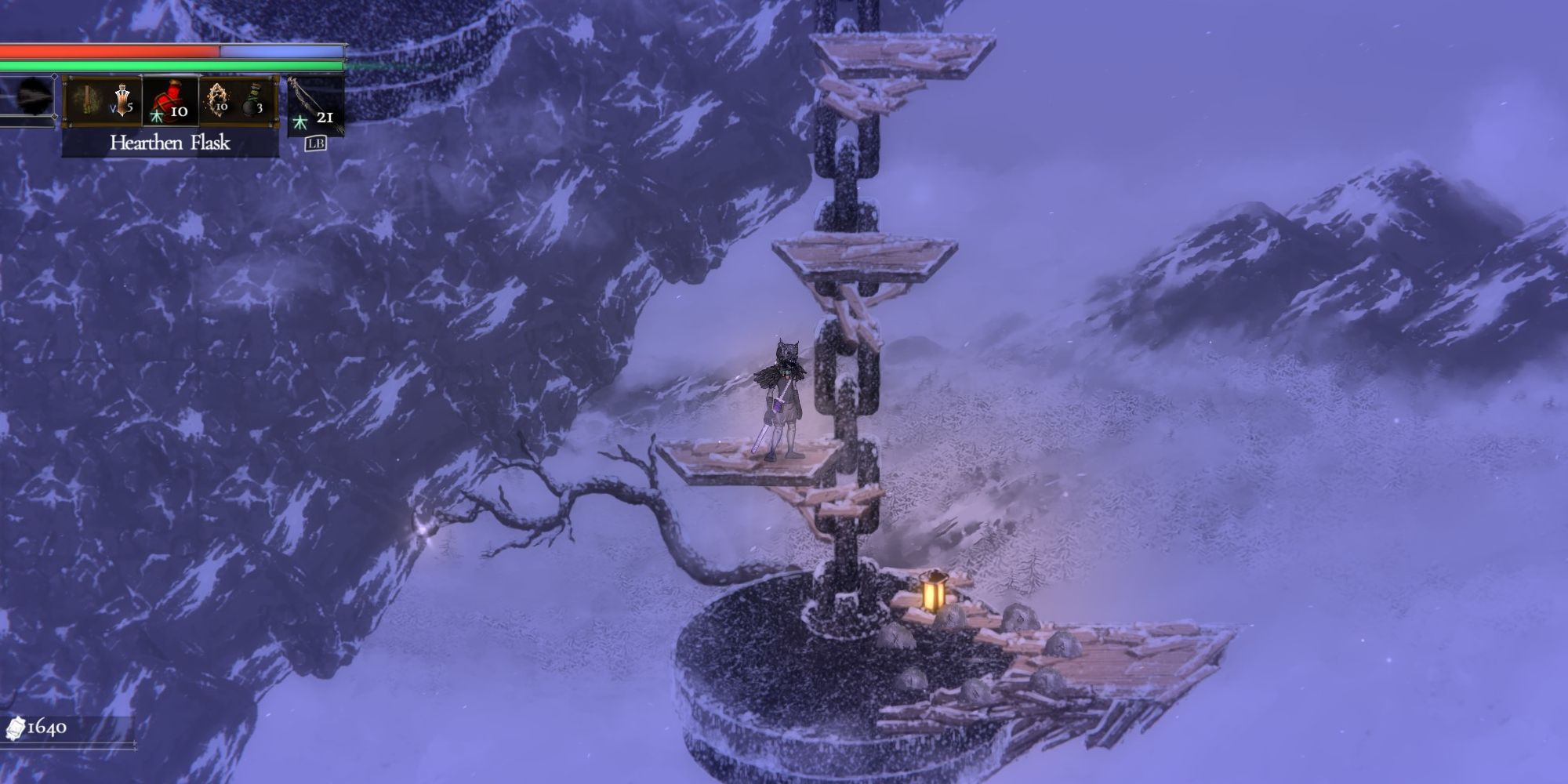 The Dreadstone Peak has majesty in its very name, and as you traverse this, the second to last area in the story, you’ll come to expect icy winds and monastic yack people who like throwing needles in your general direction.

What you might not be expecting, after gaining the static fiber and floating on numerous updrafts, is to find a gigantic chain whose links dwarf your character. Unless you’ve spoken to some NPCs at Pardoner’s Vale, you also probably weren’t expecting the chain to lead to a gigantic airship that has crashed into the mountains. Rich in story and massive in scale, the Falling Star epitomizes what makes Salt and Sacrifice’s world great, in addition to being one of the coolest things you’ve ever seen.