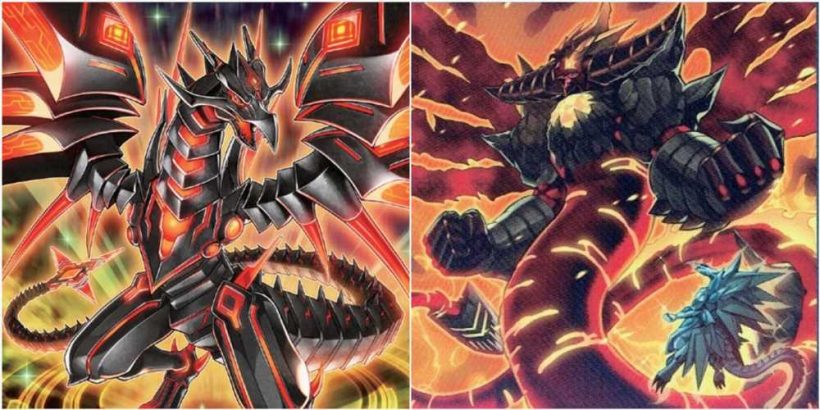 Dragons have been a staple of the Yu-Gi-Oh! card game since before the original manga revolved around it, with monsters like Blue-Eyes White Dragon, Red-Eyes Black Dragon, and Curse Of Dragon being the most familiar.

While these monsters continue getting new support, the days of Dragon-type Fusion monsters like Five-Headed Dragon and Dragon Master Knight being the strongest cards in the game have long since passed due to the inclusion of better monsters from the Fusion, Synchro, Pendulum, and Link Monster card types. But what are the best Dragons in Master Duel that can be put in the Extra Deck?

10 Trishula, Dragon Of The Ice Barrier 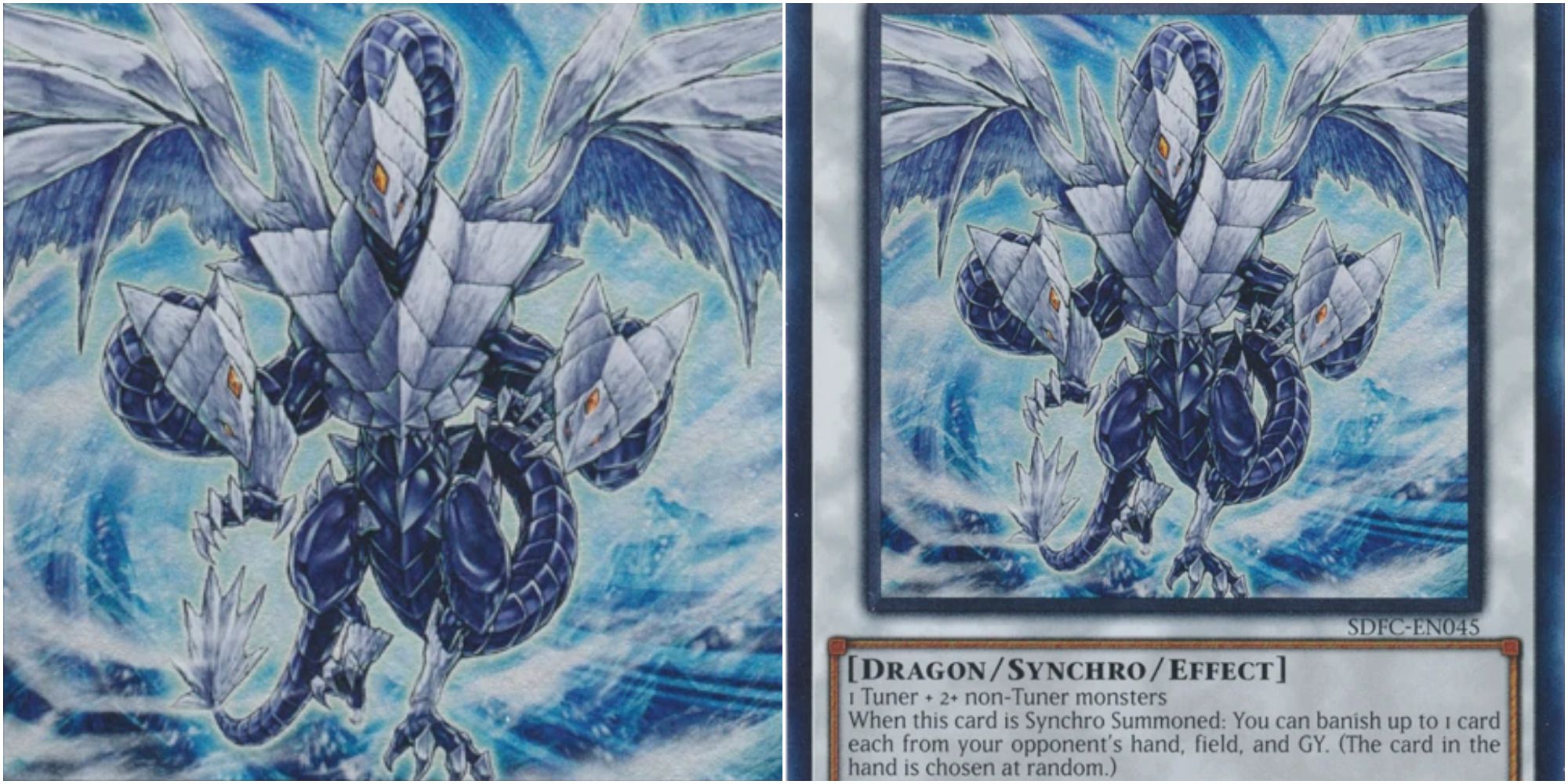 Trishula has been one of the most sought-after Extra Deck cards ever since it was first released and is still a staple of many Extra Decks. While it is part of the Ice Barrier archetype, it does not require other members as materials or for its effect, making it a much more splashable card.

When properly Synchro Summoned, Trishula can banish one card from the opponent's field, one from their Graveyard, and one randomly from their hand. It might not be once per turn, but it can be one of the most helpful cards in the game when summoned at the right time. 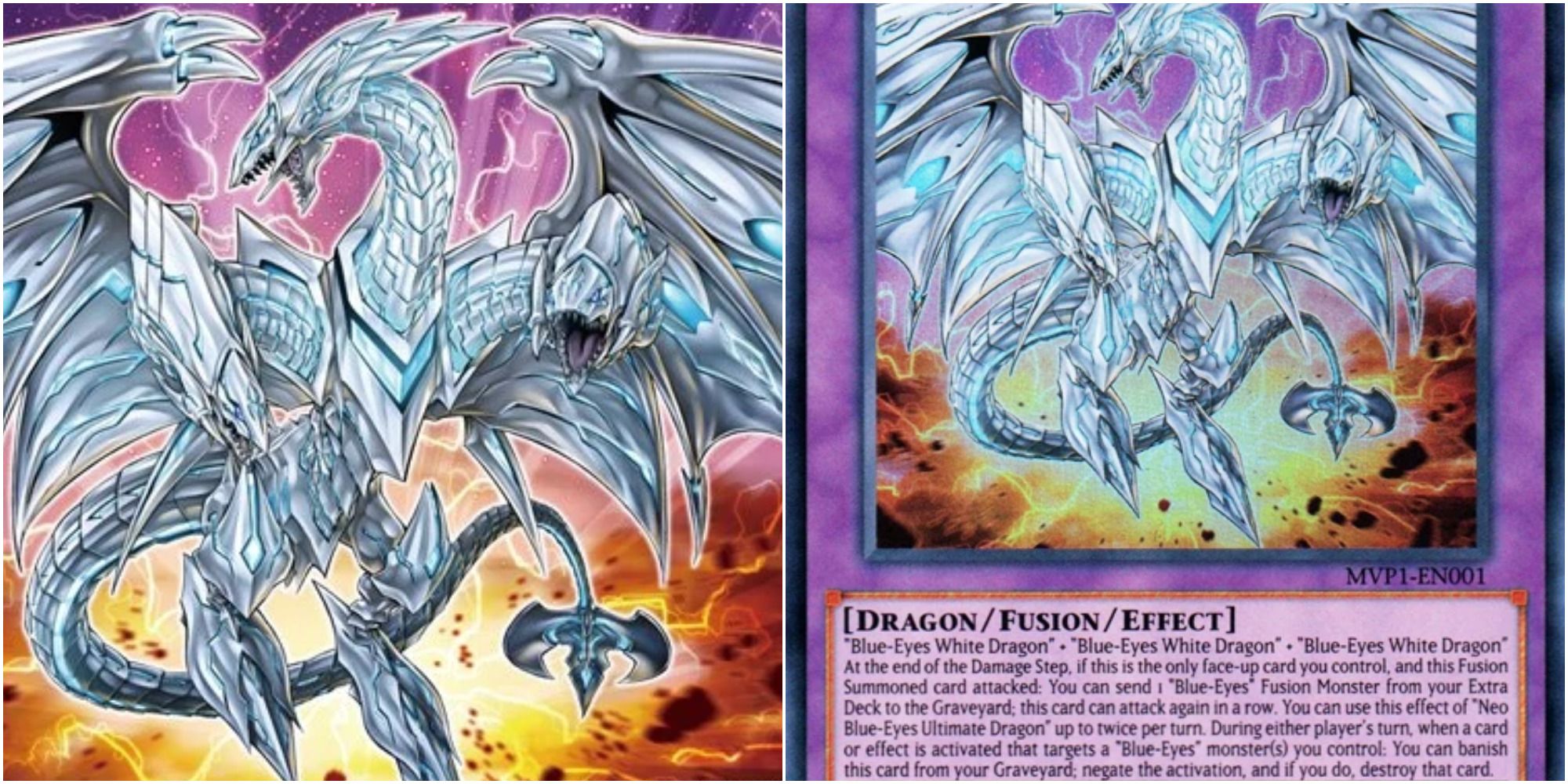 It's most useful in Blue-Eyes decks since it requires Blue-Eyes Fusion Monsters to be sent to the Graveyard to attack up to three times per turn. It can also negate and destroy any card that targets a Blue-Eyes monster by banishing itself from the Graveyard. Neo-Blue-Eyes Ultimate Dragon may not be as splashable as other cards, but it's an excellent upgrade to a legendary monster. 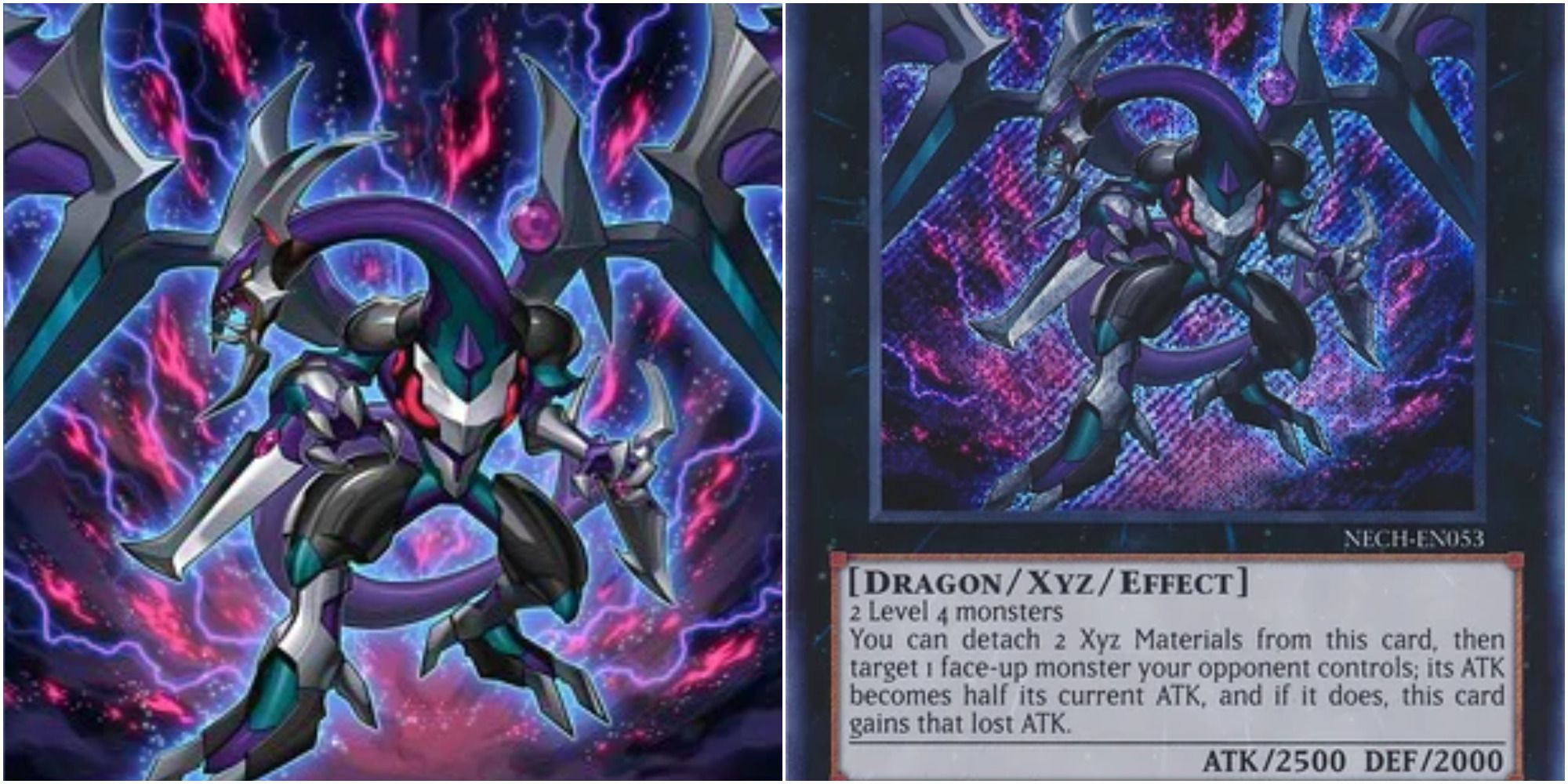 Dark Rebellion Xyz Dragon is one of the most splashable Xyz monsters available in Master Duel, meaning it can be used in various decks. This is because it requires only two level four monsters, which many decks already have.

Dark Rebellion Xyz Dragon can also easily turn the course of a duel around with its effect, halving the Attack Points of an opponent's monsters and then gaining those points for itself. It can still be destroyed in various ways, but it can be the key to victory when played at the right moment or with the right combination of cards. 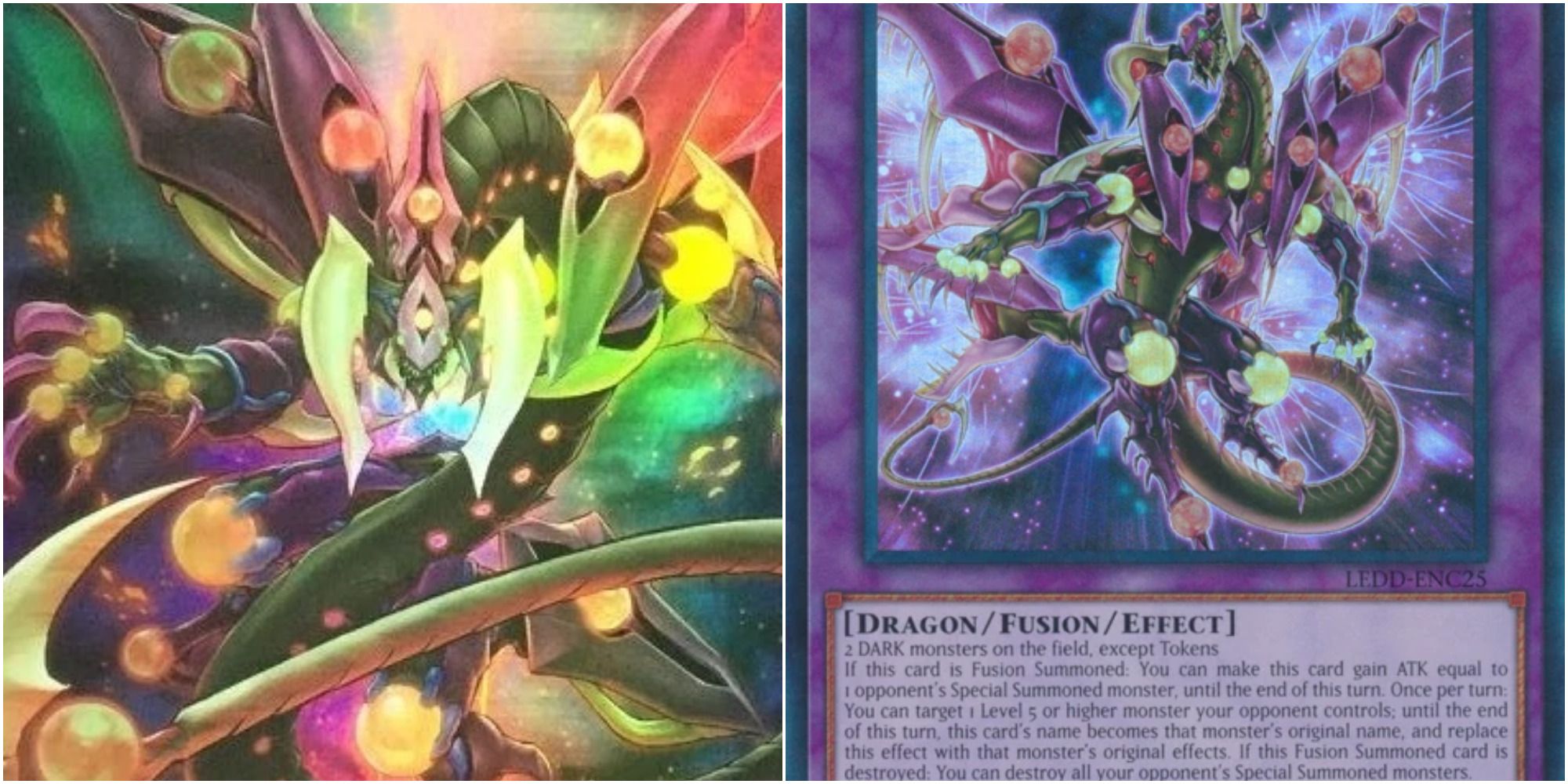 While it isn't as splashable as Dark Rebellion Xyz Dragon, Starving Venom Fusion Dragon can still be used in many decks since it only requires two Dark attribute monsters and Polymerization or a Polymerization equivalent.

Like Dark Rebellion, Starving Venom gains Attack Points from one of the opponent's monsters, although it gains the total Attack Points instead of stealing half, and the target also must be a Special Summoned monster. It can also steal the name and effects of Level 5 or higher monsters once per turn and can destroy all the opponent's Special Summoned monsters if destroyed after being Fusion Summoned. 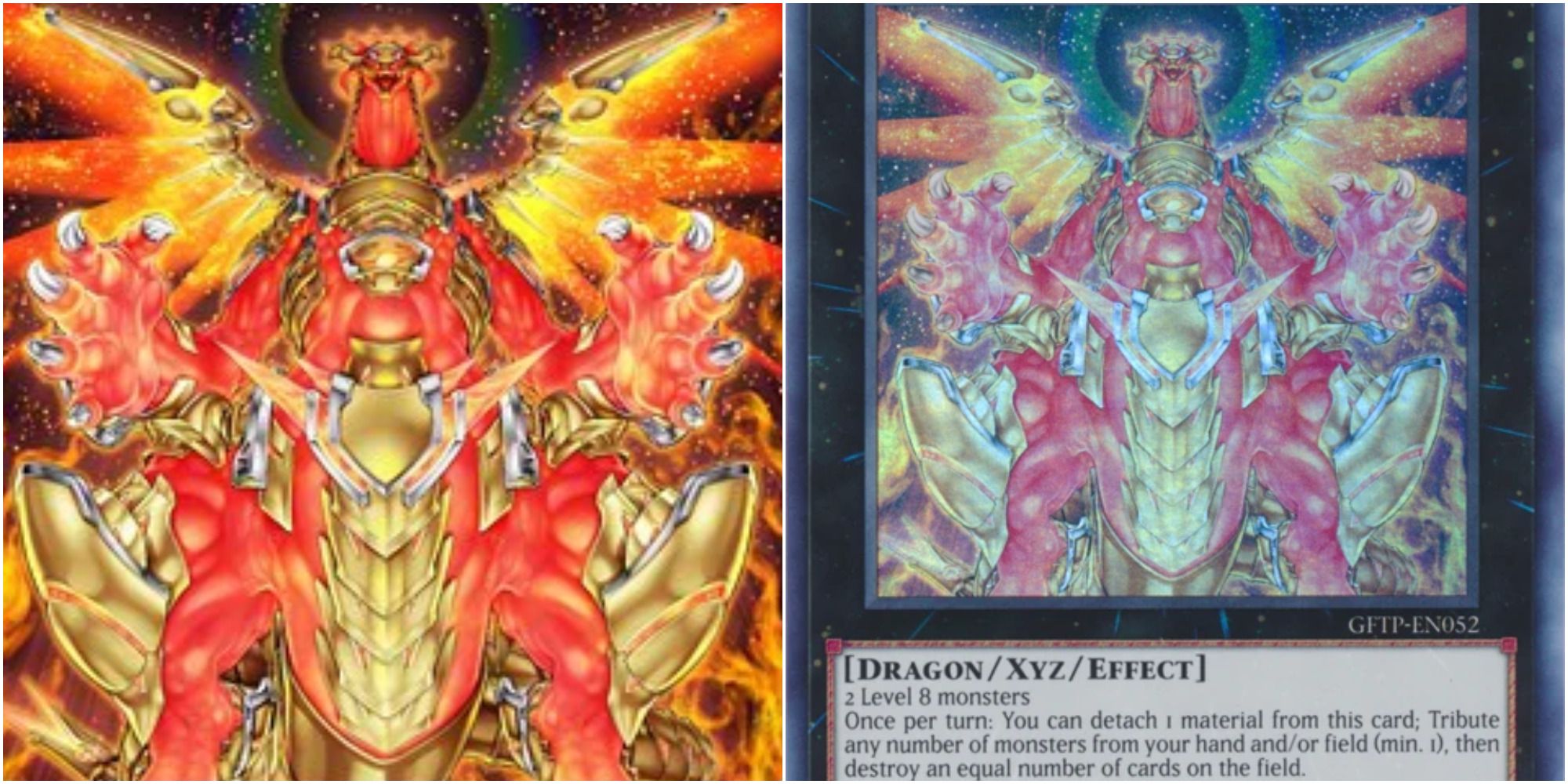 Hieratic Sun Dragon Overlord Of Heliopolis may have a long name, but its effect is much shorter than many newer cards. By detaching one material and tributing one or more monsters from the field and hand, the player can destroy the same amount of cards on the field as those tributed.

This card is useful because it can destroy the opponent's cards and the player's cards, meaning they can get rid of Continuous Spell and Trap cards they placed earlier that are just taking up space. Hieratic Sun Dragon Overlord Of Heliopolis is also the strongest monster in the Hieratic archetype. 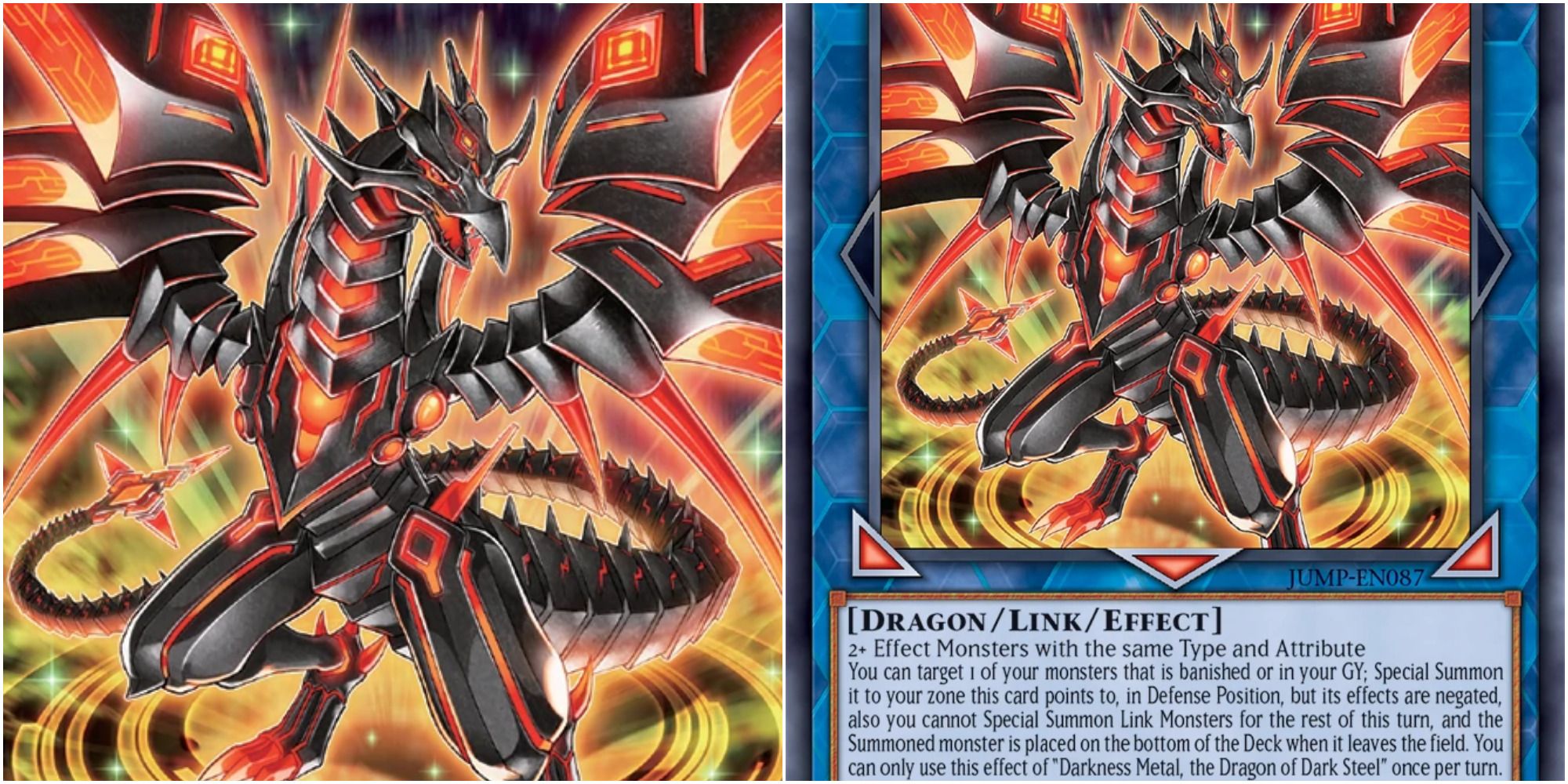 Darkness Metal expands the effect of the original by only requiring several monsters of the same type and attribute instead of a specific type or attribute, and by being able to Special Summon any of the player's banished or destroyed monsters once per turn, although they'll be in defense mode with their effects negated.

These monsters can then be used as materials or tributes and instead of going to the Graveyard, they'll be put back in the deck, giving the player another chance to use them. 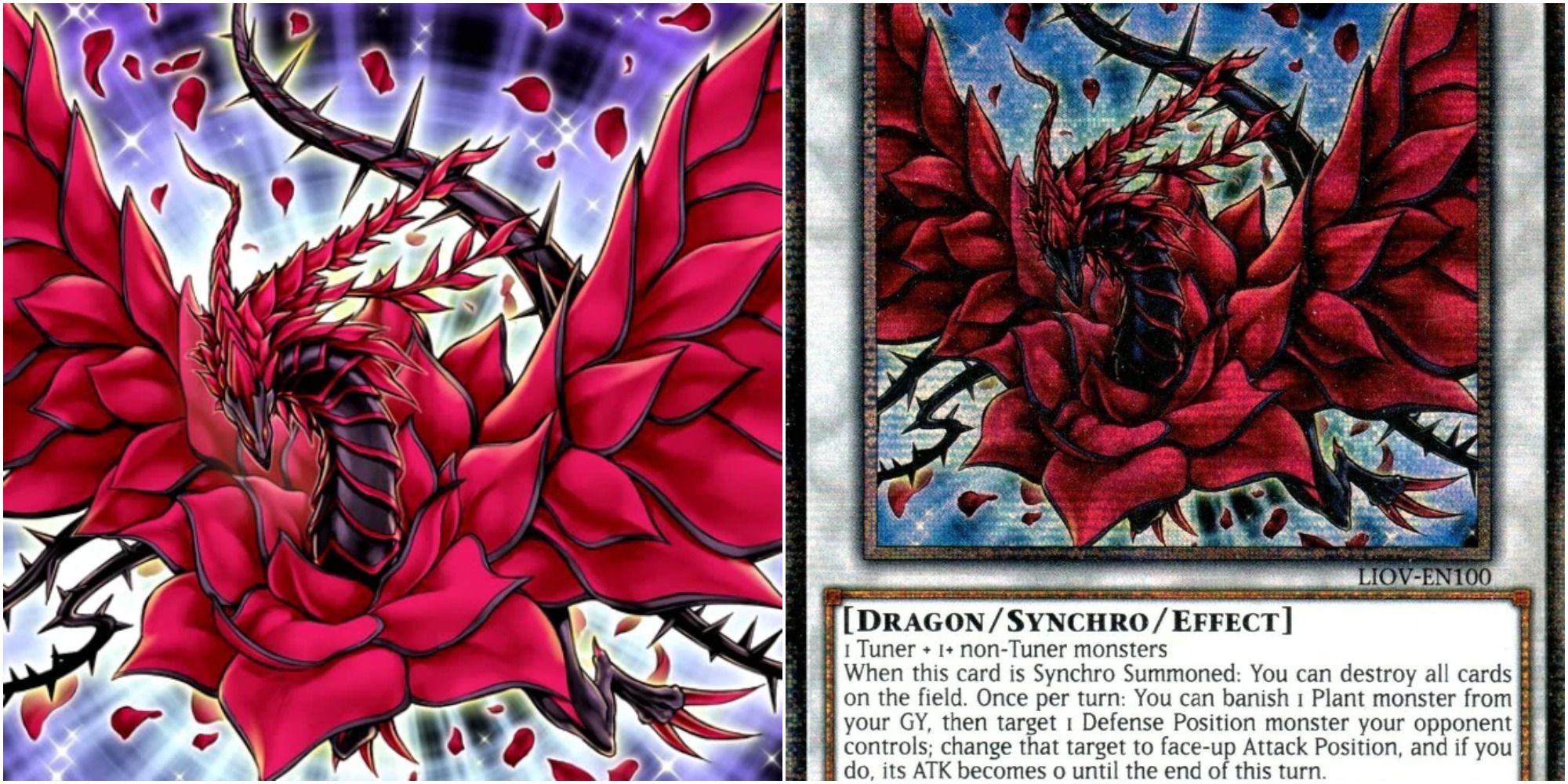 Unlike other monsters that have received upgraded forms, the original Black Rose Dragon is still the best. While its second effect is best for decks revolving around Plant-type monsters, its first effect is what helps make it splashable.

When properly Synchro Summoned, Black Rose Dragon destroys every card on the field. While this effect can seem detrimental to the player, plenty of cards can return others or prevent complete destruction. Because it destroys all cards instead of specific targets, Black Rose Dragon continues to be useful to this day and, with the right combination, can even cause a one-turn kill. 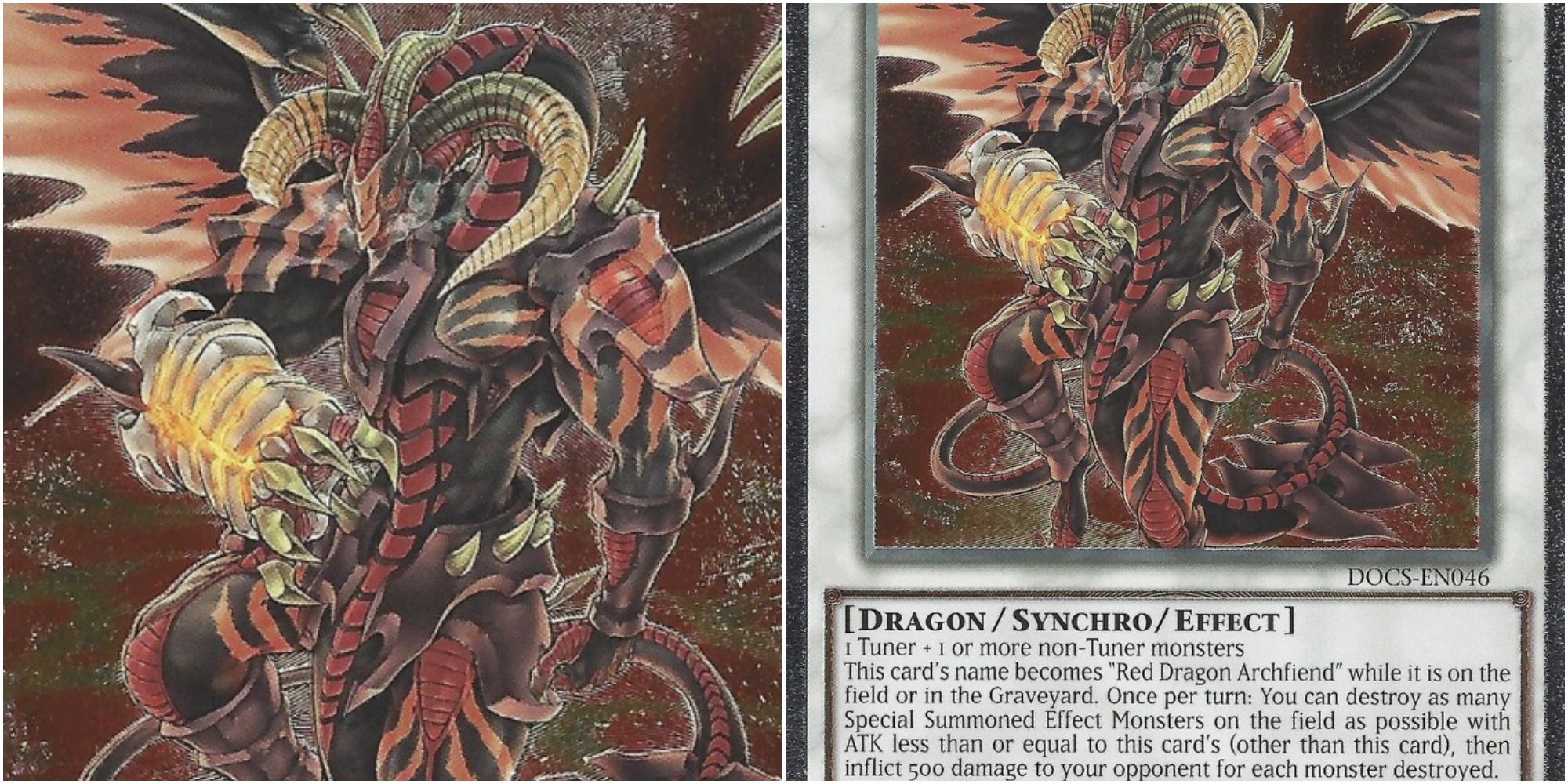 The opposing player will then take 500 damage to their Life Points for each monster destroyed, providing a great way to clear the field of monsters while still dealing damage. It may not destroy everything but will stay somewhat effective as long as most decks revolve around Effect Monsters. 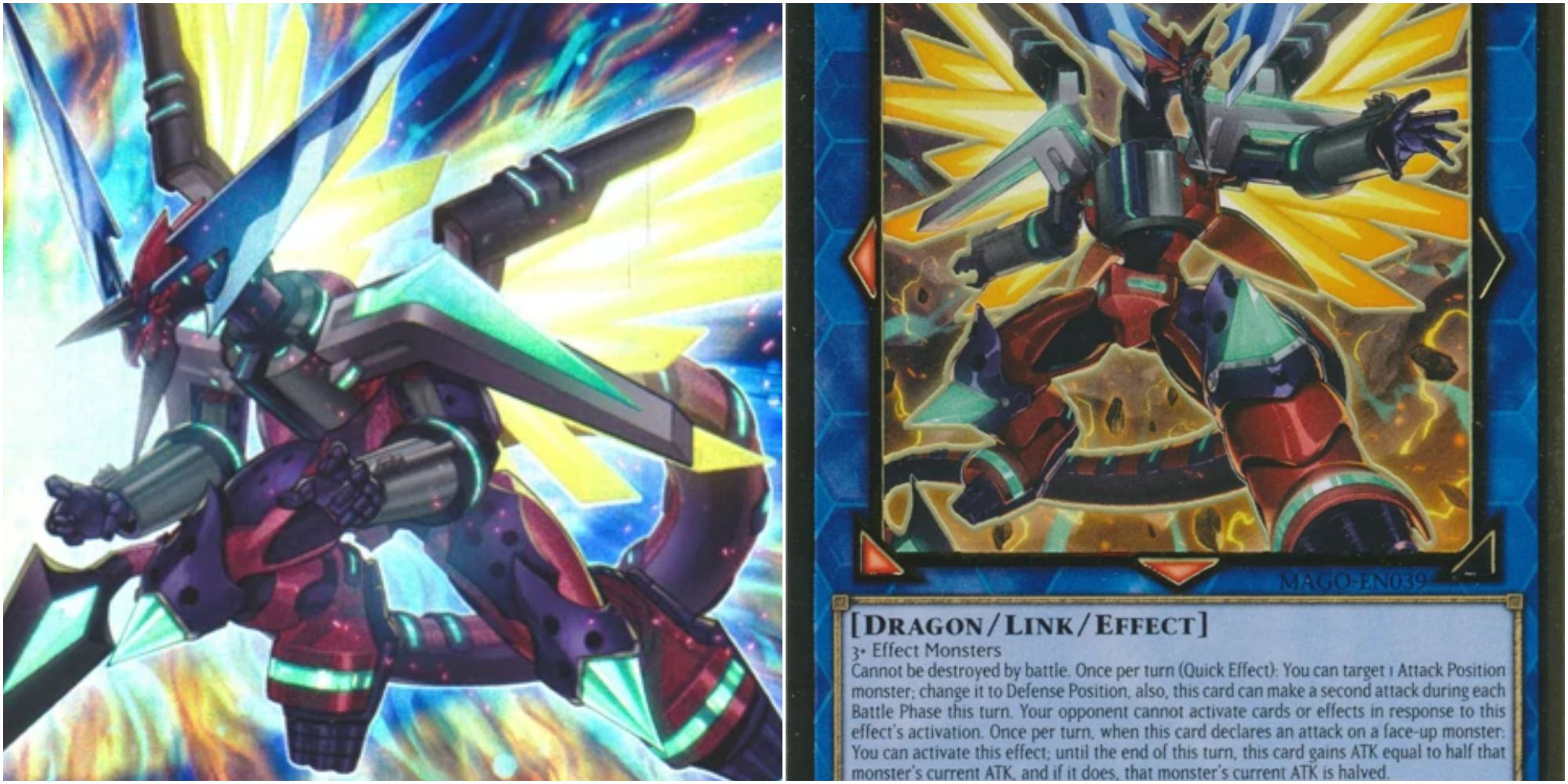 Borrelsword Dragon is from the newer Borrel archetype, which primarily consists of Dark Attribute dragon-type link monsters. Borrelsword Dragon can't be destroyed by battle, can change one Attack Position monster to Defense Position, and can attack a second time during the Battle Phase when this happens.

Players could always try to negate this effect, but cards and effects cannot be activated in response to it, so the best way to counter it is to negate its summoning entirely. When Borrelsword attacks, it can also steal half the Attack Points of its target, learning from its predecessor Dark Rebellion Xyz Dragon. 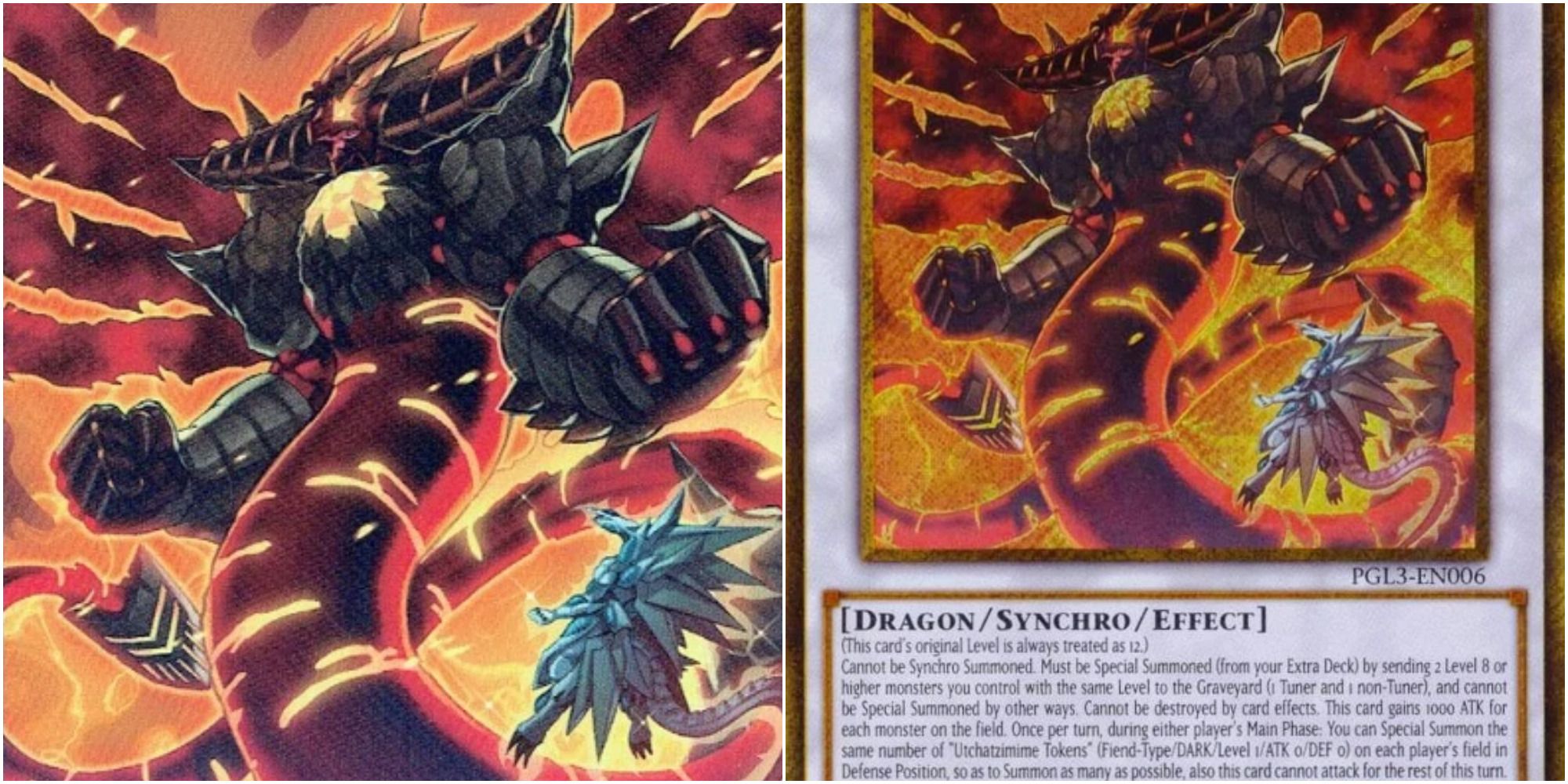 While this Bishbaalkin seems difficult to summon, with the right cards, it can easily be summoned on the first turn before the opponent can do anything. It also can prevent the opponent from doing anything since it takes over the entire field by summoning Tokens.

Additionally, each token gives it 1000 Attack Points, meaning it can have up to 9000 total. However, it still has some weaknesses as the Tokens have no rules against being tributed, and Bishbaalkin itself cannot attack the same turn it uses its effect. Despite its limitations, it's still one of the most powerful Dragons in Master Duel.