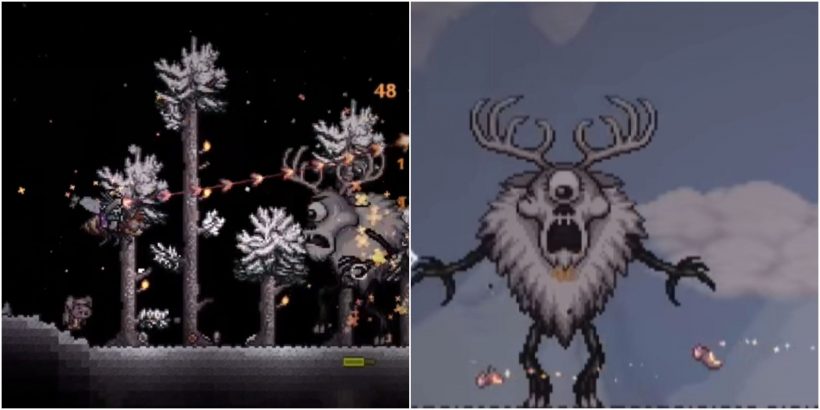 One feature that makes Terraria so unique is its variety of boss fights. There are lots of bosses to defeat in Terraria, so fighting all of them is a goal for many Terraria adventurers. Bosses come in all shapes and sizes, but Deerclops is one of the most imaginative boss fights in the game.

You can encounter Deerclops in Snow Biomes, but the real challenge is defeating it. Like other bosses, Deerclops grants a few useful rewards upon dying. Here's how to find and defeat Deerclops in Terraria, as well as every possible reward you can earn from it.

How To Locate Deerclops 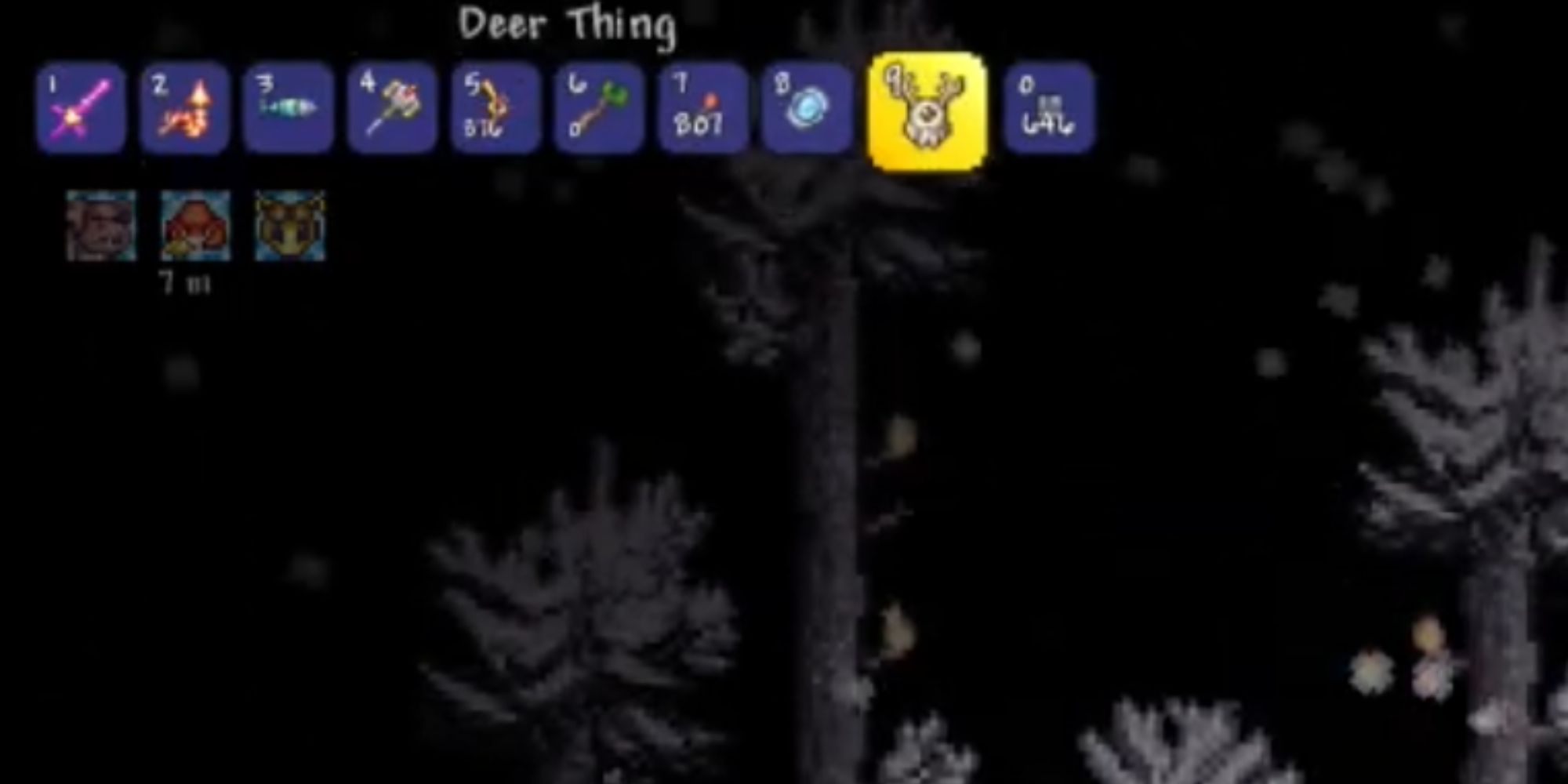 There are two methods you can use to locate Deerclops. You should only search for Deerclops once you have access to powerful weapons and armor because it's a very challenging boss. There aren't any specific requirements you have to meet to fight the Deerclops boss.

The primary way you can encounter Deerclops is by traveling to a Snow Biome. Deerclops will only spawn in a Snow Biome during a blizzard, and it has to be midnight. You or another player on the map need 200 health or nine defense before Deerclops will spawn.

Use The Deer Thing

Once you have the Deer Thing in your inventory, travel to a Snow or Ice Biome and use it. Deerclops will appear regardless of the time of day, and you can begin the battle.

How To Defeat Deerclops 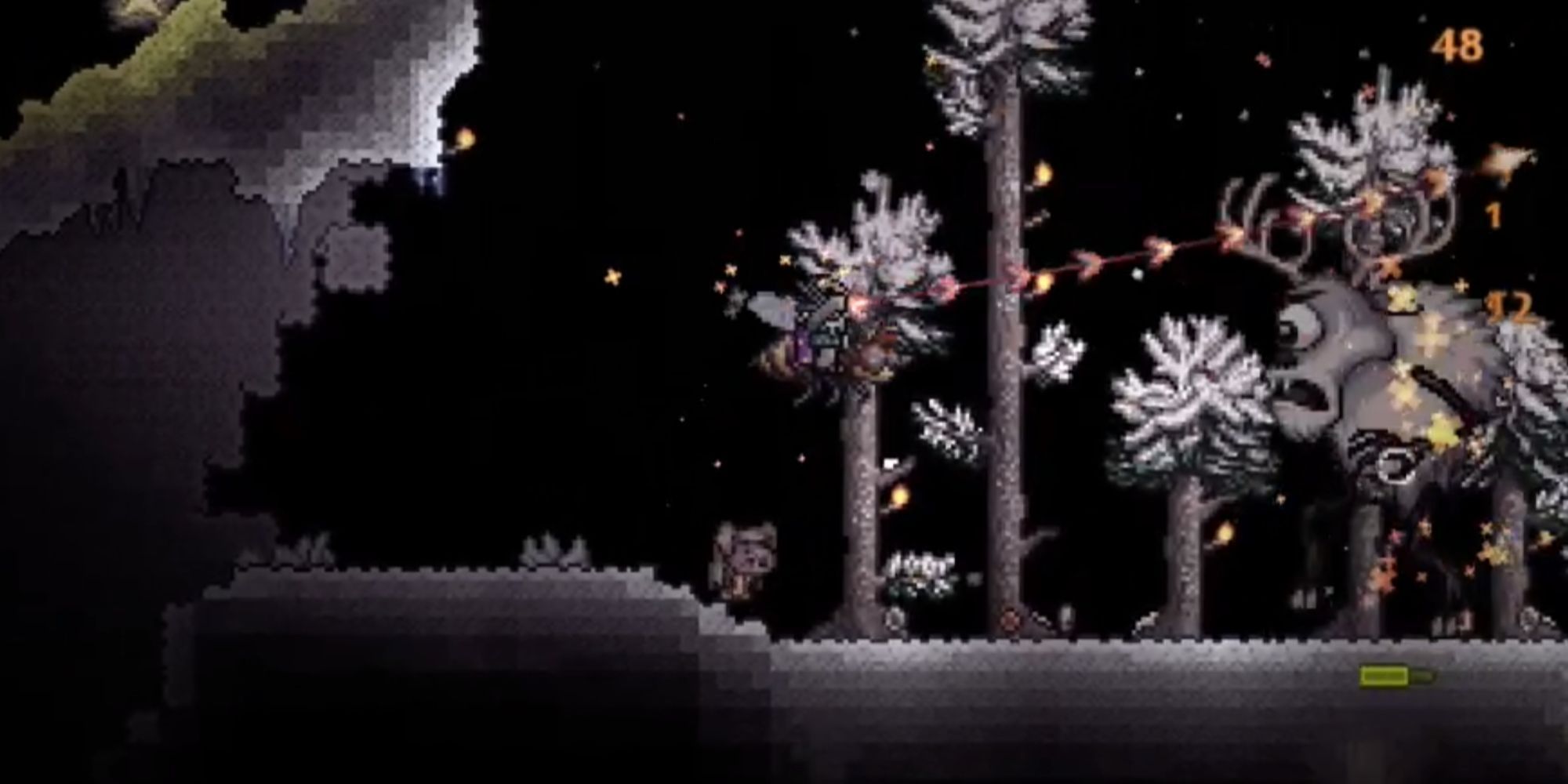 Damaging Deerclops is difficult, but it's also hard to avoid many of its attacks. Deerclops has 7,000 HP in Classic Mode, 14,000 HP in Expert Mode, and 21,000 HP in Master Mode. Here's everything you should know before jumping into the boss fight.

Deerclops has a wide range of attacks. The first attack you should be aware of is its roar because you'll be inflicted with the Slow debuff for 12-30 seconds if it manages to hit you. Deerclops will stand in the same location for the majority of the roar, so it's an easy attack to dodge once you know about it. However, the Slow debuff can be devastating since the Deerclops moves very quickly, so don't let it hit you.

Once it gets close to you, the Deerclops boss also has a trick up its sleeve. It can summon ice spikes that will travel along the battlefield, and unfortunately, they're very quick. Using Wings or other air-traversal equipment can save your life against this attack. Deerclops can also throw piles of ground at you, but this will only occur if you're far away from it. This attack isn't as quick as the ice spikes, so it's not a large threat.

If you manage to get above the Deerclops boss during the fight, it can summon hands near you, so you aren't completely safe even if you can fly above it. The shadowy hands are even worse in Expert Mode because they have a larger range of motion, making it difficult to avoid their attacks. Try not to stay above Deerclops for too long because the hands will likely overwhelm you, especially on Expert Mode.

How To Damage Deerclops

Deerclops is a tough boss, but there are a few strategies you can put to use to win the fight. The first is to build a structure a few blocks high near Deerclops. Don't make it too high otherwise Deerclops will summon its shadowy hands. Make sure to add stairs to the side Deerclops is facing. The point of the structure is to get Deerclops to climb onto it because then it can't use its throw attack, which is one of its main moves.

The other important rule you should follow is to bring Wings or other equipment that allows you to fly. Although you shouldn't get too high above Deerclops, many of its attacks are avoidable by flying above them, such as its ice spikes. Attack Deerclops with a ranged weapon while flying at around the height of its chest. Deerclops will have trouble hitting you since its ice spikes attack is ground-based.

If you pair Wings with the previous structure strategy, then Deerclops is an easy boss fight because it can't hit you with the ice spikes or its throw attack.

Every Reward You Earn For Defeating Deerclops 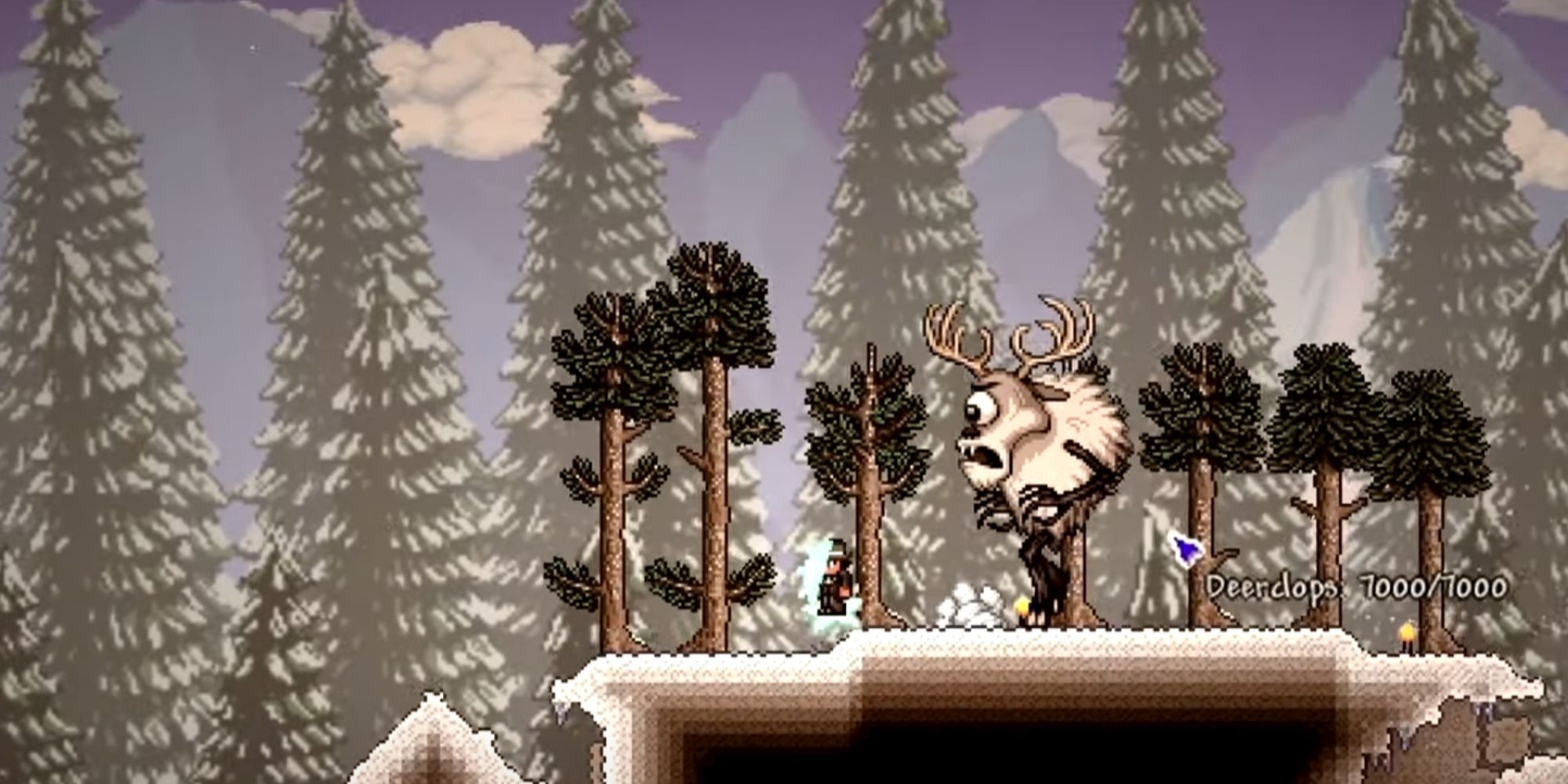 Deerclops is a generous boss in terms of rewards, so you can acquire a lot of useful items by defeating it. Other than five coins, there are many items that have a chance to drop upon its defeat. Below are the exact percentages of each item.

Of the possible rewards, there are four items that you can only get one of upon each defeat of Deerclops; the items include the Weather Pain, Lucy The Axe, the Pew-Matic Horn, and the Houndius Shootius.