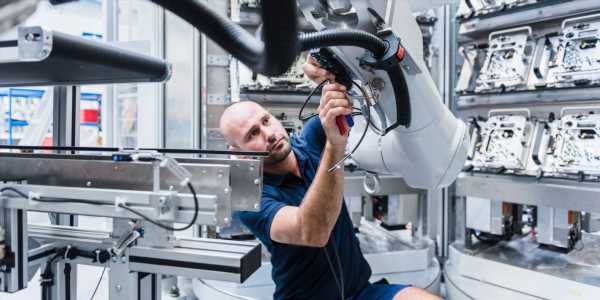 Emeryville, California-based industrial robotics startup Symbio Robotics today emerged from stealth with $30 million in funding. The company says the capital will be put toward further developing its technology as it looks to sign new customers.

McKinsey pegs the automation potential for production occupations at 79%, and the pandemic is likely to accelerate this shift. A report by the Manufacturing Institute and Deloitte found that 4.6 million manufacturing jobs will need to be filled over the next decade, and challenges brought on by physical distancing measures and a sustained uptick in ecommerce activity have stretched some logistics operations to the limit.

Symbio, which was founded in 2014, claims its software can help by allowing factory-floor robots to “learn” what to accomplish. The company’s middleware lets developers use modern programming languages like Java, Ruby, and Python to create instructions for single or whole fleets of robots. The platform self-optimizes over time, letting robots improve on tasks they’ve been assigned.

From subassembly to final assembly, Symbio’s software supports automation that can adapt to variations in processes. Using AI and feedback from automation sensors, Symbio can help a robot to recognize and pick bins containing randomly distributed parts, or adjust to things like unique fastener positions and orientations. Moreover, Symbio can enable robots with cameras to track moving parts while executing high-precision tasks.

“Symbio is doing for manufacturing what Windows did for DOS. Existing industrial manufacturing robots run proprietary programming languages making them slow and cumbersome. Not only do these robots lack dexterity, they lack the intelligence to make them do what they need to do,” cofounder and CEO Max Reynolds said in a press release. “Our technology is designed to fundamentally reframe these existing manufacturing pain points by utilizing the best practices of AI and human robot interaction. That’s what we believe will drive success.”

Symbio says it’s already working with Nissan and Toyota in addition to other automotive companies. The recent investment was led by ACME Capital with participation from existing investors including Andreessen Horowitz, Eclipse Ventures, and The House Fund.

Symbio’s fundraising follows a decade of multimillion-dollar bets on warehouse, logistics, and assembly automation. Amazon acquired robotics company Kiva Systems for $775 million in March 2012, and in November 2019, DHL announced it would invest $300 million to modernize its warehouses in North America with IoT sensors and robots. Separately, startups like Attabotics and CommonSense Robotics have raised tens of millions of dollars for compact automated fulfillment centers that can slot into tight spaces. Others like Covariant and Soft Robotics have won over investors with control systems that can pick, place, and unload objects in warehouses.