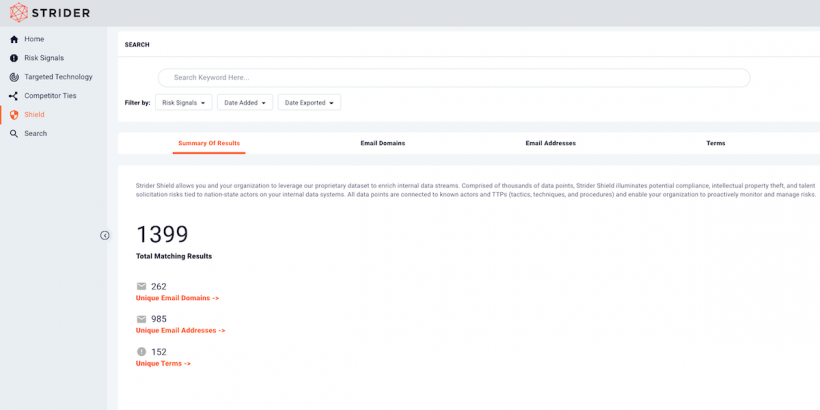 Strider Technologies has launched a risk intelligence tool that enables enterprises to better understand potential threats to intellectual property (IP) by analyzing online interactions of employees and individuals that interact with the company.

Via Strider Shield, an organization can collect thousands of data points, including email addresses, domain names, keywords in multiple languages, and other terms that can be correlated against internal systems where IP resides to identify activities that may pose a risk to their organization, he said. This approach makes it possible to surface high fidelity risk signals created by known actors as they, for example, visit websites or engage with people on social media sites, in addition to analyzing the tactics, techniques, and procedures often employed to steal IP, added Levesque.

This capability also makes it possible to include economic statecraft analysis to track the source of those threats back to a nation-state that is most likely trying to benefit from the theft of IP, Levesque said. “It’s become a geopolitical issue,” he added.

The techniques Strider is using leverage data that is freely available online so it should not compromise anyone’s privacy, Levesque said. But the company does correlate data to help organizations identify threats that might be aimed at specific individuals with access to IP sought after by cybercriminals working on behalf of a nation-state, Levesque said.

In general, organizations are now shifting their security focus to concentrate on processes and the people that drive them, Levesque noted. Rather than just attacking systems and applications, cybercriminals are increasingly exploiting weaknesses in processes. As such, Levesque said organizations are starting to converge the management of cyber and physical security to better protect employees and safeguard their IP.

The cost of having IP regularly stolen is measured in the billions. Nation-states have expanded their cyberespionage activities to include IP that aids their economies. In response, organizations of all sizes are increasing their efforts to protect IP and prevent a clone of a product or service they are about to launch suddenly becoming available in a country located halfway around the world.

Nation-states have been stealing IP from companies since the dawn of time. The only real differences today are the means and the scale. It’s not uncommon for organizations to invest millions of dollars creating IP, only to find their return on that investment reduced by the sudden appearance of an unexpected competitor. As the level of IP theft continues, government leaders are starting to have a greater appreciation for the way IP theft impacts both the economy and, ultimately, the amount of taxable revenue that might be generated by those innovations.

There is no silver bullet when it comes to preventing the theft of IP. But organizations can proactively reduce risks by becoming more aware of threat vectors as they emerge. If known actors are suddenly spending a lot of time researching a topic online, chances are good some sort of operation is being planned. In many cases, that knowledge might prompt an organization to review its security processes. After all, even in the digital age, being forewarned is still the first step to being forearmed.