Spatial has unveiled its social augmented reality workspace on mobile devices, allowing people to log into its 3D experience in a way that makes the virtual workplace more accessible.

The new app for iOS and Android will give mobile users access to the same kind of experience that Spatial‘s users can get in VR, though without some of the bells and whistles. The app is meant to help people escape Zoom fatigue by beaming holographic teammates right into their living room.

The New York company recognizes that VR headsets, while coming down in price, aren’t ubiquitous yet. Spatial was re-designed from the ground up to be mobile-first and leverage ARKit or ARCore to allow users to participate in a holographic AR experience on a smartphone.

During the pandemic, Spatial said its usage has exploded to more than 130 times and over half a million meeting joins since the start of the year.  With hundreds of hours spent in Spatial each day, this trend is being accelerated by remote working and social isolation. Bigger customers include Ford, Deutsche Telekom, Pfizer, Mattel, hospitals, and others.

“We started out as an AR company, mostly working with enterprise companies. But since a pandemic started, we launched in May,” said Spatial CEO Anand Agarawala in an interview with VentureBeat. “Quest headsets were scarce at that time. We saw a big bump in May, and we saw a second bump when the Quest 2 came out and it was more available. About 75% of our users are small businesses or individuals who are using our product. And they’re using it for a variety of different things. They’re using it to get together for holiday parties or socials. And even small companies are starting to buy headsets for their entire teams.”

But access to VR/AR headsets remains a barrier for so many. With billions of AR-enabled smartphones on the market today, Spatial hopes it can enable better ways to connect for many.

Above: You can hold non-Zoom-like meetings in Spatial.

Agarawala that the company wanted anyone to be able to take advantage of virtual workspaces. And you can do that simply by holding up your smartphone and turning it in different directions to explore 3D spaces where other members of your team may be exploring the space in full immersion in VR.

Spatial has added key features to make it work on mobile.  These include automatic camera switching to allow mobile users to easily see who is talking on a smaller screen.  The mobile-centric user interface allows your avatar to move
and interact with models, documents, or videos in 3D.

If you’re not at your home, it might be tougher to join a meeting in VR. So for those on the road, Spatial on mobile can make the meeting more accessible.

“This is the culmination of years of work in making Spatial meetings accessible to everyone,” Agarawala said.

Spatial customers range from those who are planning or doing review sessions to popstars high-fiving their fans in virtual spaces. They include church groups, virtual plays, college students collaborating on projects, Christmas parties, COVID response teams, and more.

A demo in VR 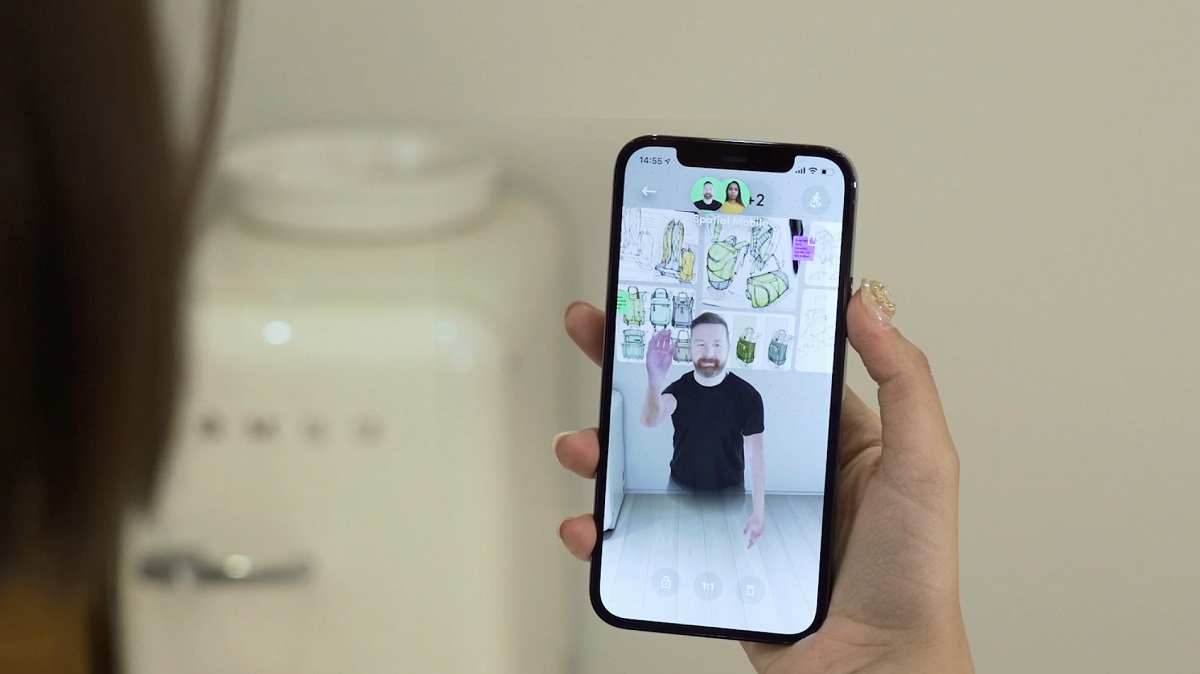 Above: Spatial has some pretty cool AR effects.

Aaron Dence, product manager at Spatial, gave me a tour of Spatial in VR while I was wearing an Oculus Quest 2 VR headset. He and Agarawala greeted me with high-fives when I joined their demo room. The room had integrations with Slack, Google Drive, Microsoft 365, Sigma, and 3D modeling imagery. You can switch rooms easily and teleport from one part of a room to another. You get a real sense of presence, or the feeling of being in a virtual place. You can upload your own image into the app and Spatial can create an avatar for you. Dence demoed how easy it was to bring up a Slack channel.

We teleported into a 3D shop where I could assess the design of a retail setup. The abstract spaces that you can play around with are about 100 virtual meters by 100 meters. Spatial says it’s ideal for visualizations and brainstorming sessions. It’s easy to go to web sites while you’re in Spatial, and you can watch videos in a group. People can join via webcams and watch what’s going on in Spatial via the web. You can bring virtual items into Spatial from the web and use it inside Spatial. The app also has persistence. If you leave and come back later, the room will be the same.

A demo in AR

Then we shifted over to the smartphone. I was able to join the same meeting, using an iPhone. If you put your both thumbs down on the phone display, you get more fine-grained control for navigating the environment. The content in mobile is interactive. You can grab a newspaper and move it closer or farther away, or you can use two fingers and move the object up or down. If you pinch your fingers on the screen, it will zoom in until you have a first-person view. You can zoom out by doing the opposite gesture. You can have dozens of people in a room for meetings. There’s an autocam button that will make the avatar who is speaking in a meeting pop up on the screen, so you don’t have to figure out which person has the floor in a meeting. The camera switches to whoever is talking in a snap, even if that person is joining from the web app.