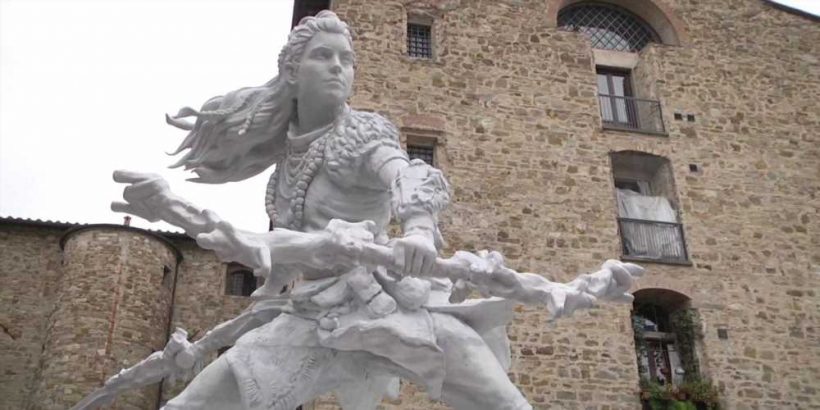 Sony has revealed a brand-new statue that has been constructed in Florence, Italy to celebrate to launch of Horizon Forbidden West, whilst also commemorating heroic women across history. The statue is officially called "Aloy – The Placeholder", titled that way in an attempt for the country to recognize famous women across history due to the country's lack of representation.

It's also titled "The Placeholder" because the statue isn't going to be there forever. It would be little strange if Sony permanently constructed a statue of an iconic American character in the middle of Italy to bring attention to famous Italian women. Instead, the statue will remain there until February 27 before being taken down.

The statue also has a message below the title which reads: "An icon of courage, tenacity, and resourcefulness holds the place for all the women in history who have shared these values and would deserve a statue." It's quite a lovely gesture from Sony that just so happens to double up as pretty good marketing.

Sony has also dedicated support to the Event Horizon School of Digital Art in Florence, an institution which offers classes to students who wish to get into the games industry.

Strangely enough, this isn't the only act of generosity from Sony linked to the launch of Horizon Forbidden West. The publisher recently announced a collaboration with the Arbor Day Foundation, a charity dedicated to the reforestation of areas devastated by wildfires. Sony has promised that it will plant three trees for every player who earns the "Reaching the Daunt" trophy before March 23, or until it reaches its goal of 288,000. With today's news and Sony's tree planting collab, it's nice to see at least one publisher using its gains in positive ways.

As for Horizon Forbidden West itself, the game is currently available for both PS4 and PS5, although you're better off buying the PS4 version no matter which version you actually want. If you'd like to know more about the game before you pick it up, you can read our review here.