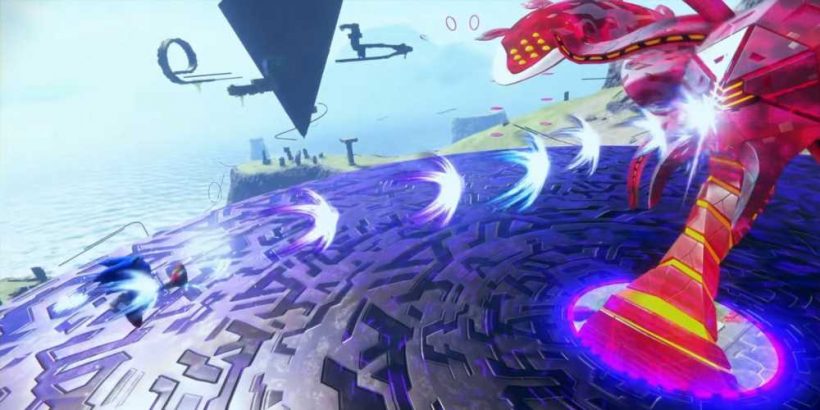 Sonic Frontiers is Sonic’s first foray into the open world, and fans are understandably a bit nervous. The past week has shown much of the mysterious islands where Sonic Frontier’s is set as well as some of Sonic’s new moves, which includes a flurry of punches and kicks, a tornado kick, and a rapid-fire projectile ability. Still, some fans aren’t all that impressed, and are even calling for Sonic Frontiers to be delayed just based on the previews alone.

Yesterday’s hands-on previous had IGN saying that such drastic measures aren’t really necessary. Although there are certainly still bugs to work out and boss fights to perfect, Sonic Frontiers still works well in its new "open-zone" genre.

Part of the concern comes from the bizarre contrast of the realistic natural landscape and the more traditional trappings of a Sonic game. Bumpers, speed ramps, rails, and spinning gold rings litter the open world and can appear quite jarring when juxtaposed with the trees, birds, and bizarre robotic enemies. It all looks more than a little weird, but that’s apparently by design.

"Past games in the Sonic series have taken different tones depending on their story and themes," said Sonic Team creative officer Takashi Iizuka. "This time, these mysterious islands are the game's major setting. That's why our artists have worked hard to create a mysterious mood."

Some of those mysteries can be easily solved through simple puzzles. Sonic can interact with the environment, turning statues, jumping on flashing tiles, and using his new Psy Loop ability to activate ancient artifacts or to bust through robotic defenses. Other new moves include dodging and parrying with the bumper buttons and homing attack that combos into a furious flurry of blows. Those moves can be improved by spending experience points on a new skill tree.

Bosses play a key role in Sonic Frontiers as well. Wandering Shadow of the Colossus-style boss fights provide gears that can open portals to small linear stages that will remind fans of Sonic’s classic bonus stages. Complete challenges in the bonus stages to unlock vault keys that can be used to obtain the Chaos Emeralds.

We're still not sure what the Chaos Emeralds are doing on this mysterious island, but the recent Sonic Central presentation confirmed an animated prologue to Sonic Frontiers will answer that question later this year. And it'll star everyone's favorite echidna, Knuckles.