Reddit’s massive collaborative art project, r/place, was a fascinating moment and experiment in internet history; it allowed Redditors to amend an enormous canvas by changing a single pixel from a 16-colour palette every five minutes (I, myself, have haphazardly decided to place a single pixel to clean up an errant pixel placed on a dedicated pixel painting to Berserk creator, Kentaro Miura). The mural was open for editing by any Redditor for four days, and was closed for editing on April 4 this month, which resulted in a splendid collection of micro-images that will be discussed and examined for years to come.

If you want a closer look at the finer details in these images without straining your eyes that much, there’s a little game you can play. This game is r/place guesser, a free game hosted on itch.io. Essentially a hidden object game, r/place guesser takes a small snapshot from the gigantic r/place canvas, gives you a few seconds to contemplate and memorise its intricacies, and then asks you to locate and pin a flag onto the giant canvas itself. You have five rounds, and the faster and more accurate you are, you’ll be awarded more points.

That said, if you’re a bit of a masochist, you can also adjust the “zoom level” of the snapshot you’re given, which can mean that you’ll be given an even smaller part of the image to identify later on. This is obviously more challenging, but it also awards you more points, with a high score you can use for bragging rights and share in the comment section afterwards. And if you’re a true blue, hardcore masochist who has already memorised every single detail on the canvas, you can also play the game in hardcore mode. This douses the entire canvas in grey after showing you the snapshot, so you can pin the location blindfolded. 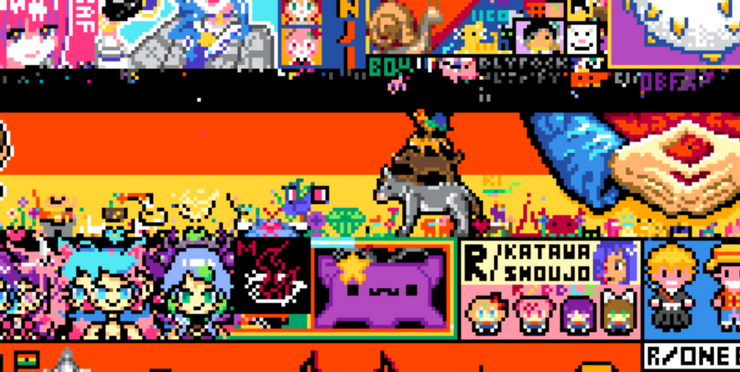 Given just how compact and cluttered the r/place canvas is, this is a brilliant idea for a hidden object game, although some of the more eye-catching memes on the mural can make this game slightly easier. In one of my rounds, I had one where the snapshot is taken right at the centre of the TotalBiscuit’s iconic “LUL” twitch emote, which is very prominently displayed at the centre of the canvas. Then there’s the fact that this iteration of r/place—the first one was in 2017—is larger than the first, which means that there are more spaces for communities to insert images, memes and random anime girls into tiny nooks and crannies on the canvas, and thus more things to look out for. Good luck if your snapshot is one of these.

At the same time, the 2017 version of the canvas is also available for your object hunting needs in r/place guesser too. This does make the search just a little easier, since there are fewer details to look out for.

You can play r/place guesser right here. If you can’t get enough of r/place, there’s also another place you can explore the recent canvas in greater detail: Minecraft, thanks to the effort of another Redditor.