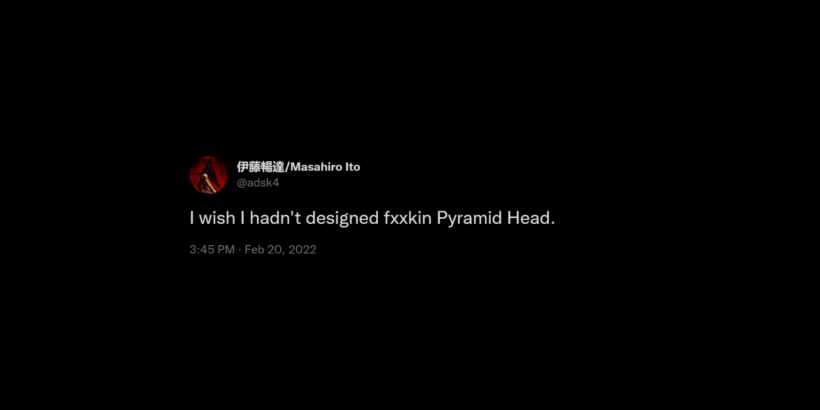 Someone has bought the Silent Hill website domain after Konami let it expire.

It's been a long time since new Silent Hill content has been released, with the most recent game in the series being Silent Hill: Downpour in 2012 (the less said about Silent Hills and PT the better, it's too early on a Sunday to start crying). Just in case you wanted a reminder of how little Konami has done with the series since then, it turns out that it's let the Silent Hill website domain expire.

That's not all, though. Not only did the website expire, but someone has bought the domain and is now using it for memes. Heading over to the Silent Hill website shows that the page is now called "He Was First" and displays a single image. The image is a screengrab of a recent tweet from Masahiro Ito, the artist behind Silent Hill, saying, "I wish I hadn't designed fxxkin Pyramid Head".

Although the Tweet being from last week implies that the domain has only recently been purchased, ResetEra members are claiming that the website domain has actually been up for sale since 2019 and that whoever bought it must have up to $10,000 for it. Others have been quick to remind that Konami doesn't actually use the Silent Hill domain anymore, and instead has a separate portal that leads to a page on its website.

The website has also reportedly been active over the past few years, doing much the same it is here and just featuring memes based on Silent Hill. It's not clear exactly when the website was bought, but it's come back into the public eye thanks to the recency of the featured Tweet and the power of social media. Oh, and the tears of Silent Hill fans.

As much fun as the website is, considering that Konami owns the IP associated with the represented series, it probably wouldn't be all that hard for it to reclaim the site. It might be more depressing to think of it like that and realise it simply doesn't have anything to do with Silent Hill at the moment.